The 2021 highs for the British Pound might have already passed, according to new forecasts from Bank of America.

The latest global economic and financial briefing from the multi-national bank shows that Sterling's levels against the Euro and Dollar are currently above where the UK currency is likely to end 2021, and indeed the first half of 2022.

The findings will come as disappointment to readers holding out for further advances in the Pound of the same magnitude as those seen in the first three months of the year.

"The easy gains had been made," says Kamal Sharma, Bank of America Director of G10 FX Strategy.

With just two more trading days left in August the British currency looks set to record a monthly loss against the Euro, largely courtesy of the +1.0% loss registered over the second half of the month.

Against the Dollar, the Pound is down 1.30% in August.

Pound Sterling Live have reported over recent weeks that the Pound is becoming more responsive to global factors than it is to domestic ones, tending to suffer when stock markets lose their upside momentum.

And it is this global influence that will remain in charge of Sterling for some time yet, according to Bank of America.

Sharma says investors have tended to favour the 'safe haven' currencies of the Swiss franc, Yen, Euro and U.S. Dollar over the past month thanks to rising investor fears about the global economic outlook.

"The resilience of GBP has been welcome but the recent deterioration in market sentiment is a near-term risk," says Sharma. 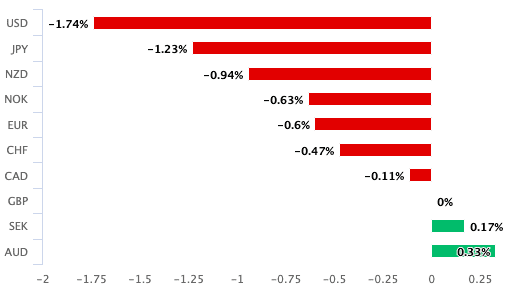 Above: The Pound is one of the laggards of the past month.

Bank of America says concerns over global growth dynamics (particularly those in China) are currently exerting a large influence on currency markets.

"The continued downturn in China data and broader reflation metrics helps to square the circle of the negative relationship between USD and US yields. Within this framework, high beta FX underperformance versus low beta should continue and GBP is unlikely to be an exception," says Sharma.

Bank of America forecast the Euro-Pound exchange rate to be at 0.86 by year-end, a point target they maintain right through to the end of June, 2022.

This gives a Pound-to-Euro exchange rate target of 1.1628 for the forecast horizon.

The Pound-to-Dollar exchange rate profile held at BoFA shows 1.34 by year-end through to June 2022.

Looking at the near-term outlook, much will depend on Friday's speech from the U.S. Federal Reserve Chairman Jerome Powell.

Powell will address the Jackson Hole conference at 15:00 BST where he is expected to touch on the outlook for U.S. monetary policy and the outcome could set in place the trends for the following week.

Markets are wanting him to directly address the Fed's plans for reducing stimulus (tapering its quantitative easing), but as we have reported here, investors might come away disappointed as the Fed has over recent years tried to steer away from major policy issues at Jackson Hole.

Nevertheless, any surprises, or simple post-speech position unwinding, could shift the Dollar and the rest of the FX market, the Pound included.

A positive outcome for the Pound would see the Powell warn that the outlook for the U.S. economy has deteriorated somewhat over the course of the past month owing to the rise in Covid cases.

If investors believe the Fed is not ready to start tapering in November we could see global equity markets rise, taking the Pound up against the Dollar and Euro alongside.

But any commitment to a September taper could work against markets and the Pound.

"A hawkish surprise (an earlier tapering announcement/timeline) would imply a prompter schedule for rate normalisation and a potential rebound in US real yields, which could keep the dollar supported," says a weekly currency briefing note from Barclays.

"However, we think that the bar for a significant pull forward of the hiking cycle remains high in the current environment of rising global growth concerns," they add.

"We expect the dollar to find some support if Powell simply endorses the prospects of a fall tapering as the Delta-variant impact is somewhat downplayed," says Francesco Pesole, FX Strategist at ING Bank.

The Pound would also be at risk of losses against the Euro in this instance.

"The higher sensitivity of GBP compared to the EUR to market risk sentiment has driven EUR/GBP marginally higher," says Pesole.

Pesole says for today the the risks for Pound appear still slightly skewed to the downside against the Euro "if the Fed confirms imminent tapering, which could ultimately take a toll on activity currencies more than on funding currencies".

Pesole says we could witness a break below 1.1627 in GBP/EUR today, but adds that he does do not see any strong fundamental base to drive the pair sustainably lower for now.