In a regular monthly foreign exchange forecast briefing note, HSBC analysts say "the outlook for GBP is not promising, in our view, given the broader underlying flow dynamics."

A consensus expectation amongst most foreign exchange analysts we follow - and indeed this was reflected in consensus forecasts compiled by Reuters and Bloomberg - was that the Pound would rally higher in relief following the signing of an EU-UK trade deal.

However, the price action across the Pound exchange rate strip following the December 24 agreement has been lacklustre.

The Pound has had a mixed 2021 thus far, with a 0.70% gain against the Euro being banked and a 0.18% gain against the U.S> Dollar. The currency has meanwhile lost ground to the Norwegian Krone, Australian and New Zealand Dollars. 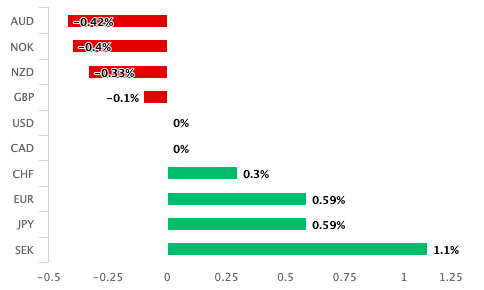 Those bullish hopes the market might have had for Sterling following the signing of an EU-UK trade deal appears to have rested on a potential reversal of long-term underweight positioning, says HSBC.

Although equity investors may be underweight on the UK and even if the UK sees larger portfolio inflows, "it is not clear this would support GBP," says Paul Mackel, Head of Foreign Exchange Research at HSBC.

Valuations on UK-focussed stocks are close to record lows and positioning depressed, with UK stocks said by Bank of America to have underperformed their EU counterparts by more than 20% since the EU referendum.

The GBP/USD exchange rate has meanwhile declined by 8.0% in this same period.

"After a challenging few years, there has been a growing sense that underweight positioning in UK assets will be unwound this year, ushering in a new dawn for GBP," says Mackel.

"We find little reason to be cheerful about GBP in 2021 and believe it will be a G10 underperformer alongside the USD," he adds.

But it is not just HSBC who are sceptical of a major repricing in Sterling and UK assets now that the post-Brexit trade relationship with the EU has been resolved.

Analysts at Bank of America have looked at the cheapness of UK assets relative to EU and US peers, as well as British Pound exchange rates which are are notably lower than where they were prior to the June 2016 EU referendum result.

"This raises the question of whether there is a meaningful Brexit discount priced into UK assets that is set to be unwound with Brexit safely behind us, paving the way for meaningful UK asset price upside," says Kamal Sharma, FX Strategist at Bank of America.

HSBC say their studies of market positioning data across different assets do not suggest an overwhelming underweight stance towards the UK.

"Measures of FX positioning point to long GBP holdings or, at worst, neutral levels of exposure to the currency," says Mackel.

"In bonds, foreign investors have maintained their healthy appetite for UK gilts in recent years. UK equities do show signs of a sizeable underweight by global investors. However, there is limited evidence that this will drive GBP strength," he adds.

HSBC studies say that any inflows into UK assets might not necessarily be as supportive of Sterling as some might initially assume, particularly if equity exposure is hedged (i.e. GBP will be sold to hedge against the GBP value of assets purchased). Furthermore, from a current account perspective, "the build-up in external liabilities generates subsequent outflows on the income side of the current account," says Mackel.

Above: Sizeable deficit on the UK’s International Investment Position, image courtesy of HSBC.

A sizeable headwind for Sterling would be if the debt issued by the UK was unable to attract sizeable investments flows.

"It may become harder for the UK to attract such large debt inflows given some of the benefits of investing in GBP have softened in recent years. Most notably, the yield spread of GBP over its reserve currency peers (USD, EUR and JPY) has fallen close to zero in recent years," says Mackel.

The problem will only become more acute if the Bank of England considers cutting interest rates to 0% or below, has been the market's suspicion for months now. 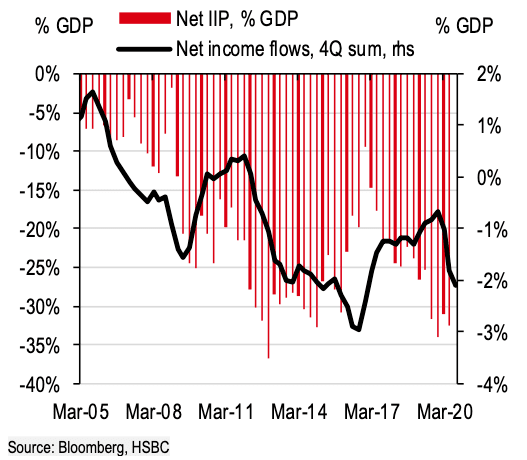 "It is hard to make an argument that the UK should see much greater inflows given positioning is already somewhat elevated and the yield advantage is no longer as positive a force as it used to be. This may be especially true if the Bank of England leans towards negative rates, which we cannot rule out in light of the latest economic restrictions imposed on the UK," says Mackel.

HSBC maintain a view of Pound Sterling as an underperformer in the G10 space in 2021.