The euro exchange rate complex has come under pressure over recent sessions owing to actions taken in Eurozone bond markets by the European Central Bank.

Those holding out for higher euro conversion rates will be disappointed they did not act when they had the chance. However, you would be forgiven for any mis-timing in your decision making as the currency markets continue to be driven by seemingly unfathomable forces at present.

What is Pushing the Euro?

For the euro one thing is of importance at the present time - the price of Eurozone government debt. In particular, German bund prices appear to be having a direct influence on the moves in the euro.

Just look at the following graph which compares moves in the euro to dollar rate and the price of German bonds: 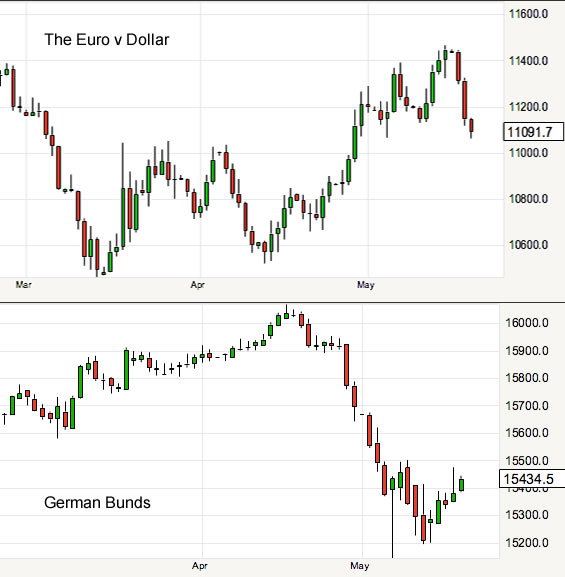 As we can clearly see, when the price of German bonds go down, the euro goes up in value. It appears that the recent rise in bond prices has in turn hit the euro and undermined the recovery we have seen over recent weeks.

Driving the moves in bonds are the ECB which continues to pursue a programme of buying German, and other government, debt under its quantitative easing programme. The most recent rise in bond prices came after ECB executive board member Benoit Coeure said the ECB is aware that there generally are fewer bonds trading in the market from mid-July through August.

As a result, “the eurosystem is taking this into account in the implementation of its expanded asset-purchase program by moderately front-loading its purchase activity in May and June,” say Citigroup. In short - the ECB is able to step into the market and buy bonds ensuring their prices head higher.

“We believe that every 1% rise in EUR is equivalent to 16bps of tightening. Bottom line the ECB may not like 1.15 EUR/USD,” say Citigroup implying that perhaps the ECB are engineering an exchange rate weaker than 1.15.

That said, Citigroup say there still is a chance investors may reduce short positions in the EUR as the Eurozone's economic data improves, as such EUR/USD may rise to 1.15-1.17 for the coming 0-3 months. We feel that such a move higher in the euro dollar exchange rate will depend largely on whether US economic data continues to disappoint. If US data improves then we could well see an extension of the broader EUR move lower.

“In the medium and long term, Since the ECB may keep weak euro policy to support inflation, the EUR may test lower to 1.00 for the coming 6-12 months,” say Citi.