The Euro-to-Dollar exchange rate's dip below 1.17 marks a significant milestone in the U.S. Dollar's current onslaught and we hear from analysts that the trend is unlikely to be broken in the near-term, based on the relevant technical chart setups and fundamental drivers at play.

"EUR/USD dropped below 1.17, and a move to the previous lows set between 1.16-1.1615 is possible," says Georgette Boele, Senior FX Strategist at ABN AMRO.

The break below 1.17 took place on Wednesday and the pair is located at 1.1670 at writing, meaning dollar buyers are facing their weakest purchasing power since November 20, 2020.

"EUR/USD is in the grip of a strong technical downtrend with the pair on course to reach 1.1450 before the end of this year," says Jeremy Boulton, a Reuters market analyst. 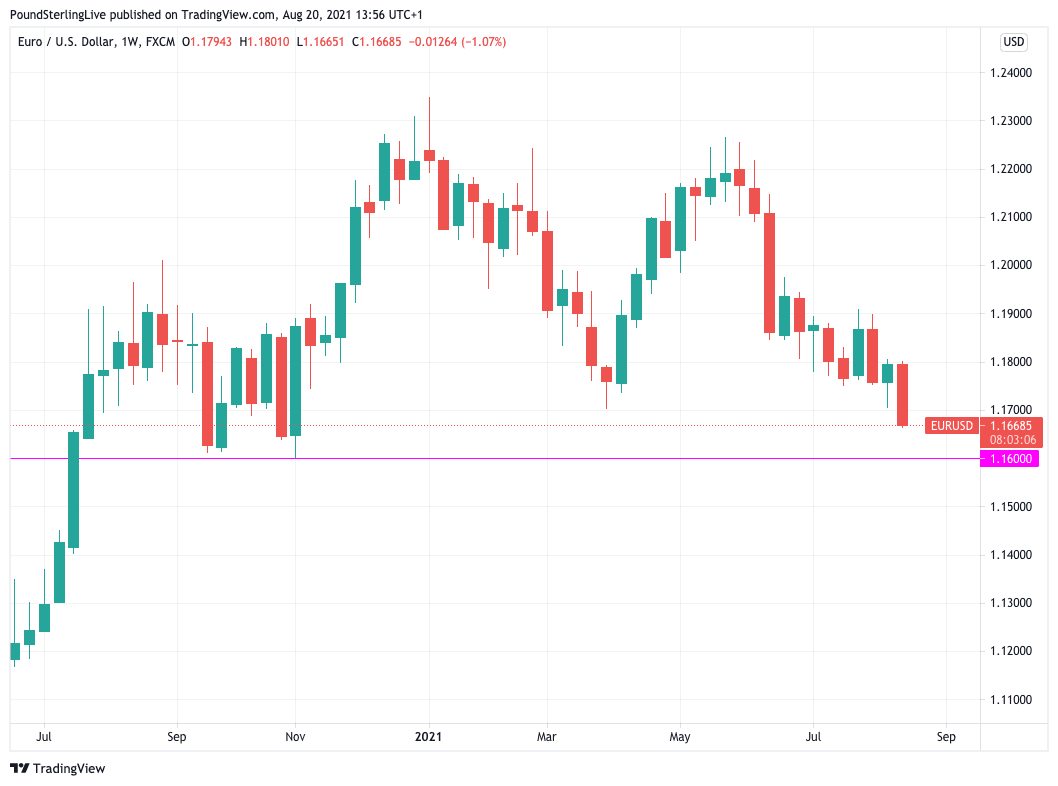 "Nervousness about the spread of the Covid Delta variant, a deterioration in investor sentiment, and expectations for less accommodative central bank policy have been the main drivers," says Boele of the fundamental drivers of EUR/USD downside.

The "less accommodative central bank policy" does however refer to the U.S. Federal Reserve and not the European Central Bank (ECB) which is likely to maintain 'easy' policy settings for many months yet, a fundamental headwind to the single-currency.

This divergence provides a fundamental narrative for ongoing Euro underperformance relative to the Greenback.

"The September ECB vs FOMC meeting contrast is likely to be stark, with Lagarde in no mood to encourage taper talk. Hence any near term EUR/USD pops back to say 1.1750 should attract fresh shorts, sighting the 1.1600 area which provided support in Sep and Nov 2020," says Sean Callow a strategist at Westpac.

The divergent policy stance at the two central banks is reflected in the yields offered on German and U.S. government bonds, a key driver of capital flows.

"A sustained move in the 2 year US Treasury vs Germany bund spread began in June and has barely paused since, chipping away at the euro," adds Callow. 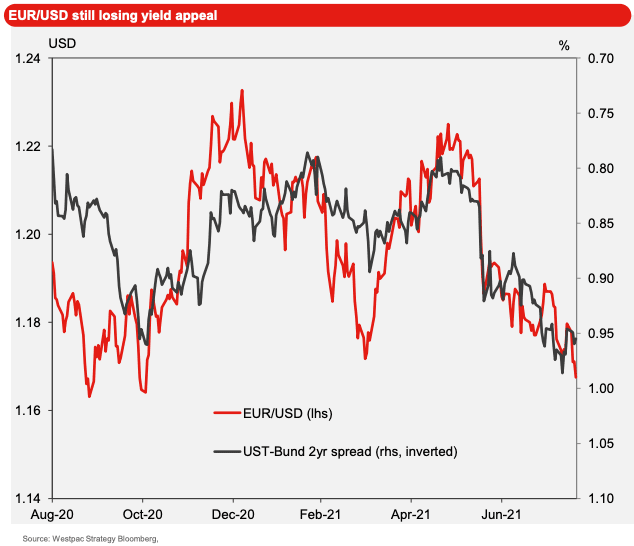 For the Euro to find support the spread between the two regions would need to at least stabilise and then shrink.

For this a delay to the Federal Reserve's planned 'taper' of its quantitative easing programme is the most realistic development, considering the ECB narrative is so resolutely fixed on maintaining accommodative policy.

The taper would see the Fed announce it is scaling back its quantitative easing, a necessary step ahead of that interest rate rise.

Delay the taper and you essentially signal a delay to raising rates, which all being equal in the Eurozone could push the German-U.S. yield spread back in the Euro's favour.

Expectations for the announcement of a taper is expected to come at the September policy meeting and a delay to November could disappoint Dollar bulls.

"Going forward, the FX market will remain most sensitive to guidance in relation to the tapering of QE by the Fed with our bias favouring the dollar remaining supported through to the next FOMC meeting in September," says Derek Halpenny, Head of Research, Global Markets EMEA and International Securities at MUFG.

A delay to the U.S. Fed's taper could be prompted by any concerns that the outbreak of the Delta variant in the U.S. is slowing U.S. economic activity, particularly job creation. With many states seeing hospital ICUs reaching capacity this outcome is a possibility.

Looking ahead, Boulton says that for Euro-Dollar the 1.1450 area is of major importance as it was the breakpoint for the big EUR/USD rally that began in July 2020 which reached 1.2349 this year.

"Should it be seen again traders will probably be short, heightening the chance it is the end point for this decline," says Boulton.