The Euro-to-Dollar exchange rate has defied gravity thus far in July with the aid of nearby technical support levels, but its resilience could be tested through the rest of this week as investors weigh the implications of important data emerging from the U.S. and China.

Europe’s single currency showed resilience when being quick to recover from last week’s brief slide below the 1.18 handle, which came after Germany’s ZEW survey and the Institute for Supply Management services PMI provided a strong indication that European and U.S. economic recovery momentum may have topped out in June.

But the Euro-Dollar rate’s resilience could be tested this Tuesday by the outcome of U.S. inflation figures for June, due out at 13:30 London time.

If they or Wednesday’s 17:00 testimony from Federal Reserve (Fed) Chairman Jerome Powell lend support the idea that bank is likely to wind down its 120bn per month quantitative easing programme and lift interest rates sooner than had previously been suggested.

“We think EUR/USD should remain range-bound in the near term, possibly with a downward bias given the confirmation in the FOMC minutes that the tightening timeline is sensitive to higher-than-anticipated inflation,” says Zach Pandl, co-head of global foreign exchange strategy at Goldman Sachs.

“We continue to expect EUR/USD to drift higher into the end of the year as global growth firms and the ECB makes its own steps toward tapering bond purchases,” Pandl adds in a Friday research note. 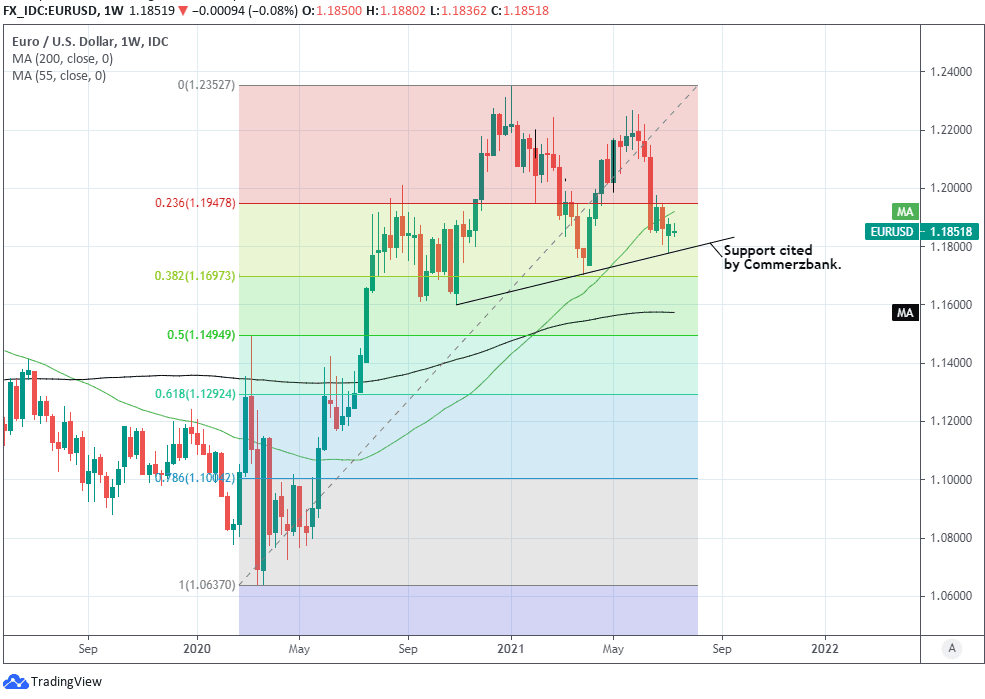 Above: Euro-Dollar rate shown at weekly intervals with Fibonacci retracements of 2020 recovery and upward sloping trendline cited by Commerzbank.

Economists are looking on average for the annual inflation rate to decline from 5% to 4.9% for last month, and for core inflation to decline from 4% to 3.8%, which might support the Fed’s idea that recent above-target price pressures are “transitory” and so do not merit a monetary policy response.

But if elevated or rising inflation leads the market to favour the idea that price growth is less transitory than perceived by the Fed, and that its 2% average inflation target is likely to be met sooner than previously thought, then it could incite demand for the Dollar and test the resilience of the Euro.

Likewise with Wednesday’s Congressional testimony by Fed Chairman Jerome Powell, although technical analysts at Commerzbank say the single currency benefits from technical support around 1.1777 and that any downside seen over the coming days is likely to be limited.

“On the daily chart, rallies are indicated to be corrective only and should struggle around 1.1880/1.1945,” says Axel Rudolph, a senior technical analyst at Commerzbank.

“We note the 1.1777 support line below the market and currently are looking for a rebound. We suspect that the downside is in fact quite limited,” Rudolph adds.

Rudolph and the Commerzbank team have cited negative divergence between the EUR/USD exchange rate and its relative-strength-index (RSI), where the RSI indicated a potential reversal higher by the Euro, for anticipating a rebound that has played out thus far in the new week.

Last week’s rally back above the round number of 1.18 enabled the Euro to reach 1.1880 by Monday and the location of technical resistance which Commerzbank cites as a short-term roadblock for the single currency.

The rally played out as the European Central Bank (ECB) announced the long-awaited results of its monetary policy strategy review and a new, higher inflation target, which may have been less aggressive than some in the market had anticipated and so also supportive of the Euro. 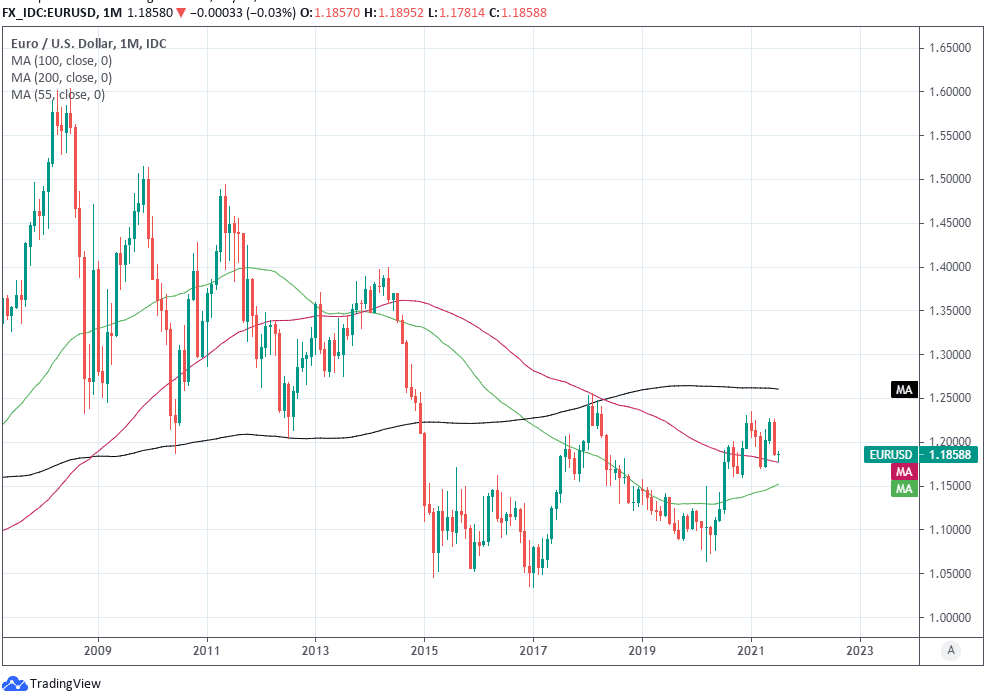 Above: Euro-Dollar at monthly intervals with 100-month average support at 1.1771.

Appetite for the Euro and others could be tested again on Thursday however, by second-quarter GDP data and June’s industrial production as well as retail sales figures from the Chinese economy, which is believed to be slowing following a full year of recovery from its initial experience with the coronavirus.

Consensus anticipates an annualised 8% increase in GDP for last quarter, which is ahead of the government’s 6% growth target for 2021 and relates to a period in which coronavirus containment measures and official interventions aimed at addressing “financial stability” risks weighed on activity.

The danger is that either GDP data or the retail sales and industrial production figures lead to wider spread concerns about the outlook for the global economy, potentially undermining appetite for currencies like the Euro.

However, investors' responses to any bad data emerging from China could be contingent on whether or not they see it as likely to lead to further stimulus from authorities in Beijing given how last Friday’s decision to support lending to firms and households, by relaxing bank capital requirements, lifted risk appetite and the Euro.

“We remain more constructive than most on global growth, on Chinese policymakers’ attentiveness to downside risks, and on EM ex-China activity given an accelerating and ahead-of-schedule vaccine rollout,” says Goldman Sachs’s Pandl.

“Tactically, however, while there have been some signs of stabilization since mid-week, we expect the trading environment to remain choppy, as concentrated positions continue to unwind, and EM FX remains sensitive to incoming data and Fed communication.”