The Euro-to-Dollar exchange rate (EUR/USD) suffered a 107 pip decline ahead of the weekend which represented the pair's biggest one-day fall since April 2020 and analysts say the sharp decline amounts to a confidence shock which has dented near-term upside potential.

The Dollar rose against the majority of G10 currencies through the back end of the previous week, aided higher by the rise in yields paid on U.S. government debt, most notably the yield on ten-year U.S. government bonds.

How the Dollar, and EUR/USD by extension, trades over coming days could therefore depend on how the U.S. fixed income market behaves.

"U.S. Treasury yields have come down from last week’s highs. The USD is weaker against major crosses," says Christian Gattiker, Head of Research at Julius Baer, in a briefing to clients of the Swiss bank on Monday. 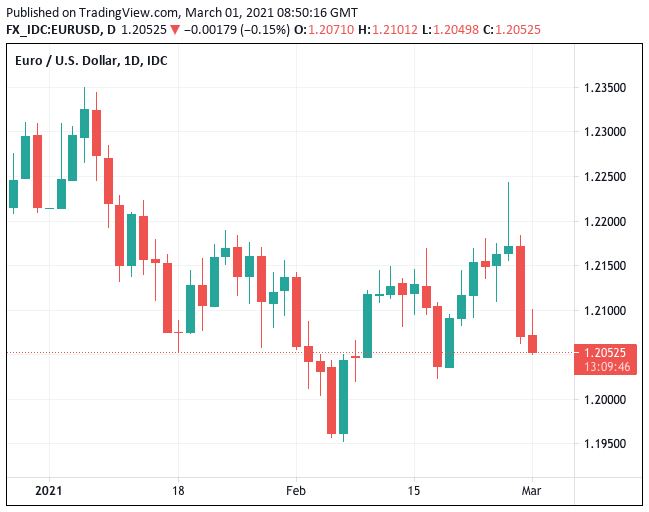 The yield paid on bonds that mature in ten years has risen in most major economies as investors anticipate higher inflation rates in the future courtesy of a recovering global economy. Investors sell bonds as inflation expectations rise and demand a greater compensation in the form of yield for holding such bonds.

But this in turn pushes up financing rates for businesses, prompting the selling of stocks.

The rise in the U.S. ten-year yield has meanwhile been more rapid than in other countries as investors see the U.S. economic recovery as being more durable and advanced, particularly owing to expectations for a substantial aid package from the Biden administration.

This has in turn pushed the Dollar higher over recent days.

"As a disorderly UST sell-off remains the key risk for markets, the focus will be on the series of Federal Reserve speakers this week (including Chair Jay Powell on Thursday) and whether they express some concern about the UST decline," says Pesole.

Karen Jones, Team Head of FICC Technical Analysis Research at Commerzbank says EUR/USD has once again failed at the key technical level of 1.2190.

"EUR/USD last week attempted to break higher but failed to maintain the move up and as a consequence it starts this week on the defensive with attention on the 1.2037 uptrend and the September high at 1.2014 and this guards key short term support, which lies at 1.1945, this is the 23.6% retracement of the move up since March 2020," says Jones.

"It would also represent a return to point of break out from the previous 12 year downtrend," she says. "Only a break back above 1.2243 would imply a retest of the 1.2349 6th January high".