The Euro-to-Dollar rate held above the 1.17 handle in a show of resilience Friday after being lifted by the revelation that President Donald Trump has contracted coronavirus and as one-off factors were seen to be behind a worse-than-expected set of Eurozone inflation figures for September.

Eurozone inflation fell deeper below zero in September, Eurostat revealed in the final session of the week, with the consumer price index falling from -0.2% to -0.3% when markets had looked for an increase to -0.1%.

Meanwhile, core inflation fell to just 0.2% from 0.4% previously and against expectations for a reading of 0.5%.

Economists had hoped last month would mark the bottom for Eurozone price pressures but brightening expectations were undermined by falls in energy prices and non-energy industrial goods, which more than offset modest increases in food, alcohol, tobacco and services inflation.

On the face of it new lows for inflation should have been bad news for the Euro given the European Central Bank protested through September of strength in the single currency and impact that it could have on the odds of its “close to, but below 2%” target being achieved over the coming years. But the Euro overlooked the data.

“This has been caused by a smorgasbord of temporary factors though, although all of those together do add to the risk of inflation staying lower for longer. The German VAT reduction is responsible for a significant part of the downward pressure, which is of course a transitory effect, and energy prices also continue to contribute,” says Bert Colijn, a senior economist at ING. 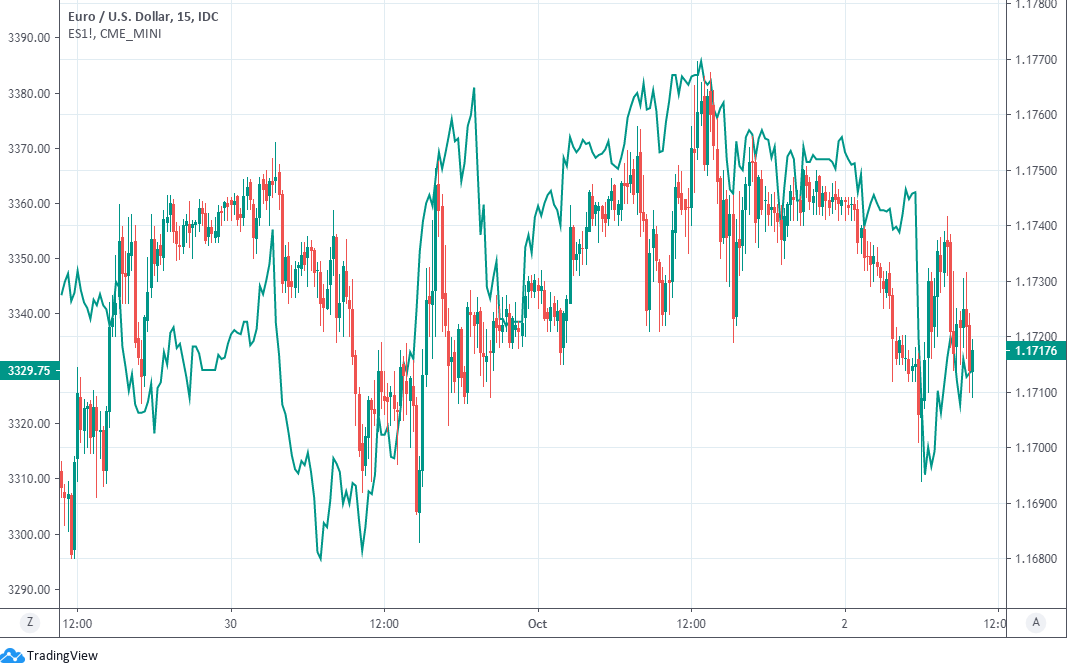 Eurozone finance ministers are expected to discuss strength in the single currency in an October 05 meeting while the ECB warned on Monday that it will continue to watch the exchange rate closely. However, strategists at Credit Agricole CIB say the bank “will struggle” to contain the Euro this year and next.

Europe’s single currency entered the Friday session carrying an intraday loss but pared its decline as stock markets fell and the Dollar went into reverse when President Donald Trump said he and his wife have contracted the coronavirus. The White House incumbents now face a minimum 10-day period of quarantine even if he doesn’t go on to develop symptoms, which has cast a cloud of uncertainty over the timetable leading up to the November 03 election.

"Is this a prelude as to the market reaction if Biden wins? The bias is still to be long, as we still believe in a weaker USD, but risks certainly seem a little more two way here,” says J.P. Morgan's London dealing desk. “Covid-19 concerns in Europe, European data that is showing signs of fatigue and lack of a Brexit breakthrough are all headwinds for the single currency. We have also had the US stimulus discussions to digest (although I have said many times that I believe a deal before the election is unlikely) and we now have the inevitable headlines regarding Trump’s health to contend with. Still prefer to buy on dips, but would like to see a break above trendline resistance, now at 1.1780/90." 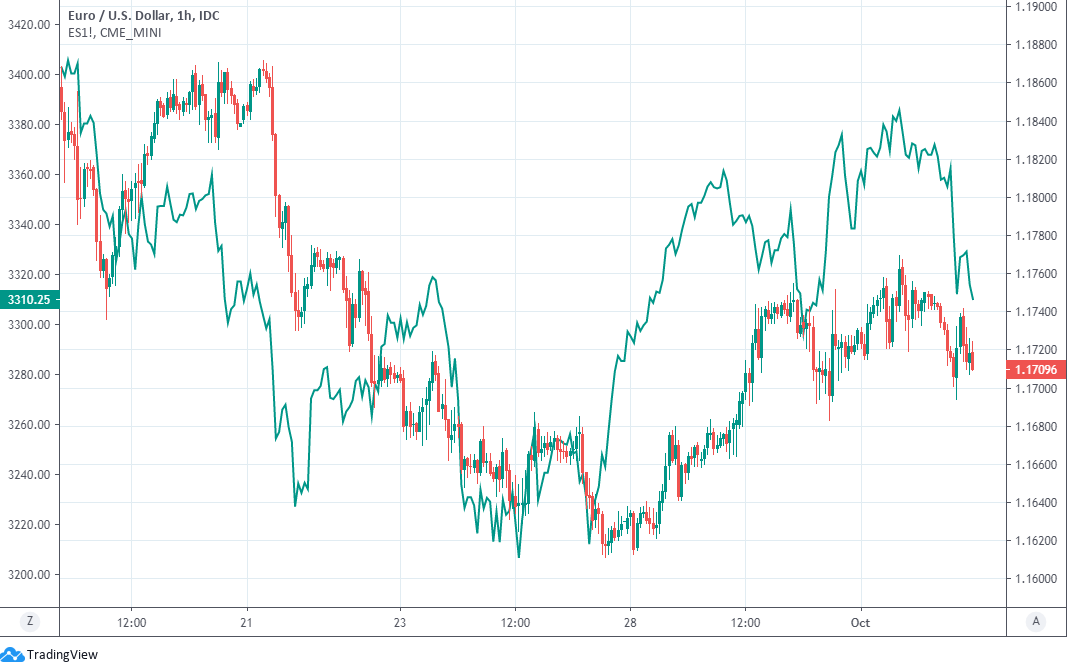 Trump’s statement came via Twitter and as markets fretted about the diminished prospect of a stimulus package being agreed in Washington before the election after the House of Representatives endorsed a package that was larger than anything the White House has so-far been willing to sign off on.

The Euro would be at risk from a surprise Trump victory next month, potentially explaining why it pared earlier losses after the announcement, although the single currency had already put in a resilient performance before Friday when it resisted an attempt by the market to push it below 1.16 on Monday before recovering and holding 1.17 since then.

“On Saturday, UK Prime Minister Boris Johnson will speak with European Commission President Ursula von der Leyen to take stock of negotiations and discuss next steps. EUR/USD is directionless around 1.1700,” says Elias Haddad, a strategist at Commonwealth Bank of Australia. “Without a more aggressive US fiscal thrust, the US economic recovery is at risk and USD is vulnerable to additional upside in the short term. In contrast, we expect USD to underperform mostly against commodity sensitive currencies if US policymakers agree on a new fiscal stimulus package.” 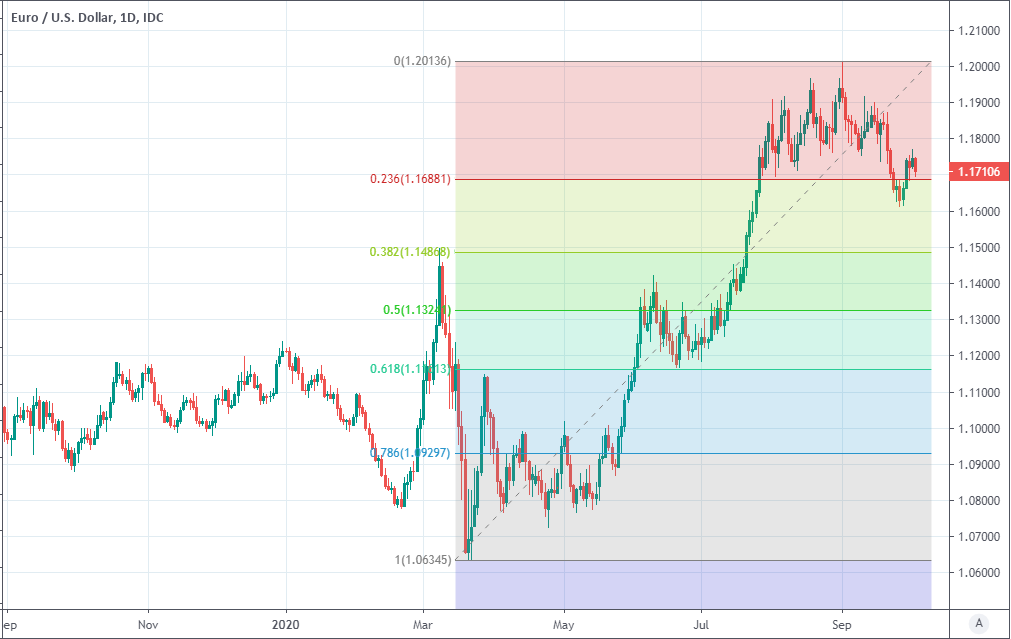