- EUR/USD forecasts now point near to parity by mid-year. 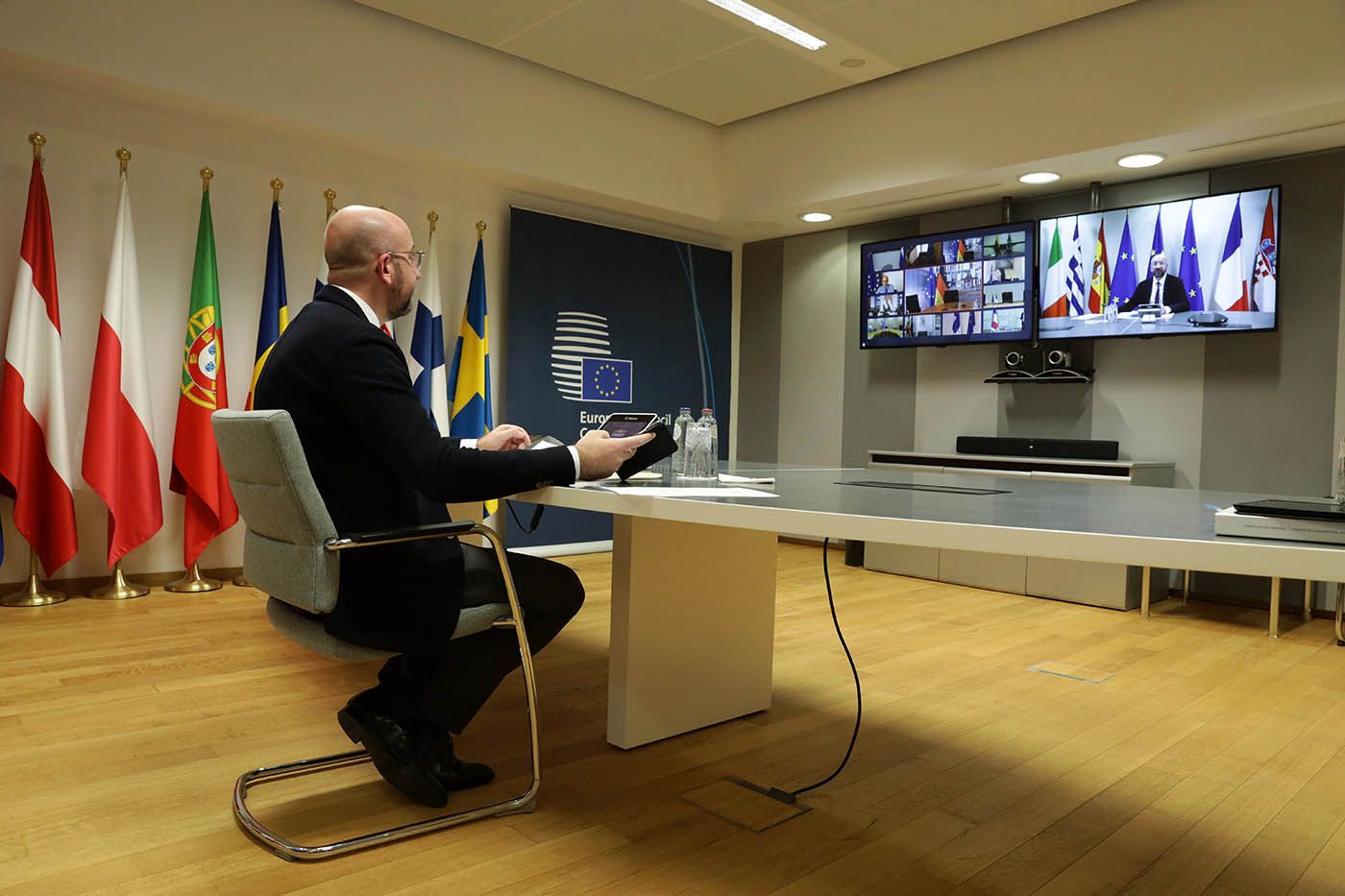 BofA Global Research has downgraded once bullish forecasts for the Euro-to-Dollar rate owing to the coronavirus crisis that's incited the greenback into a savage run on the single currency and all other counterparts this quarter. That Dollar bull run is now expected to continue over the balance of 2020 where before it was anticipated that a European growth recovery and uncertainties about the outcome of the November U.S. presidential election would undermine the greenback and lift the Euro.

"We were already expecting EUR weakness in 1Q, but as COVID-19 became a global pandemic, the downside risks for the currency have increased," says Athanasios Vamvakidis, head of FX strategy at BofA Global Research. "Our FX forecasts now reflect a considerably stronger USD for this year, and a broadly negative risk environment, along with the dismal near-term growth picture. As noted, we now look for EUR-USD to go to a 1.02-1.05-type range."

The Euro-to-Dollar rate had been tipped to rise gradually to 1.15 by year-end, up until Europe became the epicentre of the coronavirus outbreak and efforts to contain the deadly form of viral pneumonia led to governments instructing businesses to close and for citizens to remain indoors as well as avoid social contact. Those containment efforts are now expected to drive historic double-digit falls in GDP over the first and second quarters, and lead to almost equally large increases in spending and debt-to-gdp. 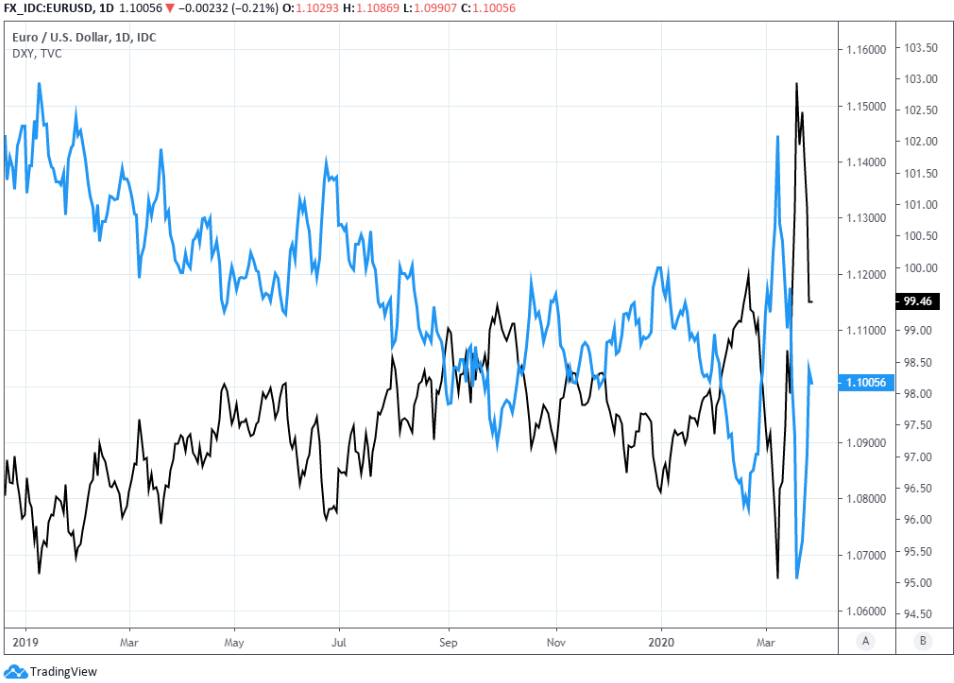 Much like citizens and governments around the world, analysts and investors have been wrongfooted by the coronavirus, a true ‘black swan’ if there ever was one, and one so rare that incorporation of it by anybody into any forecast or expectation would forever be statistically foolish. But with the U.S. Dollar advancing and risk assets like stocks having been some 30% lower until very recently, markets are now nagivating a race track that they've been on before, albeit in unprecedentedly bad weather conditions.

"The inability of the Eurozone authorities to agree on a strong fiscal stimulus, particularly compared with decisive action in the US and the UK, and concerns about Italy's solvency, particularly after Lagarde's unfortunate comment that the ECB's role was not to close spreads, have also contributed to EUR weakness," says Vamvakidis , who now forecasts the Euro will end 2020 at 1.05. "In the short term, whether the aggressive measures that Eurozone countries have taken to contain the virus work or not will be crucial for the EUR and beyond."

A global economic slump that torpedoes risk asset valuations and stokes significant demand for liquidity would favour the Dollar over the Euro in most circumstances and it's this demand for the greenback that's seen as the primary driver of the Euro-to-Dollar rate in the short-term. But the absence of European political institutions from the myriad initiatives to support companies and households through the unprecedented economic stoppage underway on the continent, and elsewhere, is also a burden for the Euro.

European leaders have an opportunity to put long-term Euro upside on the table but if a common solution is still absent when investors glimpse light at the end of the coronavirus tunnel, then the politics of this could become a more acute source of pain for the Euro. Especially if the return of a European voice to the continental fold is marked by a reimposition of the 'stability and growth pact,' which was only recently suspended to prevent it hampering efforts aimed at getting citizens, companies and economies through the crisis. 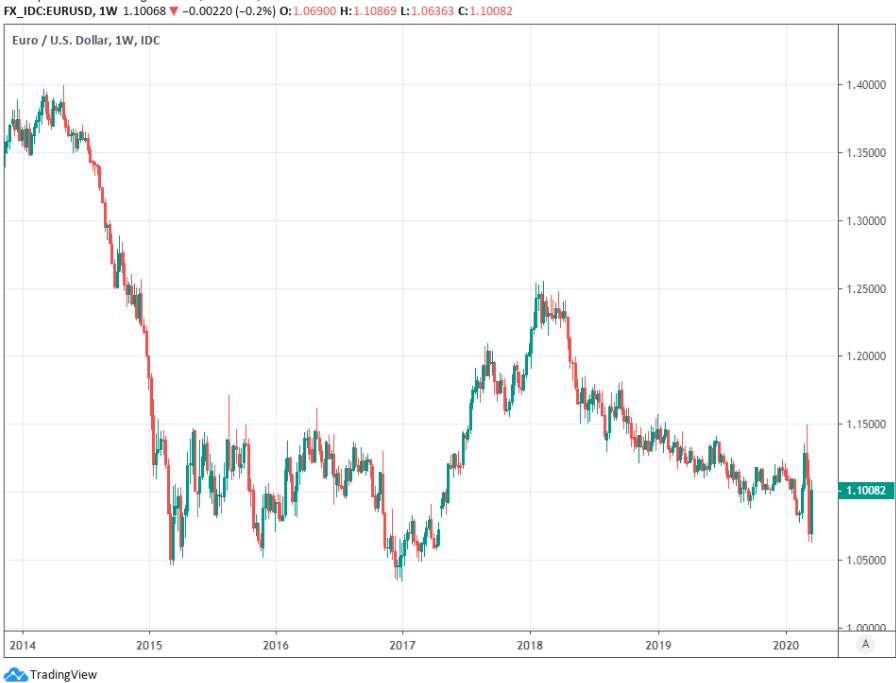 "The crisis in Italy has also rekindled fears about a breakup of the single currency. In an environment with at least a residual focus on self-imposed constraints such as EU budget rules and ECB issuer limits, these fears could well grow further in coming weeks. But if the Euro area decided to view itself as an economic nation state—at least for the time of the outbreak and its aftermath—it would actually be in quite a strong position," says Jan Hatzius, chief economist at Goldman Sachs, in a Monday research note.

The European Central Bank (ECB), long constrained in its ability to aid the economy after a decade acting as the sole lifeboat of the common currency bloc, has spared no effort or expense in attempts to mitigate the economic effect of the coronavirus crisis. But as has increasingly been said by every central banker on the planet in recent years, central banks cannot do all of the heavy lfiting involved in economic policy; a combined effort coordinated between government and central bank is necessary and especially in times of crisis. So far EU leaders have not collectively put anything meaningful on the table.

Commission President Ursula von der Leyen said Thursday that an "ambitious new European budget that will support the EU economy" is necessary to get the EU through the current crisis. Comments came in a statement following another meeting in which national leaders neglected to endorse so-called 'corona bonds' that would enable the EU to augment the crisis-fighting capacity of economically brutalised and fiscally constrained countries like Italy, who've been required by now-suspended stability and growth pact rules to reduce their budget deficits year-after-year ever since the debt crisis.

"The global economy is headed for recession, however a contracting US economy looks set to outperform many areas, in particular Europe, which was comparatively late to contain the virus and is challenged by fiscal policy coordination," BofA's Vamvakidis says. "The ECB has announced more QE, but this is not what is driving the EUR." 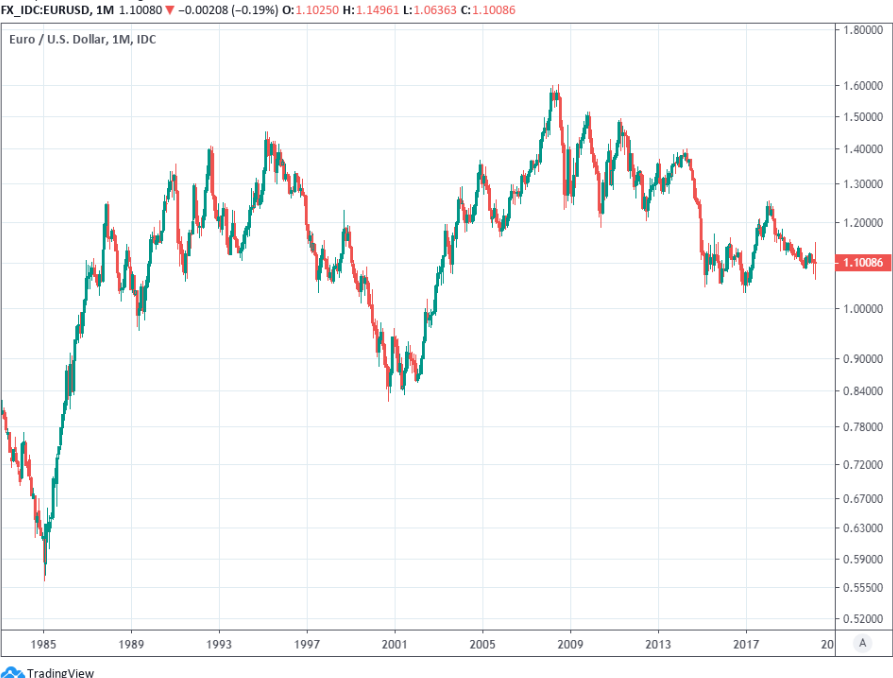 EU fiscal rules have necessitated a decade of difficult decisions and sacrifices by governments, people and countries in order to reduce debt burdens to a level that does not imperil the single currency. Though not all have had to make so many sacrifices. Some had lesser debt burdens to begin with as well as things like valuable trade and current account surpluses - all nurtured by the low level of a Euro currency that would be unlikely to prevail in the absence of large fiscal burdens carried by other countries - and those countries have steadfastly refused to match monetary union with any kind of fiscal union at all until debt burdens on the 'periphery' are substantially eliminated.

It was those same old familiar self-interests that prevented European national leaders from endorsing 'corona bonds' this week and it could be the same interests that compromise the single currency in the months ahead if an absence of 'solidarity' at the coronavirus table leads Italians, Spaniards, Greeks and others to reject the reimposition of the 'stability and growth pact' at the other end of the crisis. Or worse still, begin a political conversation about whether the Euro currency was really such a good idea after all - just ahead of another electoral cycle. Valuable trade and current account surpluses, not to mention the businesses, people and GDP that depend on them, would not be the same if European export prices one day had to be quoted in Deutsche Guilders.

"Focus will likely shift to the large size of the Fed balance sheet expansion, increase in fiscal deficits in DM economies as well as issues around the sustainability of the European monetary union. We believe this will likely lead to debasement concerns similar to the post GFC period," says Jeffrey Currie, global head of commodities research at Goldman Sachs. "As such, both the near-term and long-term gold outlook are looking far more constructive, and we are increasingly confident in our 12-month target of $1800/toz."