The Euro bounced Thursday in response to official figures showing the German economy avoiding a brush with recession in the third-quarter, but there could be more upside ahead because the charts are offering support to the single currency while some of its critics are unwilling to bet against it at current levels.

Germany's economy grew by 0.1% in the third quarter, Destatis said Thursday, when consensus had been in favour of a 0.1% decline. However, the contraction reported in the prior period was revised higher from 0.1% to 0.2%, which could explain why the upward move in the Euro was limited.

Markets had anticipated that a second quarterly contraction would leave the German economy mired in a 'technical recession' but revisions to the prior period's numbers helped Europe's economic engine dodge a proverbial bullet.

The Euro rose 30 points to 1.1012 against the Dollar after the announcement.

"A base effect – the economy’s contraction during Q3 2018 moved out of the annual comparison – helped to nudge up the yoy rate from 0.3% in Q2 to 0.5% in Q3. That is well below its trend rate of c1.5% yoy and substantially lower than the 3.4% growth peak in 2017 Q4. Since then, trade tensions, the Brexit mess and the slowdown in China have taken a heavy toll on Germany’s export-driven and manufacturing-heavy economy. A stabilisation of indicators points to stagnation in Q4 and a modest upside risk to our calls of 0.5% growth in 2020," says Florian Hense, an economist at Berenberg.

A full breakdown of the sectoral contributions to the third quarter result will not be available for another month but the simple fact that Germany's economy avoided another deterioration last quarter is positive for the Euro given the extent to which the European Central Bank (ECB) is testing the limits of monetary policy in order to lift growth and inflation across the common currency bloc. 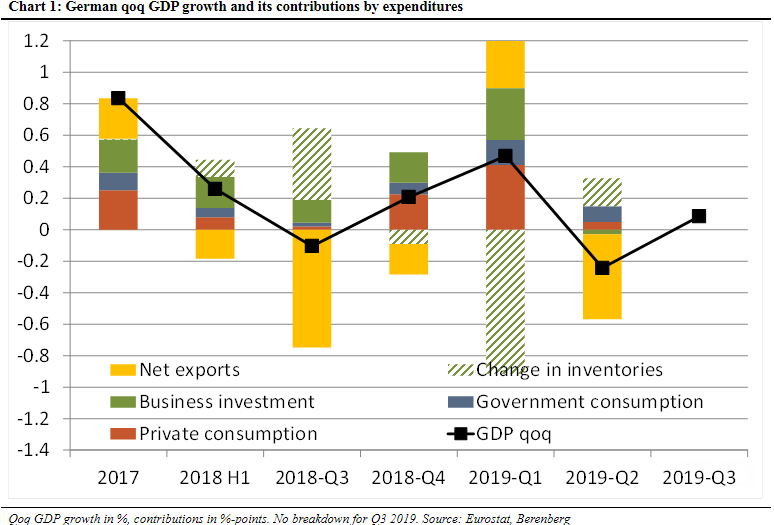 "We had a sense that a small upside surprise was coming in today’s report given the solid September trade data, and upward revisions to the manufacturing numbers towards the end of Q3," says Claus Vistesen, chief Eurozone economist at Pantheon Macroeconomics. "No recession, but most definitely a very weak economy. In some sense, this is the “worst” of both worlds for markets. Today’s data confirm that the German economy has now stalled, but the headlines are probably not dire enough to prompt an immediate and aggressive fiscal response from Berlin."

Germany's economy has sank amid the U.S. trade war with China, which has badly wounded the manufacturing sector, and uncertainty over the UK's exit from the EU. The UK is the largest or most lucrative global market for some products made in Germany including its cars and the prospect of tariffs as well as non-tariff barriers being imposed on goods coming in from Europe after Brexit has long unnerved the country's industrial sector.

"EUR/USD is currently flirting with key support from the 1.1000-level," says Fritz Louw, a currency analyst at MUFG. "Recent leading indicators have provided tentative signs of optimism that the German economy is close to the worst point and could begin to pick up gradually in 2020...the improving euro-zone data flow has not been sufficient to encourage a stronger euro at the current juncture. The ECB’s strong commitment to maintain looser monetary policy for longer continues to dampen upside potential for the euro."

Markets are still hopeful President Donald Trump will reach a 'phase one deal' that ends the trade war with China while Prime Minister Boris Johnson's brexit proposal and the looming UK general election have all-but binned the threat of a 'no deal' Brexit playing out at any point. However, and even though it might take time for the dissipation of those risks to be reflected in economic data, some who're sceptical of the Euro's long term prospects are currently unwilling to bet against the Euro at its present levels. 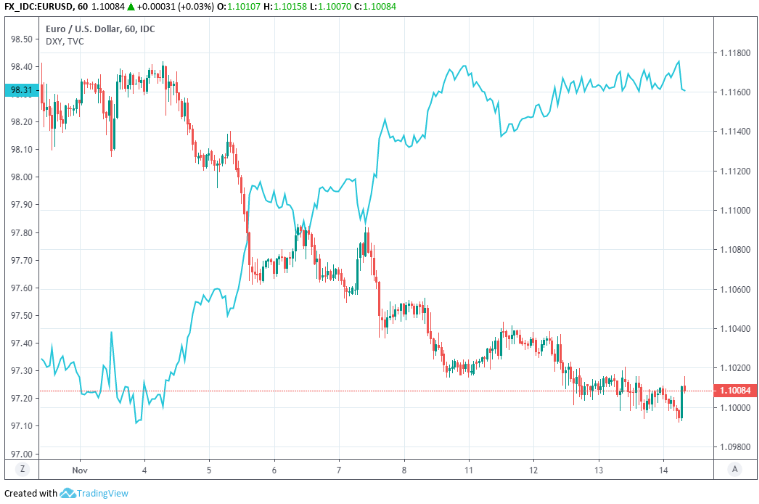 "Lower US yields and upside surprises in Eurozone data have prevented a more convincing move in EURUSD below 1.1000, and we are still patiently waiting for a short entry point in this pair. EUR-USD rate differentials will become more important over the next 24 hours or so, especially with US retail sales data on the horizon. We would either wait for a break of 1.0990 to sell the pair or, failing that, hold out for a better entry level north of 1.1075," says Stephen Gallo, European head of FX strategy at BMO Capital Markets.

The Euro retreated from resistance around 1.1180 on the charts last month even after President Trump announced on October 11 the 'phase one deal' that no longer seems to be the sure thing it was billed as at the time. Recovering U.S. bond yields, driven by the diminishing prospect of more interest rate cuts from the Federal Reserve (Fed), have supported the greenback and kep the Euro-to-Dollar rate on its back foot of late although yields softened this week.

"The move lower has neutralised the chart– it is unclear if the market will recover from here to the 200 day ma at 1.1180 and the top of the channel at 1.1269 (however this is slightly favoured as we suspect the slide lower was just an ‘a-b-c’ correction). Or if we will see one more final leg down to the base of the channel at 1.0865 and the 1.0814 Fibo retracement," says Karen Jones, head of technical analysis at Commerzbank. 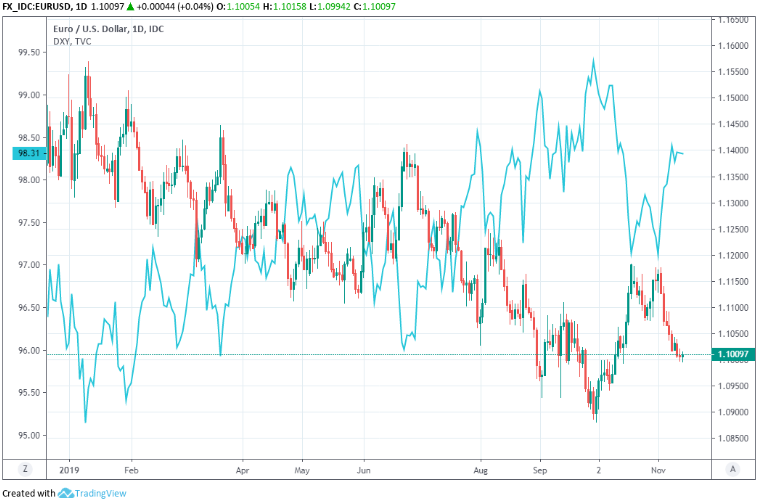 Commerzbank's Jones, who studies trends and momentum on the charts, says the Euro faces an uphill battle to stabilise and recover but that she favours this outcome because of recent happenings on the charts. She says there is strong support at the 1.0990 level, which held in overnight trading, and has opened 'long' positions at 1.10 and 1.1024 which means Commerzbank is betting on an increase in the exchange rate.

She's not alone either because the FX strategy team at Morgan Stanley has cited a number of fundamental reasons this week for why the Euro-to-Dollar rate could slowly but surely grind higher in the year ahead. The bank forecasts the Euro will end the year at 1.15 and that it will then rise to 1.17 before the end of March 2020. It says the single currency could see in the 2021 year while trading around 1.25, a level not seen since the early days of 2018.

"We see potential for a gradual grind higher in EURUSD, but EUR may underperform on the crosses, particularly against higher-yielding, cyclical currencies. As markets trade the global reflation theme, EUR may be increasingly used for funding carry trades as the ECB remains committed to low rates, pushing EUR lower against higher-yielding currencies. However, signs of stabilization in EMU and RoW growth, coupled with a stronger RMB, should weaken the USD broadly, suggesting EURUSD may grind higher gradually," says Hans Redeker, head of FX strategy at Morgan Stanley, in a note to clients.