The Canadian Dollar outperformed on Thursday having notched up gains over all majors including Pound Sterling and may be on course for even further gains, according to multiple forecasters who’ve been cheered by the latest guidance from the Bank of Canada (BoC).

Canada’s Dollar was higher against even the U.S. Dollar in the penultimate session of the week, barely a day after the BoC said it intends to reduce from C$4BN to C$3BN the amount of government bonds it buys each week.

It hinted too that it could raise the cash rate as soon as next year.

Financial markets had largely anticipated the decision to taper off bond purchases, but were unprepared for the guidance on interest rates.

"The more impactful revelation was the guidance around the likely timing of a move on interest rates. Stronger than expected growth (the GDP forecast for 2021 was revised to 6.8% from 5.6%) means the BoC now expects economic slack to be absorbed in H2 2022 rather than the previous guidance of “into 2023”. The BoC is of course not the first G10 central bank to go down this exit path,” says Daragh Maher, Americas Head of FX Strategy at HSBC.

BoC 'hawkishness' has given Canadian Dollar forecasters increased confidence in already-bullish projections for the Loonie. 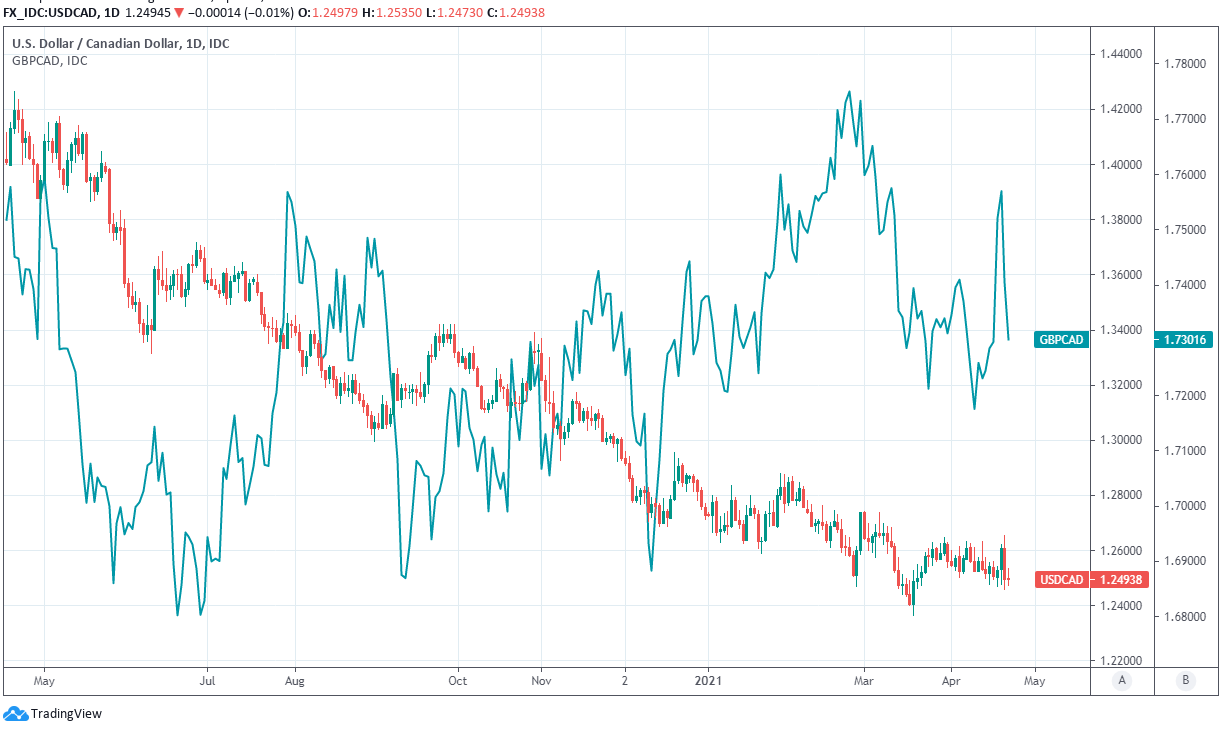 Above: USD/CAD shown at daily intervals alongside GBP/CAD (green line).

Maher says the Canadian Dollar is retreading the footsteps of the Norwegian Krone, which was on Thursday the best performing major currency of 2021 after the Norges Bank guided the currency market to expect its first interest rate rise to be announced before year-end.

Canada’s Dollar has narrowed the gap between it and the Krone since Wednesday’s decision and press conference however, which has placed the BoC ahead of the Federal Reserve (Fed) on the policy normalisation pathway.

The Fed’s current monetary policy settings are a ball and chain around the ankles of the Dollar, given that interest rates are likely to remain near-zero even as inflation rises above the Fed’s 2% target, and support HSBC’s long standing forecast for USD/CAD to fall to 1.22 by year-end.

Meanwhile, Canada’s economy and others around the world are in line to benefit further from the trillions of fiscal stimulus provided by Washington this year alone and the Fed’s newly heightened tolerance for above-target (2%+) inflation.

“We think a push back to the 1.24 area is certainly within reach for USDCAD in the near term and we continue to forecast a drop to 1.23 later this year,” says Shaun Osborne, chief FX strategist at Scotiabank. 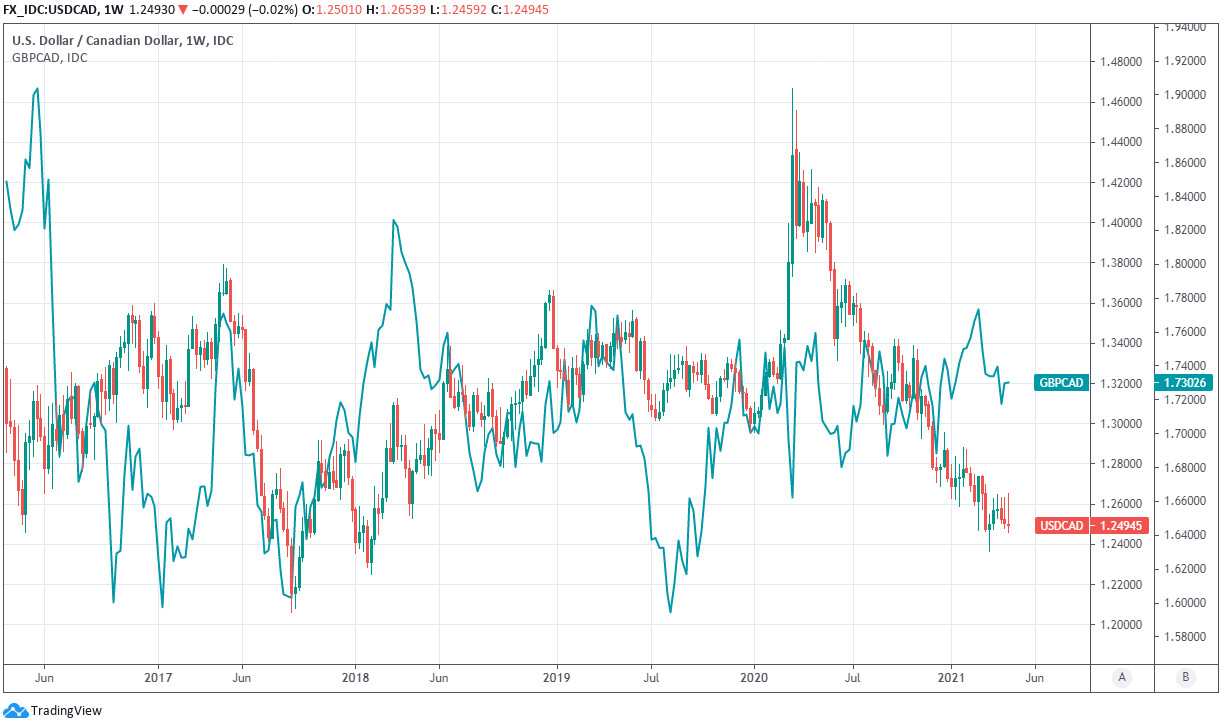 Above: USD/CAD shown at weekly intervals alongside GBP/CAD (green line).

“The risk of a brief, downside overshoot to the 1.20 area remains, however—and has perhaps risen in the wake of BoC developments. We expect the USD to remain well-offered on modest gains for now,” Osborne adds.

Scotiabank cited on Thursday the BoC’s position running ahead of the Fed for thinking the Loonie could trade with a “a broadly firmer manner,” as it aids a relative uplift in Canadian government bond yields.

This could potentially encourage a wipeout of speculative wagers against the Canadian Dollar that were recorded by the Commodity Futures Trading Commission (CFTC) in its latest report and noted by BMO Capital Markets in its latest commentary this week.

The bank had previously said that “tapering before the Fed could easily bring us below 1.2350,” in USD/CAD, which is a level that was almost seen on Wednesday this week and may have grown more likely as the BoC squeezes speculators wagering against the Loonie.

Such a wipeout would enable the Canadian Dollar to catch up with rising stock markets and commodity prices, which it has underperformed in recent weeks.

“It appears that FX investors are in a wacky spot with relation to CAD. Although CAD has been slowly appreciating for months with no sign of a breakdown in the trend, leveraged funds have nevertheless repositioned themselves short-CAD. The pain trade is therefore a continuation in the USDCAD downtrend,” says Greg Anderson, BMO’s Global Head of FX strategy.