Canada's Dollar rose broadly in a show of strength that was eclipsed only by similar showings from the Kiwi Dollar, which may have been aided by an upbeat assessment of New Zealand's economic prospects by the Reserve Bank of New Zealand (RBNZ), and the oil as well as equity-linked Norwegian Krone.

USD/CAD almost tested the round number of 1.25 after sliding below the 1.26 handle earlier this week which, coming as Sterling took a breather from its steamrolling rally, pushed the Pound-to-Canadian Dollar rate back beneath 1.77 as the North American session got underway. 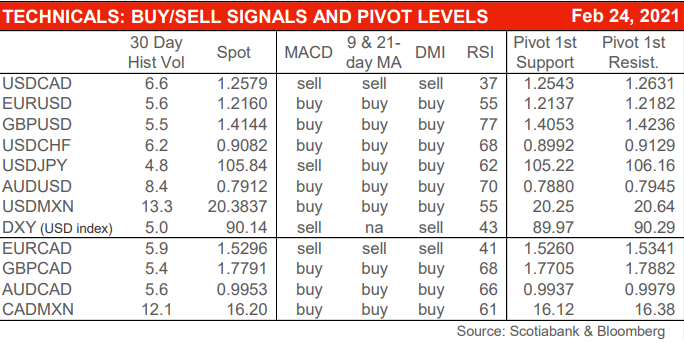 Above: Scotiabank's technical indicators for major FX. Provided for informational purposes only.

Canadian Dollar gains built alongside a recovery in global stock markets and came as West Texas Intermediate crude oil futures rose above $60 per barrel for the first time since December 2019 and before the coronavirus pandemic. Gains followed BoC Governor Tiff Macklem's appearance before the Edmonton Chamber of Commerce and Calgary Chamber of Commerce on Tuesday.

Macklem did not mention the Canadian Dollar or its earlier strength, which had become a source of concern for the bank late last year, and gave no overt hints about the outlook for monetary policy in Canada.

However, clues about the outlook for BoC policy could potentially be inferred from Macklem's remarks on inflation, which came across as somewhat dismissive of the recent market fashion or trend that's seen many fret that pandemic-related monetary and fiscal support would lead to surging prices.

"Unemployment had been around 40-year lows for a couple of years. Based on past economic cycles, we would have expected inflationary pressure to begin to rise. But inflation wasn’t threatening to take off. As the pandemic recedes and the recovery continues, we will keep that experience in mind," Macklem said. 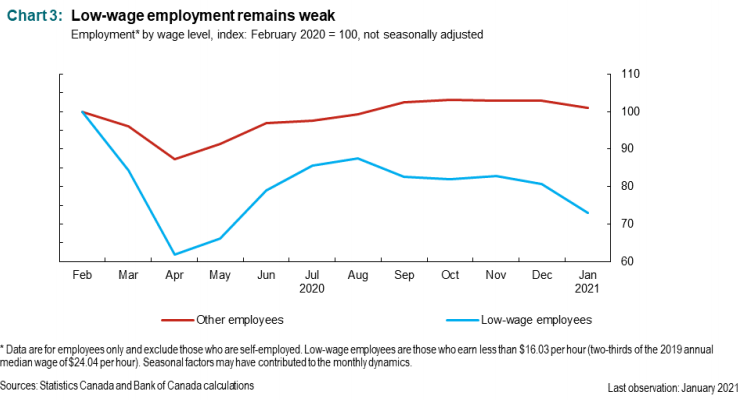 All central banks have expanded their balance sheets at a rate of knots not seen before in order to ensure the orderly functioning of bond markets, while also providing the financing needed by governments for preserving what they can of their economies amid the coronavirus-inspired shutdown. It just so happens that the Bank of Canada has been at the vanguard of this balance sheet expansion, boasting the largest increase in total assets of any central bank.

But just like after the financial crisis, which saw the Federal Reserve (Fed) and Bank of England (BoE) take up with entrepreneurial enthusiasm the quantitative easing policy that had only previously been experimented with by the Bank of Japan (BoJ), it's been fashionable of late for commentators to fret that such perceived largesse will eventually lead to surging inflation reminiscent of that seen in Germany during the earlier part of the last century.

This has in some cases, and most notably in relation to the Fed, led to calls from some pundits and even expectations in some parts for what would be a premature withdrawal of policy support. It's these which Macklem appeared keen to dismiss on Tuesday.

"Two out of the Bank of Canada's three core inflation measures have risen to 2.0% according to the latest data. Macklem, however, seemingly felt compelled to remind everyone that even the 40-year low in the unemployment rate seen pre-pandemic wasn't enough to sustainably drive inflationary pressures to concerning levels," says Royce Mendes, an economist at CIBC Capital Markets. "Keeping those experiences in mind, he said that monetary policy could continue to support demand, essentially implying that it's more important to get Canadians back to work at the moment than worry about a couple of core inflation measures that are heating up." 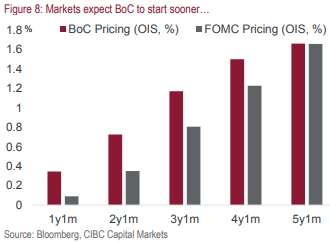 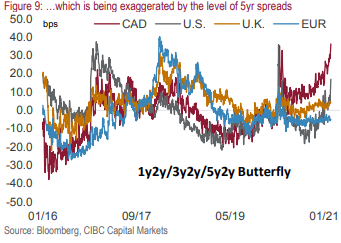 The BoC's views on the inflation matter greatly to the Loonie and in turn, GBP/CAD, but would matter more further out if CIBC Capital Markets is right in its expectation for the next evolution of the bank's policy stance. Especially because, as many have observed, some inflation metrics are rising.

A BoC that remains calm and composed even in the face of inflation readings that are testing its 2% target on some measures hints at a rather bearish outlook for 'real yields' paid by Canadian government bonds.

Meanwhile the drubbing dealt to the U.S. Dollar in the last year illustrates in detail what can happen to currencies when those 'real yields' go tumbling through the floor, which is what would happen if the BoC refuses to budge on interest rates and bond yields even as Canadian inflation expectations rise.

"Of course, that’s a way of telling the market that the Bank isn’t in a hurry to hike rates, but is still too vague for the CAD to move materially," says Bipan Rai, an FX strategy colleague of CIBC's Mendes, of Tuesday's remarks from Macklem. "Other than that, there wasn’t any smoking gun on a possible taper to its QE program (which we still expect to happen at the April meeting)." 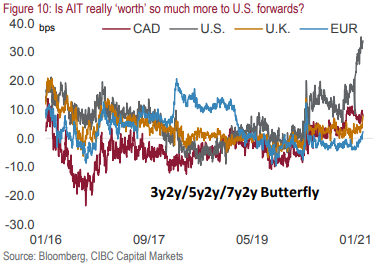 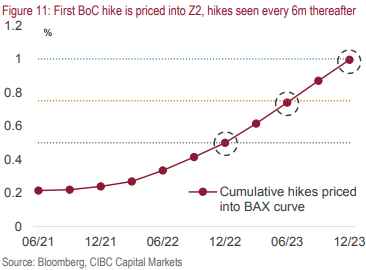 CIBC looks for the BoC to steadily reduce its footprint in the government bond market this year while keeping its boot on top of yields so as to limit or carefully control any increases in borrowing costs. All while pledging to keep the cash rate at 0.25%, no matter the short-term inflation outcomes.

That would reflect a shift to an almost Fed-style framework of average-inflation-targeting (AIT), coming amid a self-directed extrication from the bond market that would put a rough end date for its policy 'largesse' the calendar while also continuing to be supportive of Canada's economy.

The BoC already began work on exactly that in October when it reduced the size of its regular bond buys to "at least $4 billion a week," while simultaneously turning its policy cannon away from the shorter maturity bonds within the Canadian yield curve, and aiming it almost entirely at longer-dated maturities.

GBP/CAD surged that day alongside USD/CAD, while many other Canadian exchange rates tumbled. CIBC forecasts a similar policy outcome from the BoC's April meeting, which could matter for Sterling, especially in light of Macklem's views on inflation and the current policy stance of the BoE. 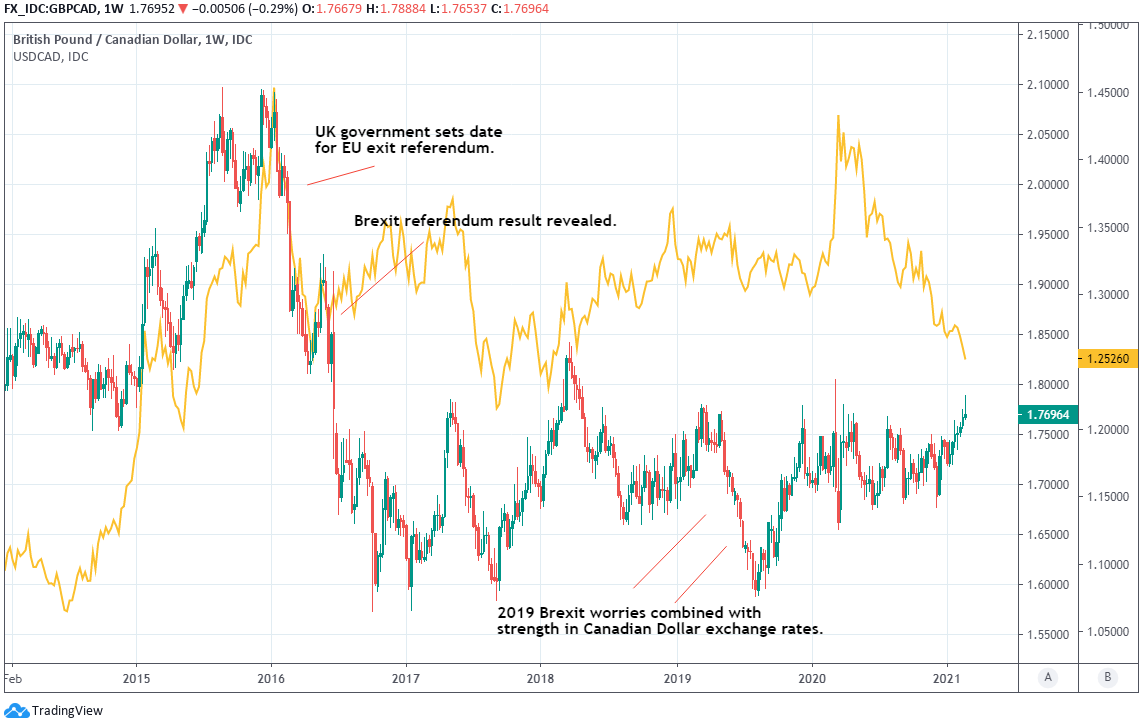 "I believe the MPC will vote sooner than the consensus expects to lift the base rate," says Dr Savvas Savouri, chief economist and partner at Toscafund Asset Management, a London-based multi-asset hedge fund with around $4bn under management. "I am writing here of a shift up to say 0.25%, before then 0.5% and ahead of the end of 2022 back up to its pre crisis 0.75%. Such calculated moves should not however be viewed as cause for concern, but rather a vote of confidence in the health of the UK economy."

The UK is now widely expected to enjoy a robust rebound sooner than other parts of the world, largely due to an early lead in getting its population vaccinated but also due to its comparatively greater damage during the pandemic in addition to statistical quirks in the way that UK GDP is measured by the Office for National Statistics. This for an economy that has, in recent years at least, had less trouble than others generating the 2% annual inflation coveted by many central banks in the developed world.

In the context of recent fashions readers may not be surprised to hear that market-based measures of inflation expectations are pointing to a 2% consumer price index at the other end of the BoE's forecast horizon. But the Old Lady of Threadneedle Street is one of the few central banks in the major economy space which might actually be minded to begin lifting its interest rate sooner rather than later, in the event of a pickup in inflation.

"The unleashing of - what when the time comes to unlock, will amount to at least – c. £300bn savings, is the cornerstone for my confidence in a swift UK economic recovery, as measured by GDP and reflected in a rapid and widespread labour market rebound," Savouri writes in a briefing to investors.

"As well as reflating the price of goods and services, enforced savings will be deployed into lifting asset prices, not merely UK properties but equities too," Savouri says. "Households and investors will not however have it all their own way in this regard. Rather than enjoying monopsonist power, we will find that our properties and equities will become highly sought targets by those overseas."

The BoE demonstrated its willingness to cast aside short-term uncertainties and pull the trigger on rate hikes when lifting Bank Rate from 0.25% to 0.75% between November 2017 and August 2018, both being moves that came amid Brexit-inspired turmoil in Westminster but which were intended to counteract the inflationary impulse fostered by the Pound's referendum-derived devaluation. That devaluation is now in the process of reversing.

In other words, there may be scope for "real yields" to rise in the UK just as the BoC is impeding an increase in the Canadian equivalents, which is something that could help underpin the outlook for a resurgent Pound-to-Canadian Dollar rate during the months ahead. Incidentally, analysts at Scotiabank have noted in recent weeks a steady turn for the better in the long-term trend for GBP/CAD, one which points to an eventual breakout into a higher trading range that could span the gap between 1.80 and 1.85.

"GBPCAD is trading at a new cycle high to start the week and is nearly a cent above the daily resistance we have highlighted in recent updates (1.7675)," writes Scotiabank's Juan Manuel Herrera in a Monday note. "The narrowing, upward sloping range in place since the start of the year suggests the GBP rally is running out of momentum. But we rather think the bullish alignment of short, medium and long-term trend (DMI) oscillators suggests the GBP will continue to push—or perhaps more accurately, grind— higher. There is a range of resistance points above the market that rather suggests the 1.77/1.80 range for the cross may slow gains in the next few weeks. We look for the GBP to remain well-supported on modest dips (mid/ upper 1.76s). Key support is 1.7530." 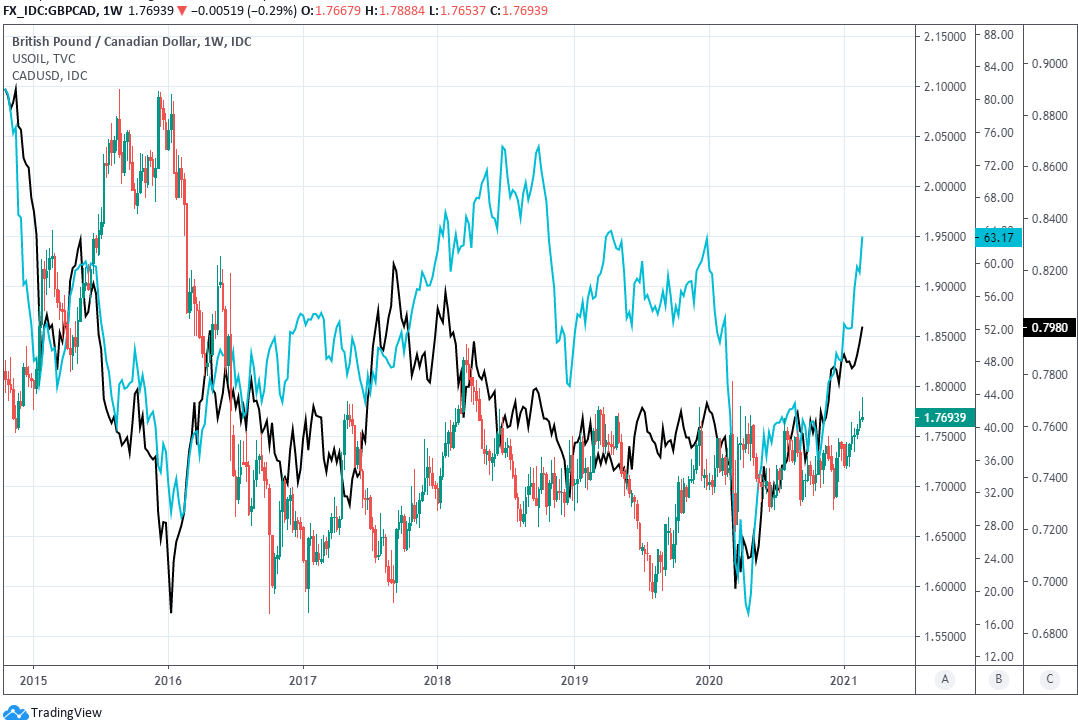 CIBC Capital Markets are looking to sell the Canadian Dollar into the Bank of Canada meeting, due on October 27.