Sterling softened ahead of the weekend following a strong earlier run against many major currencies and as markets digested a mixed set of UK economic reports which revealed the largest fall in retail sales since April 2021 for this January, while IHS Markit PMI surveys painted a more upbeat picture.

January's -8.2% fall was the largest decline since Britain's first full month of 'lockdown' last year, although this came just hours before consolation in the form of better-than-expected PMI surveys of the manufacturing and all-important services sector. The services PMI rose from 39.5 to 49.7, further than the 42.1 that was expected, leaving the industry within arm's reach of a return to growth. Meanwhile, the manufacturing PMI rose, when economists had looked for a fall.

With the Pound already the best performer of the week, it got little help from the data, although the data itself also did little to disrupt what are increasingly bullish trends on the charts. GBP/CAD has risen above 1.76 and could according to Scotiabank be in with a shot at rising above 1.80 in the weeks ahead. Meanwhile, the Loonie is seen on the verge of renewing an earlier offensive against the greenback, which would lead USD/CAD to new lows.

"A push higher through 1.7675 looks a matter of time. Trend strength oscillators are GBP-bullish across the short, medium and longer timeframes which limits downside risks and maintain focus on a topside break which should propel the cross towards a 1.80-1.85 trading range," says Juan Manuel Herrera, a strategist at Scotiabank. "New cycle lows would be USDCAD-bearish. Look to fade USD gains to the upper 1.26s/low 1.27 range. Support is 1.2595/00." 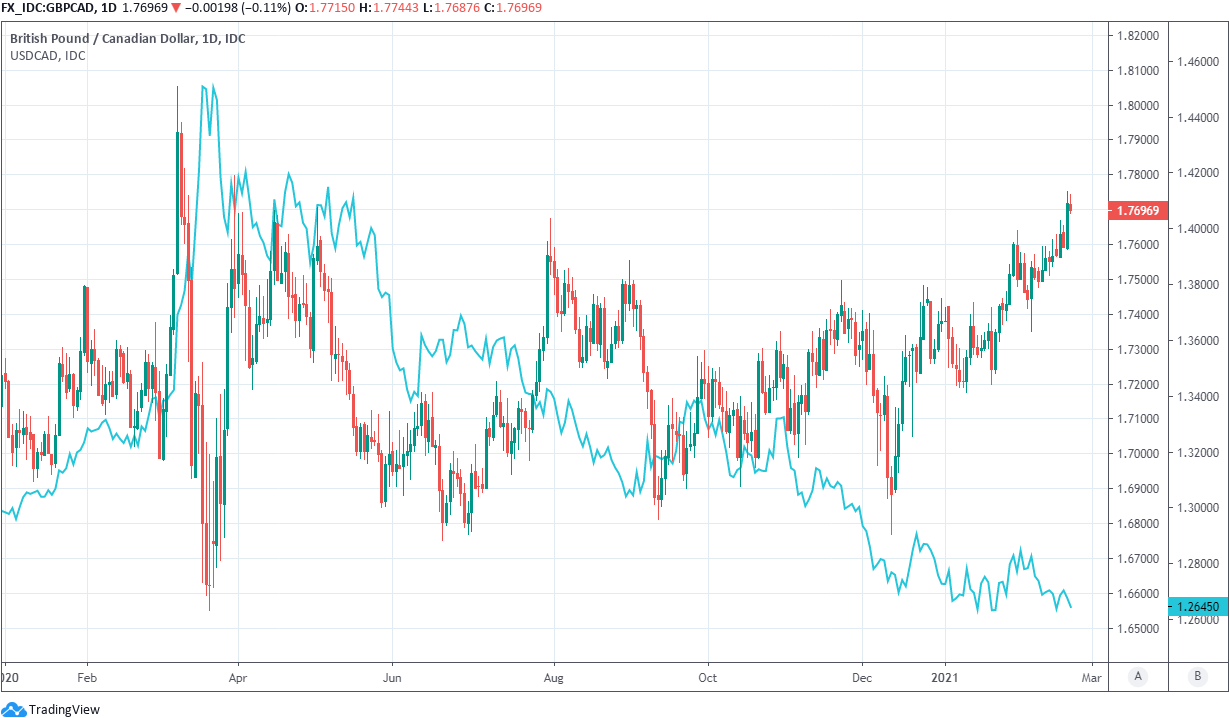 Sterling has risen against even popular commodity and reflation trades like the Loonie, which has itself now been a relative outperformer despite that there was no clear overall trend in risk markets for stocks and commodities this week. Global equities were a mixed bag of performances by Friday, oil was higher while gold was lower and U.S. Dollar exchange rates were somewhat mixed.

Investors evidently remained in an upbeat mood about the outlook for the global economy as well as currencies that are sensitive to its ever changing prospects, with Britain's position in the vaccination race and an ebbing away of 'no deal' Brexit risk often being cited for the Pound's outperformance.

"GBP rose 0.3% in January and was carried higher on the back of positive global risk sentiment and more vaccine optimism," says Paul Mackel, global head of FX research at HSBC. "Sterling’s strong run has continued alongside the broader rally in risk assets in recent weeks. We would question whether GBP deserves to be classed as a risk on currency, however. As such we believe it is vulnerable to a pull-back, especially is sentiment deteriorates or focus shifts to other, more idiosyncratic drivers."

Increased accumulation and repositioning of FX reserves by central banks has also been a lesser cited and possibly underappreciated influence on Sterling, whose popularity here may be as much the result of confidence among policymakers at the Bank of England (BoE) in their ability to reach the UK's inflation target as it is the result of anything else.

"I want to emphasise how far we still have to travel in this recovery," says the BoE's Gertjan Vlieghe, a member of the bank's rate setting committee on Friday. "Importantly, the transmission of monetary policy is much broader than just via the interest rate on bank loans. The cost of market financing (bonds, shares) would fall as normal, the exchange rate would fall as normal. The final question then remains in what circumstances negative interest rates are appropriate, meaning when are they needed in order to return inflation sustainably to target?"

To the extent that attraction to Sterling is actually driven by seemingly improved growth prospects, which would be one reason why the BoE has expressed confidence in its inflation-targeting abilities, it could also be highly relevant to the outlook that analysts at HSBC expect that Canada will outperform market expectations as well as the UK economy over the coming quarters.

"We are more bullish on the CAD than the consensus, which forecasts 1.25 on USD-CAD at the end of 2021, compared to our forecast of 1.22. The case for CAD strength is generally pretty straightforward, built on the likely price action during a period of global reflation," says Daragh Maher, head of Americas FX strategy at HSBC. "The bullish CAD narrative is not just reliant on a global perspective or a slavish correlation with equity sentiment." 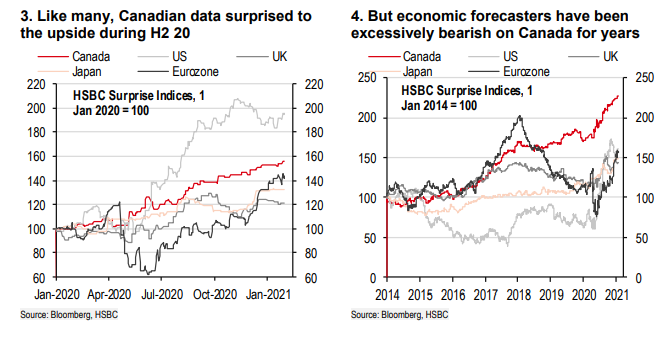 "The reality is that like many economies, the pace of recovery during H2 20 has already proven more marked than expected. Chart 3 shows HSBC’s economic activity surprise indices for Canada1 , US, UK, Japan, and the eurozone since the start of 2020. An upward moving line suggests data have surprised to the upside relative to consensus expectations," Maher adds.

The U.S. economy was the subject of the most undeservedly pessimistic economic forecasts in the latter half of last year, although and potentially due to its sighting next to the world's largest economy, Canada wasn't all that far behind in these terms. Furthermore, it's Canada's economic potential which economists, investors and financial markets have been most guilty of underestimating over the longer-term.

HSBC's research team has noted that the Canadian government's fiscal response to the coronavirus crisis has been the most aggressive seen among major economies, which may bode well for the North American country's recovery, while it could also be in line to ride the coattails of a stimulus-pumped and exceptionalist U.S. too. For an economy which is typically an outperformer of expectations anyhow, this could see Canada's economy and Dollar take the market by surprise later in 2021.

HSBC forecasts suggest USD/CAD should end the current year around 1.22 and when combined with the expectation that the main Sterling exchange rate GBP/USD falls back to 1.34 over the coming quarters, this suggests that the tables could turn on the Pound-to-Canadian Dollar rate further down the road in 2021. HSBC forecasts suggest GBP/CAD will end 2021 around 1.6350, which would be near September 2020 and post-referendum lows for Sterling.

"It is clear that the CAD can enjoy a cyclical boost from fiscally-supported economic activity. There may be more to come from Canada on this front," Maher writes in a February review and outline of HSBC's forecasts. "The cyclical interplay between fiscal policy and the CAD echoes the work we have done elsewhere on the USD, where we illustrate that a stronger growth outlook driven by fiscal stimulus supports the currency through its impact on monetary policy expectations. On the monetary policy front, the Bank of Canada sounded more upbeat about economic prospects following its latest policy meeting." 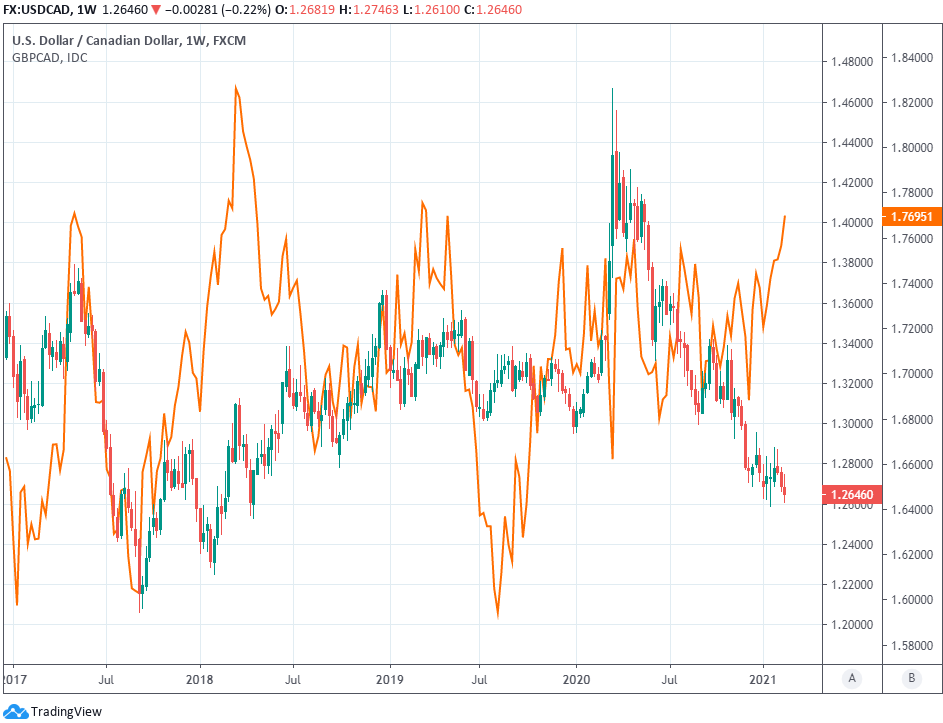 Above: USD/CAD shown at monthly intervals alongside GBP/CAD (orange).