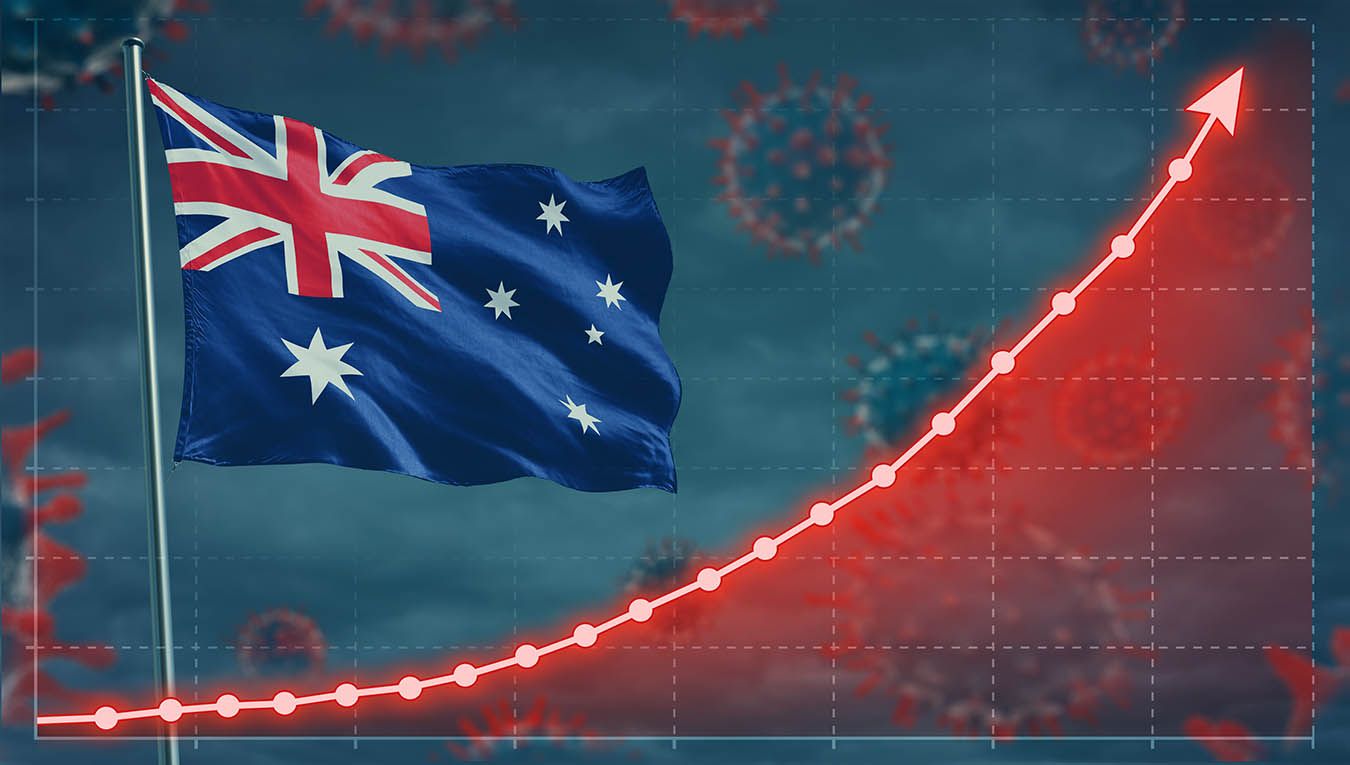 Foreign exchange trading strategists at big-name investment banks are targeting a rise in value in the British Pound against the Australian Dollar, citing a divergence in pandemic fortunes between the two countries over coming weeks.

It is these concerns that appear to be of primary concern from a strategic currency perspective.

The pandemic does now appear to be registering as a major differentiator between the Pound and Australian Dollar: as Australia struggles under severe lockdowns the UK witnesses falling Covid infection rates even as the economy is fully reopened.

UK economic outperformance over Australia is therefore anticipated in the third quarter which offers a clear-cut fundamental narrative for GBP/AUD upside.

Investment bank JP Morgan's spot trading desk in London have picked up on this theme and have said this week they are anticipating further GBP/AUD advances.

"I think we are a lot further down the road in this latest breakout than many fear. It remains to be seen if I am correct of course, but if so, GBP should find support from the UK’s handling of the situation, especially with the UK being the test case for the world," says a regular daily note from the desk. 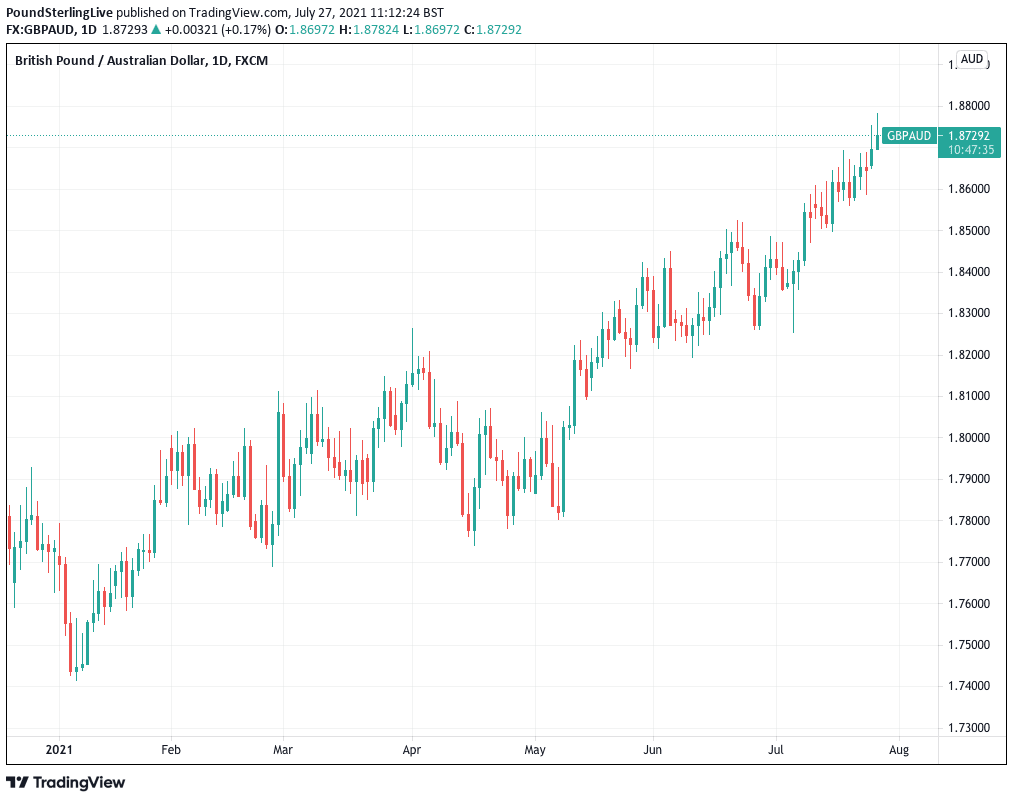 Above: GBP/AUD is engaged in a medium-term trend higher.

The UK has recorded falling levels of Covid-19 infections for six successive days now, with the scale of the drops surprising the scientific community who had warned the case rate would peak at between 100K and 200K a day.

On Monday the UK reported a 38% drop in week-on-week in people testing positive for Covid-19 with 24,950 new positive cases reported.

"The The broader risk dynamic will ultimately decide the direction of GBP and the back drop here is quite negative, but GBP should do OK on a Relative Value basis, especially against those countries who are way behind in their vaccination process. GBP/AUD screams out as an obvious buy," the JP Morgan note adds.

"We expect GBP to outperform on crosses like GBP/SEK and GBP/AUD, but GBP/USD direction may be more range-bound and determined by USD's direction," says Sheena Shah, a foreign exchange strategist at Morgan Stanley.

They find the Pound-Dollar exchange rate, which often tends to lead other Pound exchange rate trends, is now weak versus the S&P 500 and monetary policy rate differentials.

"Both divergences are caused by the recent broader USD strength which began in June. The Bank of England is not sending signals that it plans to turn more hawkish at the upcoming August meeting, despite a rise in realised inflation," says Shah, writing ahead of the much-anticipated August policy meeting of the Bank of England.

The event forms the highlight of the Pound's near-term calendar and Morgan Stanley expects a 'hawkish' outcome to result in Pound Sterling gains.

Such a reaction "would be from the result of any vote to stop asset purchases early (our economists don't think there is a majority for this or support from BoE Governor Bailey) or if the growth projections are adjusted such that this would require tighter policy in 2022," says Shahh.

Should the Pound recover a 'fairer value' - which Morgan Stanley are expecting to occur at some point - it can gain against the Dollar and other crosses such as GBP/AUD.

Foreign exchange strategists at NatWest Markets are meanwhile also betting against the Australian Dollar, saying they expect the Reserve Bank of Australia (RBA) to remain 'dovish'.

"The recent lockdowns in response to the fresh COVID-19 outbreaks in Australia would be a drag to the recovery, with consumption expected to rebound once these restrictions are eased," says Paul Robson, Head of G10 FX Strategy at NatWest Markets. 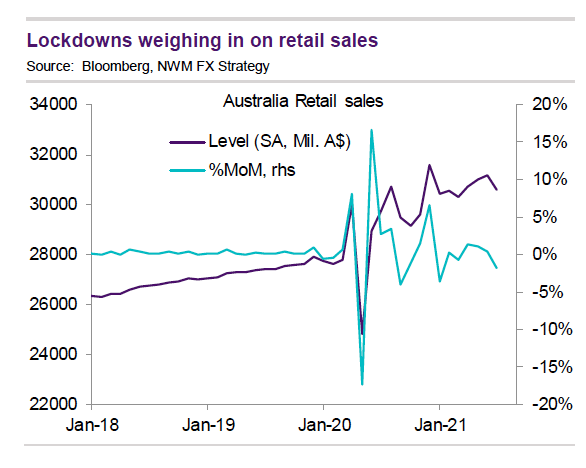 Robson says the impact of the lockdowns are already reflecting in weaker consumption, with retail sales for the month of June 2021 falling 1.8% month-on-month.

"Household consumption as a whole would continue to get impacted by such lockdowns, given Australia has one of the most lacklustre vaccine programme compared to G10 peers which remains a key medium term risk for the currency," says Robson.

Foreign exchange analysts are now particularly interested in what steps the RBA will take in response to the lockdowns and fears that the Delta variant will hang heavy over the outlook.

"The market has been pushing out the expected date when the RBA might start tightening policy. This is likely to weigh on AUD," says Marshall Gittler, Head of Investment Research at BDSwiss Holding Ltd. "The country is lagging other industrial nations in vaccinations – it’s administered enough doses for only 22% of its population, vs 51% for the US and 62% for the UK."

The RBA earlier in July said it would adjust its quantitative easing programme in such a way that would allow them greater flexibility to respond to shifting economic data.

They said they stood ready to reduce quantitative easing over coming months, but they would increase it if the economy deteriorated.

Economists are increasingly of the view that the RBA will lean on this flexibility to maintain existing quantitative easing levels, or even increase it, given developments concerning the virus.

Increasing quantitative easing would be seen by markets as a negative development for the Australian Dollar's value.

NatWest Markets continue to remain short AUD/NZD as the currency pair is a relative monetary policy story (the RBNZ is hawkish compared to the RBA) with macro fundamentals looking better in New Zealand compared to Australia.