- Trade war, October 29 budget and rating all key to outlook.

The Rand caught a breather Friday as the Dollar crumbled amid fresh bets the Federal Reserve (Fed) will soon step up the pace of its rate cuts, vut analysts are divided in their outlooks with some tipping the South African unit gains in the short-term, as others eye fresh losses by year-end.

"In short, the industrial economy is struggling badly. Regional surveys make it clear that export-heavy parts of the country are faring worst, and we expect no change in that picture anytime soon. It’s just a matter of time before the sector starts to shed jobs," says Ian Shepherdson, chief economist at Pantheon Macroeconomics. "The near-term outlook for manufacturing output is grim, given the collapse in export orders."

The American data has stoked fears that the ongoing economic slowdown could be gathering pace, with weakness in manufacturing potentially spilling over into the broader economy. The Federal Reserve Bank of New York 'nowcast' points to GDP growth of 2% in the third quarter, unchanged from the prior period, but tips a deceleration to an annualised pace of 1.3% in the final quarter.

"US manufacturing output has now contracted in six of the first nine months of 2019. With the economic slowdown spreading to other parts of the US economy, the Federal Reserve will likely have to respond with several more rate cuts," says James Knightley, chief international economist at ING. "We look for moves in October and December, and in January 2020." 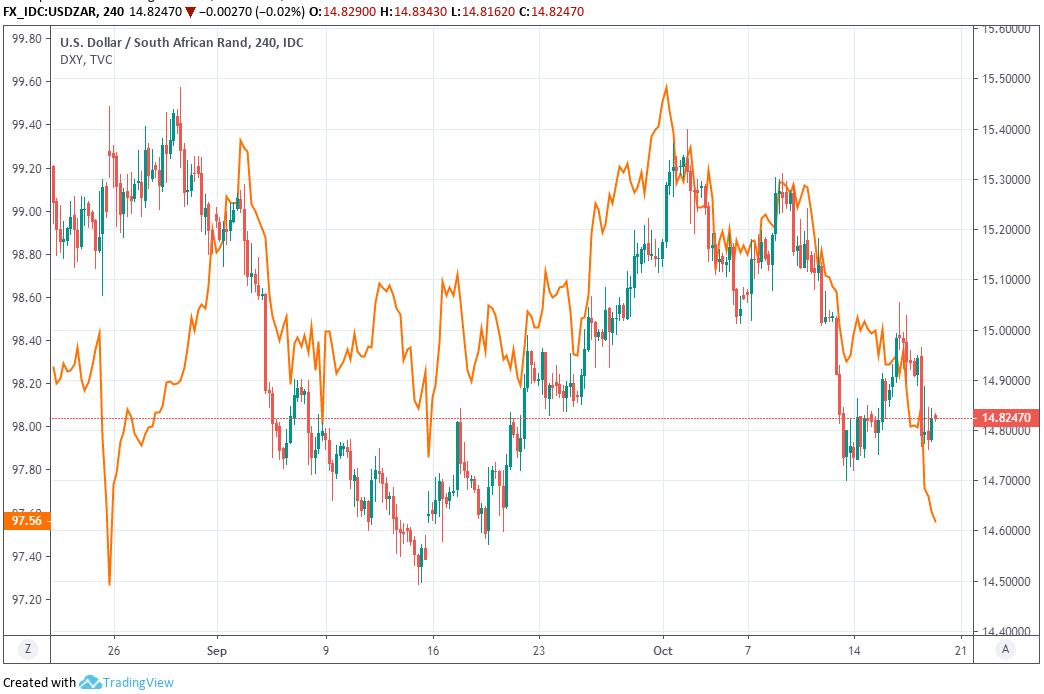 President Donald Trump's trade war with China is firmly in the frame for the anticipated weakness in the U.S. economy, which has led markets to bet increasingly on a series of additional interest rate cuts coming in the months ahead, even though the Fed indicated strongly in September that its cuts up until that point were still very much a 'mid-cycle adjustment' rather than the beginning of an all-out easing cycle. It's the easing cycle that analysts say is necessary to sustainably weaken the Dollar.

U.S. interest rates are an important driver of Dollar strength as well as global borrowing costs, which matter for the Rand because they both make it more expensive for countries like South Africa to pay off their Dollar debts. The Fed raised rates nine times between the end of 2015 and 2018, leaving the Fed Funds rate at 2.5% until July when the bank cut it to 2.25%. Rates were then cut to 2% in September and markets are now eyeing a move to 1.75% this month. 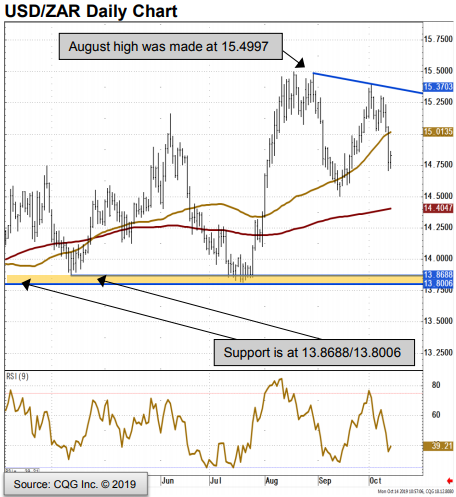 Jones, who studies trends and momentum on the charts, is looking for technical factors to continue carrying the Rand higher. She says the charts are pointing to further gains fover at least the next four weeks, although the South African currency could also benefit from continued speculation about Fed rate cuts as well as geopolitical developments like the recent accord that has so-far prevented the U.S. imposing fresh tariffs on China.

The U.S. and China agreed a ceasefire last Friday that averted a tariff increase scheduled for October 15, although further levies are still due to be imposed on Chinese exports in December unless further progress is made in the talks ahead of a mid-November summit. Since then the U.S. has backed away from a confrontation with Turkey over its military incursion into Syria and the UK has agreed a Brexit deal with the EU, with both helping improve the market mood, but some still warn of losses for the Rand.

"Despite that the correlation between USD/CNH and USD/ZAR has eased from the cyclical high of 0.66 seen earlier this year, the relationship remains elevated. Consequently, as we assume that there’s still upside potential for USD/CNH, the ZAR profile is higher than we previously expected," says Bipan Rai, head of FX strategy at CIBC Capital Markets. "Until the global trade picture improves (likely next year), which would benefit macro data and fiscal dynamics, expect ZAR volatility and uncertainty to persist." 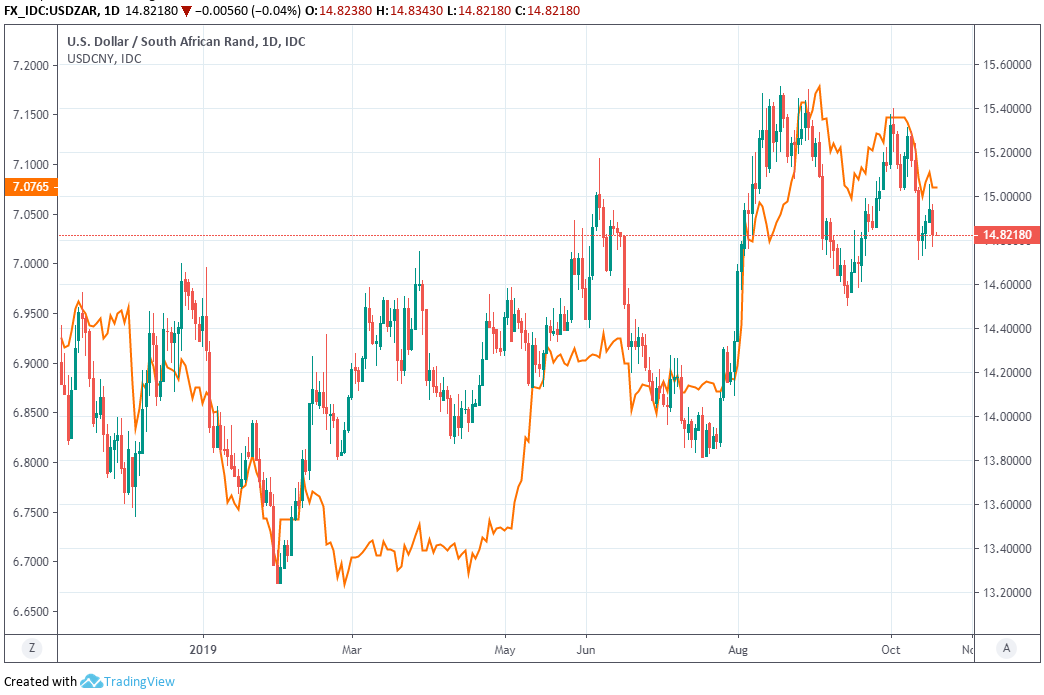 Rai and the CIBC team say China's currency, which is followed closely by the Rand because the two have a high correlation, is set to weaken even further in the months ahead despite last Friday's trade truce because the U.S. has not rolled back any of its existing tariffs and those are doing severe damage to the Chinese economy. That could mean the Rand weakens in the months ahead even if the domestic newsflow is positive, which it hasn't been lately.

South Africa had its second day of rotational power cuts Thursday due to a failure of production equipment owned and operated by the ailing electricity firm Eskom. The blackouts have stoked fears that the damaging power cuts of the first quarter are set to blight the economy even further up ahead. The blackouts are occurring, and fears for the economy rising, just weeks ahead of the next budget and credit rating decision from Moody's.

"Unplanned breakdowns have risen above 10,500MW, impacting on Eskom ability to meet the current demand for electricity. The power utility said stage 2 rotational load-shedding will be implement again today from 09:00 to 23:00. Eskom shed a total of 769GWh in the first quarter of the year, which contributed towards GDP contracting by 3.1% q/q saar," says Nema Ramkhelawan-Bhana, an economist at Rand Merchant Bank. 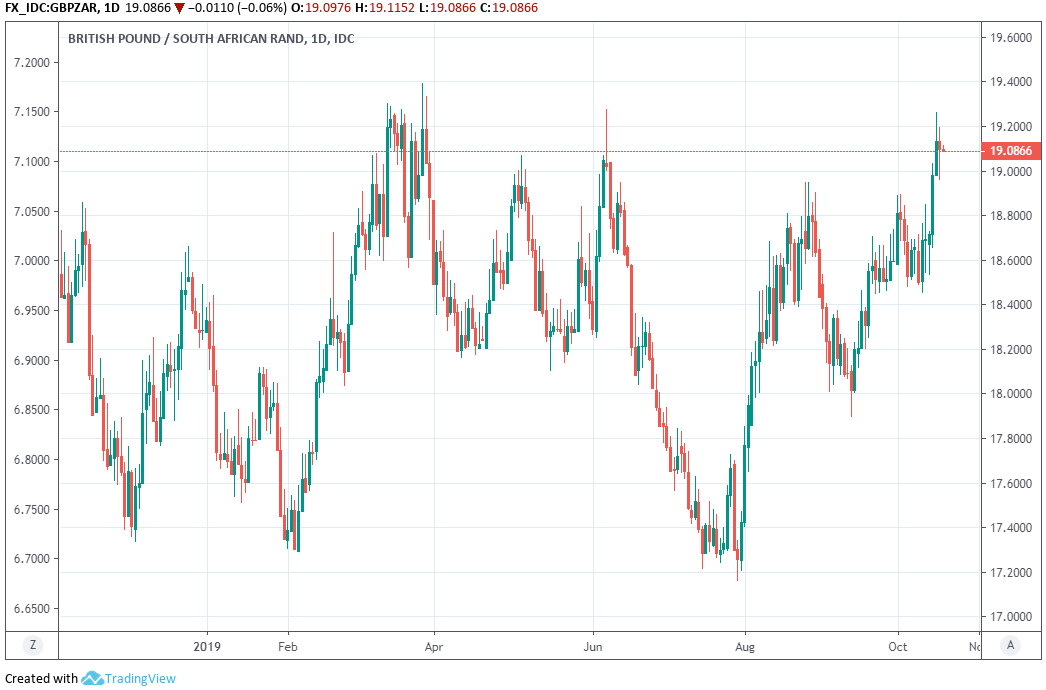 The next budget will be announced on October 29 and there's a strong prospect the details of it could upset the currency market, to weakness in the Rand, because the last fiscal plan was widely panned as marking a step backward and since then a new multi-year bailout has been announced for Eskom. Some economists fear the projected budget deficit could be north of 6% of GDP, which would risk forcing Moody's to change the outlook for the rating from stable to negative.

Moody's will announce its next decision in early November in what will be an important moment for the Rand because changing the outlook to negative would indicate a possible downgrade in February 2020. Any loss of the 'investment grade' rating would see investors, particularly those benchmarking to the Citi World Government Bond index, forced into selling their government bonds. That would likely mean large outflows of capital from South Africa.

"We recognize the risks of the MTBPS revealing a substantial deterioration in public finances since the February budget. The debt-to-GDP ratio could be up to 2% higher than the 4.3% estimate for FY19/20. Expect any such outcome to contribute to fiscal worries, underlying ongoing concerns of a ratings downgrade from investment grade by Moody’s on November 1st," CIBC's Rai says.

CIBC forecasts the USD/ZAR rate will finish the year at 15.30, up from 14.82 Friday, and that it won't return back to its current level before September 2020. However, the bank projects the Pound-to-Rand rate will fall back to 18.82 before year-end because it doubts that the Brexit deal announced Thursday by London and Brussels will get through a divided parliament. Failure to approve the Brexit deal this Saturday would open the door to fresh losses for the Pound.