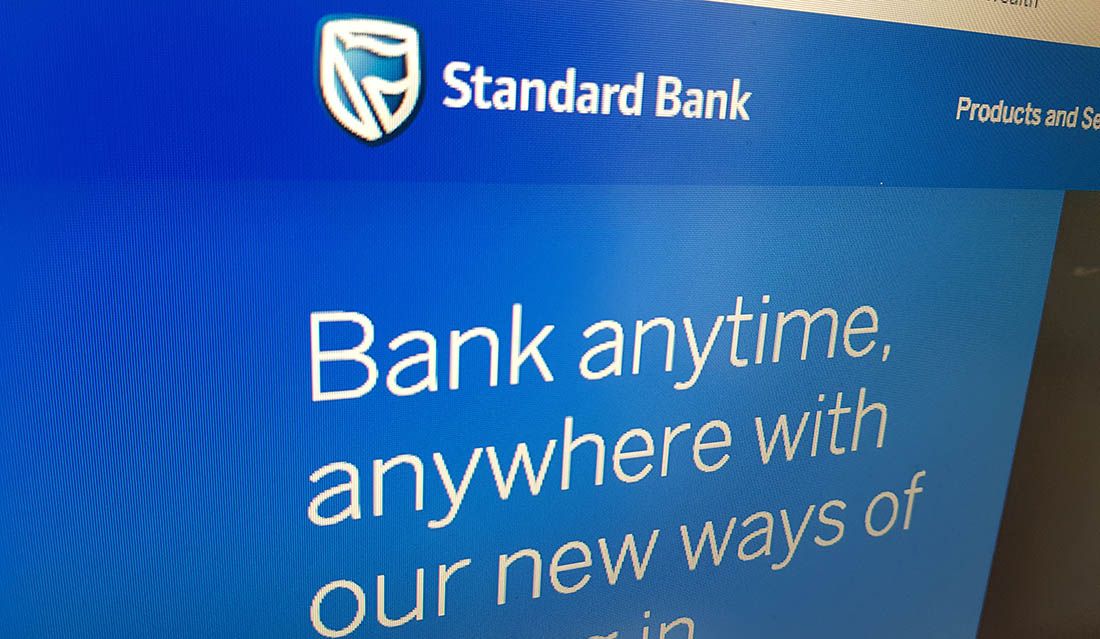 - Standard Bank looks for USD/ZAR to fall further before year-end.

The Rand was trading higher against a weak Dollar and Pound on Friday as investors bid for the South African currency following President Cyril Ramaphosa's third State-of-the-Nation address and amid a series of supportive international developments.

South Africa's Rand has risen more than 3% against the Dollar this week and by a similar amount relative to a beleaguered Pound Sterling in a rally that saw the emerging market unit hit 14.45 target set out by Credit Suisse, which was reported by Pound Sterling Live earlier this week.

"The utility’s financial position remains a matter of grave concern. With the current committed funding from government, outlined in the 2019 Budget, Eskom has sufficient cash to meet its obligations until the end of October 2019. For Eskom to default on its loans will cause a cross-default on its remaining debt and would have a huge impact on the already constrained fiscus. We will therefore table a Special Appropriation Bill on an urgent basis," Ramaphosa told South Africans.

Eskom already has enough cash to see itself through until October, but Ramaphosa says the government will now allow the company to draw on more funds that were set aside for it in February's budget. Some R230 bn of funds were set aside in February to help the company onto a more sustainable footing over a ten year period, but Eskom will soon be able to draw on a "significant portion" of the support funding in the earlier years of the programme.

Eskom must also stick with a nine-point reform plan that could ultimately see it broken up, with a part of the taxpayer's holding in the company sold to outside investors. Tee company is a major threat to the South African public finances and Rand because the government is on the hook for more than R350 bn of Eskom's debts and there has so-far been no end to the financial demands of the cash-strapped energy firm.

"Further details will be announced in the coming weeks. Our constructive medium-term forecasts for the rand, local bonds and growth are premised on traction with these planned reforms," Darmalingham says, in a note to clients. "We expect the rand to firm further in the coming months. We forecast it at R13.80/$ by year-end 2019." 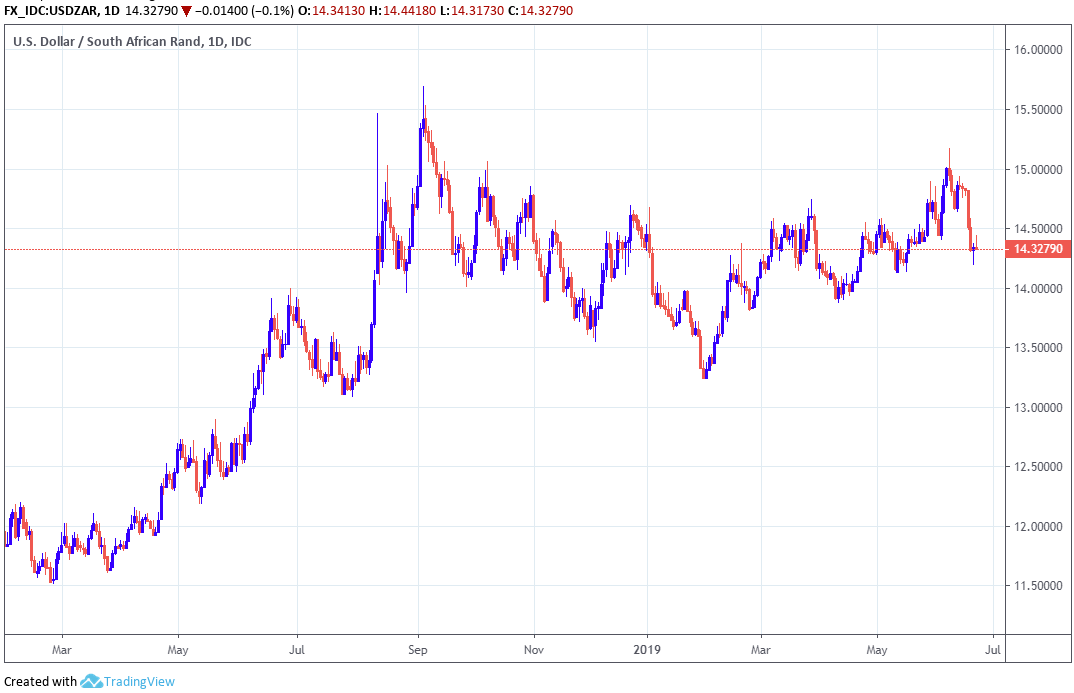 Moody's, the last major rating agency to have South Africa as an 'investment grade' credit prospect, has identified governance and the weak financial positions of state-owned-enterprises as among the things it's watching.

This is important because Moody's will decide in November whether South Africa can keep it's top credit rating, which is necessary for the country to avoid significant outflows of international capital from the government bond market, which would severely hurt the Rand.

"We do not expect rating changes this year, though the risk has increased, especially after the Q1 GDP outcome," Darmalingham says.

South African government spending and debt have risen in recent years and the government is now under pressure from Moody's to reduce it, which explains the sense of urgency among lawmakers as well as why the Rand can be especially volatile in response to some economic figures.

The outlook for the public finances became more uncertain in recent weeks when first quarter growth figures showed the economy contracting by 3.2%, which was a much steeper fall than the 1.7% anticipated by the market.

But for the time being at least, the Rand is revelling in the fact that international investors have rediscovered their appetite for the South African currency.

"ZAR stands to benefit disproportionately from a potential risk-on in EM due to a positive surprise at the G20 in combination with the Fed at least firmly signalling the beginning of a cutting cycle at the July FOMC. ZAR is the EM currency most shorted by real money, according to our weekly Liquid Cross Border Flows data. We think this reflects the flurry of negative fiscal news lately, but even more so the ZAR's role as a trade war proxy hedge," says David Hauner, a strategist at Bank of America. 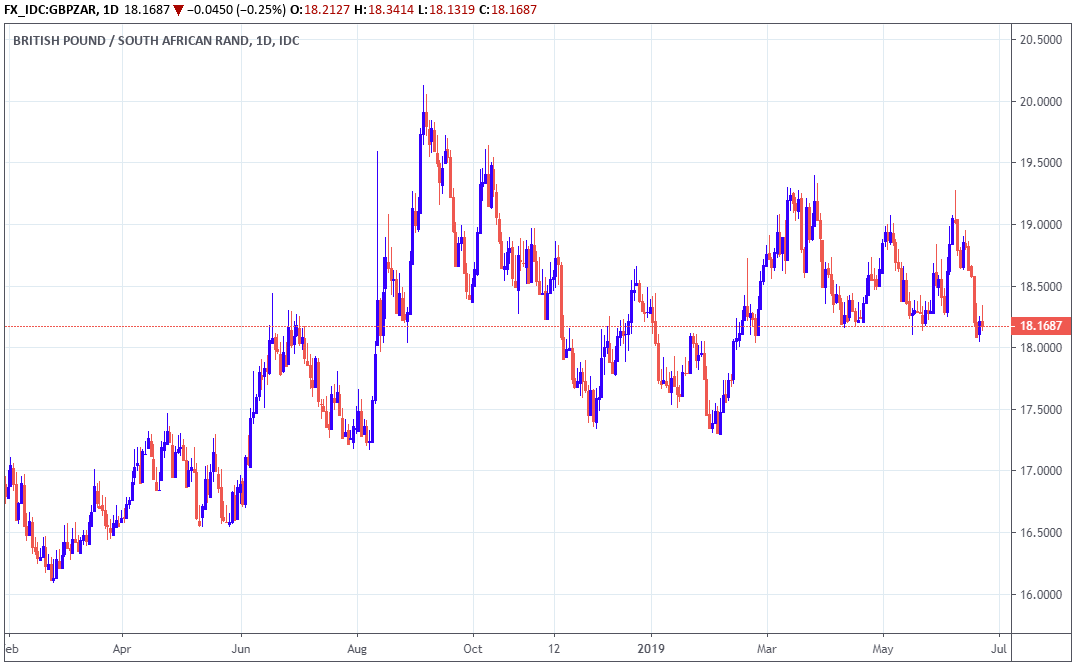 The U.S. Federal Reserve (Fed) admitted Wednesday that it might cut interest rates before the year is out, vindicating some analysts for having bet against the U.S. greenback this year. The statement came amid mounting hopes the U.S.-China trade war will be deescalated at the end of June.

Fed rate cuts would provide relief to the Rand and South African economy, which saw capital flee and was clobbered with higher funding costs in the last 18 months due to rising U.S. interest rates that drove the Dollar higher.

An end to the trade conflict between the world's two largest economies would also be good for sentiment toward the Rand and economy, not least of all because South Africa's largest trade partner is China and the Rand is sensitive to movements in the Dollar, which has been propped up by 'safe-haven' flows relating to the tariff fight.

"Investor consensus expects no breakthrough at the G20, but no new tariffs either. So either escalation or a breakthrough would surprise markets. Still we see positive risk/reward in EMFX into the event for two reasons: first, positioning is already very defensive in terms of FX hedges and cash levels; and second, a lack of progress probably means a dovish Fed and Trump tweets about undesirable USD strength," says Bank of America's Hauner.

In May President Donald Trump raised the tariffs already charged on $200 bn of Chinese annual exports to the U.S. and began threatening the other £300 bn of its annual trade with America.

He and President Xi Jingping are due to meet on the sidelines of the G20 conference in Osaka, Japan, at the end of June and hopes are high that a further increase in tariffs can be averted by an agreement ending China's "unfair" trading practices.