The Japanese Yen remained the worst performing major currency of 2021 on Tuesday but could be set to narrow the gap between itself and comparable rivals over the coming weeks if BMO Capital Markets is right to be concerned about the prospect of a 'short squeeze' playing out this month.

Japan's Yen was vying for the lead among major currencies on an intraday basis Tuesday having been lifted in the wake of faster than expected U.S. inflation data as well as when the New York Times reported the U.S. is likely to suspend use of the coronavirus vaccine made by Johnson & Johnson (J&J) over concerns about a possible link with blood clots.

The vaccine relies on the same technological innovation as that made by Astrazeneca, which has also been a subject of concern in European countries for the same reasons, though it's not clear what impact any suspension would have on the overall U.S. vaccination programme.

Dollars were bought hand over fist by some investors in recent weeks as rising spending in Washington, an early unlocking of the economy and quickening vaccination programme have stoked expectations for an exceptionalist performance from the world's largest economy over the coming months.

Those expectations have in turn encouraged investors to begin wagering that the Federal Reserve (Fed) could lift its interest rate as soon as the end of 2022, driving a surge in U.S. bond yields that has doubtless played a role in the undoing of the Yen though speculators betting against the Japanese currency are now in a "precarious situation."

"The net short position was reduced from the equivalent of USD4.9bn to 4.1bn. However, most of that position reduction came from leveraged funds adding new positions on the long-JPY side rather than exiting positions on the short-JPY side," says Greg Anderson, global head of FX strategy at BMO, of Commodity Futures Trading Commission data covering the week to April 06. "The short-JPY side remains at basically the biggest it has been since December 2018." 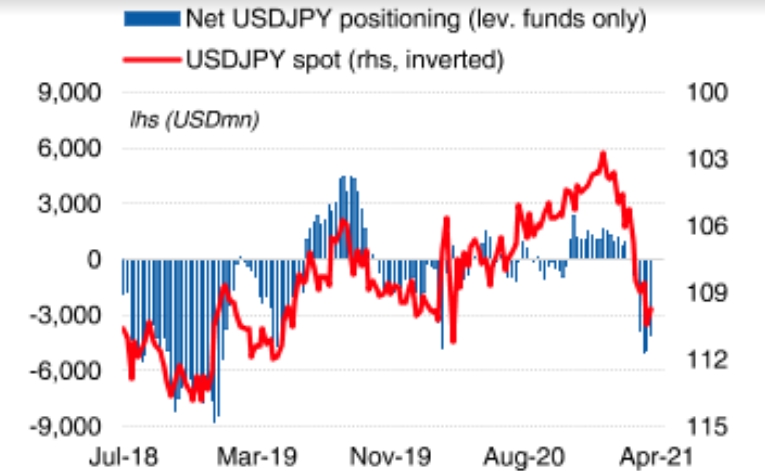 Anderson and European colleague Stephen Gallo had already warned in an early April podcast posted to BMO's website that the Yen could be likely to make a comeback this month as investors are potentially squeezed out of bets against the Japanese currency.

That process may already have begun in the first week of April when some institutional investors began betting on a recovery by the Yen, effectively reducing the overall net position, although the idea that the Yen would fall in the coming months still remained the leveraged funds community's single largest bet for or against any one currency.

"Normally leveraged funds and real money funds are taking the same positions in the same direction at the same time in a given currency pair," Anderson says. 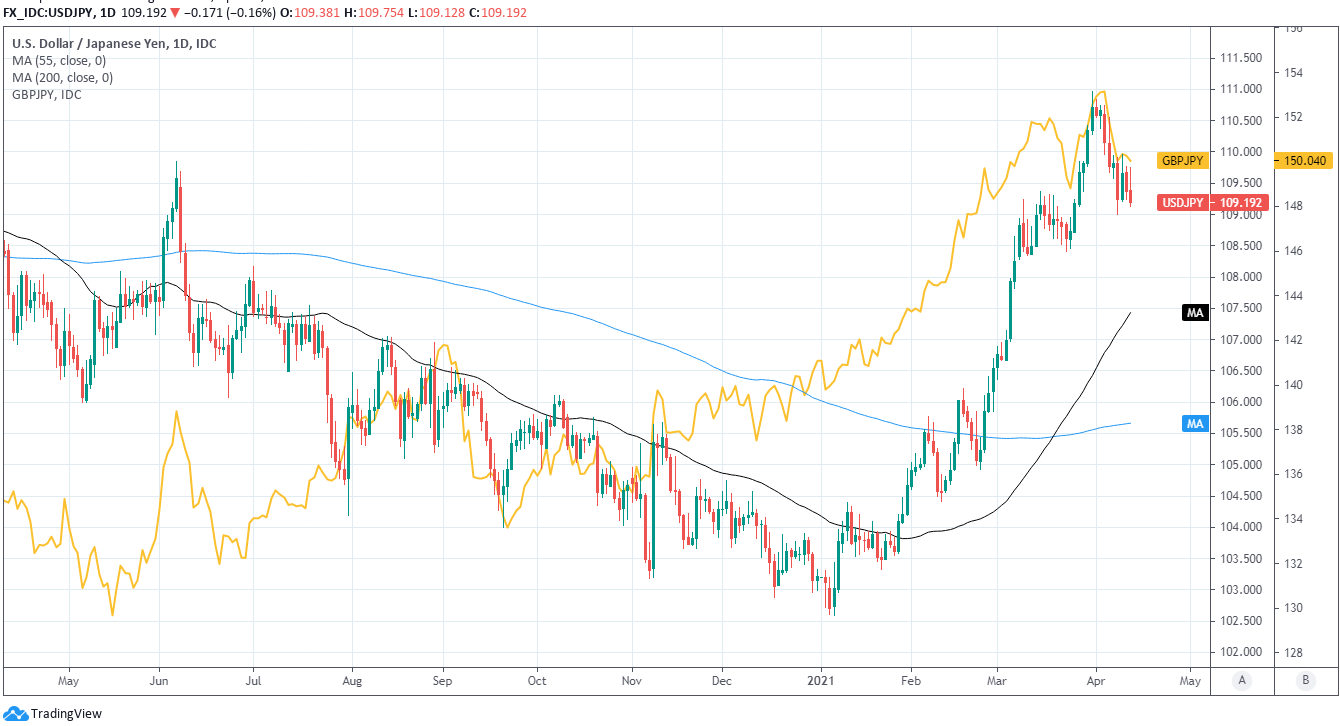 Above: USD/JPY at daily intervals with 55 (black) and 200-day (blue) averages alongside Pound-to-Yen rate (yellow).

Real money flows, which are those emanating from pension funds, insurance funds, real estate investment trusts, asset managers and other finance houses, were favourable for the Japanese Yen on a net basis during the first quarter with domestic investors buying back local assets while foreigners also piled into Japanese stock markets.

Anderson and the BMO team say institutional speculators are likely anticipating a resumption of investment outflows from Japan during April and following the opening of a new financial year but have warned that if those outflows do not show up then punters who've been betting against the Yen could find themselves in a precarious position.

"Now this may not end badly for speculators and it won't if Japanese real money buys a bunch of foreign assets in April. However, this is a precarious situation, a bit like a House of Cards," Anderson said. "If those real money outflows don't show up in April, then speculators are left holding the bag so to speak." 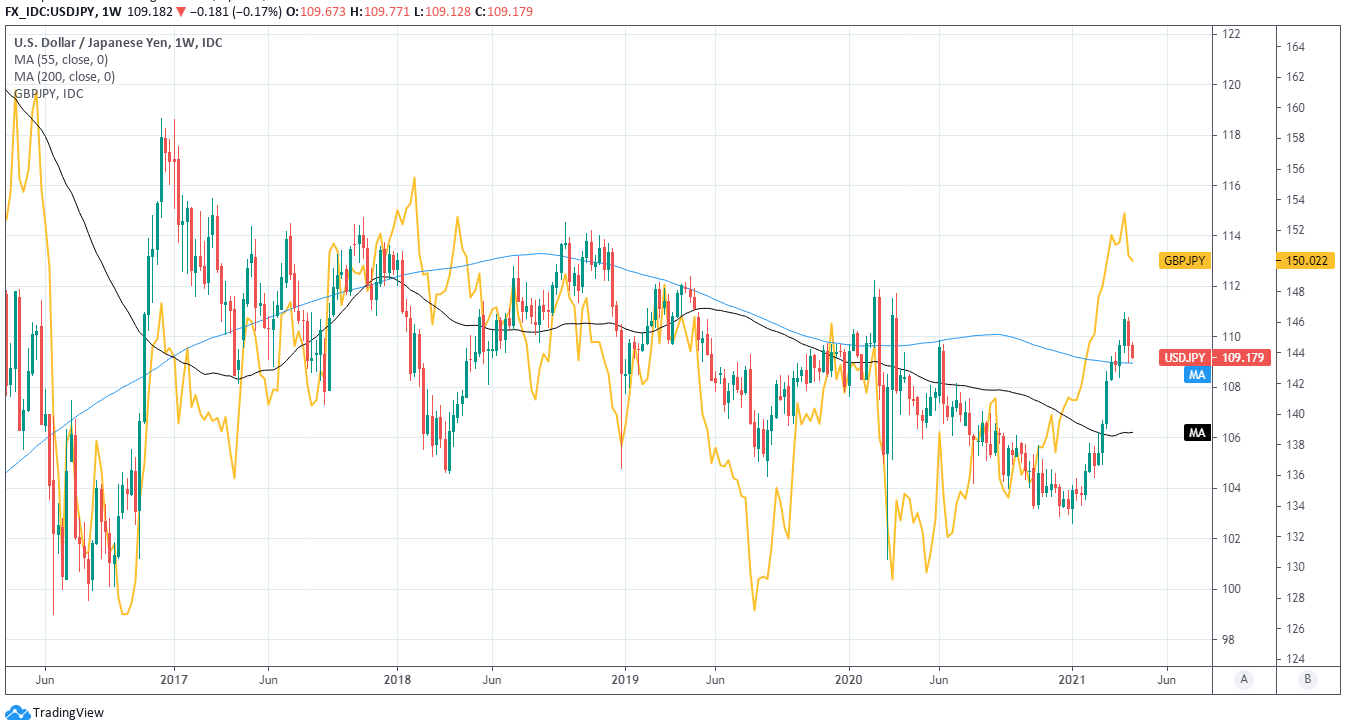 Above: USD/JPY at weekly intervals with 55 (black) and 200-day (blue) averages alongside Pound-to-Yen rate (yellow).

"It is getting harder to ignore the tightening in China," says Brent Donnelly, a spot FX trader at HSBC in a trading desk commentary. "I am not ringing any urgent alarm bells here, but I do think it’s worth trading AUDJPY from the short side and it is good to remain hyper vigilant for any drop in iron ore and copper that might show the waning credit impulse in China and the fully-priced US reflation trade are ready to reverse the commodity and recovery euphoria."

There are numerous other reasons why a short-squeeze might play out ranging from scope for another U.S. Dollar downturn to geopolitical risks, especially those in Eastern Europe and the South China Sea where U.S. foreign policy activities have seen Washington stepping on Russian and Chinese toes.

Both of these could either compel leveraged fund investors to abandon their positions against the Japanese currency or drive demand from elsewhere for the Yen's safe-haven properties, which would each have the effect of weighing on a USD/JPY rate that was still up more than 6% in 2021 on Tuesday.

This would as a bare minimum call a halt to the 2021 increase in the Pound-to-Yen rate as well as losses elsewhere in the Japanese currency complex. There is much uncertainty about the outlook for all currencies at present however, and especially in light of a possible inflection point for the Dollar exchange rates.

"Our dovish Fed forecasts, the swing to speculative Yen shorts, limited evidence (at least so far) of rising bond outflows from Japan, and the currency’s cheap valuations all argue against extrapolating recent depreciation too far," says Isabella Rosenberg, a global foreign exchange and emerging market strategist at Goldman Sachs. "Over the short term, risks for USD/JPY will likely be skewed to the topside until markets have fully discounted the coming vaccine-led surge in growth and inflation. However, we still expect Yen appreciation vs USD in the medium-term, and are holding our 12m USD/JPY target at 103." 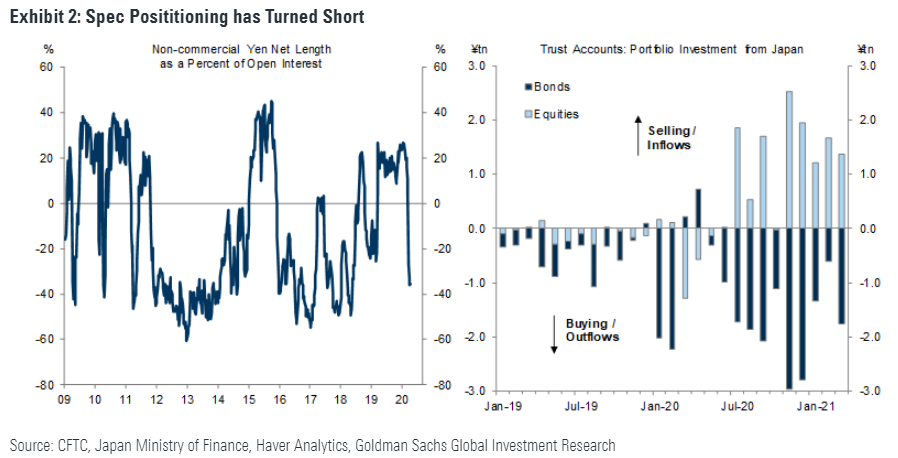