The Pound to Dollar exchange rate remains suppressed and at risk of further lurches below 1.30 over the coming days due to continuing strength of the U.S. Dollar and likely side effects of a possible People’s Bank of China (PBoC) effort to fend off unwanted strength in the Renminbi.

Sterling rallied by more than 100 points against the Dollar last Wednesday but its burst of strength ebbed quickly and the Pound-Dollar rate later fell back to 1.3000 where it entered the holiday-shortened week this Tuesday.

“GBP/USD can remain heavy this week near 1.3000. Bank of England (BoE) Governor Bailey speaks on Thursday. Financial markets will be looking for any hints as to whether the BoE is more concerned about high inflation or the hit to disposable income from higher energy prices,” says Joseph Capurso, head of international economics at Commonwealth Bank of Australia.

Last Wednesday’s rally was also echoed in the Euro-Dollar rate and both came accompanied by a strong indication that the flows behind those price moves arrived in Europe from Beijing and through the Sterling-Renminbi and Euro-Renminbi pathways. 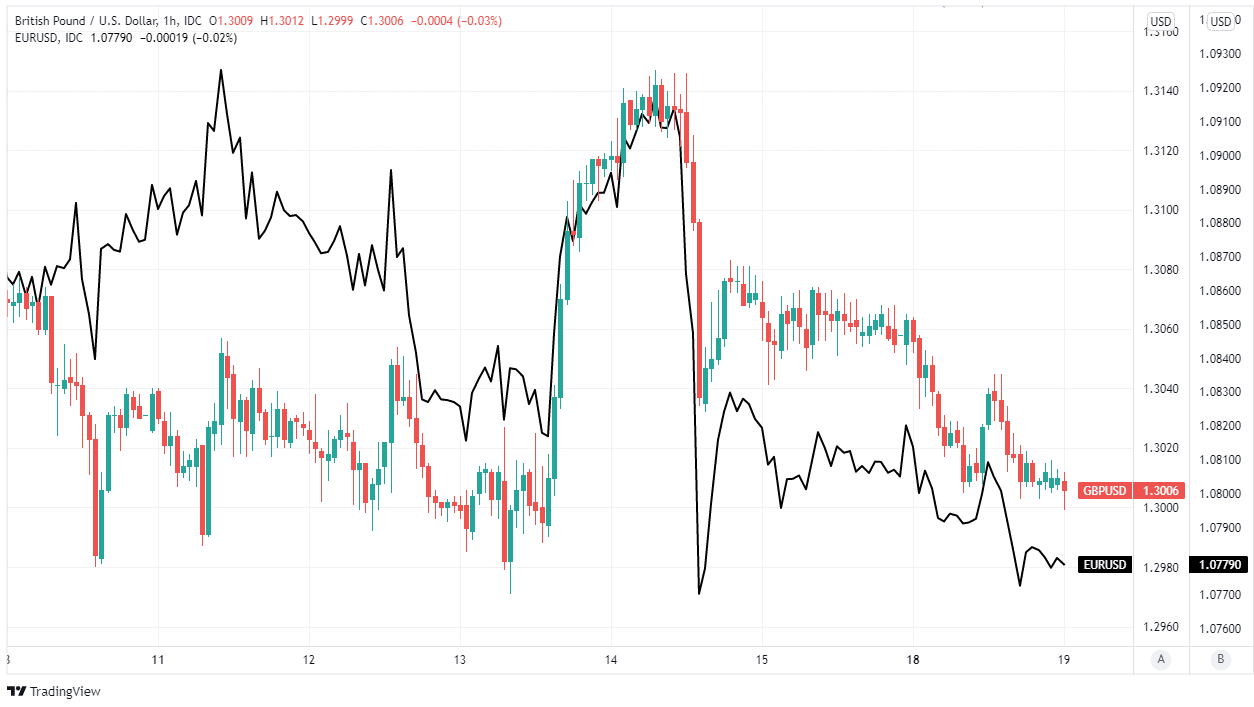 Above: Pound to Dollar rate shown at hourly intervals alongside EUR/USD. Click image for closer inspection

To the extent that these flows originated from the PBoC itself, they would also be an indication of an increasing desire in Beijing to fend off any further strength in the managed-floating Renminbi following an almost two year advance in the trade-weighted or overall measure of the currency.

“We are seeing depreciation pressure for the Chinese currency over the coming year. The Chinese economy is set to slow further as the property softness and Covid-induced consumption weakness remain the key drags,” says Hao Zhou, an analyst at Commerzbank.

The Renminbi has risen against the Dollar since May 2020 and this as well as the weakness of other currencies during that interval have both led the overall or trade-weighted Renminbi to rise almost relentlessly including throughout the ongoing economic slowdown in China. 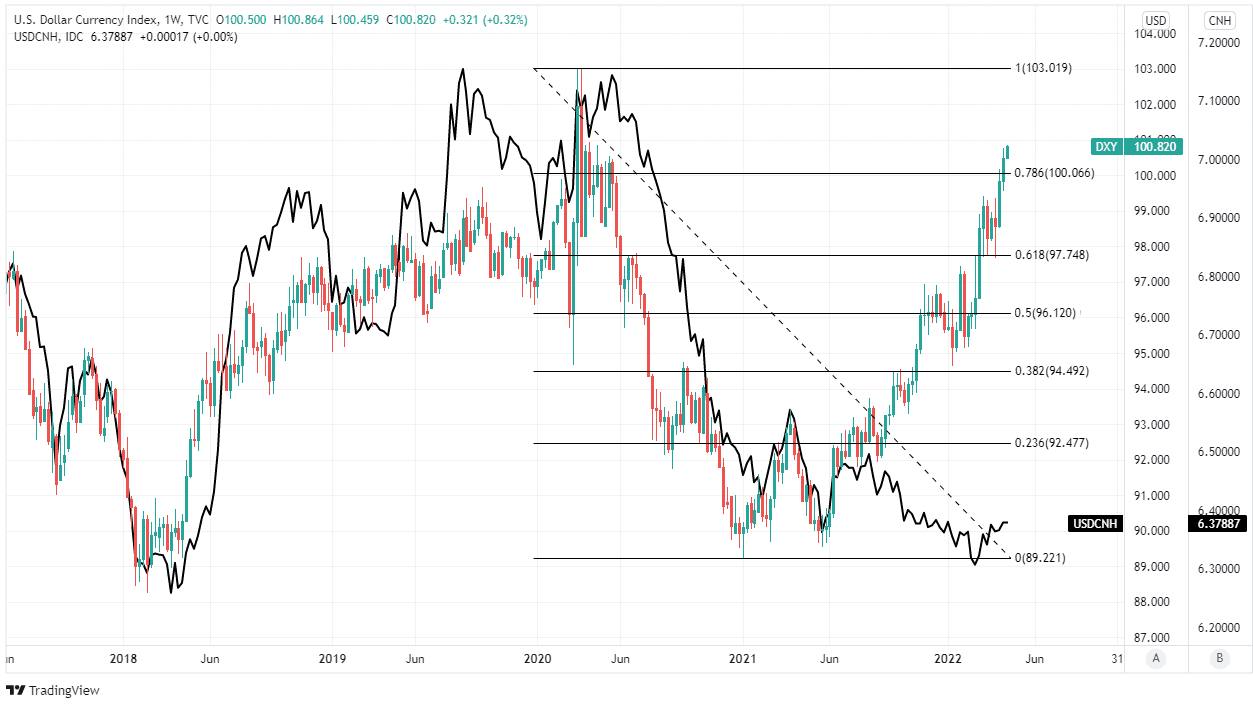 “This [Monday’s strong Q1 GDP print] feels like the prelude to a soft Q2 to be honest. The weaker consumer backdrop in China is a HUGE risk to the macro picture going forward,” says Bipan Rai, North American head of FX strategy at CIBC Capital Markets.

The Euro and Japanese Yen are the second and third largest parts of the trade-weighted Renminbi and also feature as the two weakest major currencies relative to the Dollar this year, meaning they would be the more worthwhile focus of any PBoC interventions to fend off unwanted currency strength.

But the Euro is also the largest part of the trade-weighted U.S. Dollar Index and the latter has been rising strongly due to the increasingly ‘hawkish’ Federal Reserve (Fed) policy outlook and pressure on other currencies connected with the Russian invasion of Ukraine. 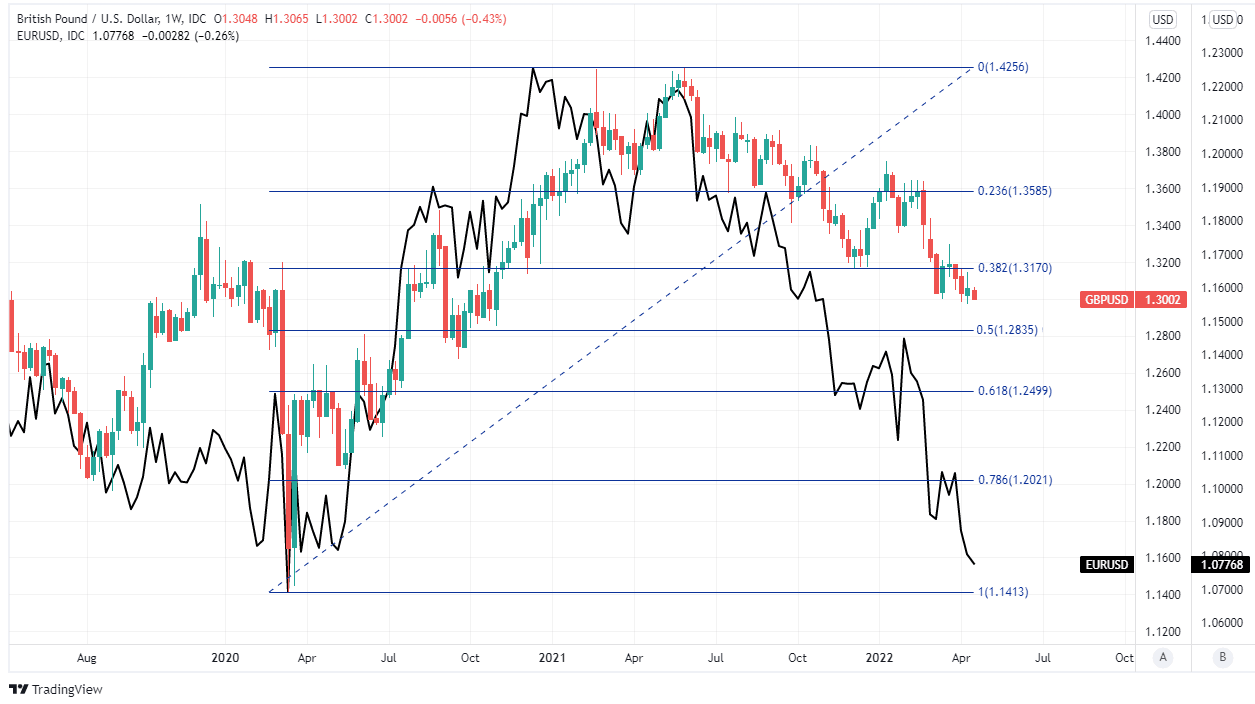 It's possible in theory, if not likely in practice, that any PBoC move to support EUR/USD or stifle the upside in USD/JPY would have the effect of diverting the Dollar’s appreciation elsewhere as if it was a body of water flowing around and onward from an obstacle laying in its path.

That would imply upside for currency pairs like USD/CAD and USD/MXN while making hard work of any effort by Sterling to climb much above 1.30. (Set your FX rate alert here). 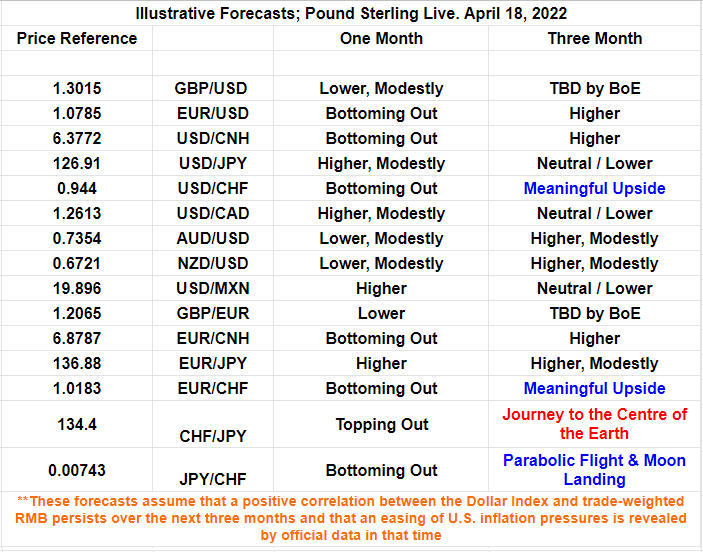