Pound Sterling has reached its lowest levels in eleven months against the Dollar this week, but the prospect of a recovery is building according to a major Wall Street bank.

Morgan Stanley says the Pound to Dollar exchange rate (GBP/USD) lacks cheerleaders right now, but that negative sentiment against the UK currency might have gone too far.

They are watching upcoming data - notably next Tuesday's labour market statistics - to offer the chance for a recovery.

"We think risks are now skewed to the upside for GBP. Good economic data and hence higher real yields are a necessary condition for turning outright bullish, in our view," says Wanting Low, an analyst with Morgan Stanley in a research note released this week.

The note comes as GBP/USD recorded a third consecutive week of declines and hit an 11-month low at 1.3353 on November 11. 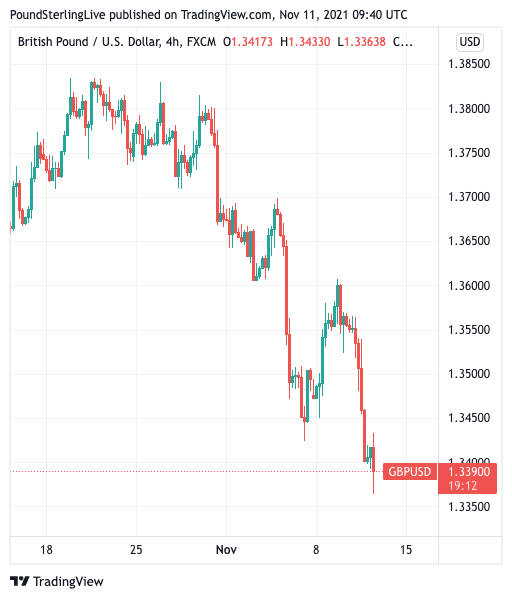 But Morgan Stanley finds the Pound could be set for some idiosyncratic outperformance which would aid a recovery in the GBP/USD exchange rate.

"With markets pricing in a reduced risk of overtightening, cleaner positioning and still very bearish sentiment on the GBP, we think this sets GBP up for a rally if growth data surprises to the upside," says Low.

"Overtightening" here refers to the fear that the Bank of England would rapidly raise interest rates, starting in 2021 and taking the Bank Rate to above 1.0% by the end of 2022.

This would potentially hurt economic growth and is considered by some economists to be a policy mistake as the Bank would likely have to reverse some of those hikes at a later date.

But the decision by the Bank of England to forgo a November rate hike and offer guidance that is consistent with rates staying unchanged in December means the risk of 'overtightening' is reduced.

Regarding the data that would trigger a recovery in the Pound, all eyes are on Tuesday's labour market statistics for an indication as to how severe the ending of the government's furlough scheme was.

Expectations are that unemployment rose in October following the scheme's completion in September.

The extent to which unemployment grew could influence how the Bank of England approaches policy going forward: a stronger than expected report could heighten expectations for a December rate hike.

On balance such an outcome would be supportive of Sterling.

"Good economic data should push UK real yields higher, driving the next leg higher in GBP," says Low. "If the growth and labour market data surprises to the upside, we think this will likely be GBP-positive."

But a disappointment could undermine any pro-GBP sentiment, making for a soggy end to 2021 for Sterling bulls.

Above: Economic data to watch, image courtesy of Morgan Stanley.

Morgan Stanley research finds Sterling to be caught in the cross-currents of concerns over slowing growth and rising inflation, the surprise hold by the Bank, negative Brexit headlines bearish sentiment on the currency.

The investment bank says the outlook for the GBP/USD is found to be dependent on three key factors:

1) Risk sentiment (currently supportive, the Pound tends to appreciate when markets are rising)
2) the UK 2s10s curve (short-term interest rate markets, determined by expectations on where the Bank of England will take interest rates)
3) long-end real yield differentials (how the yield paid on UK government bonds changes relative to those paid on the bonds belonging to other governments. Economic growth expectations, inflation expectations and central bank interest rates all play a role here).

A spate of weekly declines for GBP/USD come in sympathy with a broad push higher by the Dollar which is the top G10 performer of the past week and the past month.

Gains accelerated midweek following the release of stronger than expected U.S. inflation data which has now risen to 30 year highs, piling pressure on the Federal Reserve to consider accelerating the pace at which it ends quantitative easing and raises interest rates.

For GBP/USD the outlook therefore is very reliant on what the Dollar does from here.

Morgan Stanley expects Dollar strength going forward, helped by expectations for the Federal Reserve to raise interest rates in 2022, but gains are tipped to be more pronounced against the Euro and Yen.

This is understandable given the Bank of Japan and European Central Bank are likely to lag the U.S. Federal Reserve and Bank of England when it comes to raising interest rates.

Morgan Stanley hold a point forecast for the Pound-Dollar exchange rate at 1.40 by year-end, seeing a steady rise through 2022 to end the year at 1.44.