The Pound-to-Dollar exchange rate hit the psychologically significant round number of 1.40 in the early London trading session on Feb. 19.

The gains come amidst an ongoing uptrend in the UK currency which is 2021's top performing major. The U.S. Dollar is experiencing a decidedly more mixed year as improved global investor sentiment saps demand for the world's largest safe-haven.

The rally in the spot interbank rate to 1.40 means retail rates are trending higher, although it will require a stronger advance before those looking to transfer money can attain the same rate.

Banks are offering a GBP/USD rate of 1.36-1.37 for money transfers while independent providers are offering rates close to 1.38-1.39. 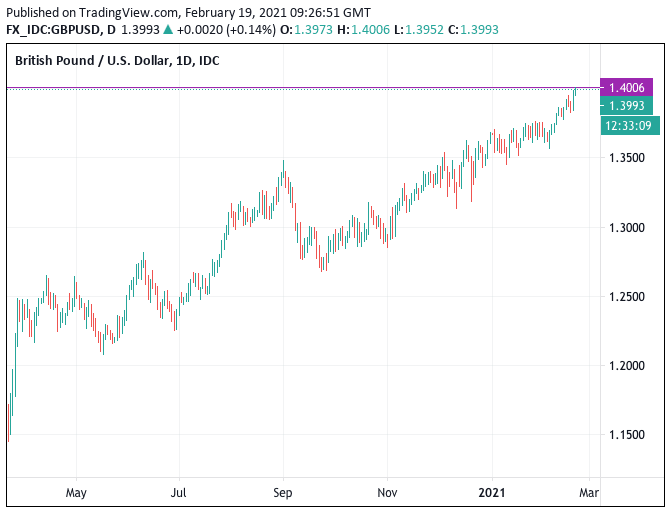 "GBP was once again the outperformer in G10, much to my embarrassment and chagrin. I had assumed the disastrous start to Brexit and the emerging vision of Brexit as not just a one-off event but rather as a never-ending series of negotiations and discoveries of baleful unintended and unforeseen consequences would eventually bring the pound down to parity with AUD if not NOK," says Marshall Gittler, Head of Investment Research at BDSwiss Holding Ltd.

A confluence of up to six or so positive drivers appear to be powering the advance in the British Pound:

"The fact that the pound is benefitting from the successful vaccine rollout may spell trouble for the dollar, because the US vaccine rollout, never very well managed under the Trump regime, is now being disrupted by the nationwide cold snap," says Gittler.

"Sterling broke through an important psychological level at $1.40 for the first time since April 2018. After some likely profit taking around this region you can now see GBPUSD start to look to edge up to around 1.44-45. Partly it’s a sign of emerging confidence in the UK’s economic recovery thanks to vaccines – and the end of the Brexit cliff-edge - but also just plain old dollar weakness," says Neil Wilson, Chief Market Analyst at Markets.com.

Encouraging data out of the UK economy ahead of the weekend has coincided with the fresh push higher in Sterling, with IHS Markit PMI data suggesting the economy did not contract in February thereby providing a springboard for growth over coming months.

The PMI report revealed businesses hoped that a rebound in customer demand after the national lockdown lead them to boost their appetite to retain staff and accelerate investment plans.

Business expectations for the next 12 months picked up in February and were the highest since April 2014.

"As such, additionally BoE stimulus is unlikely for now and the risk is GBP/USD sustains a rally further above 1.4000. GBP/USD remains undervalued compared to the level implied by real UK‑US two‑year swap rate differentials and the UK current account deficit is the smallest since Q1 2012," adds Haddad.

Seperately, the GfK consumer confidence index rose to -23 from -28 previously.

Much of the rise was due to improved expectations for the coming 12 months; in particular, confidence around the economic outlook rose to its highest level since last March.

The CBI meanwhile released the results of their monthly manufacturing survey, which helps build on the picture provided by the PMIs.

Manufacturing output fell slightly in the quarter to February, but at a more modest rate than in the first lockdown last Spring, according to the latest CBI Industrial Trends Survey.

The survey of 296 manufacturers also found that output increased in 11 of the 17 sub-sectors. However, growth in these sub-sectors was outweighed by sharp falls in others – particularly motor vehicles & transport equipment and food, drink & tobacco.

Looking ahead, manufacturers anticipate output to be broadly flat over the next three months, marking a notable improvement on expectations of a significant decline in January.

Total orders books improved, to a similar position as in December 2020, while export order books worsened on January. Both continue to be far weaker than their respective long-run averages.

Manufacturers also reported that stock adequacy weakened slightly from January and expect output prices to be broadly steady in the next quarter.