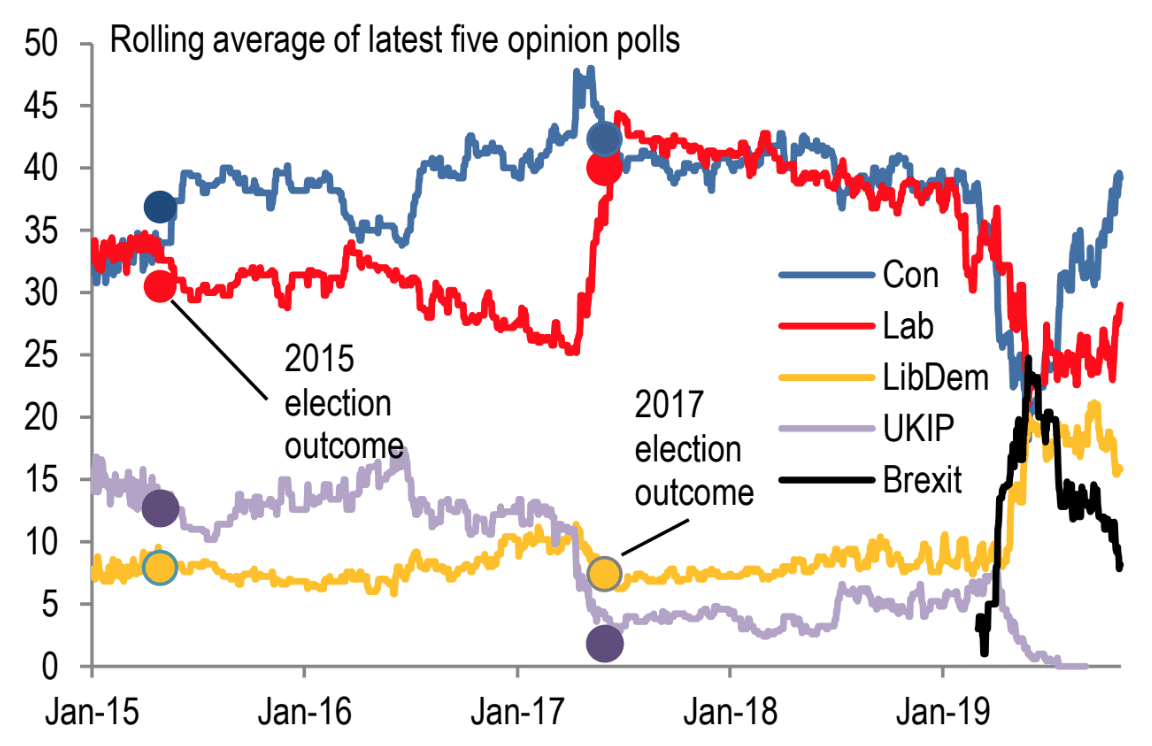 - Momentum shifting to downside after failing near 1.30 level.

- Further decline of Tory lead over Labour would weigh on GBP.

- YouGov poll due out at 22:00 Wednesday flashes on GBP radar.

The Pound was scraping along the bottom of the major currency barrel on Tuesday although further losses could be just around the corner, according to some analysts, because momentum is shifting to the downside on the charts just as election opinion polls are turning from tailwind into a headwind.

Sterling ceded ground to all major rivals Tuesday as earlier gains were unwound in response to further suggestions the Conservative Party lead over the opposition Labour Party is narrowing, forcing investors to contemplate the implications that a radical socialist economic agenda could have for markets. Some weekend polls had already tipped that as a possibility.

Kantar said Tuesday that support for the governing Conservative Party fell by two percentage points this week and that the radical opposition Labour Party picked up five percentage points. Polling work was carried out between November 21 and 25, which means respondents had more time to assess the opposition manifesto released on November 22 than they did the Conservative pitch that was unveiled only on Sunday.

The Pound had enjoyed a strong run higher throughout much of November as polls showed the Conservatives pulling ahead of Labour in key electoral battlegrounds although it wasn't until after the manifesto launches of 2017 that the polling gap between the two began to close in earnest. And with the subsequent narrowing of that lead ultimately producing a hung parliament investors are growing fearful of a repeat performance in the weeks ahead, prompting them to abandon the Pound on Tuesday.

Above: Pound-to-Dollar rate shown at hourly intervals. Click above for larger image.

Commerzbank had been betting on an increase in the Pound-to-Dollar rate and was targeting a move up to 1.3075 after having picked up the British currency when it was trading around 1.2841. However, the bank was 'profit-stopped' on its trade this week and is no longer recommending any action to clients, although Rudolph said Tuesday the one-to-three week outlook is negative so long as the market remains below the 1.3170 level and that further losses await if the 1.2768 threshold gives way.

Germany's second largest lender might not yet be willing to bet against the Pound but others are. Japan's MUFG, the world's fifth largest bank, suggested earlier this month that clients sell the exchange rate around 1.2826 and look for a move down to 1.26 ahead of the election. It stood by that recommendation late last week after a punishing sell-off over the course of Thursday and Friday.

"Our short GBP position is to take advantage of a potential pick up in political uncertainty in the run up to the election. The Tories already have a large lead over the Labour party in the opinion and it is unlikely to widen much further. Market participants will be reluctant to lift cable above the 1.3000-level until there is more clarity after the election," says Fritz Louw, a currency analyst in MUFG's London office. "At the same time, the incoming economic data flow from the UK has taken a negative turn recently." 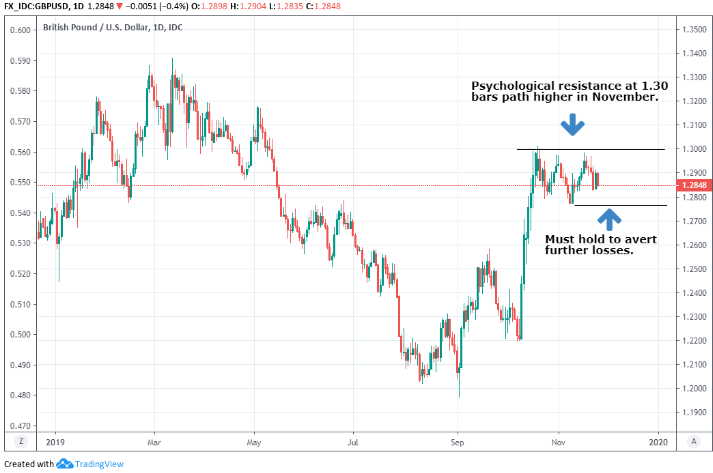 Above: Pound-to-Dollar rate shown at daily intervals, with Commerzbank levels highlighted. Click above for larger image.

"A surprise Labour win could send UK equities tumbling, despite a softer Brexit," says Jonas Goltermann at Capital Economics. "Labour’s manifesto is one of the most radical by a major party in a developed economy for several decades. While the party remains well behind in the polls, and the betting markets put the chances of an outright Labour majority at just 3%, there is a decent chance of a minority or coalition government led by Labour."

Capital Economics said Friday a Labour election victory would send the Pound to 1.20 against the U.S. Dollar, a level not seen since the early days of Prime Minister Johnson's leadership when fears of a 'no deal' Brexit were at fever pitch. That would put the Pound-to-Kiwi rate at 1.87, down from 2.00 Tuesday, if the NZD/USD rate was to still be trading around its current 0.6417 level on December 13 when the election result is announced.

A Conservative majority would likely mean the agreement struck by Boris Johnson in October takes the UK out of the EU but locks it into 'transition period' as the future relationship is negotiated. Crucially for markets, this would negate the threat of a 'no deal' Brexit, while electoral victory would spare the economy and Pound from years more of indecision and delay, if not worse, under an anti-Brexit opposition Labour Party government.

"Both "hung parliament" ramifications and Brexit transition risks are "underpriced" by the FX spot and options markets. The next major political flash-point for the UK and the GBP will be the release of YouGov's voter intention poll tomorrow evening at 22:00 GMT," says Stephen Gallo, European head of FX strategy at BMO Capital Markets. "Our best judgment is that a narrowing of the gap to materially less than 8% in favor CON should be short-term GBP bearish."