- Brexit dominates GBP, and PMIs the main release for USD

The Pound-to-Dollar rate is currently trading in a sideways range between roughly 1.2650 and 1.3300; and although it fell quite steeply last week from above the 1.3000 level to a close rate of 1.2828, on renewed Brexit concerns, as long as it remains within the range it is likely to trade familiar levels.

It is only really if the pair can successfully break out of the range that we could make a conviction call with any expectation of success. 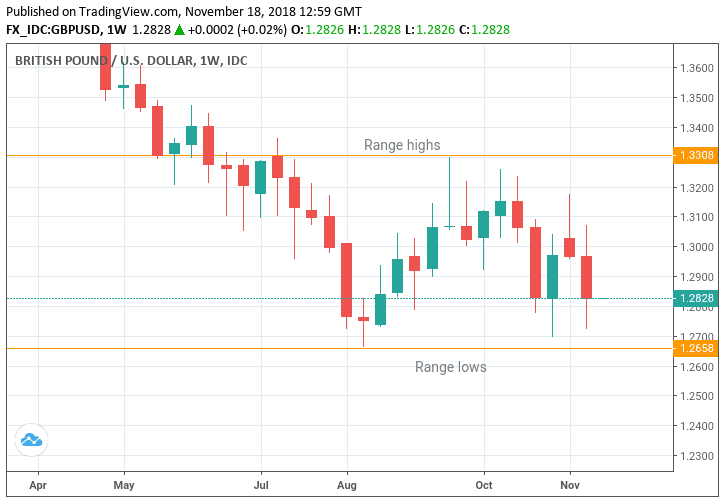 Sterling fell because fears of a ‘no-deal’ Brexit were heightened after the prime minister presented the deal she had reached with the European Union. The deal has drawn sharp criticism from members of her own party who believe it will ultimately lead to the U.K. failing to make a clean break from Europe.

Members of the Conservative party are now moving against May and we could see a threshold reached over coming days which might trigger a vote of no confidence in the Prime Minister. The Pound is likely, therefore, to start the week ahead on the ‘back foot’ and there is a marginal bias to expecting more downside since the short-term, as viewed on the 4hr chart, is technically down, based on the direction of peaks and troughs which have established a sequence lower.

If pushed to give a forecast, we would be marginally bearish, seeking confirmation from a break below the 15 November lows at 1.2722 and expecting a follow-through lower down to a target just above the range floor at 1.2660. 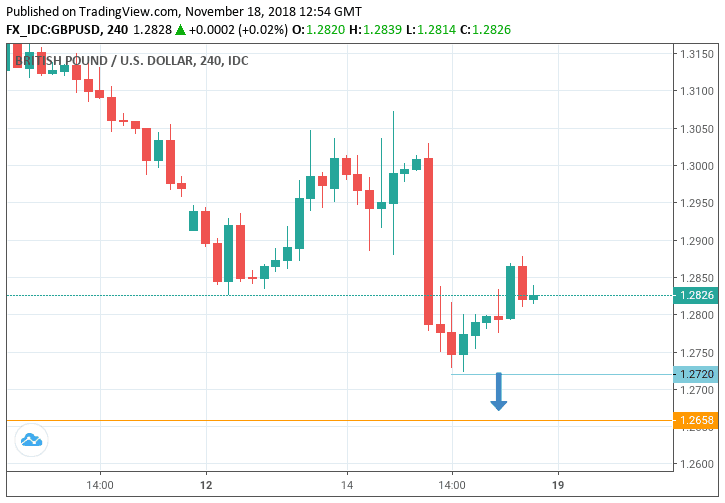 Of major concern to traders in the week ahead will be, firstly, on the political front, whether Theresa May can hang onto power, and, secondly, whether the new backstop agreement stands a chance of being approved by parliament.

If rebels within her own party can successfully mount a challenge it will probably come in the form of a vote of no confidence - potentially next week - and if successful will lead to a leadership challenge. Such a turn of events will almost certainly weaken GBP/USD, due to increased political uncertainty.

Ultimately our base case remains that the UK will avoid a ‘hard landing’ and the Pound will recover towards pre-Brexit levels in the 1.45 - 1.50 zone.

The US Dollar: What to Watch

Sentiment has turned negative against the Dollar after more cautious comments from members of the Federal Reserve (Fed) who suggested a perceived slowdown in global growth may rub off negatively on the US and that short-term interest rates have now risen to 'neutral’ (the rate at which the economy is neither growing nor slowing) which is where the Fed would like them to be, and, therefore, a sign it might pause in it's rate-hiking schedule.

If the Fed were to pause it would weaken the Dollar since there is already an expectation that it will raise rates again in December, and if it changes its mind, the consequent disappointment will probably weigh on the USD.

On the hard data front, November flash composite PMI are is probably the main release, out on Friday at 3.45 GMT, as it can provide an early indication of Q4 growth.

Researchers have found that the first two months PMIs in a quarter when averaged can be used to indicate growth for the whole quarter with a relatively high probability of success.

November Composite PMI is forecast to rise from 54.9 to 56.0 and if so this could indicate a rise in GDP growth rate in Q4, though the amount differs from country to country.

Another major release for the Dollar is Existing Home Sales in October, out at 16.00 on Wednesday, November 21. The metric is expected to bounce back to 5.15m from 5.2m in the previous month.

Existing home sales have been in decline ever since peaking in March, showing falls every month without fail. If they rebound in October it will mark a break of the 6 month run of uninterrupted declines and probably be positive for the Dollar since housing, according to the old Wall Street adage ‘leads the economy’.

Another major release for the Dollar in the week ahead is Durable Goods Orders in October, which are forecast to show a -2.5% change month-on-month from 0.8% in the previous month.

Durables is a volatile release, however, and large single orders especially in the transport and aviation sectors can skew the monthly data and render it volatile.

This appears to be what happened in September when durable goods orders rose 0.7%, propelled by defence aircraft orders which more than doubled, up 118.7%.

All eyes will be on prime minister Theresa May and whether she can hold onto power.

Importantly, there is confirmation that the U.K. can get further concessions from the E.U. - this is exactly what is required to allow the DUP and Conservative party opponents back on side.

In a Sky News interview May says the key to the outlook would be the next seven days, when her negotiators would be going back to E.U. officials and hammering out the "future relationship".

She will also be visiting Brussels, she added, and will talk to E.U. Commission president Jean-Claude Juncker as part of the week's discussions.

May needs further concessions and the E.U. can quite clearly see the plan they have brokered requires some help. This news is a Pound -positive development.

Conservative rebels seeking May's ouster might this week eventually muster enough votes - 48 are needed - to force a vote of no confidence in the Prime Minister. This would be a Pound-negative development.

If May loses the vote she is out, if she survives she is immune to another challenge for a year.

"To unseat PM May successfully would require a majority and it is much less clear
that this number would be reached," says MUFG's Loew. "If PM May was surprisingly defeated in a leadership challenge, we would expect the Pound to fall by a further 3% to 5%. It would heighten concerns over a 'No Deal' outcome."

May winning a vote would be Pound-positive as it does suggest the room for manoeuvre by 'hard brexiteer' opponents is fast running out.

There were expectations that May would be subject to a no confidence vote on Friday, November 16, but the threshold has yet to be met, suggesting the rebellion might in fact be stalling. As of the time of writing there still appears to be too few letters to trigger a vote of no confidence.

If it does stall, we see it as a positive trigger for a potential, partial, recovery in the currency.

A key event in the week ahead for the Pound is probably the Bank of England Inflation Report hearings conducted by members of the House of Commons Treasury Select Committee, a parliamentary body charged with oversight of the public finances.

The comments from the Bank of England at this hearing, especially in relation to the trajectory of the economy and the effect of Brexit, could impact the Pound.

Recent economic data including CPI and retail sales were lower-than-expected, while growth data suggests a slowdown in activity into year-end.

The other key release is the CBI industrial trends survey out at 00.00 on Monday, November 19. Although unlikely to move markets on their own, CBI surveys are usually good leading indicators of future economic activity and, therefore, contribute to formulating the overall economic backdrop in which to access the Pound.

Public sector net borrowing is out on Wednesday at 10.30. Borrowing came out at -3.26bn on October. Overall government borrowing has fallen over recent years.