The Pound to New Zealand Dollar exchange rate sustained its largest intraday loss for more than a month ahead of the mid-week session in the first sign that it may have topped out following a late November rout in global markets.

Pound Sterling was lower almost across the board on Tuesday after eking out gains over only the Euro and a handful of other local currencies as European financial markets lagged behind in a global rebound for risk assets that looked set to continue into mid-week.

“Markets are unwinding some of the omicron premiums built over the past week,” notes Bipan Rai, North American head of FX strategy at CIBC Capital Markets. “GSK reports that its antibody-based C-19 therapy is effective against omicron.”

The most significant stimulant of demand for risk assets and currencies was a further ebbing of market concerns about the threat posed by the newest mutated strain of the coronavirus following positive results from tests of vaccine efficacy against the Omicron variant.

“Sotrovimab, an investigational monoclonal antibody, retains in vitro activity against the full known Omicron spike protein, the new SARS-CoV-2 variant (B.1.1.529),” said GlaxoSmithKline and Vir Biotechnology in a joint announcement. 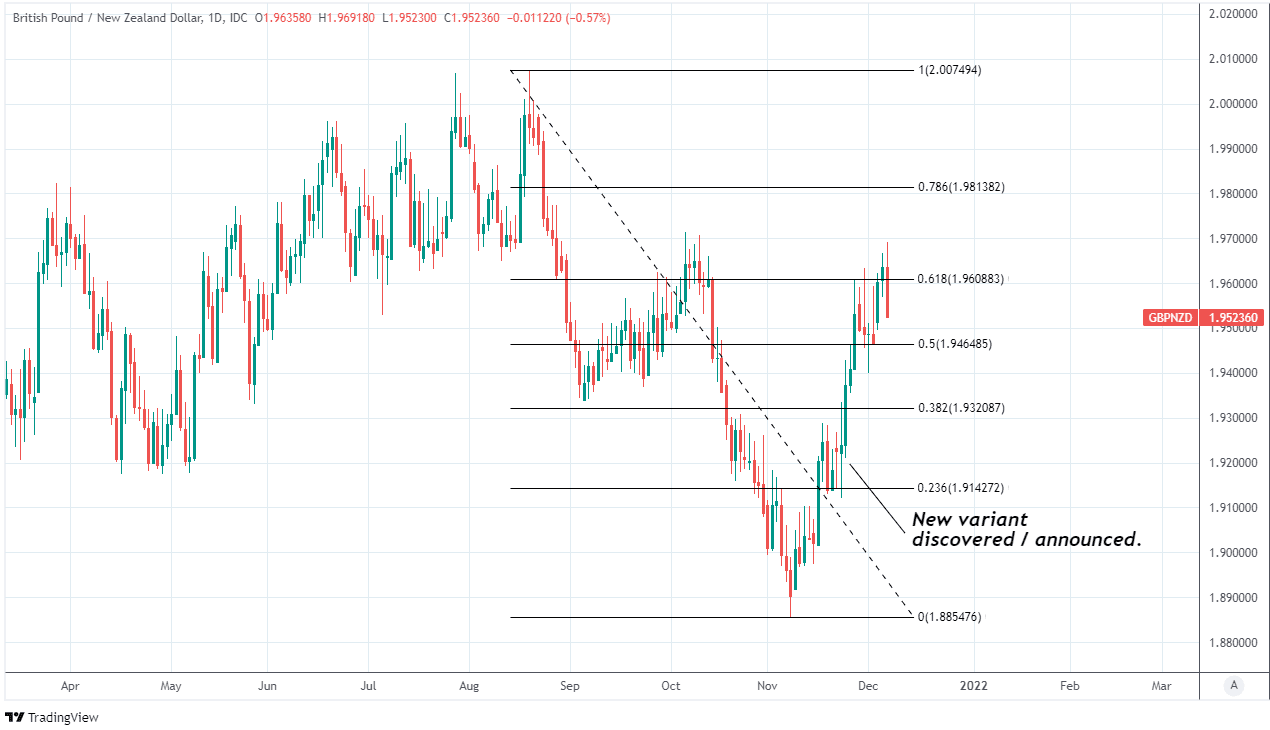 The Pound-to-New Zealand Dollar rate had previously rallied to early October’s highs, breaking above a notable technical resistance around 1.9608 along the way before Tuesday’s price action appeared to prompt a decisive reversal lower.

This was as renewed global market risk-taking proved positive first and foremost for commodity linked currencies like the New Zealand Dollar, which may also have benefited on Tuesday from a Global Dairy Trade auction in which prices of many Kiwi export commodities rose to varying degrees.

The dairy auction followed widely reported remarks from Reserve Bank of New Zealand Assistant Governor Christian Hawkesby, who was said to have told the 2021 KangaNews Debt Capital Markets summit that a stronger New Zealand Dollar would benefit the bank by helping to rein-in inflation.

It’s rare for the RBNZ to encourage market enthusiasm for the Kiwi Dollar, which had benefited throughout the summer from the bank’s pivot toward a normalisation of its interest rate policy that is widely expected to bolster the New Zealand Dollar’s yield appeal to investors over coming months.

“The NZD typically benefits from positive seasonality in December, but there’s no sign of that yet,” said David Croy, a strategist at ANZ, writing in a Tuesday morning research briefing to clients. 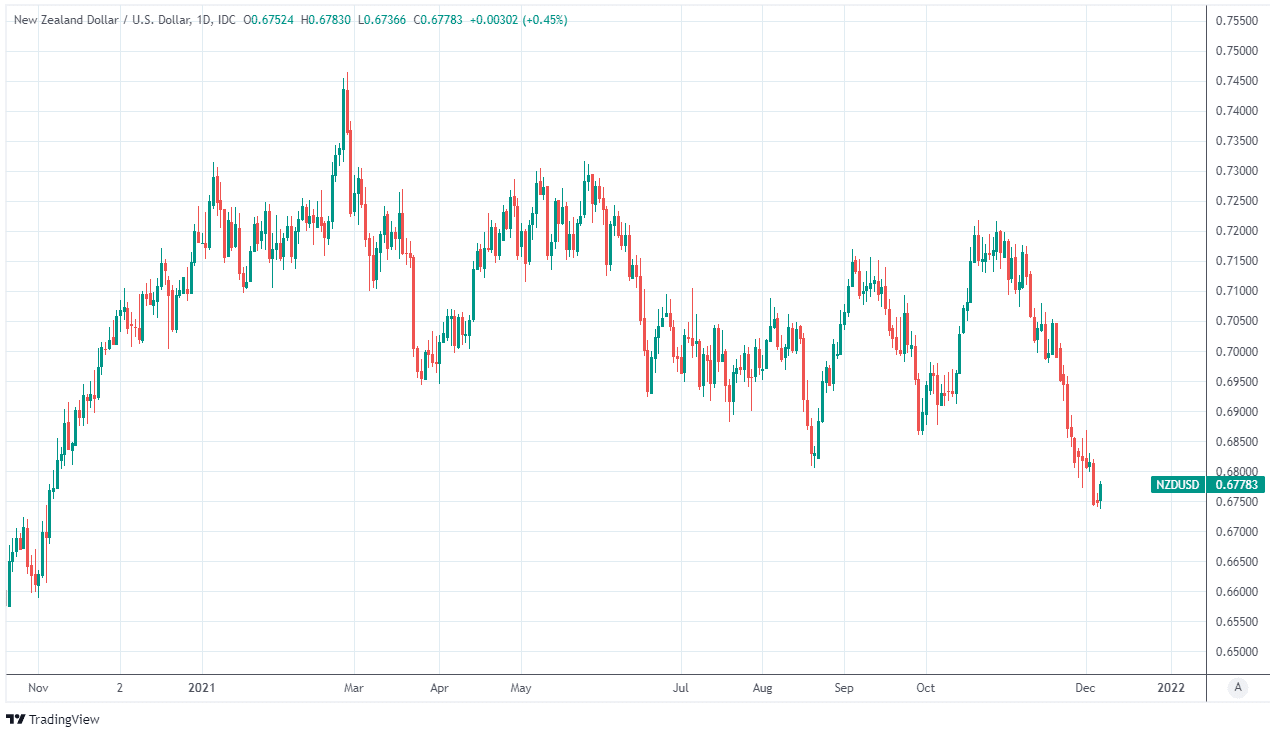 “FX markets seem fatigued with the New Zealand “good news” story, and are instead looking to downside risks as we head into 2022. These risks could challenge our published forecasts calling for NZD/USD to level off at 0.72 in 2022,” Croy and colleagues warned.

Concerns have so far been that the many times mutated Omicron strain of the coronavirus would prove to be a severe edition of the disease as well as resistant to existing vaccines, although and despite that it’s still early days it increasingly appears as if that may not be the case.

While Tuesday’s study results from GlaxoSmithKline and Vir Biotechnology suggested that some existing vaccines could prove to be effective against the new strain, U.S. chief medical adviser Anthony Fauci had told CNN previously on Monday that the illness caused by the strain appears to be mild.

This is in keeping with the reported experience of health authorities in South Africa where the new strain was first confirmed to be a newly mutated edition of the coronavirus, with the experience there being one of high transmission but low severity in terms of the illness caused.

All of this is potentially a boon for risk currencies like the Kiwi Dollar and a bearish omen for the Pound-to-New Zealand Dollar rate going forward.

“USD is down mostly versus commodity sensitive currencies. Easier monetary policy in China and cautious optimism that Omicron is less severe than Delta are supporting risk assets and the commodity complex,” says Elias Haddad, a senior currency strategist at Commonwealth Bank of Australia.

“As reported by the Financial Times, early hospital data from South Africa suggests that Omicron could result in less severe illness and has so far not overwhelmed intensive care units,” Haddad wrote in a Tuesday briefing to CBA clients.