The New Zealand Dollar outperformed all major currencies other than a revived Pound Sterling Wednesday as an ongoing rally by the Chinese Yuan weighed on greenback while lifting other riskier prospects, although appetite for the Kiwi might be tested by second-quarter GDP data due out overnight.

New Zealand’s Dollar advanced widely with its strongest gains coming at the expense of European currencies except for Pound Sterling, which was revived by speculation that a UK government climbdown or capitulation over its controversial Internal Market Bill could be in the pipeline.

Gains came with the U.S. Dollar on the backfoot relative to all major rivals except for the Danish Krone although this and strength in the Kiwi and weakness in the greenback was closely connected to both September's Federal Reserve decision and an almost relentless recovery of the Chinese Yuan.

“The market’s perception that the Chinese economic recovery is picking up steam has been supportive as has been the expectation that this year’s slump in domestic activity will be less severe than expected just a few months ago,” says Jane Foley, a senior FX strategist at Rabobank, who forecasts a year-end GBP/NZD rate of 1.93 and an NZD/USD rate of 0.65. “On the back of the better economic data we have revised up our forecast for NZD/USD. However, we continue to see risk of a decline in global risk appetite weighing on NZD/USD.” 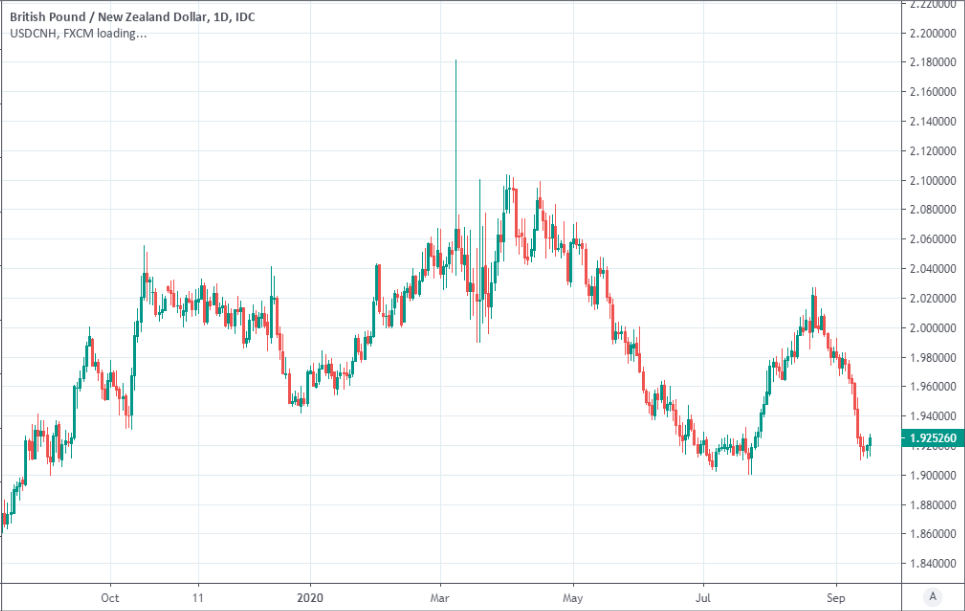 The Yuan clocked up a fourth consecutive gain that sent USD/CNH to its lowest since May 2019 and the last major escalation of tensions with the U.S.

This is after China reported its very first increase in retail sales for 2020 on Tuesday while industrial production numbers also surprised on the upside, bolstering market perceptions of a strengthening economic recovery that’s supportive of both the New Zealand economic outlook as well as currency.

Yuan strength, which is at least in part a direct result of decisions taken by the Chinese state, has been a key driver of Kiwi outperformance of late but it’s not the only driver. New Zealand’s Dollar actually began its recovery from the coronavirus crater of March sooner than the Yuan.

“AUD/USD and NZD/USD are firmer above 0.7300 and 0.6730 respectively, underpinned by a stronger CNH,” says Elias Haddad, a currency strategist at Commonwealth Bank of Australia. “New Zealand’s Pre‑election Economic and Fiscal Update (PREFU) turned out to be surprisingly similar to the Budget...The ratio of debt to GDP for 2024 has lifted nearly 2pts to 55.3%, primarily because the level of nominal GDP is forecast to be slightly lower.” 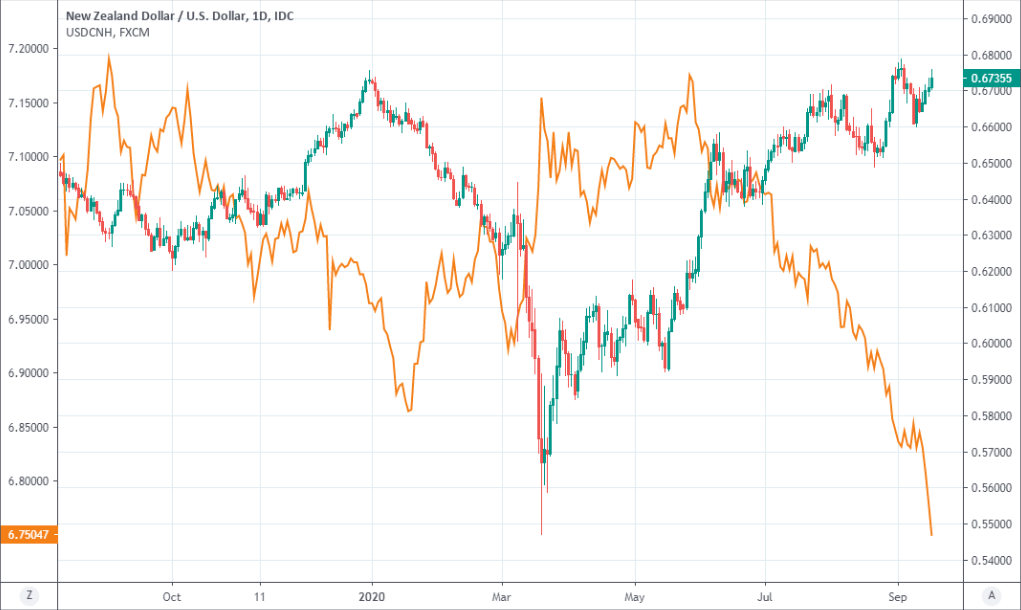 Much of the earlier NZD/USD rally resulted from New Zealand’s outperformance of other countries in initial efforts to contain the coronavirus, as the antipodean country was first to almost eradicate the disease despite China being its largest trade partner and second largest source of visitors after Australia.

That initial outperformance led investors and analysts to believe the coronavirus fallout would be less than in other countries and the recovery quicker, while New Zealand’s more prudent and frugal management of the national balance sheet bolstered the investment appeal of the Kiwi currency.

Other countries’ past budget policies combined with an extraordinary, if-not crippling costs of the pandemic and radically reduced bond yields the world over, have left investors wary of buying some currencies while bolstering the appeal of the Kiwi and Aussie.

But Wednesday’s second-quarter GDP data, due at 23:45 London time, will either test or bolster investor appetite for the New Zealand Dollar.

"The GDP figures due Thursday will “officially” confirm NZ suffered a deep recession over the first half of the year. We’re forecasting a quarterly contraction of 11%. A terrible outcome undoubtedly, and easily the largest decline on record, but still a lot better than the circa -20% forecasts that were doing the rounds in March/April. The general run of the economic green since the June quarter has also pleasantly surprised," says Mike Jones, a senior economist at ASB Bank.

Consensus is looking for a -12.5% quarter-on-quarter fall to extend the -1.6% decline recorded for the opening months of the year, although some local firms including ASB see the contraction coming in as less than that, which might be enough to encourage further outperformance by the Kiwi Dollar.

Any disappointment could lead investors to question their assumptions about the recovery, which may in turn weigh on the Kiwi. Especially as the Reserve Bank of New Zealand has spared no rhetorical expense in assurances that it's prepared go as far as necessary to underwrite the recovery. 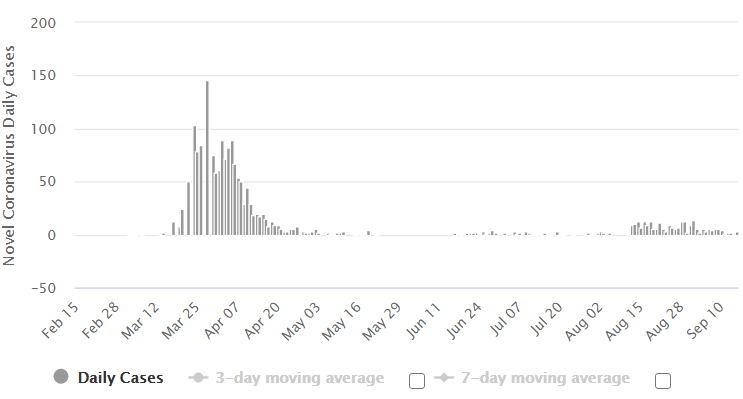 "While the outlook for 2020 may have improved, it has been balanced by the recognition that the impact of covid-19 is likely to last for longer," Foley says. "Borders remain closed and while there could be some softening of the impact through the development of safe travel zones, industries such as tourism and education are likely to suffer prolonged negative effects. In addition, slower global growth over the medium-term will have a broader impact on trade."

Last quarter's GDP will feed directly into perceptions of exactly how much fiscal and monetary support is needed from the government and RBNZ to pull the economy out of the coronavirus trough and produce the steady 2% inflation rate coveted by most developed world central banks including New Zealand's.

The RBNZ's interventions have so-far managed to sink the Kiwi for only short periods before international demand returns, although the threat of a less investor friendly policy bent might be serving as an ongoing form of restraint that prevents the market from getting carried away with the currency.

"For every day that goes by with no prospect of the borders re-opening, no proven vaccine, and ongoing global scrambling to contain COVID-19 flare-ups, the more the medium-term outlook gets foggier," warns ASB's Jones. "This is what we’re attributing to last week’s further ramp up in market speculation of RBNZ OCR cuts. In fact, yields on several NZ fixed income instruments briefly fell into the negatives for the first time ever. One for the scrapbook."

The RBNZ has cut New Zealand's cash rate to a record low of 0.25% and launched a maiden programme of quantitative easing or bond buying under which it intends to hoover up as much as NZ$100bn of government debt.

But it's also said on multiple occassions that negative interest rates are a likelihood and has warned the market that it could turn to foreign asset purchases to support the recovery, which would involve large Kiwi Dollar sales that have the effect of weighing on New Zealand's exchange rates.

"The possibility of negative rates from the RBNZ remains on the table dependent how the economy fares in the coming months. while the broader outlook for risk will depend on issues such as US/China tensions and potentially issues around the US election. Not only will US suspicions of China remain irrespective of who wins the US presidential election, but there is the possibility of an contested outcome, social unrest in the US and fears that the next round of Us fiscal stimulus will be late and/or insufficient," Foley warns. "A combination of these factor could depress risk appetite and increase demand for the safe haven USD which would be reflected in USD crosses across the board."