The New Zealand Dollar has been an out-performer in the financial market recovery that has been in place since March, notching up advances against the majority of its G10 peers owing to a ongoing positive relationship with global stock market and a view that the country was well placed to recover from the covid-19 crisis having effectively eliminated community transmission of the disease.

But, the Kiwi Dollar rally faded around mid-June in sympathy with the topping out of the S&P 500, which is widely considered to be a benchmark for global investor appetite.

"The rallies in the Antipodean currencies have stalled in line with the rally in equities. The tug-of-war between improving global economic data and the growing risk of a second-wave of Covid-19 infections has left investors in a holding pattern," says Valentin Marinov, Head of G10 FX Strategy at Crédit Agricole.

The New Zealand-U.S. Dollar exchange rate is particularly interesting in that it has respected the stalling in the S&P 500: 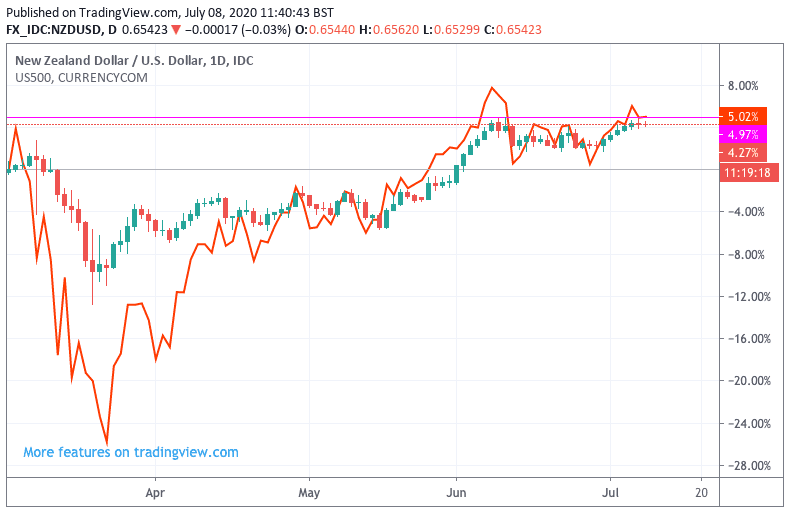 The NZD/USD tends to be a driving force behind other Kiwi Dollar exchange rates, such as GBP/NZD and EUR/NZD and therefore a break higher in S&P 500 could well be the trigger to further gains right across the New Zealand Dollar exchange rate complex.

For now, equity markets are struggling to find traction particularly as investors remain concerned with the surge in covid-19 cases in the United States which could well dent the global recovery.

"Signs are mounting that the latest re-closures in the most populous US states have put the breaks on the economy’s comeback, with weekly data released by the New York Fed yesterday pointing to a renewed dip in growth," says Marios Hadjikyriacos, Investment Analyst at XM.com.

For now it appears that the U.S. will resist another nationwide lockdown and the preferred route is to impose localised lockdowns, which ultimately means a large scale capitulation in 'risk on' financial assets such as the New Zealand Dollar is avoided.

As such, one senses that the trend of appreciation could restart soon particularly if markets are reminded that covid-19 doesn't kill economies, lockdowns do.

The country - having virtually erased the community transmission of covid-19 - has opted to implement a strict quarantine on inbound traffic which is highly problematic for a small, open economy such as New Zealand's that relies heavily on tourism and students.

Therefore, where once we saw government policy as being supportive of a fast rebound in the economy, now it looks to be more of a hinderance.

"While the borders of NZ’s trading partners remain closed, NZ’s economy will continue to struggle given the negative impact these lockdowns have had on its important tourism and education sectors. The RBNZ will also cap gains in the NZD by continuing to threaten further easing if the NZD strengthens with this easing potentially including negative rates as well as foreign bond buying," says Marinov.

New Zealand on Tuesday began restricting the return of its own nationals Tuesday as the country faces an accelerating influx of citizens fleeing coronavirus outbreaks overseas and limited quarantine facilities.

National carrier Air New Zealand put a three-week freeze on new bookings and the government is in talks with other airlines to limit capacity, officials said.

New Zealand has gone 67 days without any cases of coronavirus in the community and its 22 active cases are all in managed quarantine facilities for New Zealanders flocking home from worsening epidemics elsewhere.

There are nearly 6,000 people currently undergoing the mandatory 14-day quarantine in the facilities and another 3,500 are due to arrive this week.