The Pound-to-New Zealand Dollar rate has been volatile of late but is now tipped for a period of narrower range-trading as the Kiwi currency demonstrates a tenacity that's taken some analysts by surprise.

Pound Sterling has seen highs of around 2.10 and lows of 1.99 against the Kiwi in the last week, making for a wide 5.5% variance as both currencies were swept up in a financial market storm that drove U.S. Dollar Index up by more than 7% in the fortnight leading into the weekend.

Market volatility has since normalised but the Pound-to-New Zealand Dollar rate has traded largely without any clear directional bias at all. Normally when volatility abates and investor risk appetites recover the Kiwi could be expected to outperform Sterling and push the Pound-to-Kiwi rate lower while time of rising risk aversion would typically benefit the larger and less commodity exposed Pound. But that relationship no longer holds in the current market.

"It's hard to differentiate drivers; expect more range-trading. UK now in lockdown too; both economies to be severely tested," says ANZ's David Croy. 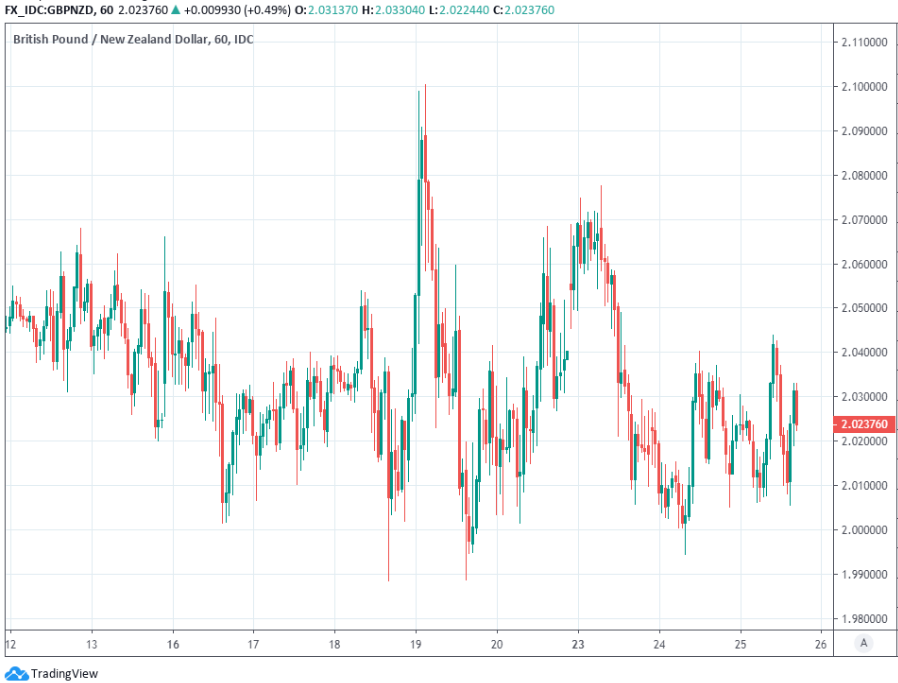 Croy tips the Pound-to-New Zealand Dollar rate to trade between 2 and 2.0618 over the coming days, a much narrower range than that which prevailed in the prior week. Docile price action is anticipated just as the UK and New Zealand enter a 'lockdown' period in which citizens are advised to remain at home rather than go to work, as well as to avoid unnecessary contact with other people.

"Failure of anyone to play their part in coming days will put the lives of others at risk, and there will be no tolerance for that. We do not expect to use the full extent of these measures but, as with everything we have done in response to COVID-19, we plan, we prepare, we have in place everything we need to get through. For now, I ask that New Zealanders do their part. Stay home, break the chain, save lives," - PM Jacinda Ardern.

Coronavirus-related 'lockdowns' are expected to severely damage economies in which they're implemented, with some firms forecasting major economy GDP numbers could fall more than 20% in the second quarter as normal life stops and consumption is hindered by the closure of many businesses. 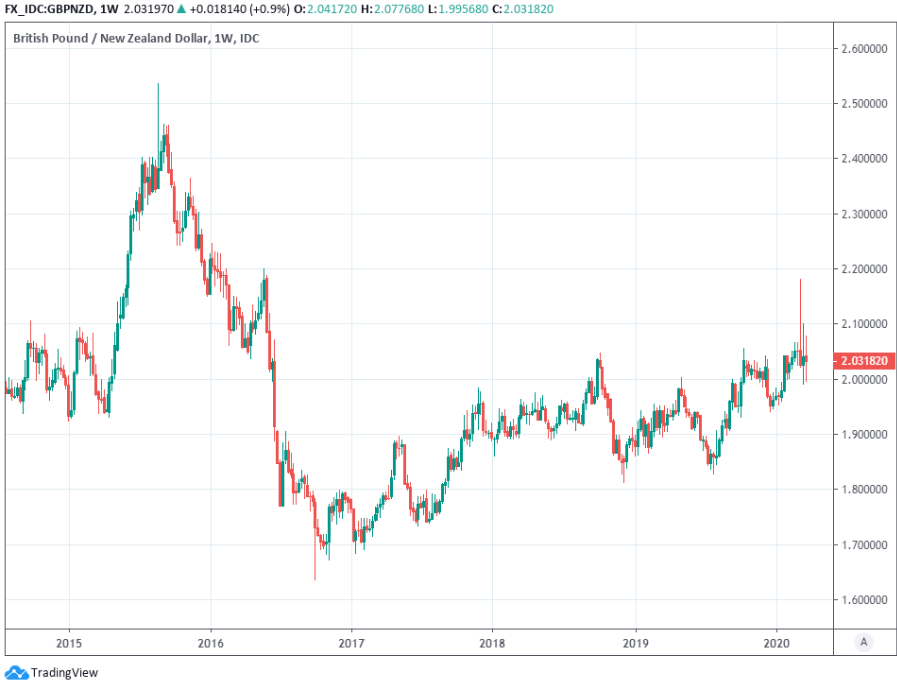 Governments in both countries have announced large financial support packages for businesses and households to help them through the shutdown while both central banks have cut interest rates to the 'zero lower bound' and announced large quantitative easing programs that will enable them to force down real economy borrowing costs by crushing yields in the bond market.

Investor fears over what lockdowns and the resulting policy responses might mean for economies and markets in the long-term have driven a stampede into the U.S. Dollar, demand for which has been a prominent driver of the GBP/USD and NZD/USD rates. The Pound-to-New Zealand Dollar rate is effectively the sum of GBP/USD over NZD/USD, with movements in GBP/NZD reflecting the relative change between the two major exchange rates.

"NZD’s tenacity has been impressive," Croy says. "Technically, NZD looks to be topping out and is running into resistance which should cap rallies." 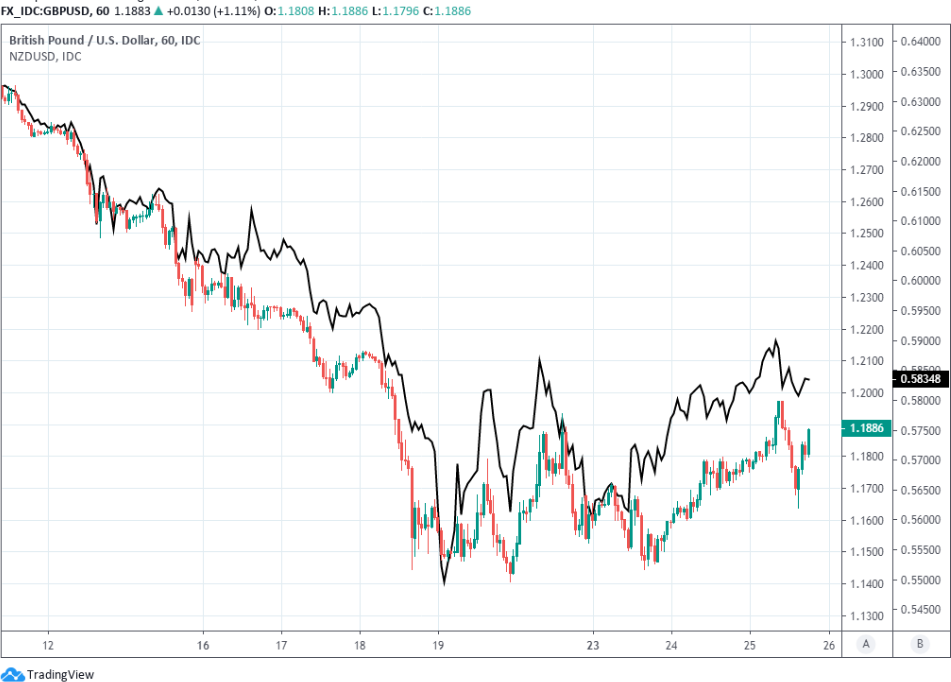 Croy says the NZD/USD rate should meet technical resistance at the 0.5850, which is not far above Wednesday's 0.5830 level, implying the exchange rate could decline once its reached that threshold. A falling NZD/USD rate would lead to a rising GBP/NZD rate if GBP/USD holds its own or manages to advance. GBP/USD was 0.18% higher at 1.1816 on Wednesday while NZD/USD rate 0.10% higher at 0.5830, translating into a 0.18% gain for a Pound-to-New Zealand Dollar rate that was quoted around 2.0267.

The rub for the Pound is that GBP/USD is encountering resistance that's also expected to provoke a correction lower which, if playing out alongside an NZD/USD retreat would confine GBP/NZD to the narrower range envisaged by Croy. So long as the two declines are of a similar scale. Should GBP/USD fall further or faster than NZD/USD, the Pound-to-Kiwi rate would be in trouble. 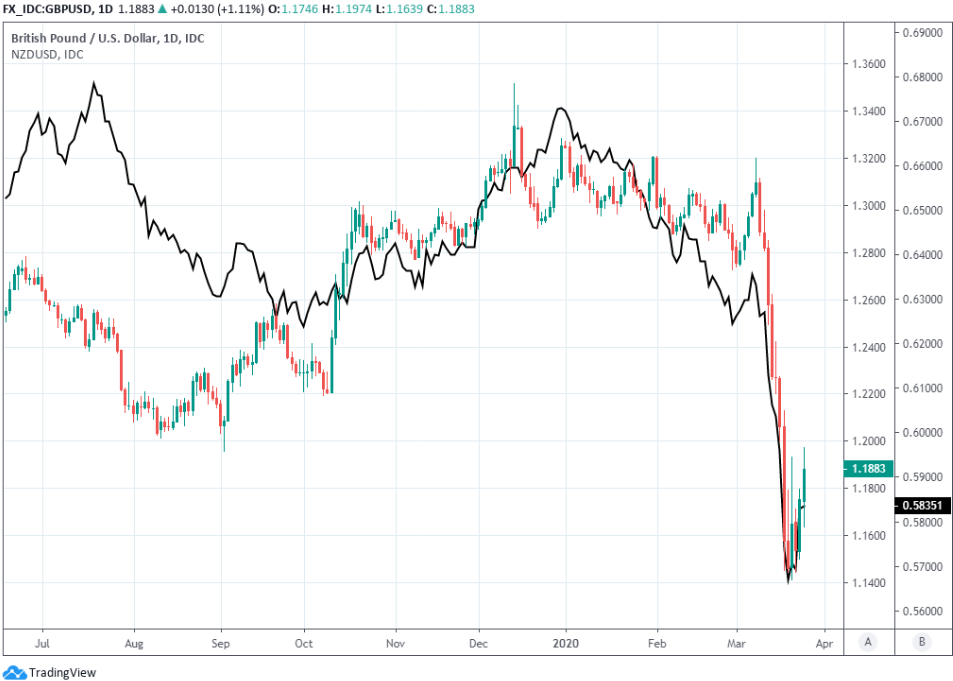