- New Zealand Dollar to be moved by risk trends

The GBP/NZD exchange rate is trading at around 2.0270 at the start of the new week after rising 1.95% in the week before. Studies of the charts show the pair has reached a key level where it is encountering tough resistance, but a break to a new high would green-light further upside.

The 4 hour chart - used to determine the short-term outlook, covering the next 5 days - shows how the pair was rising in an established uptrend but then pulled back after reaching double parity and touching the October 2018 highs. 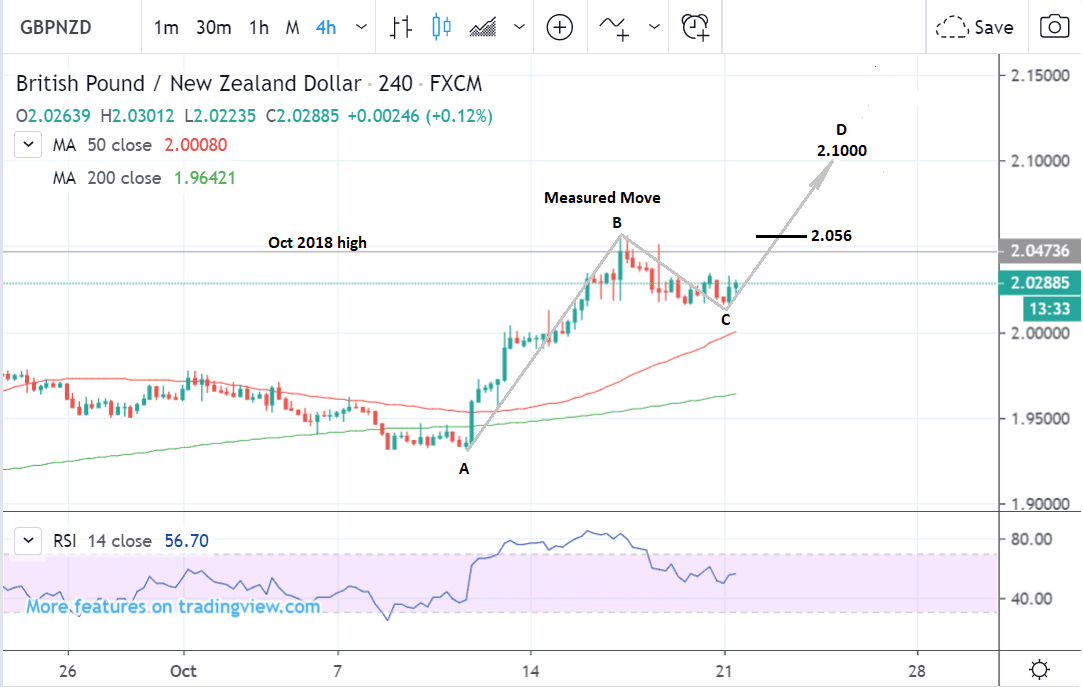 The pullback is relatively shallow and this strongly suggests the uptrend will eventually resume.

A break above the 2.056 highs would probably confirm a continuation up to a target at 2.1000 eventually.

Another interpretation is to see the pair having formed a bullish pattern known as a ‘measured move’ or ABCD pattern.

These patterns are essentially 3-wave zig-zags, where wave’s A-B and C-D are normally roughly the same length, or related by 61.8%.

Using the measured move hypothesis and taking evidence from the other time-frames into account this suggests an end-target at 2.1000.

The daily chart shows an even larger measured move pattern with an upside target at 2.1000. 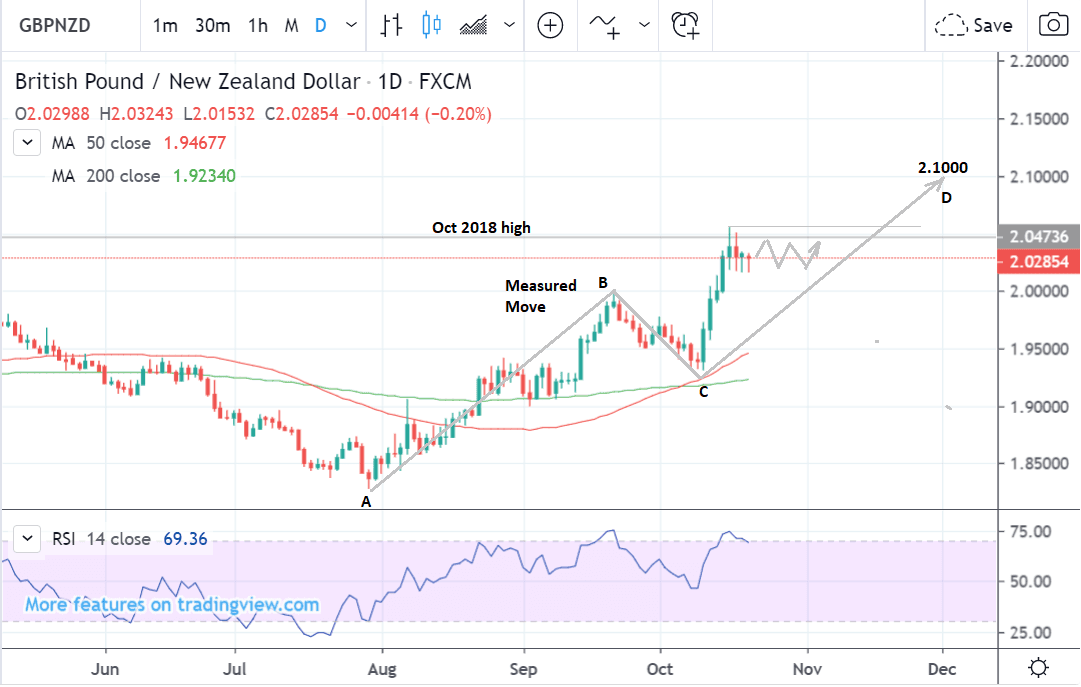 The RSI momentum indicator is in the overbought zone, however, indicating a risk the exchange rate may pull-back or enter a sideways trend.

A break above the 2.056 level, however, would provide added confidence in the bull trend and lead to a probable move up to the next target.

The weekly chart shows how the pair has risen up and touched the key October 2018 highs. 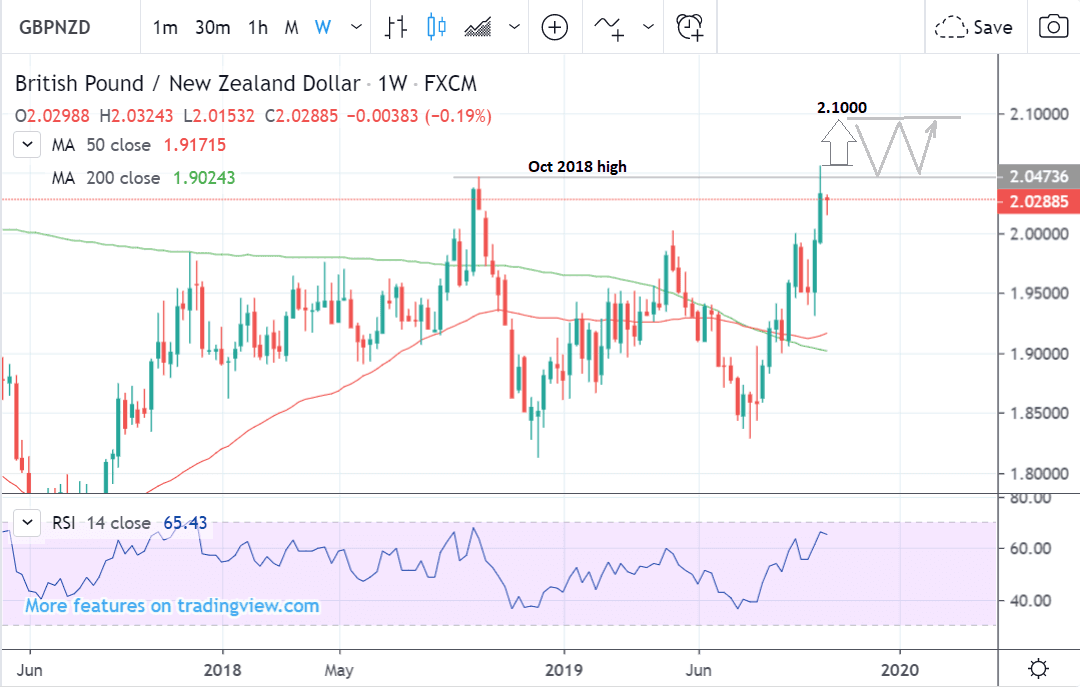 A clear break higher will probably see the pair continue up to a target at 2.1000.

There then follows a risk of a pull-back down into a sideways consolidation period, with a potential floor at circa 2.0400.

The main drivers of the New Zealand Dollar are broad investor risk appetite and the strength of the U.S. Dollar, to which the Kiwi is negatively correlated.

The New Zealand Dollar is currently supported by a benign global backdrop from improved trade ties between the U.S. and China, and a breakthrough in Brexit negotiations.

The ‘Phase 1’ U.S - China trade deal remain on track for the conclusion once the texts are finalised and the two parties sign; the only thing is when this happens, which is unclear.

The latest comments from U.S. commerce secretary Ross suggests there may be a delay because the President wants “the right deal” and “it doesn’t have to be in November.”

“The key thing is to get everything right that we do sign. That’s the important element. That’s what the president is wedded to. Whether it’s this day or that day might be interesting to the media, but it isn’t the real game,” says Ross.

On the Brexit front, the outlook looks positive for risk markets and the Kiwi. According to analysis carried out by the Guardian newspaper, Johnson’s deal could carry the house when it is put to a vote, with 320 probably voting for and 317 against.

If it does win a majority it will probably result in upside for the Kiwi (and the Pound). 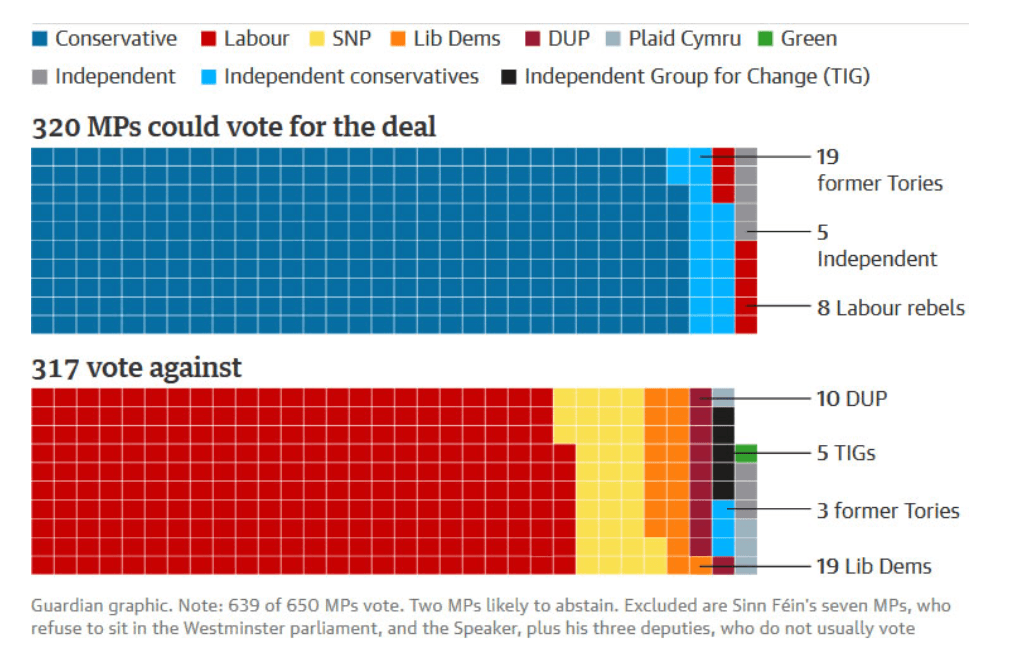 Yet regardless of whether the deal wins or not, the alternative, probably a general election, is not so bad either; and it now seems Parliament has successfully blocked a ‘no-deal’ Brexit, and could block it again given the present composition of MPs.

The U.S. Dollar is falling quite steeply and this is supporting all other currencies, especially NZD.

The NZD/USD pair has also found long-term support at the base of a 4-year range which further suggests a bias to a rebound higher, supporting the Kiwi.

There is a lack of market moving data out for the U.S. Dollar in the week ahead making it difficult to forecast the likely impact of fundamental factors on the Kiwi.

But overall the fundamental backdrop from a risk appetite perspective appears supportive, in the short-term, at least.

“Potential US-China trade war de-escalation, a soft Brexit and a more positive US yield curve would be some fundamental reasons to have a less bearish view of the NZD at this juncture,” says Jason Wong, strategist at BNZ Bank.