Stock markets extended a short-term trend of depreciation over the course of the past 24 hours, a scenario that would typically lead to some Pound Sterling weakness. However, the Pound lead the field:

Above: GBP gains on Thursday

"Sterling topped both the euro and dollar as it climbed to nearly five-month peaks against latter. The pound’s rise in the face of lower stocks and weaker risk appetite made the move all the more confounding," says Joe Manimbo, Senior Market Analyst at Western Union. "Sterling continues to benefit from broad based dollar negativity. A key test of sterling strength will come in the early days of August when month-end rebalancing will have evaporated."

The gains leave the Pound at the top of the leaderboard at the start of the final session of the week:

Above: GBP performance over the past week

"This GBP move is making me apprehensive - Sterling is rallying despite high beta FX (& other risk assets) selling off," says Michael Brown, Senior Market Analyst at CaxtonFX. "I’m keen to see whether cable pulls back - which I think it should - once the mess of month-end flows are out of the way."

Although analysts are struggling to find a narrative to pin the gains to, the currency has nevertheless managed to reverse its deficit in place against most of the majors at the start of July: 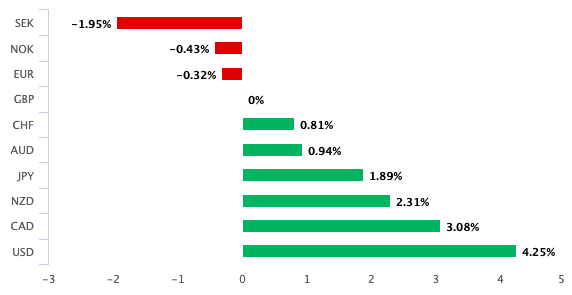 Above: GBP performance in July

"Does somebody also know something we don't on the Brexit negotiation front?...because it’s hard not to notice EUR/GBP’s 50pt plunge and how it quickly propped GBP/USD right back above the 1.2970s when it commenced at 4amET this morning," says Erik Bregar, Head of FX Strategy at Exchange Bank of Canada.

For sure, there is no obvious trigger to the rally in the Pound, but we maintain a view that we first mentioned in an earlier report out this week that two notable themes are likely to be in play:

1) the UK economic recovery is picking up some pace and the country won't therefore necessarily lag its European neighbours, a scenario that had become a pretty popular assumption amongst analysts. It also certainly screens well against the U.S. where a resurgence in covid-19 cases has blunted the recovery.

On the economic front, fresh evidence that the economy has the potential to outperform comes from the latest UK Economic Sentiment Indicator (ESI) which rose from 65.2 in June to 75.5 in July. According to Ruth Gregory, Senior UK Economist at Capital Economics, this "is clearly good news and chimes with the evidence from the high frequency data that the recovery that began in May has continued at the start of Q3."

2) the odds of a post-Brexit trade deal continue to inch higher, even if the official line is that the two sides are still far apart.

The Pound started the week strongly, with sentiment boosted on Monday courtesy of a press report that the EU's Chief Negotiator Michel Barnier told EU ambassadors that he is confident a post-Brexit trade deal will still be reached.

“I remain confident that a balanced and sustainable deal remains possible, even if less ambitious,” Barnier told the gathering, according to a Reuters report that quoted sources present at the meeting, adding that London seemed more interested in pursuing only a “low-quality, low-profile” deal.

Barnier's latest comments contrast to the official narrative he presented following the cessation of official negotiations in London on the previous Friday, where he stressed time was running out and that a 'no deal' was becoming increasingly likely unless the UK yielded further ground.

That Barnier is confident of a deal is quite notable, given that at the same point in the tenuous and tortuous Withdrawal Agreement negotiations such signs of optimism were rare indeed.

Looking at the timelines involved a deal would likely be reached by an October meeting of EU leaders, until then expect the official line to be that the two sides remain far apart, even if they are inching towards an agreement behind closed doors.

There could well be an element of catch up in the market underway whereby investors have been recalibrating their view on Sterling on the basis that a deal should ultimately be signed in the Autumn. Make no mistake, the kind of 'bare bones' trade deal the UK is seeking will increase trade frictions between the UK and its most important trading partner, however there will be some long-lacking certainty for businesses, investors and individuals to latch on to.

Sterling dislikes uncertainty, and providing certainty in itself is enough to allow for gains.

"Sterling has been somewhat caught in the middle between an appreciating euro and a depreciating dollar. As attention moves from the EU Recovery Fund possibly toward the ongoing Brexit talks we see potential for sterling to rally on positive sentiment around those discussions. We continue to expect progress in these talks to open the door for an agreement likely in autumn. We also expect the UK economy to continue to catch-up with the rest of Europe," says Gaétan Peroux, Strategist at UBS.

However, there is a likelihood the gains experienced by Sterling will fade in the coming week, with markets eyeing Thursday's Bank of England policy meeting where we would expect new forecasts and guidance on future monetary policy to be announced.

This could curb enthusiasm to the currency next week and we could well see some declines.

Indeed, while surveys and other indicators suggest the UK economy is picking up speed, there remains a concern the ending of the government's furlough scheme will prompt a surge of unemployment in the Autumn, which could well prompt the Bank of England to strike a cautious tone next week.

The rule of thumb is that such caution is greeted by Sterling weakness.

"We still think that sterling is not reflecting the substantial weakness in the economy we foresee. At the same time our outlook for the eurozone economy is not optimistic either. We still expect a double dip at the end of this year/start of next year because of negative second round effects such as deteriorating labour market and bankruptcies. Because of these offsetting forces we expect EUR/GBP to remain in a 0.90-0.92 range for much of the coming year," says Georgette Boele, Senior FX Strategist at ABN Amro.

The Bank of England is expected by economists at some point prior to year-end to announce an expansion of quantitative easing, which will add to the downward trajectory in UK gilt yields. Typically, falling gilt yields act as a downward drag on a currency and therefore the prospect of yet lower yields is a negative mark on Sterling's outlook.

It could be that the recent strength in the Pound is therefore a short-term phenomenon and that coming weeks see a return move lower. Those with outstanding international Sterling payments should therefore look at current levels as an opportunity.