The British Pound staged a strong relief rally against the Euro, U.S. Dollar and other major currencies on Monday in a move that looks to be largely technical driven in nature.

The Pound-to-Euro exchange rate rallied by three quarters of a percent to retake levels above 1.10, and is being quoted at 1.1062 at the time of writing. According to one market professional the EUR/GBP exchange rate is apparently the epicentre of today's action and the reversal from a key resistance area is in turn responsible for wagging other crosses, including GBP/USD.

"What's driving the Euro lower, you ask, given deal being touted over the EU Recovery Plan? It is not quite a done deal, and, more importantly, the pressure is coming from the cross against GBP. Key reversal unfolding. Close is key, roughly GBP 0.9060, the pre-weekend low," says Marc Chandler, analyst at Bannockburn Global Forex.

"Sterling is staging an impressive rally ... but this honestly feels like repositioning ahead of something positive on the Brexit front this week, as opposed to strength on broad USD weakness," says Erik Bregar, Head of FX Strategy at Exchange Bank of Canada. "We haven’t come across a positive headline per se, but it’s hard not to notice the complete implosion for EURGBP back down into the mid 0.90 handle."

The Pound-to-Dollar exchange rate was meanwhile seen half a percent higher at 1.2630.

Gains came against all major G10's leaving Sterling the best performing major currency of the day. 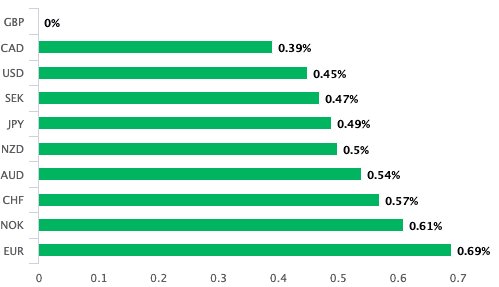 However, flip the timeline to look at 2020 as a whole and it is clear Sterling remains under notable pressure as the currency is in fact the worst performer of the year, with much of the losses coming in the April-June period and we are still of the belief that rallies will be shallow and limited in duration.

The UK's economic recovery from the covid-19 crisis appears to be lagging that of other countries, which could create another source of weakness for an already under-pressure British Pound say analysts.

"From an FX perspective it is always about the relative and we would argue that the relative macro position for the UK is looking grimmer than most other major economies that will lead to further GBP weakness ahead," says Derek Halpenny, Head of Research, Global Markets, at MUFG.

The Pound will continue to be driven by broader financial market sentiment, Bank of England policy, Brexit trade negotiations and economic data that gives an insight into how fast the economy is emerging from the covid-19 crisis relative to their peers.

With concerns growing about a lagging UK recovery, this week could see markets opt to pay more attention to Friday's release of retail sales than would normally be the case as the UK economy is highly dependent on consumer spending, and the data should give a good steer as to how the recovery is evolving.

The market is expecting retail sales to have increased by 8.5% in June, a beat or miss on this number could provide some near-term volatility in the currency. But Friday will in fact prove to be a crucial day for Sterling from an economic data perspective as it also sees the release of PMI data that will give first taste of how July's economic activity has progressed; crucially the numbers should cover the period that saw the restaurant, pub and hospitality sector reopen.

"With the reopening of large parts of the hospitality sector in July, that month’s flash PMIs should have received a boost. We expect readings of 53.0 and 52.0 for services and manufacturing respectively," says Martin Beck, Lead UK Economist at Oxford Economics. Should these expectations be met Sterling could find itself better supported, but a miss could only add to the negativity currently weighing on the currency's valuation.

Last week the ONS reported GDP data for May read at a paltry 1.8% m/m, well below the figure markets were looking for at 5.5% while the rolling three month GDP decline of 19.1% in May was worse than the consensus expectations which were set at a shallower -17.5%.

The data showed that while manufacturing activity was stronger the main driver of weakness was the dominant services sector - accounting for over 80% of UK economic activity - which advanced 0.9% m/m in May against a forecast for a 4.8% increase.

"The UK has the relative disadvantage that a larger share of its GDP comes from sectors like leisure that are restrained the most by social distancing," says Ruth Gregory, Senior UK Economist at Capital Economics.

MUFG note that high frequency data which gives an insight into how the economy is currently performing shows activity remains more subdued in the UK than elsewhere suggesting consumer spending could be slow to recover.

"Google mobility data points to improvements in ‘social life’ in Japan, the US and some European countries but the UK remains far behind," says Rune Thyge Johansen, Assistant Analyst at Danske Bank. 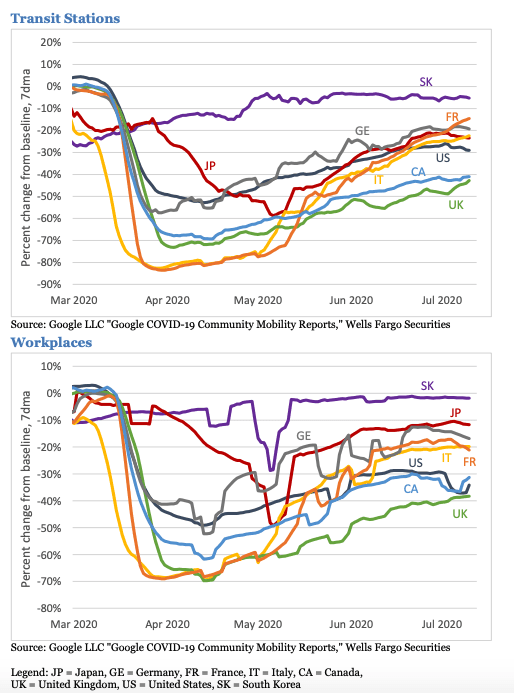 The UK economy is one that relies heavily on consumer spending and therefore such observations would suggest the services sector - and hence the economy - could lag its peers in recovering.

From a foreign exchange perspective the relative performance of two countries should offer a fundamental steer to how an exchange rate will move and a slow UK recovery relative to the Eurozone and U.S. would therefore likely imply Sterling weakness against the Euro and Dollar.

"The U.K. remains a laggard," says Jay H. Bryson, Chief Economist at Wells Fargo. "In particular, Google data for the U.K. have shown little sign of catch-up to other countries that lifted lockdowns earlier. Instead, it has been a steady and slow slog upward for the United Kingdom."

"Of course that in part reflects a lag given the UK went into lockdown later and came out later but by now the mobility of people suggests greater caution here that could mean the road to recovery is going to be longer," says MUFG's Halpenny.

A slow economic recovery feeds into a weaker Sterling outlook via the Bank of England which would be expected to introduce additional measures to support the economy, most likely via further quantitative easing.

"The reality is that the UK will require further monetary support going forward," says Halpenny. "With the Brexit impediment thrown in on top, GBP will increasingly be viewed as part of the solution in providing stimulus through further depreciation ahead."

Quantitative easing has been supressing the yield paid on government debt (gilts), with the 2-year yield going below that of Japan at one point last week. This provides very little incentive for foreigners to divert capital into the UK to seek returns, thus depriving Sterling of a pillar of support.