- UK economy only rebounds 1.8% in May
- 8% recovery in June forecast
- But recovery to disappoint until furlough scheme ends, schools reopen 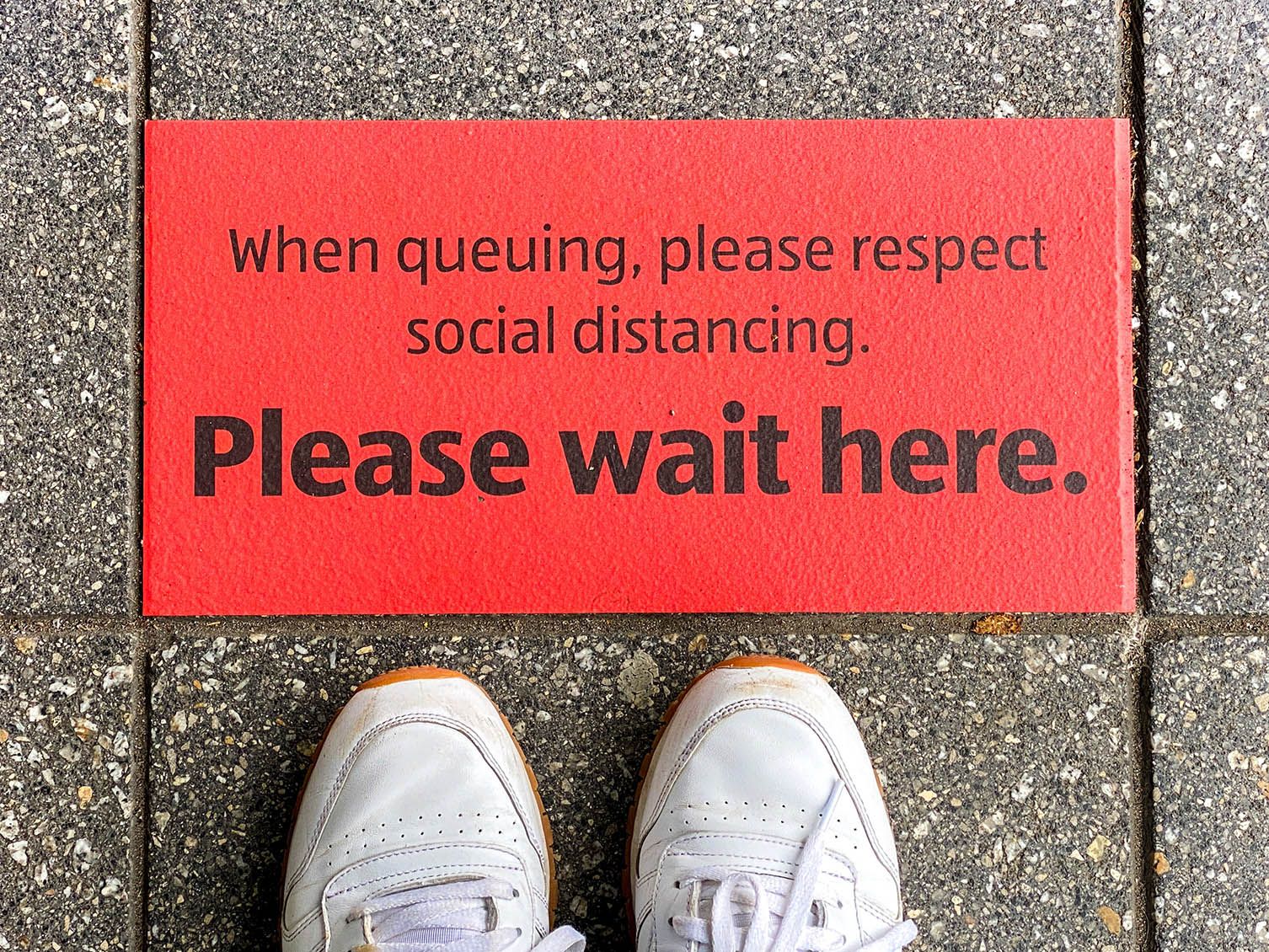 The data means the level of the country's GDP was still 24.5% below its level in February, before the full impact of the coronacrisis was felt and the nonchalant response by Pound Sterling suggests markets have largely discounted the data with traders more likely to be interested in survey data which gives a more timely view of the recovery.

"UK May GDP data (+1.8%) were very soft relative to expectations of a 5%-plus rebound after April's 20.4% collapse. Sterling has felt that softness though June BRC data were better, and May was, it feels now, a long time ago. EUR/GBP is back above 0.90, where I think it belongs," says Kit Juckes, Global Head of FX Strategy at Société Générale.

The economy has a daunting mountain to climb given that the 1.8% recovery in May is dwarfed by the fact GDP fell by 19.1% in the three months to May, as government restrictions on movement dramatically reduced economic activity says the ONS, with the most significant hit to the economy being the introduction of restrictions in movement across the UK on 23 March 2020.

"Manufacturing and house building showed signs of recovery as some businesses saw staff return to work. Despite this, the economy was still a quarter smaller in May than in February, before the full effects of the pandemic struck," says Jonathan Athow, Deputy National Statistician for Economic Statistics at the ONS. 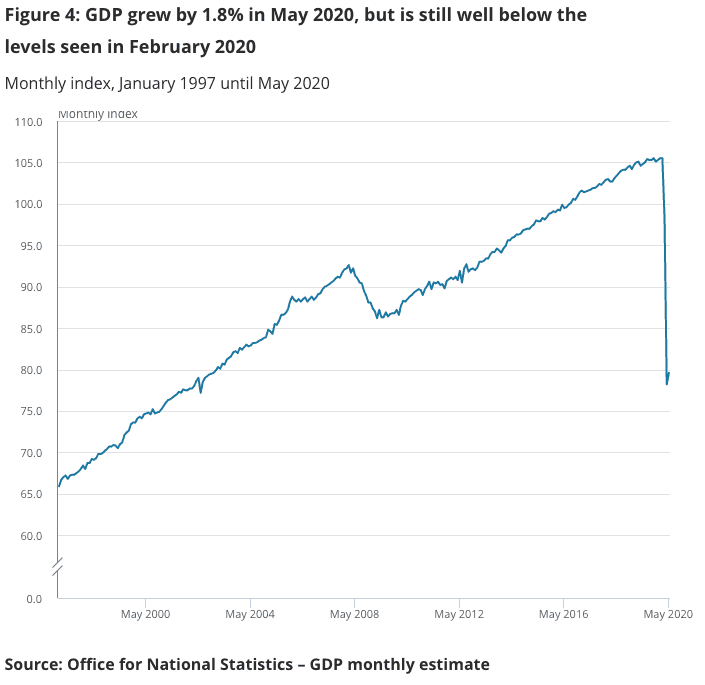 "In the important services sector, we saw some pickup in retail, which saw record online sales. However, with lockdown restrictions remaining in place, many other services remained in the doldrums, with a number of areas seeing further declines," added Athow.

The manufacturing sector saw 11 out of 13 sub-sectors increasing after large falls across March and April 2020. Despite growth in the latest month, production output is 19.1% lower than the pre COVID-19 level in February 2020, with manufacturing 22.3% lower.

Construction grew by 8.2% in May 2020, an increase driven by new housing, in particular private housing (14.2% weight to construction), which grew 21.4% after large declines in March and April. However the level of output remains 38.8% lower than February 2020, before the pandemic. 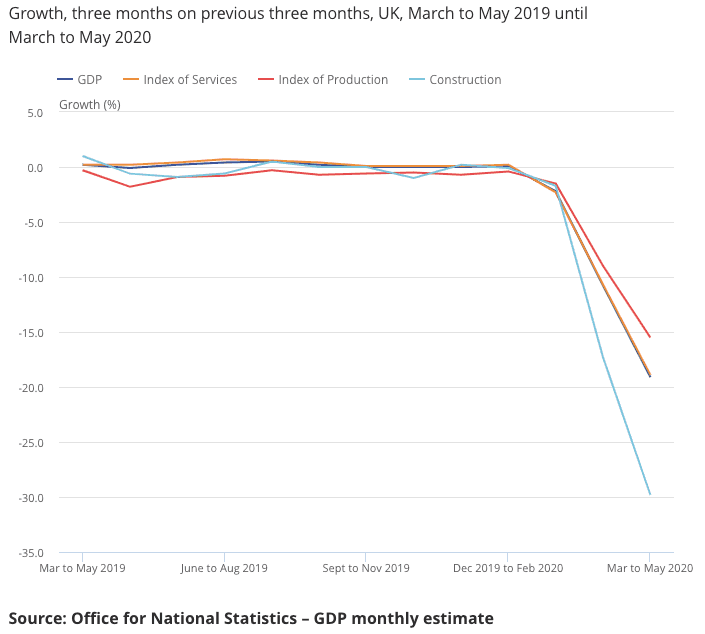 The largest contributors to this fall were private new housing and private commercial, which fell by 42.5% and 29.5% respectively.

"A variety of unconventional indicators, such as energy consumption, transport usage and mobility data, suggest that the recovery quickened in June. Nonetheless, the ONS’ latest Business Impact of Covid-19 survey showed that a hefty 34% of employees remained furloughed in the first half of June, down only a bit from the 38% peak in the second half of May," says Tombs.

The UK economic recovery will likely remain underwhelming as long as the furlough scheme continues - firms would rather have the government pay their wage bill than trade in subdued market conditions - and schools fully reopen.

"Output in the education sector, which was 46% below its peak in May, likely barely recovered in June, given that school pupil attendance rose merely to 11%, from 2% in May. It will not fully recover until schools reopen to all pupils in September," says Tombs.

Also hobbling the recovery is the cowed UK consumer which appears to be afraid of a return to normality for fear of being infected by covid-19. "With surveys showing that households remain very fearful of contracting the virus, social distancing rules likely to limit the consumption of services until the population is vaccinated and employers set to layoff many furloughed workers in the autumn, we think that GDP still will be about 5% below its pre-Covid level by the end of this year," says Tombs.

However, one economist says data due out over the next few months should be more convincing than today’s disappointing figures.

"The good news is that in terms of the monthly trajectory, there is clear evidence that the economy has remained on an upward path since May. Indeed the rebound in June and July should be more buoyant, given the re-opening of ‘non-essential’ retailing in mid-June. Indeed real-time data such as transport usage, retail footfall and electricity demand are consistent with a steeper rebound through the summer so far, as various aspects of the lockdown continue to be relaxed," says Philip Shaw, an economist at Investec. 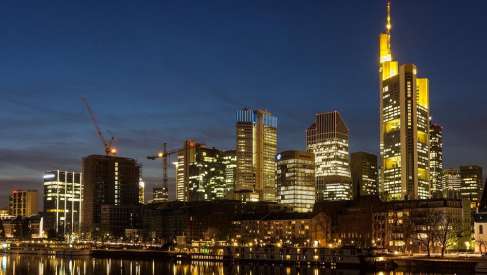