With London markets returning to trade on Tuesday, investors will be met by a British Pound that has shown some resilience against the likes of the Euro and Dollar in their absence. Gains for the UK currency come amidst a rally in global stock markets while investors are not prepared to read too deeply into the domestic intrigue surrounding the UK Prime Minister's advisor, as the real political event on the Sterling's radar remains Brexit trade negotiations.

Indeed, while Sterling has edged higher against a host of the world's major currencies, new analysis from UK high-street lender Lloyds Bank suggests there are some growing risks on the horizon in the form of Bank of England policy and a potential failure in trade negotiations.

"The GBP has experienced a rollercoaster ride," says Gajan Mahadevan, Strategist at Lloyds Bank, "Through March, as the COVID-19 crisis escalated into a global pandemic, GBP/USD experienced one of its largest fortnightly declines in history."

However, following the rapid response from global central banks and governments to the shock, it regained some poise by the end of the month and started to rally, notes Mahadevan. That rally has however since faded as currency markets shift focus once more, ensuring the Pound-to-Dollar exchange rate is left trading around the 1.22 area while the Pound-to-Euro exchange rate is trading between 1.11 and 1.12. 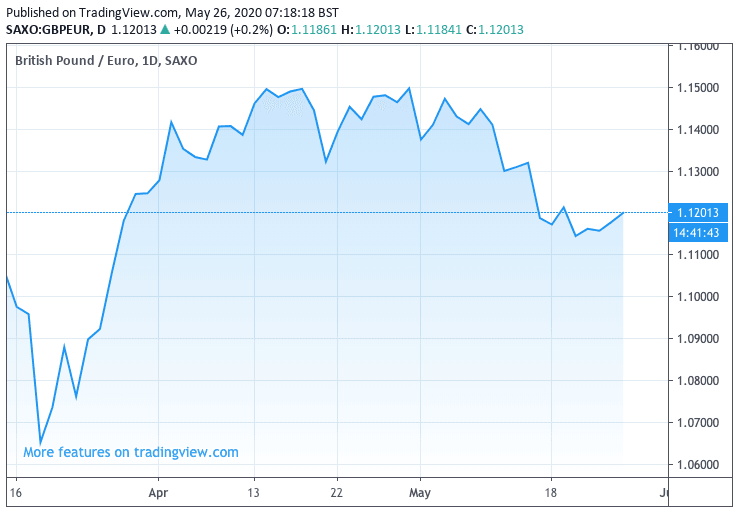 Above: GBP/EUR ticks higher over the course of the first two days of the week

Lloyds Bank analysis suggests that the broader market sentiment related to the covid-19 pandemic is now becoming less of a driver for Sterling, and this poses potential downside risks moving forward.

"With a sense of calm gradually returning to financial markets, evident in rising equity prices and falling volatility indices, the correlation between GBP/USD and our Cross-Asset Risk Index has fallen (from +0.85 to +0.61). While broader risk sentiment remains an important driver, this change suggests that investors’ focus maybe shifting elsewhere," says Mahadevan.

"Should the market’s attention continue to shift from the coronavirus to other sources of risk, the narratives relating to a negative Bank rate and ongoing challenges in trade negotiations between the UK and EU may present headwinds to GBP/USD," adds Mahadevan.

The Bank of England has over the course of May appeared to be increasingly introducing the idea of negative interest rates with various members of the Monetary Policy Committee saying cutting interest rates to below 0% was an option they were willing to consider in order to support the economy.

Market expectations for such a move have therefore grown, ensuring the Pound's upside potential has been capped. Typically, negative interest rates tend to be source of weakness for a currency, as foreign investors look elsewhere for investment returns. The UK has long been attractive to investors looking to invest in the country's gilt and money markets; however if the return on those assets falls to below zero that source of incoming capital would likely dry up, and even reverse.

This in turn places downside pressure on Sterling.

Appearing before parliamentarians on Wednesday, Bank of England Governor Andrew Bailey said negative interest rates are under active review, "we do not rule things out on principle".

He added the Monetary Policy Committee has a history of keeping under review the "lower bound", which is effectively the lowest level of interest rates they are prepared to cut interest rates to.

The comments from Bailey echo those made by the Bank's Chief Economist, Andy Haldane, who over the weekend said in an interview negative interest rates were a possible outcome of future policy decisions.

But once again, Sterling is the unintended victim: the falling yields on government debt driven by the Bank of England's actions makes that same debt less attractive to foreign investors. Without that steady foreign demand for government debt, the Pound loses a key pillar of support. 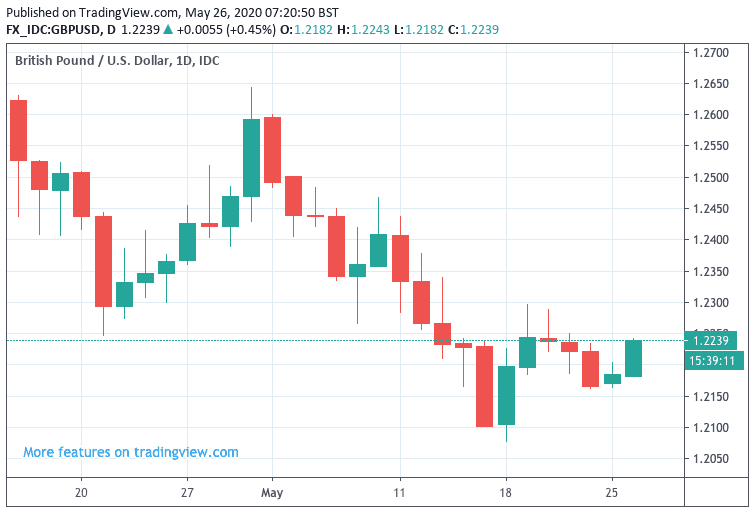 Above: GBP/USD rises 0.45% on Tuesday, May 26, however the gains come against a backdrop of declines for much of May.

It is therefore little wonder analysts see little chance of a major recovery in the Pound in the current circumstances.

But, Petr Krpata, Chief EMEA FX and IR Strategist at ING says investors might have already factored in the Bank of England's actions, as the market is now pricing an interest rates below zero by November this year.

"With the prospects of negative rates fully on the market’s radar and in part priced in by the end of this year and for 2021, the next main hurdle for GBP should be the negative news-flow on the trade negotiations and likely no extension of the UK-EU transition period," says Krpata.

Following the latest round of trade negotiation talks, the UK's chief negotiator David Frost said the EU were making "novel and unbalanced proposals on the so-called level playing field," adding that the list of demands were without precedent in previous EU trade deals. This combined with the EU Chief Negotiator's dour assessment on the state of negotiations have lead markets to raise expectations for a potential failure in talks.

A final round of negotiations are due in early June ahead of a mid-month European Council meeting where EU leaders will discuss and assess the progress made. The UK has until the end of June to request an extension to talks and the transition period, but as of yet there is no indication the UK would consider such a request.

Therefore, a series of important deadlines will emerge in June for Sterling. While it is too soon to completely write off the chances of a deal being struck, and it is therefore arguably too soon to press the sell button on the Pound, we would imagine that any upside potential will be severely curtailed.

Should negotiators strike a deal at some point in June then the Pound should rally, however any failure to reach a deal would likely result in more meaningful weakness.