The Euro to Dollar rate came within arm's reach of six-month highs after appearing to misread a keynote speech from Federal Reserve (Fed) Chairman Jerome Powell and ahead of yet more inflation data that will test the viability of the market's latest assumption about the outlook for U.S. interest rates.

Europe's single currency traded close to 1.05 against the Dollar during the European morning on Thursday, making for some of its strongest levels since June, after the greenback slumped alongside U.S. government bond yields in the wake of Wednesday's speech from Fed Chair Jerome Powell.

Federal Funds rate futures suggested that investors had revised down their expectation of the peak in U.S. interest rates to somewhere between 4.75% and 5% after Chairman Powell left the outlook for borrowing costs hinged heavily upon inflation developments and the performance of the labour market.

This is most notable because the above-referenced assumption about the peak or ultimate destination of U.S. interest rates will be tested as soon as Thursday when October's reading of the Fed's preferred measure of inflation, the Personal Consumption Expenditures (PCE) Price Index, is set for release.

"We currently estimate that 12-month personal consumption expenditures (PCE) inflation through October ran at 6.0 percent," Chairman Powell said in a speech at the Hutchins Center on Fiscal and Monetary Policy on Wednesday. 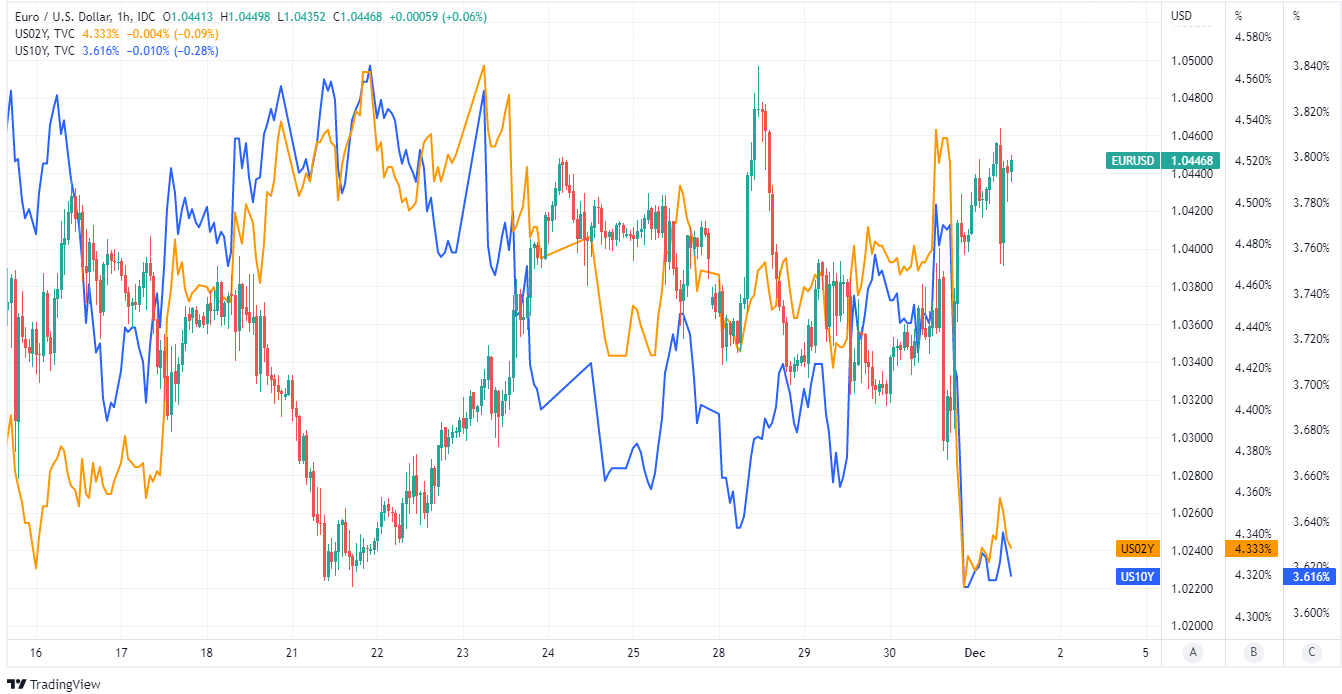 "Twelve-month core PCE inflation stands at 5.0 percent in our October estimate, approximately where it stood last December when policy tightening was in its early stages," he also said in discussion about inflation and the labour market.

With Chairman Powell and other policymakers having tied the outlook for U.S. interest rates to how quickly inflation comes down and however soon the economy and labour markets weaken by enough to ensure inflation returns to the 2% target, Thursday's PCE inflation data will be important than usual.

Even more so after U.S. government bond yields and Dollar exchange rates fell as widely as they did heavily in the wake of Wednesday's speech.

Wednesday's address contained no suggestion of the Fed being about to back away from its view that interest rates could ultimately have to rise further than suggested back in September's round of FOMC forecasts.

"It makes sense to moderate the pace of our rate increases as we approach the level of restraint that will be sufficient to bring inflation down. The time for moderating the pace of rate increases may come as soon as the December meeting," Chairman Powell said on Wednesday.

"Given our progress in tightening policy, the timing of that moderation is far less significant than the questions of how much further we will need to raise rates to control inflation, and the length of time it will be necessary to hold policy at a restrictive level," he added in concluding remarks. 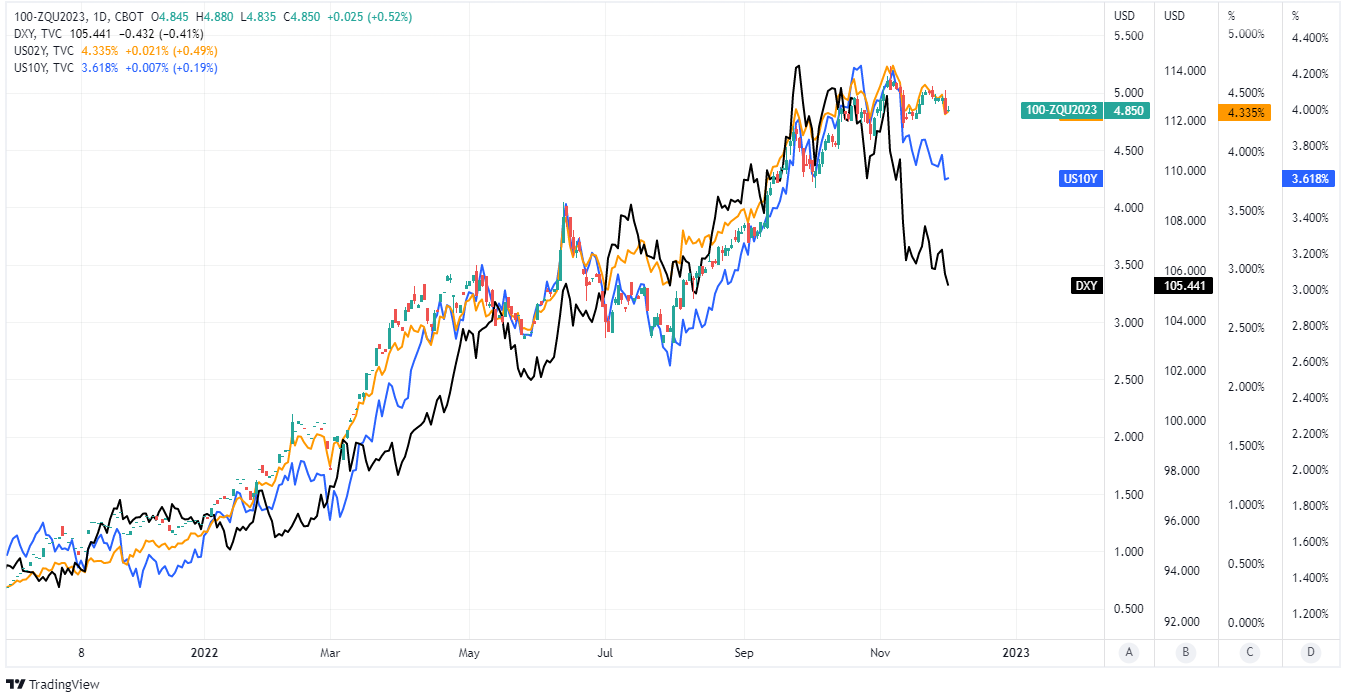 Above: Interest rate implied by September 2023 Federal Funds rate future shown alongside Dollar Index as well as 02-year and 10-year U.S. bond yields. Click image for closer inspection. If you are looking to protect or boost your international payment budget you could consider securing today's rate for use in the future, or set an order for your ideal rate when it is achieved, more information can be found here.

Chairman Powell cited policymakers' reluctance to "overtighten" as being behind a possible December decision to lift interest rates in smaller increments than those used most recently but he also made clear that upside risks to market assumptions about the eventual peak or destination for interest rates remain.

"We wouldn't just raise rates and try to crash the economy and then clean up afterward. I wouldn't take that approach at all. I think we're in a position where the right thing to do is to raise rates really quickly, and that we have, and to now slowdown to get to that place where we think we need to be," he said.

"And by the way, there's high uncertainty around that. We have a broad set of thoughts about where that destination might be but we could be wrong. It could be higher than that. It could be lower than that. We'll just have to see but I think that's the right approach," he told the Hutchins Center's David Wessel.

The Euro had benefited to the detriment of the Dollar in early November when official data suggested that U.S. inflation had ebbed previously in October but Chairman Powell was frank on Wednesday in saying that "it will take substantially more evidence to give comfort that inflation is actually declining."

That's another reason why Thursday's PCE inflation data could be important for how the Euro, Dollar and other currencies finish up the week. 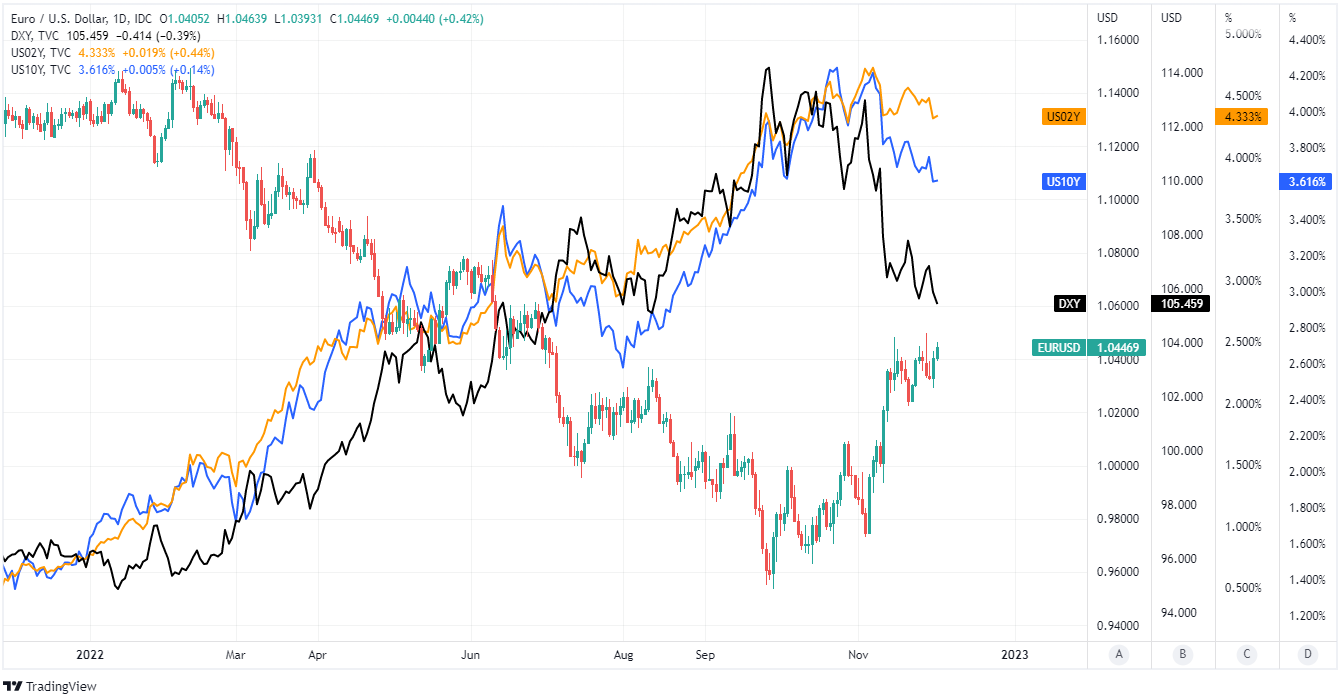 Above: Euro to Dollar rate shown daily intervals alongside Dollar Index as well as 02-year and 10-year U.S. government bond yields. To optimise the timing of international payments you could consider setting a free FX rate alert here.