The U.S. Dollar rose back to its feet during the final session of the week but was walking wounded after sustaining heavy losses against all major counterparts and some analysts have warned that its downward correction could extend further over the coming weeks and months.

U.S. exchange rates were steadier Friday but still carried their largest weekly declines since September after remarks from Federal Reserve (Fed) Chairman Jerome Powell were followed on Wednesday by a wave of selling that many perceived as profit-taking by speculative traders.

“Adjectives such as painful/nasty/nonsensical all seem fitting, however in hindsight, an over-exposed USD long has been taken to the mill,” says Jonathan Pierce, a trader at Credit Suisse.

“We have moved to the sidelines in EUR and JPY, whilst we still see value tactically re-buying this USDCHF dip whilst above 0.9085,” Pierce and colleagues said in a Thursday market commentary

Recent losses have been large but some are warning they could extend further in the short-term now that market pricing has come to fully recognise the likelihood that Federal Reserve interest rates may be raised between three and four times this year.

The Dollar had rallied for six months previously as market participants built up their largest bet on the currency since the onset of the coronavirus crisis, although it came under pressure this week after Chairman Powell appeared to endorse market expectations for the Fed’s interest rate. 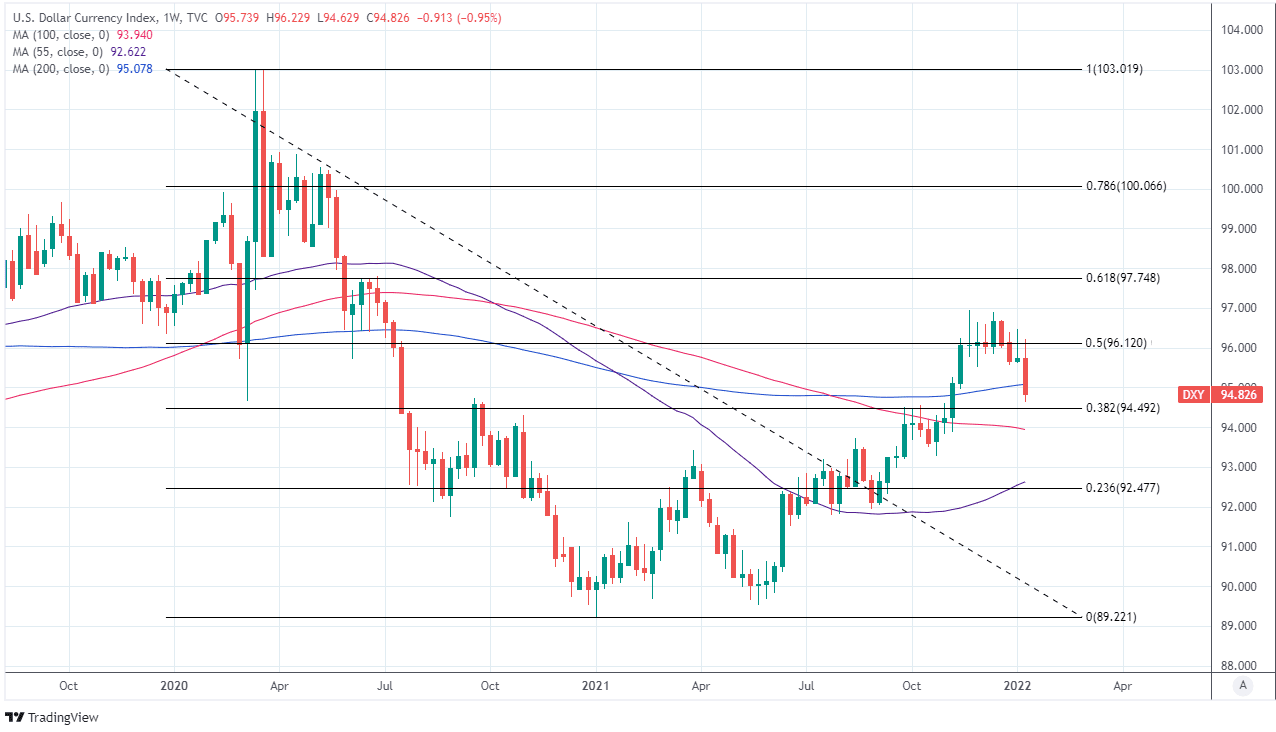 “There are several factors that may weigh on it further in the near term. But we think that the Fed’s increasingly rapid shift towards a tighter policy stance will eventually push the greenback higher against most other currencies this year,” says Jonas Goltermann, a senior economist in the global markets team at Capital Economics. “We see two reasons to think the dollar will resume its rally.”

While some have warned that additional profit-taking could potentially keep the Dollar on its back foot for a while yet, many analysts and economists do still expect the greenback to advance further against other major currencies for the 2022 year overall.

Goltermann and colleagues said Thursday that central banks outside the U.S. are unlikely to meet lofty market expectations for their own interest rates, meaning there’s a risk of a disappointment for their currencies that could potentially be supportive of the Dollar over the coming months.

But they also judge that investors’ assumptions about the future peak for U.S. interest rates are likely too low, citing market pricing that suggested this week that the Fed Funds interest rate would be likely to top out around 1.75% by the early months of 2024.

Capital Economics told clients that U.S. borrowing costs are likely to rise further than this and sooner than investors give credit for, making a marketwide recognition of this a potential catalyst for the next leg higher in Dollar exchange rates later this year.

“Extended positioning has probably made the dollar vulnerable early this year and it has weakened on any hints of softer inflation - e.g. yesterday's US December PPI reading,” says Chris Turner, head of global markets and regional head of research for UK & CEE at ING.

“DXY [Dollar Index] broke below strong support earlier this week (resistance now 95.15/20) and looks as though it can fall another 0.5% to the 94.10 area. But we would view this move as corrective and expect the dollar to start finding support ahead of the Jan 26th FOMC meeting,” Turner also said.

While future upgrades to expectations for the Fed’s interest rate could yet lift the U.S. currency anew late in 2022, Dollar bulls may be vulnerable in the interim to any signs of a rollover in inflation, given that statistical base effects are set to weigh on the annual rate through much of this year.

Meanwhile, the Dollar would also be vulnerable over the coming weeks if the upcoming policy decisions from the Bank of Japan and European Central Bank confirm that inflation pressures are also beginning to make policymakers in Tokyo and Europe uneasy.

This is after Reuters reported on Friday that BoJ policymakers are likely to discuss at this month’s meeting when would be the most appropriate time to begin lifting interest rates and how to go about communicating this due to recent increases in Japanese inflation. 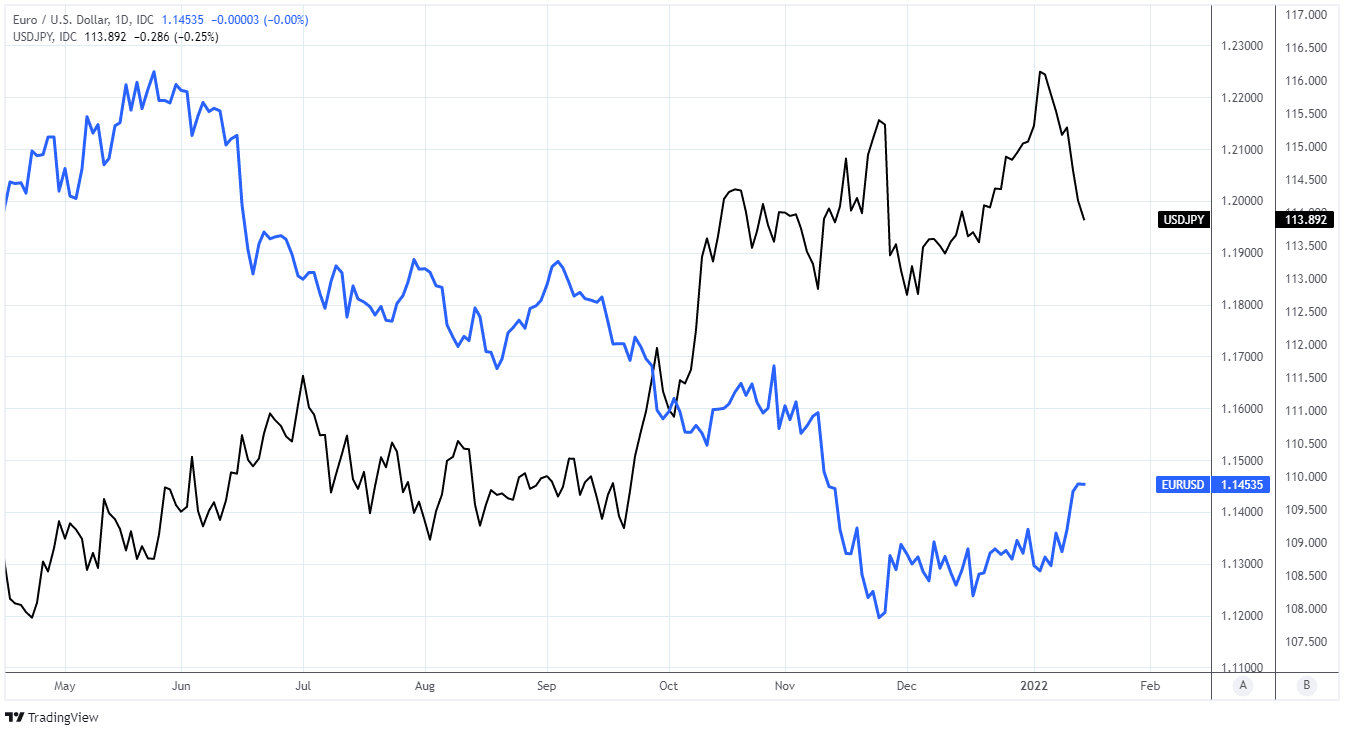 Above: Euro to Dollar rate shown at daily intervals alongside USD/JPY.

“Like nearly every country on the planet, Japan is seeing inflationary pressures, but you have to look harder for it in Japan and the data still suggests a different inflation picture. There is a BoJ policy meeting next week and we would be very surprised to hear Governor Kuroda giving this story much credence at all,” says Derek Halpenny, head of research, global markets EMEA and international securities at MUFG.

In addition and over in Europe the ECB’s Vice President Luis de Guindos said at a conference hosted by UBS on Thursday that continental inflation pressures are likely to surprise on the upside of Frankfurt’s forecasts this year.

“Inflation is expected to fall in the course of 2022, stabilise at levels above the pre-crisis level towards the end of the year and rise again from 2023 due to loose monetary policy. However, inflation is likely to decline more slowly in the course of this year than we had forecast when we presented our Annual Outlook at the end of November,” says Dr Jorg Kramer, chief economist at Commerzbank.

Vice President de Guindos was just the latest in a growing line of board members and market participants to express the concern that the ECB may have been premature in December when it said inflation has likely already peaked and that it could fall back below the bank’s 2% target next year.

Few analysts ithe market see either of the BoJ or ECB as being likely to shift their stances on interest rates any time soon and although their thinking could ultimately be proven right, this scepticism would enhance the impact on the market in the event that either does begin to signal a move.

“The ECB seems more relaxed about the situation and is trying to look through the current elevated inflation, signaling no rate hikes for at least another 18 months,” says Thomas Flury, a chief investment office strategist at UBS Global Wealth Management.

“We do not yet forecast a rebound of EURUSD, even though fair value calculations suggest that the EUR should eventually strengthen and historical observations show that the USD has often reached a top shortly after the US rate hike cycle has started,” Flury and colleagues said on Friday.