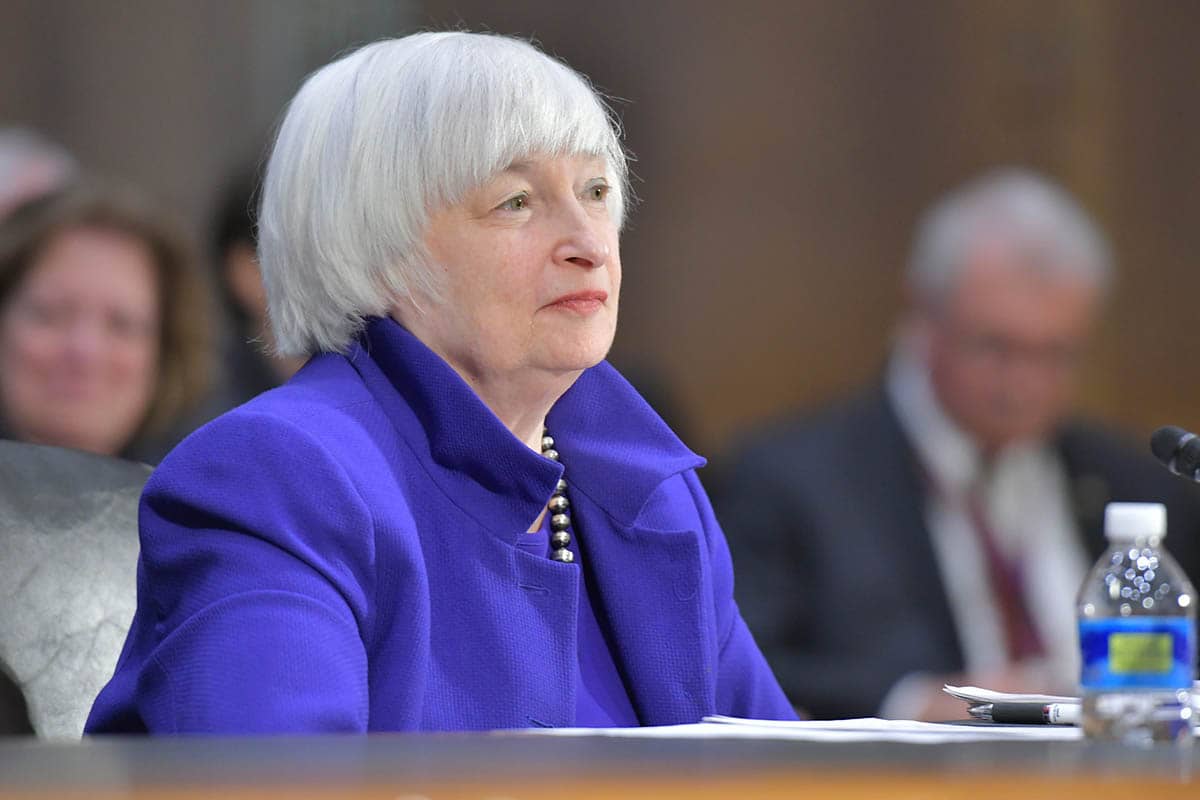 Above: File image of Janet Yellen. Image courtesy of the Federal Reserve.

The Dollar rose and stocks fell after U.S. Treasury Secretary Janet Yellen said some "very modest" increases in interest rates at the Federal Reserve might be needed in the foreseeable future.

"It may be that interest rates will have to rise somewhat to make sure that our economy doesn’t overheat, even though the additional spending is relatively small relative to the size of the economy," she said.

"Janet Yellen’s view on interest rates is common sense: if the economy is surging too quickly and raising the risk of inflation, it is likely the Fed would act by hiking rates. This should not be the main news, but in the current scenario it was enough to trigger a quick sell off on stocks and gold as well," says Carlo Alberto De Casa, Chief analyst, ActivTrades.

The U.S. Fed in the final week of April made it clear it was not considering raising interest rates until such a time as the U.S. labour market had improved substantially.

Yellen's intervention therefore casts some doubt on the Fed's guidance, creating the necessary uncertainty for investors to sell stocks and buy the Dollar.

"In FX, US Treasury Secretary Janet Yellen stating that interest rates in the US may have to rise to prevent the US economy from overheating triggered some short covering in the USD’s favour, amid a general risk-off tone across markets," says Roberto Mialich, FX Strategist at UniCredit Bank in Milan.

The Euro-to-Dollar exchange rate fell back by 0.42% on Tuesday and mid-week trade sees the pair holding fort just above the 1.20 level.

"However, the 10Y UST yield falling back below 1.60% has probably prevented a more intense USD buying," says Mialich.

Yellen did appear to row back on her commentary later on Tuesday, saying in a separate event that she is not looking to pressure the Fed.

"It’s not something I’m predicting or recommending," Yellen said during an online event hosted by the Wall Street Journal. "If anyone appreciates the independence of the Federal Reserve, I think that person is me."

"EUR-USD thus managed to hold the line above 1.20 in spite of the 10Y Bund yield also retreating towards -0.25%," says Mialich.

The April Bank of America Global Fund Manager Survey showed the the 'bearish Dollar' thesis to be losing support, with only net 17% of respondents seeing the dollar as ‘overvalued’, which is the lowest level since August 2018, and down from over 50% last year.

The view on the Euro balanced with the same proportion viewing the single currency as overvalued as those who think it is undervalued at net 0%.

"In other words, whichever way the markets move, there will be a lot of surprised investors! In a market like this, with building macroeconomic risks and a lack of FX market consensus, it is more important than ever to carefully monitor and, where appropriate, hedge the FX risk exposure in your portfolio," says Kevin Lester, CEO of Validus Risk Management.