The Euro-to-Dollar exchange rate (EUR/USD) could be on a course that takes it to below 1.20 on a sustained basis, if the European Central Bank's penchant for creating fresh money is anything to go by.

Analysis from Scandinavian lender and investment bank Nordea shows that while the U.S. Federal Reserve's balance sheet exploded earlier in 2020 it has since stabilised, meanwhile the European Central Bank's (ECB) balance sheet continues to grow.

The ECB published research in October 2020 confirming that quantitative easing has notable impacts on exchange rates.

"The results suggest that QE has large and persistent effects on the USD/EUR exchange rate, mainly through shifts in exchange rate risk and short-term interest rates between the two currencies," says Luca Dedola et al, in a special ECB research bulletin published October 20, 2020.

Based on the ECB’s approach and estimates adopted in the research, analysts at Nordea Markets have calculated a QE-derived fair value for the EUR/USD exchange rate which could give clues into the current move lower in EUR/USD, and importantly, where it is headed.

"In relative terms, the size of the Fed’s balance sheet peaked in June, and since then the ECB has printed new EUR’s at an even more dizzying pace than the Fed," says Andreas Steno Larsen, Chief Global FX/FI Strategist at Nordea Markets.

The below chart shows how the Fed's balance sheet expansion has eased while the ECB's has continued to grow: 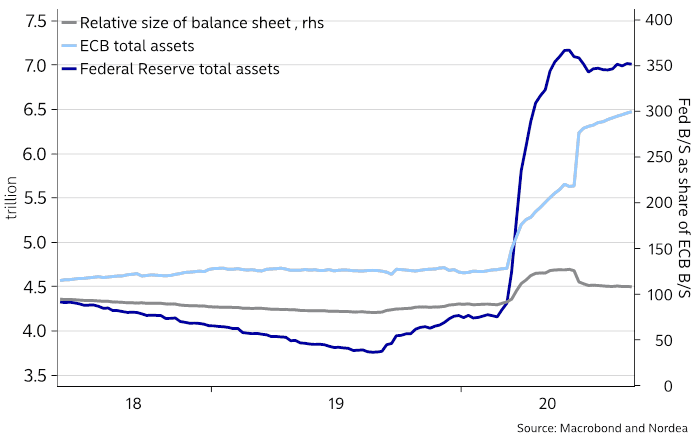 Above: The ECB has out-printed the Fed since summer says Nordea Markets.

The pickup in the pace of money creation at the ECB relative to the Fed over recent months could in turn provide insights into how the EUR/USD exchange rate might evolve.

"We calculate the current “QE fair value” of the EUR/USD to have dropped from the summer of 2020 when it peaked above 1.25 to currently reside in the 1.17 area," says Larsen. (For the latest investment bank consensus forecasts all in one place, Global Reach have released a comprehensive download, here).

The Euro-Dollar rate peaked at 1.2349 on January 06, but has since reversed lower to 1.2030 at the time of writing, threatening a major technical break lower in the process.

The analyst says these estimates should be "taken with a chunk of salt", but they nevertheless offer a new angle into the recent decline in the value of the Euro relative to the Dollar.

"If we combine them with the potential for an earlier-than-expected Fed taper – maybe EUR/USD will turn south sooner than currently anticipated," says Larsen. 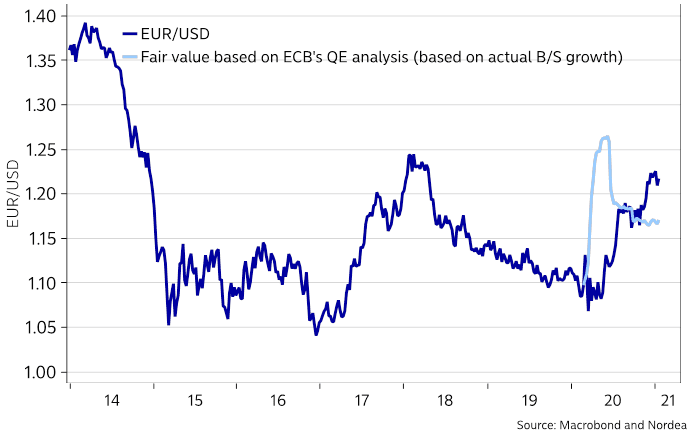 Above: 'QE fair value' of the EUR/USD has been dropping since June. Image courtesy of Nordea Markets.

But, Nordea Markets see the potential for Dollar outperformance of the Euro coming not just from relative monetary policy settings, but from differences in economic performance too.

"The US is going to outperform the Euro area in a 2018 kind of way during the next six months and remember that this was exactly what caused EUR/USD to turn south during the early parts of 2018," says Larsen.