Ebbing momentum at multi-year highs and a leap higher in long-term American bond yields were first to encourage a pause for thought in the market for Europe's single currency last week, although other fundamental headwinds have since appeared on the radar of traders.

The Euro has been a popular vehicles for expressions of bearish views on a U.S. Dollar that has steadied over the last week amid the increase in yields, which has been further encouraged by Federal Reserve (Fed) policymakers' views on the outlook for the bank's bond purchase programme.

Differing and sometimes divergent views among Federal Open Market Committee members have highlighted as well as emphasised that while the outlook for American interest rates may well be fixed for at least the next couple of years, the bank's bond buying programme could come up for debate sooner than many had anticipated.

"Italian political unrest and a sense that Europe is behind other major economies in vaccine deployment could, in the short term, keep up pressure for EUR/USD to break below 1.2120 and slip back to 1.20," says Kit Juckes, chief FX strategist at Societe Generale. "That would support the bullish dollar crowd but I'd be more interested in shorting euros against other currencies. EUR/AUD has clearly broken lower, EUR/GBP is still higher than I think it should be, however mediocre the trade deal was." 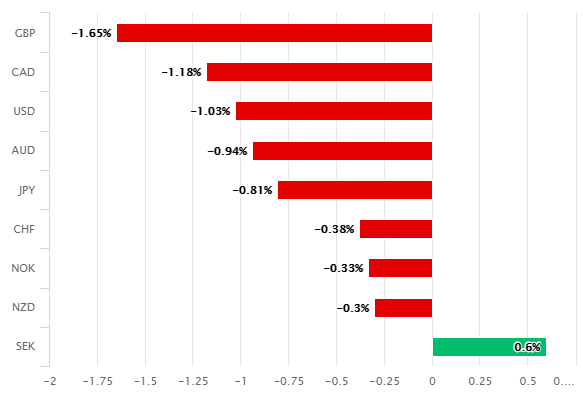 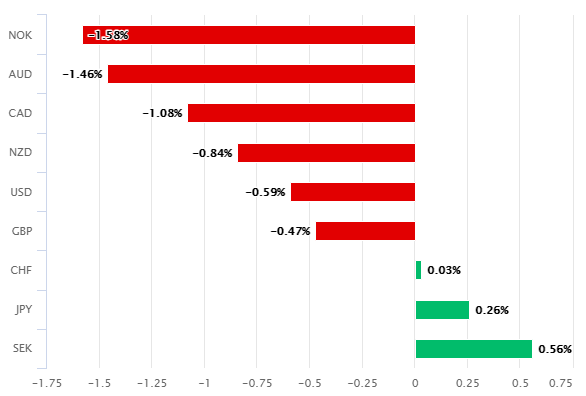 Above: Euro performance against major currencies on Thursday (left) and for 2021 (right).

The Euro was close to the bottom of the major currency league table for the week on Thursday, behind only the more volatile Swedish Krona, after lagging other counterparts in a tepid riposte to a recently resurgent Dollar that had prompted a bout of profit-taking in the week to Wednesday.

Analysts and traders are citing unease over the political situation in Italy, where a largely unenelected coalition government has splintered amid a row that at least purports to suggest an election could be likely.

A general election is considered by analysts to be a low probability scenario in part because it would open the doors of government to eurosceptic parties, although the row is troubling the Italian bond market and this is recipe for Euro weakness which has withstood the test of time. 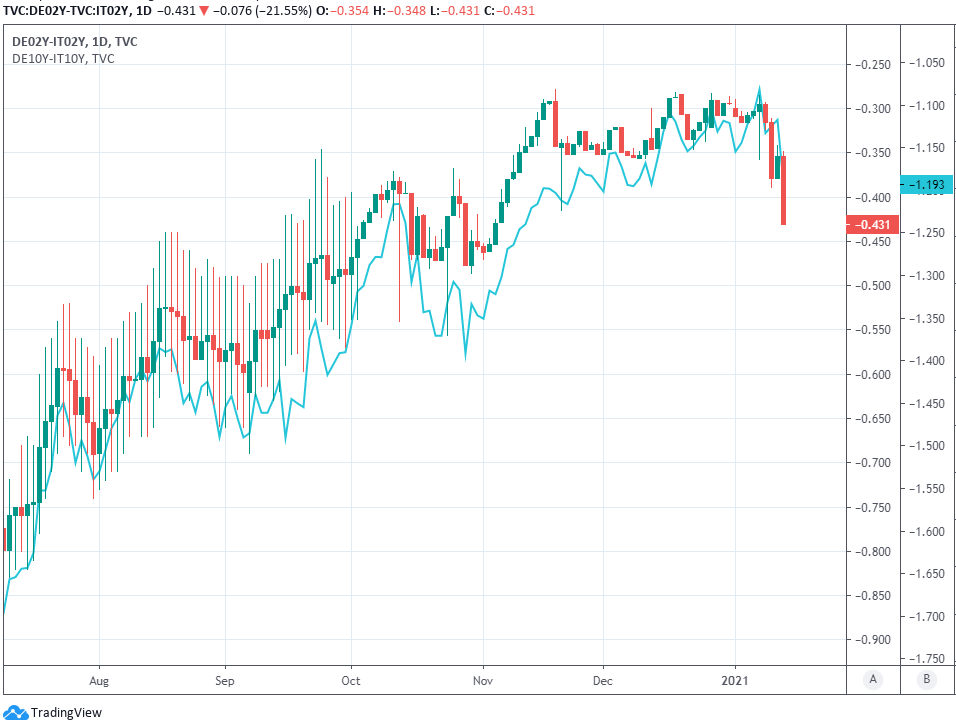 Above: Spread between German and Italian bond yields. 02-year alongside 10-year (blue) spread.

Political conflict in Rome centres on whether and how to make use of the European Union's coronavirus recovery fund - which imposes unpopular conditionality on those who use it.

It's potentially an ongoing threat to appetite for Italian bonds and upside risks for yields that have so-far been squashed by European Central Bank (ECB) quantitative easing.

"We have seen fairly consistent interest from macros and systematics to sell EURUSD and EUR crosses since the start of the year and based on the price action it feels like we may test down to 1.20. A huge amount rides on todays major risk events with Powell and Biden expected," says Michael Bilbe, a trader at Deutsche Bank. "Flow and overall domestic sentiment have pushed me to a neutral to marginally bearish EURUSD bias. I do not subscribe to a full USD reversal unless the US [bond] moves gain further traction in the front end 22/23 area, but I do think that from here EURUSD is more likely to test down to 1.20 vs going back to the YTD highs." 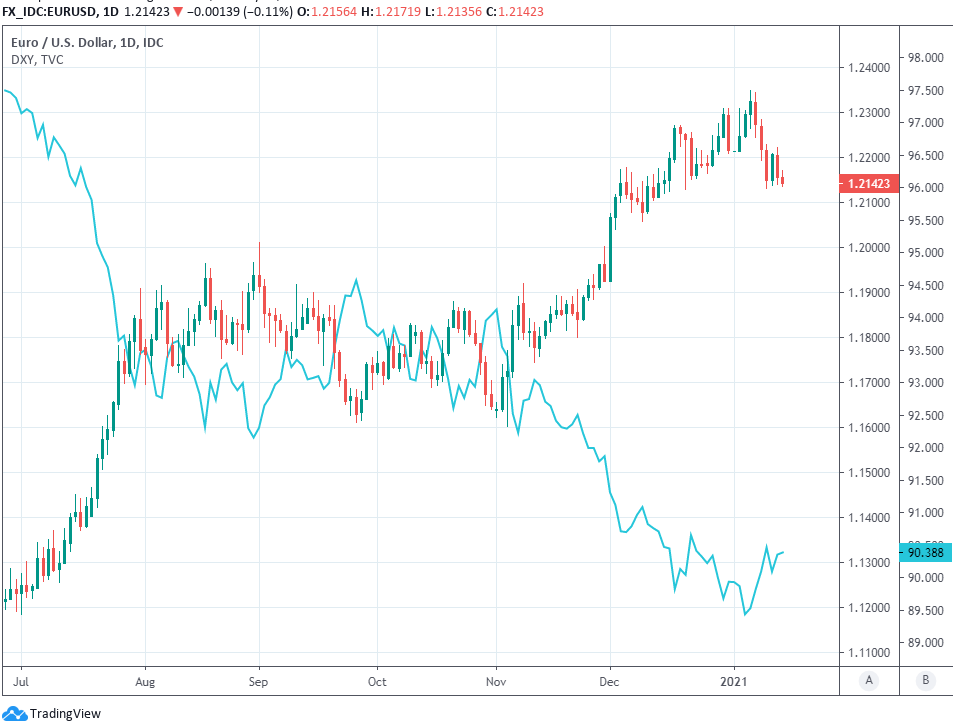 With the U.S. Dollar aside the best performing currencies thus far in 2021 have been those of countries which are making the most progress in having population inoculated against the coronavirus, with Israel and its sheckle having led the board thus far while many European countries lag behind.

The United Arab Emirates (UAE), Bahrain, the U.S., Denmark and Britain follow closely behind Israel and accordingly,. the U.S. Dollar and Pound are the two best performing major economy currencies of 2021. Meanwhile, the UAE Dirham and Danish Krone are 'pegged' to the Dollar and Euro respectively and so are not free-floating currencies.

"I fear the focus will remain on the dollar for now," says Antje Praefcke, an analyst at Commerzbank. "There is (1) the current debate that the Fed might begin tapering in the foreseeable future (which has even caused some Fed members to comment on the issue so as to dampen expectations) and (2) the assumption that the new President Joe Biden might find it easier to implement a far-reaching fiscal programme due to the political constellation in Congress, and that this might provide additional momentum for the US economy (Biden will announce details on his fiscal plans tonight)." 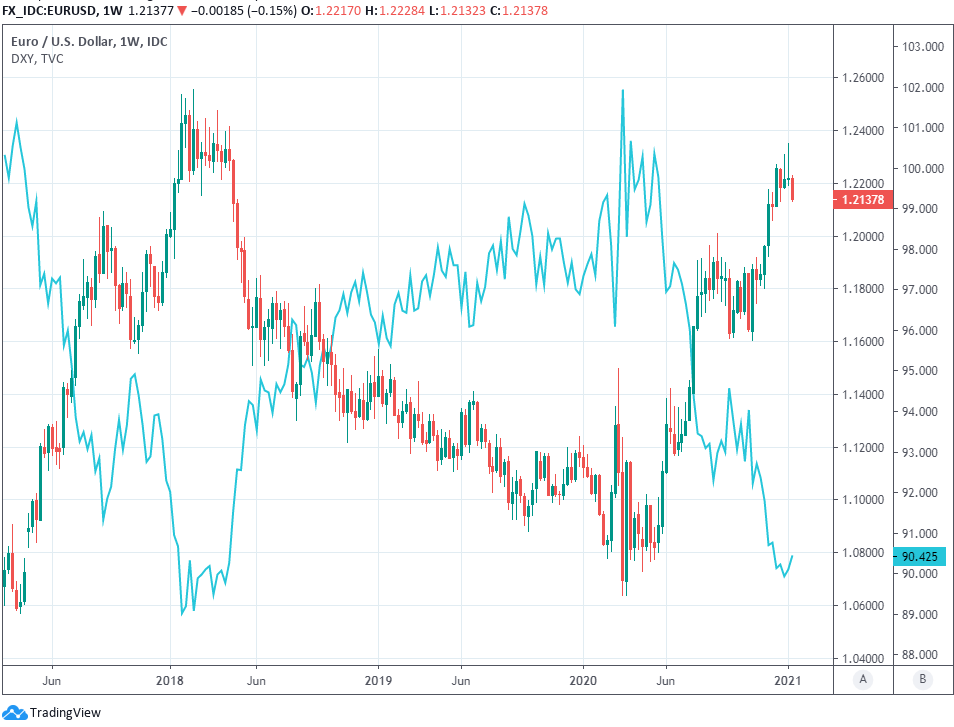 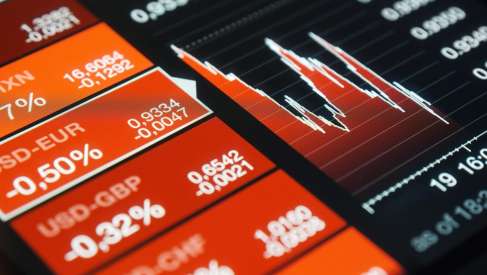