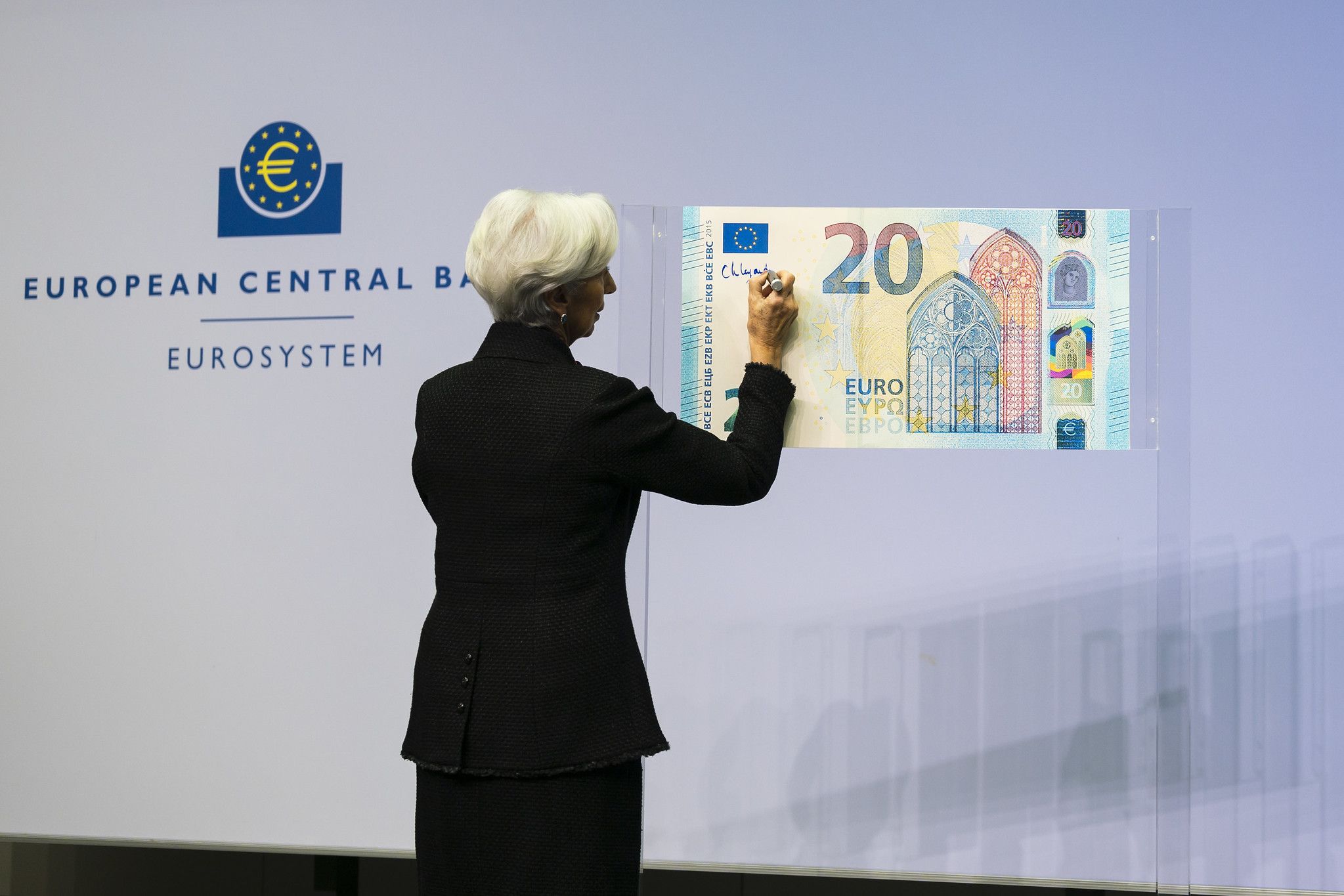 The European Central Bank (ECB) will today make decisions on Eurozone interest rates and quantitative easing settings, but they will almost certainly be asked questions about the strengthening Euro.

What makes the December ECB meeting different from the other meetings already held in 2020 is that it comes at a time of renewed Euro strength, which threatens to act as a deflationary force in the Eurozone economy.

The Euro-to-Dollar exchange rate has breached the 1.20 level this month and is looking bullish with numerous analysts saying the pair will remain locked above 1.20 for the foreseeable future.

Markets will be looking for signals from ECB President Christine Lagarde and her team as to what they make of the Euro exchange rate's appreciation, and crucially whether they can do anything about it.

In September the ECB's Chief Economist Philip Lane drew a line in the sand when he expressed discomfort with the Euro-Dollar exchange rate's rally to 1.20. The pair subsequently fell as the Dollar found its feet once more, but numerous other senior ECB officials have since expressed concern with the currency's appreciation.

"With expectations running high, it will be very difficult for the ECB to reverse the EUR/USD uptrend. The weak dollar dynamics are too powerful and despite more ECB easing expected this week, EUR/USD should head higher next year. We target EUR/USD 1.25 in 2021, with a strong upside risk to 1.30," says Petr Krpata, an analyst at ING Bank N.V. in London.

ING are expecting the Euro-to-Dollar exchange rate to trend around 1.21 following the December policy meeting: 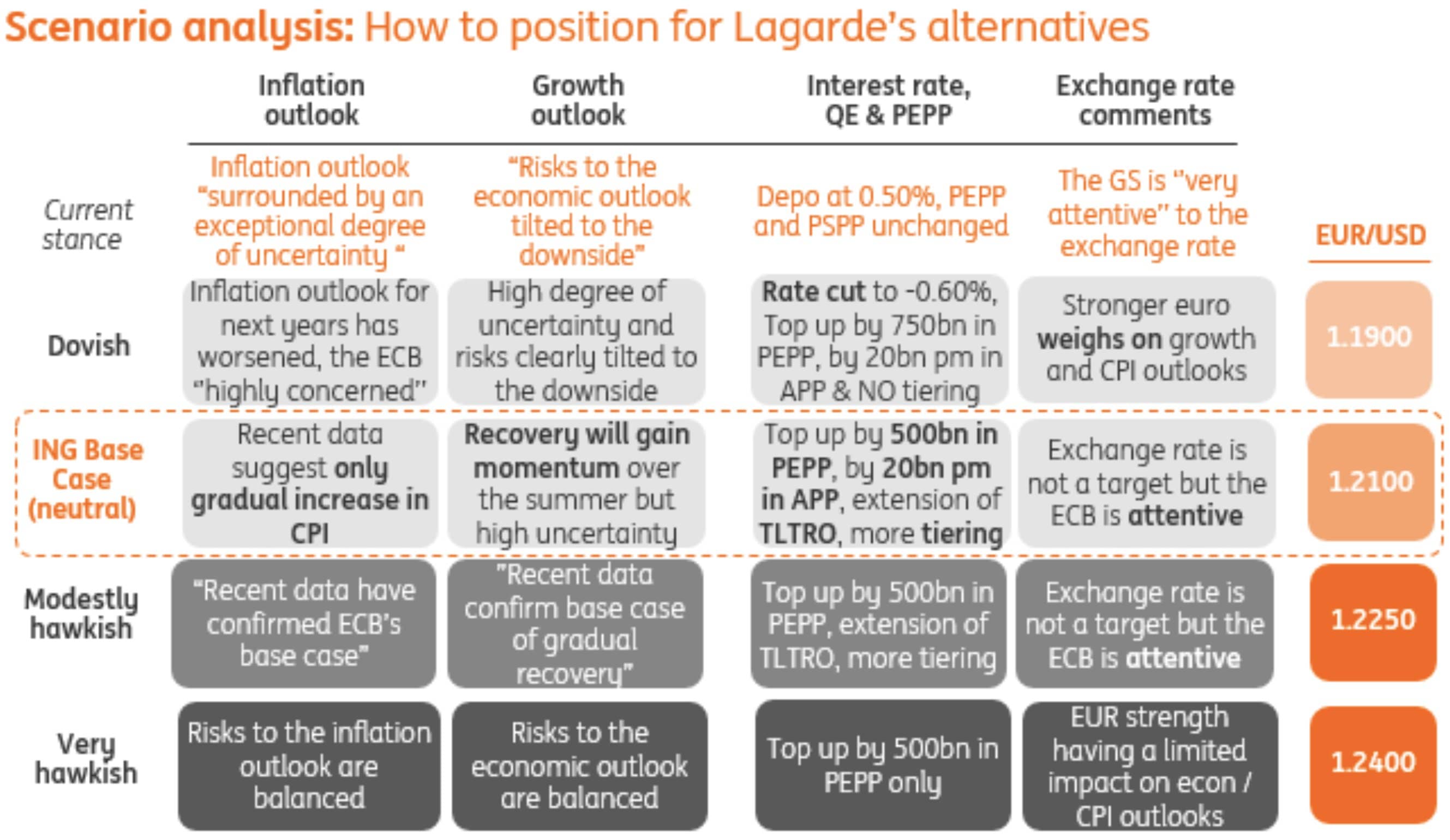 In addition, a rising Euro raises the Eurozone's purchasing power on foreign markets, thereby acting as a deflationary force.

"The ECB will also struggle to address the euro’s trend appreciation. Its disinflationary implications are unwelcome, but the rise in the currency is beyond the central bank’s control," says Brian Martin, Senior International Economist at ANZ Bank. 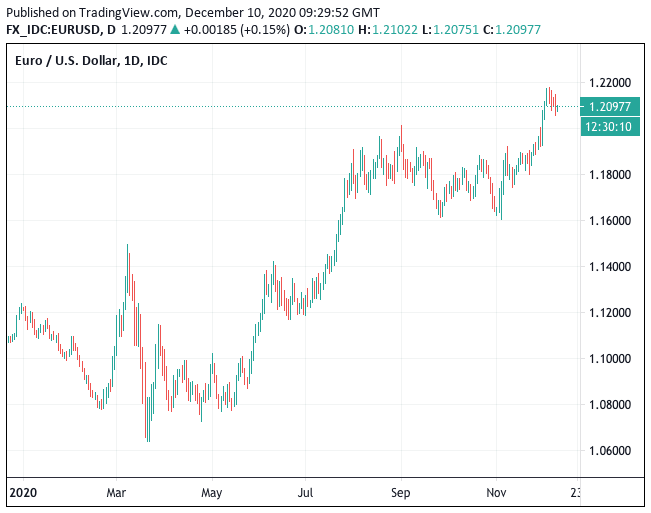 Economists at HSBC say the Euro exchange rate's rally appears to be a reflection of broader risk appetite and a weaker U.S. Dollar, as opposed to pure bullishness about the Eurozone’s prospects.

"The ECB may find it hard to stem the move right now. Of course, it may be that anything the central bank does is aimed less at reversing the move in the EUR but potentially slowing or limiting the move higher. However, if it cannot exceed easing expectations, the ECB risks being perceived as giving the green light to EUR strength," says Bunning.

Most economists are of the opinion that the ECB will keep interest rate settings unchanged but that the quantitative easing programme will be expanded.

The market is looking for €500BN more in bond purchases to be added to the overall quantitative easing package, with the programme extended into 2022.

It will therefore take a move beyond these expectations to dent the Euro.

A verbal assault on the Euro cannot be discounted, with Lagarde likely to mention the currency's strength in both the statement and the post-decision press conference.

But what will become abundantly clear is that 'jawboning' the currency will prove futile in the absence of aggressive action.

However, given the limits of the ECB's tools, and the downward pressures on the Dollar, any knee-jerk reactions lower in the Euro will likely fade.

ING's Krpata says the ECB will find it difficult to "over-deliver".

Economists at ING say the ECB will likely increase the Pandemic Emergency Purchase Programme by up to €500BN, increase of the monthly Asset Purchase Programme purchases from €20BN to €40BN (open-ended), and announce an extension of Targeted Longer Term Refinancing Operations.

An increase in the tiering facility and potentially including "Fallen Angels" into the corporate bond purchasing programme is also possible.

But this Krpata says this won’t be enough to push EUR/USD persistently lower and outweigh the very strong bearish USD dynamics, which is the key driving factor behind his bullish EUR/USD forecast.

ANZ meanwhile forecast the EUR/USD exchange rate will rise towards 1.30 medium-term with a year-end forecast of 1.28.