- EUR/USD rallies within confines of a descending channel

- At top of channel with risk of upside breakout

- Euro to be driven by PMIs; Dollar by manufacturing data

Our week ahead forecast for the Euro-Dollar exchange rate suggests the near-term outlook is constructive from a technical perspective, however movement in the currency pair could well be dictated by overall global investor appetite and a series of important economic data releases out of the Eurozone.

The technical outlook for EUR/USD is at a pivotal moment: the pair has now rallied up and touched the upper borderline of a descending channel. The big question now is will it break out higher or conform to the channel and recapitulate? 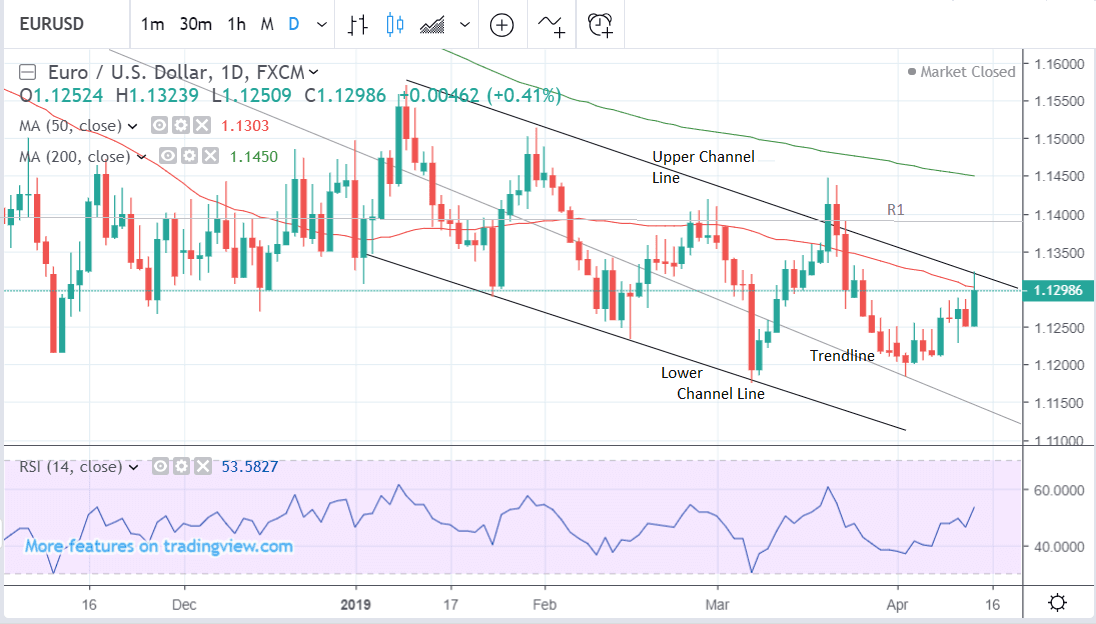 Despite the overall downtrend the latest move within the channel has been up and could arguably constitute the very beginning of an uptrend. 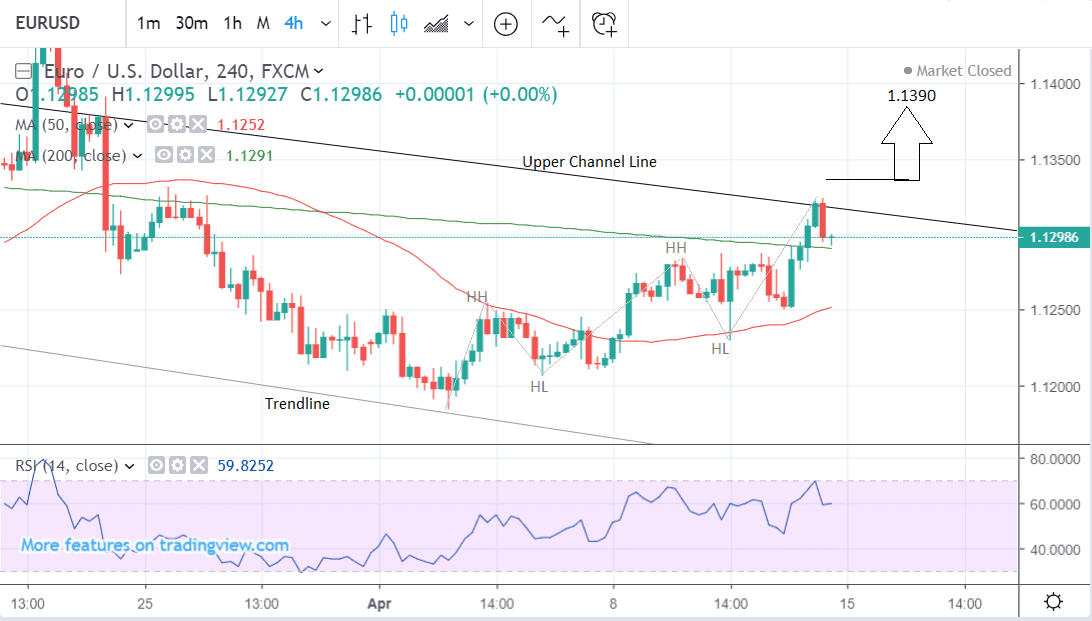 Viewed on the 4hr time frame - the short-term - the most recent tranche of market action is arguably bullish because the market has started a new sequence of rising peaks and troughs and this is the first clue of a reversal.

It is possible to hold the view, therefore, that the trend has now flipped and the dominant short-term trend is higher, and that given the old adage that the ‘trend is your friend’ the pair will probably carry on rising, with a breakout as probably the more likely of the two scenarios.

Assuming this to be the case, some confirmation would be useful to add confidence to the bullish call. This might be provided, for example, by a break above the 1.1335 level. Such a move would probably then extend to a target at the R1 monthly pivot at 1.1390. 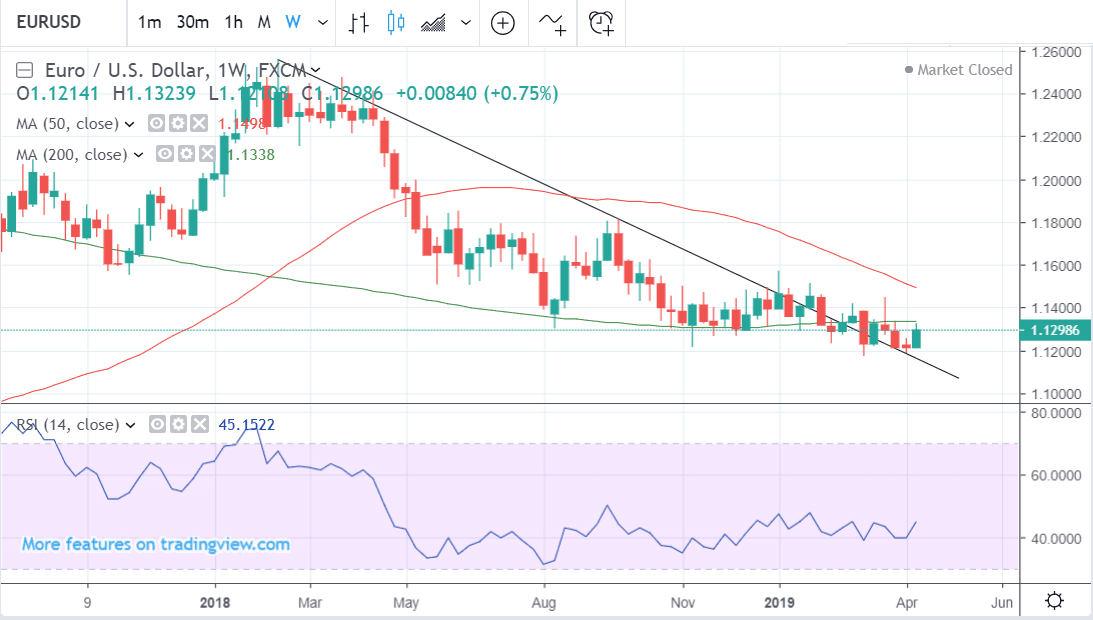 The weekly chart above - which provides a longer-term view of the exchange rate - still tells a cautionary tale for bulls: the pair still remains below the 200-week moving average (MA) - a pivotal support and resistance level for the pair.

It is not the only resistance level, either - looking back at the daily chart we also note the 50-day MA capping gains at 1.1303 more immediately, and the actual upper channel line of the descending channel too. These three lines together reinforce the resistance at the current highs.

Momentum, as measured by the RSI indicator, is bullish on the weekly chart as it is converging with price action and failed to confirm the recent lows.

On the daily chart, however, it is neutral.

Short-term momentum appears to have shifted to the downside for the U.S. Dollar, with the currency only being underperformed by the Japanese Yen and Swiss Franc last week.

That the Franc and Yen were the two underperformers immediately tells us something: markets took a decisive cue from global investor risk sentiment. The Yen and Franc are considered safe-haven currencies that benefit when global markets are being sold off, typically when investors take fright from any development or developments they believe bode poorly for global growth. The opposite performance by the Yen and Franc is true when markets are optimistic.

Often, the Dollar performs the same risk-haven function as its Swiss and Japanese colleagues, hence we believe the strong market response to improved Eurozone and Chinese data worked againt the Dollar.

"Risk appetite continued to recover last week, but this time G10 currencies performed better at the expense of the USD as confidence that a global recession could be avoided grew," says Timothy Fox, Head of Research & Chief Economist at Emirates NBD.

Therefore it could be that short-term developments in global investor sentiment are what matter for the Greenback over coming days.

Domestically, a welter of lower-tier data is scheduled in the week ahead and although none of the releases on their own are likely to be market moving, taken together, they may produce an effect on the Dollar.

The main consideration is whether they start to influence the outlook for Federal Reserve interest rate policy. The thinking is that although the Fed is not currently expected to raise interest rates in 2019 it may do if the data starts to improve.

“Economic releases out of the United States next week may not necessarily be very headline grabbing but could nevertheless steer the dollar in a more decisive pattern as investors ponder whether a Fed rate cut in 2019 is on the cards,” says Raffi Boyadjian, an economist at FX broker XM.com.

Last week saw slightly stronger-than-expected readings for both the key releases factory orders and inflation. If the trend spills over into the week ahead it could start to gently support the Dollar.

The Empire State manufacturing index is forecast to come out at a higher 8.1 in April from the 3.7 in the previous month when it is released at 13.30 BST on Monday.

“The New York Fed’s manufacturing activity gauge will be one of four indicators on US production, with investors hoping for the emergence of an uptrend. The various US manufacturing surveys have so far been mixed, so further convincing signs of a pick up in growth will be welcome by dollar bulls,” says Boyadjian.

The next manufacturing gauge to be released is the Philly Fed manufacturing index in April, which is forecast to show a slight decline to 11.2 from 13.7 previously. Again, a better-than-forecast result could support the Dollar if it forms part of a trend.

Official industrial production numbers for March are forecast to show a 0.2% rise from 0.1% previously when released on Tuesday,

April manufacturing PMI’s from data provider IHS Markit are forecast to show a recovery to 52.8 from 52.4 when released at 14.45 on Thursday. Services PMIs are forecast to decline slightly to 55.0 from 55.3.

March retail sales are forecast to show a strong 0.9% rise in April when released on Thursday at 13.30 BST. This may be partly due to the -0.2% fall in March.

Core retail sales, which omit autos and petrol, meanwhile, are forecast to rise by a slightly slower 0.5%.

“Along with the manufacturing data, the retail sales figures will be key in assessing the health of the US economy and hence, driving the greenback. Retail sales are forecast to have returned to growth in March after a surprise drop in February,” says Boyadjian.

The main fundamental drivers for the Euro in the week ahead are likely to be the release of the two sets of sentiment surveys - the ZEW economic sentiment and flash PMI surveys for manufacturing and services for April.

The ZEW economic sentiment index in Germany is the first to be released on Tuesday at 10.00 BST when the balance of optimistic to pessimistic responses is forecast to show a rise into positive territory to 1.0 from -3.6 previously. This would be its highest reading of 2019.

All eyes will be on this release with markets trying to gauge whether Germany's recent run soft economic performance is coming to an end.

The Euro was bid last week as industrial production statistics suggest the first signs of spring are starting to show for the economy; confirmation of this would almost certainly play positive for the single-currency.

The ZEW economic sentiment index for the Eurozone as a whole, meanwhile, is expected to come out lower at -9.5 from -3.6 previously.

The ZEW is often viewed as a leading index for the wider economy so if it rises strongly it is taken as a positive sign for the Euro and can lead to gains for the currency.

The first set of Eurozone PMIs in April are scheduled for release at 9.00 on Thursday. They could have a greater than expected impact. Current market expectations are for manufacturing sector activity to recover to 48 from 47.5 and services to fall slightly to 53.1 from 53.3.

PMI’s have been in decline since the start of 2018 but some economists think they might be bottoming and due a rebound.

“There could be more positive news on Thursday from IHS Markit’s preliminary PMI readings for April. The Eurozone’s manufacturing PMI is forecast to rise for the first time since July 2018, edging up from 47.5 to 48.0 in April. The services PMI is projected to ease to 53.1 after two months of solid increases. Meanwhile, the composite PMI, which includes both manufacturing and services, is forecast to nudge higher from 51.6 to 51.7, indicating a slight acceleration in overall growth in the euro area,” says Raffi Boyadjian, an economist at FX broker XM.com. 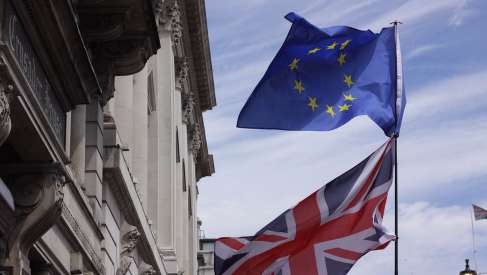 The Euro-Dollar rate set a new September low Thursday amid a tentative rebound in the greenback but some analysts say that with the perceived probability of a ‘no deal’ Brexit having reached new highs, the single currency has further to fall in the coming weeks as the favourable transatlantic growth outlook is challenged.

The Euro-to-Dollar exchange rate edged higher on Wednesday and is likely to advance further in the months ahead, according to analysts at Westpac, who say the single currency is “not overvalued” yet and that European Central Bank (ECB) concerns about recent gains might be misplaced.

The Euro-to-Dollar exchange rate appeared to be swimming against a tide Tuesday as momentum ebbed from the market even after a the September ZEW survey, a widely observed barometer of sentiment on the Eurozone economy, surprised sharply on the upside.