- GBP/EUR forecast higher
- UK's economic growth advantage to assist
- 1.25 could be in the frame

The British Pound could be on course to test its highest levels against the Euro since the referendum, according to new research.

A mid-year foreign exchange research and strategy review from French investment bank Société Générale shows they now look to sell the Euro against the Pound in anticipation of Sterling outperformance.

Pound Sterling Live reports this development as the Pound-to-Euro exchange rate (GBP/EUR) exchange rate reaches the significant 1.1700 level in mid-week trade, which now puts Sterling on course for a test of the three-month high located at 1.1720.

The rise back to 1.17 comes off the back of a gentle trend of ascent for GBP/EUR which fell sharply back in April as Sterling entered a mid-year lull following a blistering start to the year. 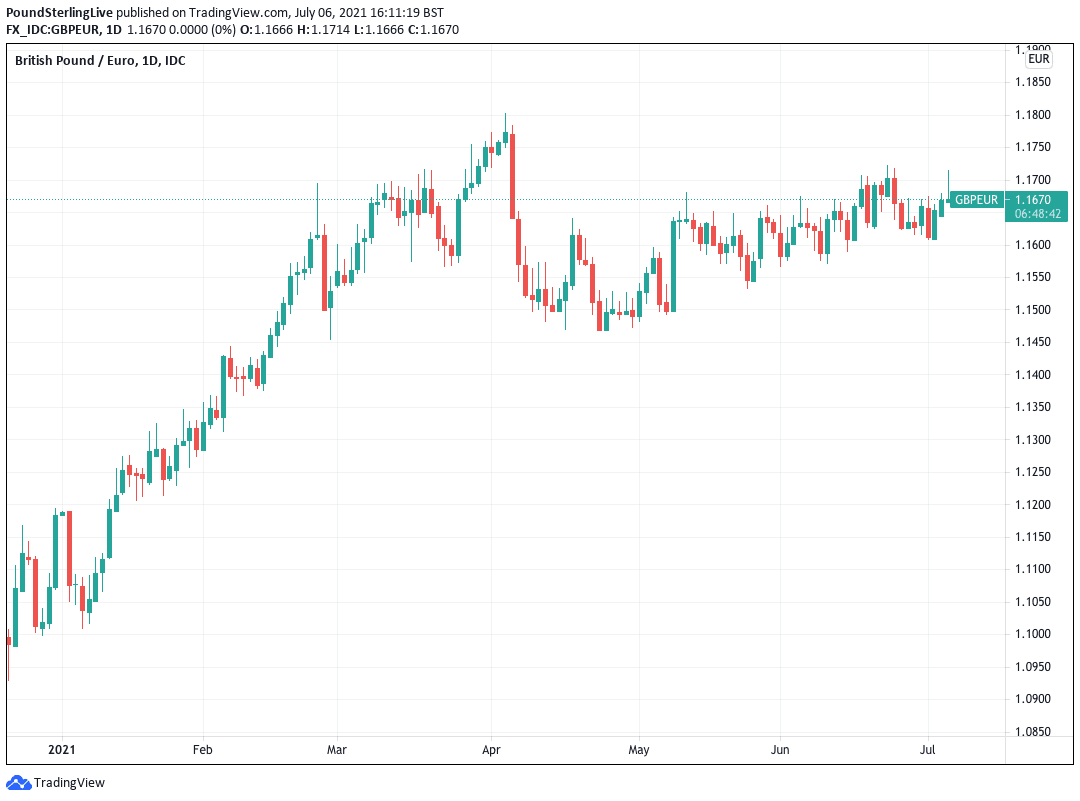 Given a lack of volatility across the foreign exchange market more generally, investors have been looking for new triggers that will bring more enticing levels.

With economies bouncing back from the harsh lockdowns of 2020, focus has fallen on economic growth and the response by central banks to that growth.

"We've been wondering where the next factor to drive sterling will come from," says Kit Juckes, Global Head of Foreign Exchange Strategy at Soc Gen in London, adding that a potential answer is UK economic growth outperformance relative to other countries.

He notes UK growth expectations have been revised higher relative to the rest of the European G10 currencies, which could give it an edge: 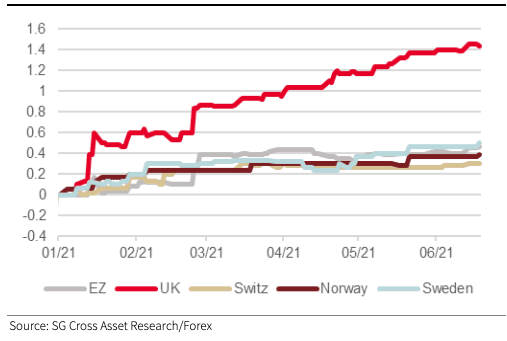 Soc Gen says the foreign exchange market in coming months will be focussed on which central banks are ahead in the race to normalise policy settings, a process that involves the ending of asset purchase programmes (quantitative easing) and raising interest rates.

Those that do so first will likely see their currencies appreciate relative to those currencies attached to laggard central banks.

"There will now be a greater focus on when the UK’s MPC will tighten monetary policy relative to the ECB. The MPC is significantly less dovish by instinct, and as the economy recovers, it will feel under pressure to act sooner," says Juckes.

The yield paid on government bonds tends to reflect market expectations for future central bank interest rate levels, with yields tending to rise if higher interest rates are anticipated in the future.

The difference in yields between territories in turn can influence currency flows, with currency flowing from where rates are low to where they are higher (a so-called carry trade).

Juckes finds that the differential in the yield on UK and the relevant Eurozone two-year bonds now firmly favours the Pound. 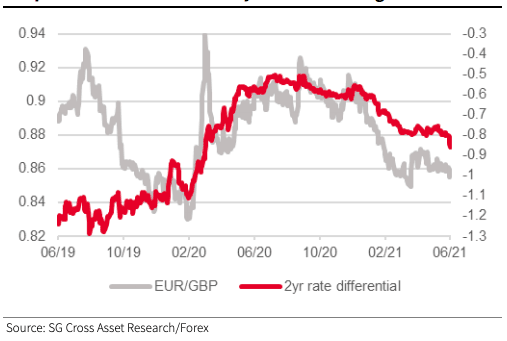 "While the ECB will be one of the last central banks to raise interest rates – if it manages to at all - the UK MPC is more in tune with the Federal Reserve. If the global economy were to recover sufficiently for the Federal Reserve to think about tightening in, say, 2022, there would be speculation that the UK might follow suit," says Juckes.

The Dollar's rise in response to the June Federal Reserve policy update provides an example of how expectations for central bank rates are impacting currencies at present.

"The hawkish turn in US monetary policy expectations triggered by the 16 June FOMC meeting marked the beginning of a new phase of strength for the USD," says Shahab Jalinoos, Global Head of FX Strategy at Credit Suisse.

The GBP/EUR exchange rate has been trending gently higher for three months but ultimately remains in unremarkable territory, at the start of July it still remains some way off the April 02 highs of 1.18.

In their mid-year briefing Soc Gen told clients they were looking to sell EUR/GBP in anticipation of potential outperformance by the Pound.

They forecast a move potential move to 0.80, which gives a GBP/EUR exchange rate point target of 1.25.

Pound Sterling Live reported last week that strategists at BMO Capital Markets say they continue to favour the Pound over the Euro, citing the UK's shifting trade relationship with the EU and the rest of the world.

Stephen Gallo, European Head of FX Strategy at BMO Capital Markets says new data suggests to hims a "geographical shift underway", and this underpins his view that the Pound is a buy against the Euro on weakness.

Gallo notes that imports from the EU have dropped sharply since Brexit, which was fully realised at the start of 2021.

He says if the shift away from EU imports proves permanent the Pound could benefit.

"The 13% gap between the two figures is still intriguing, and it may be related to permanent shifts in the geographic flow of trade, particularly because the shifts are visible in merchandise trade too," says Gallo.

"We think there is a reorientation underway which may ultimately benefit the GBP, from angles related to the BoP and domestic economic growth," he adds.

BMO Capital say they favour selling the Euro on any rallies against the Pound.