- GBP/EUR resting on Fibonacci support but retains downside bias.
- Underperforms in wake of BoE decision, amid second wave fears.
- Seen on back foot while below 1.1228 and set to cede 1.10 handle.
- Policy support, Brexit deadlock, coronavirus second wave in focus.

The British Pound ceded ground to all major rivals last week but has been left resting on a major technical support level that could break its fall against the Euro over the coming days, although the currency still risks underperformance more generally.

The Pound-to-Euro exchange rate came to rest on the 50% fibonacci retracement of its March-to-April recovery rally after the British currency underperformed all majors other than the Norwegian Krone Friday, marking a soft finish to another week at the bottom of the major currency performance table.

The Pound enters the new week at 1.1044 and benefits from Fibonacci support at 1.1032, but analysts say appetite will be limited by continued deadlock in Brexit trade talks and concerns about whether the Bank of England (BoE) and government are doing enough to support the economy. 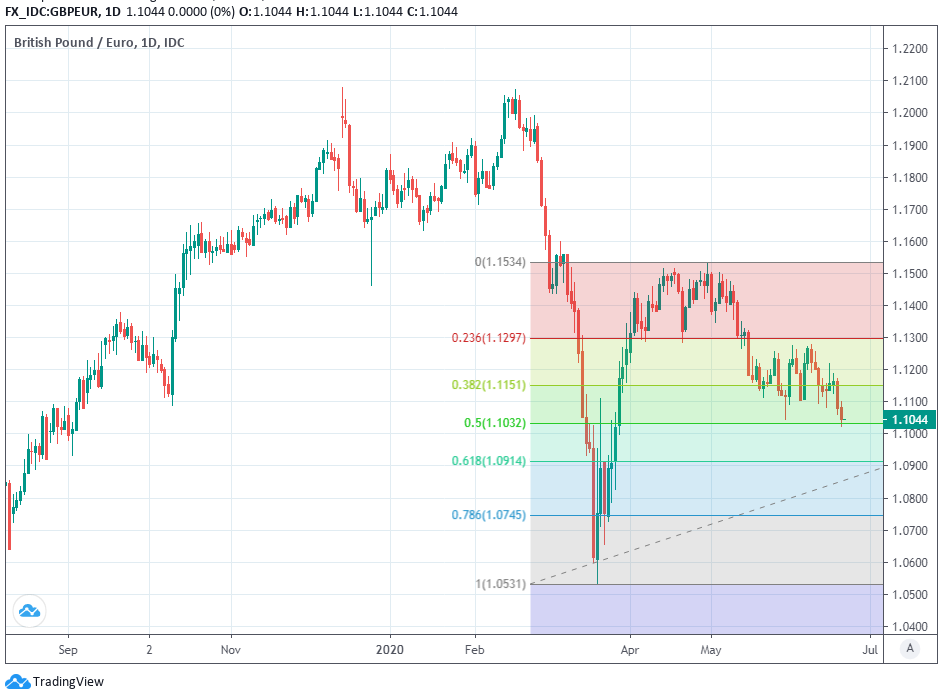 Above: Pound-to-Euro rate shown at daily intervals with Fibonacci retracements of March-to-April recovery.

"EUR/GBP has rallied higher following a sell off in Sterling and is well placed to re-challenge .9056/86," says Karen Jones, head of technical analysis for currencies, commodities and bonds at Commerzbank. "A bullish bias will be maintained while above the short term uptrend at .8906."

From a Pound-to-Euro rate perspective, Jones says GBP will retain a downward bias so long as its below the 1.1228 level and is looking for it to slide toward 1.0888 and then 1.0726 once below the aforementioned Fibonacci support level, although she says there's scope for a fall back to the 2008 low at 1.02 this summer.

Underperformance returned to blight Sterling last week after the June policy decision of the Bank of England (BoE), which expanded its bond buying programme £100bn in order hold down government borrowing costs, but said that it would buy government debt at a lesser pace into year-end.

The announcement was ultimately followed by widespread losses, which have been attributed to a range of factors including BoE's ongoing consideration of negative interest rates as a policy tool and perceptions that the bank and government are lessening support for the economy at a time when its a long way from being out of the woods.

"Sterling failed to benefit as the market remains focused on the odds of negative rates. While not discussed at the BoE meeting, it was not ruled out by the Governor during the press conference. This is important for sterling's prospects as the stalling UK-EU trade negotiations suggest that the market will likely take a glass half empty approach and keep GBP risk premium in place (both from the economic side well as from the possibility of negative rates). This suggests GBP is to continue struggling, EUR/GBP to move to /above 0.91 this summer," says Petr Krpata, chief EMEA strategist for interest rates and currencies at ING, who forecasts Sterling will fall below 1.10 this summer.

The BoE's decision to stretch its bond purchases into year-end implies a lesser degree of support for the economy and also that markets will have to absorb the increased supply that's expected to result from the government's 'lockdown' related borrowing. The slowdown comes as the government seeks to wind down its costly wage subsidy scheme, although some analysts are concerned that support might be being withdrawn too early.

"We see the BoE as having to do more and there are downside risks for the pound as the government pulls back its unprecedented support in the coming months," says Derek Halpenny, head of research, global markets EMEA and international securities at MUFG. "We are still very much in the high uncertainty stage of not having much clarity on the full and eventual scale of recovery and hence the markets rightly have reacted badly to the explicit guidance that indicates perhaps a sooner than anticipated slowing in Gilt purchases." 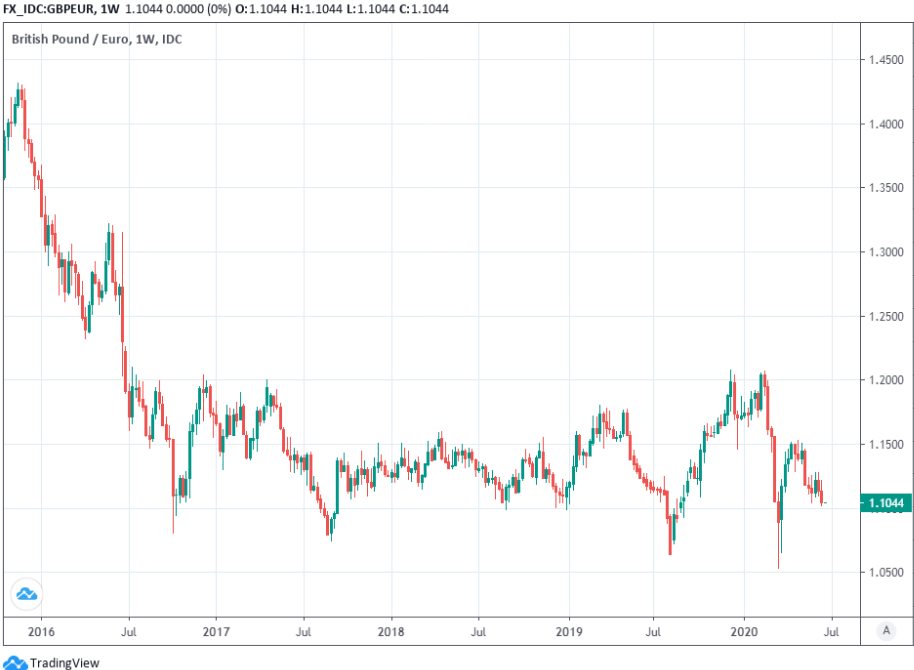 Withdrawing policy support as businesses are encumbered by government social distancing regulations risks deepening and prolonging the bloodbath in the services-heavy economy.

The UK was the last major European country to contract the coronavirus but could face the highest costs as a result of it and is lagging all of its developed world counterparts in reopening.

Supposedly non-essential retailers were allowed to open for the first time since March last week while pubs and restaurants may be able to do so from July, although all will be clobbered by cumbersome and costly social distancing rules for which there has so far been no compensation offered by government.

"The BoE's agents' score of employment intentions fell to a record low in May, consistent with a 4% peak-to-trough fall in employment that would be twice as big as the slump in the last recession. Other surveys signal that many businesses which have furloughed workers will either fire them or only bring them back part-time in the autumn," says Samuel Tombs, chief UK economist at Pantheon Macroeconomics. "The resulting outlook for prolonged weakness in wage growth and domestically-generated inflation likely will compel the MPC to do more to stimulate the economy in the winter."

The economy will be back under the spotlight this week with the release of flash PMI surveys for the month of June at 09:30 on Tuesday, with a particular focus on the pulse of the services sector, the UK's economic engine. Consensus is looking for the IHS Markit Services PMI to rise from 29 to 39.1, extending the rebound off April's historic low of 12.3, although this would still see the UK barometer trailing its Eurozone counterpart. Meanwhile, the manufacturing PMI is seen rising by a much lesser 4.5 points from 40.7 to 45.2.

Beyond economic headlines, the ebb and flow of market risk appetite remains a significant influence on the Pound, which saw Friday as stock markets crumbled in response to more evidence of a coronavirus second wave, with the World Health Organization notifying of 150k new infections, the highest daily count so far. The announcement was made in the WHO's daily briefing and came at the tailend of a week dominated by concerns about a second wave disrupting a global economic recovery.