- But outlook negative so long as 1.1519 April high left intact.

- ECB support for periphery bonds could lift the EUR this week.

- While returning 'no deal' Brexit concerns could weigh on GBP. 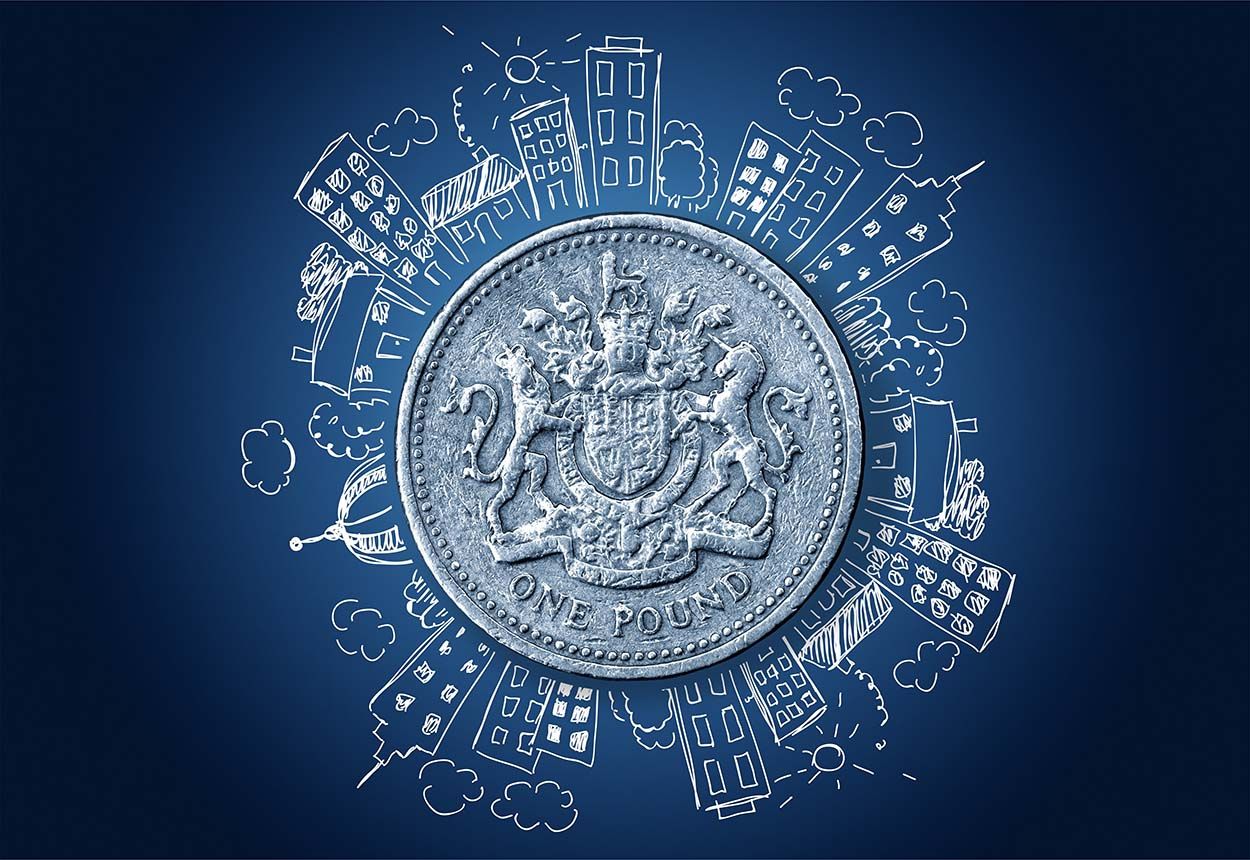 The Pound-Euro rate is recovering its footing on the charts and may attempt to tentatively explore its upside potential over the coming days but a possible Doji candle on the weekly charts is a negative omen for the trend in the exchange rate and Brexit concerns are returning to haunt the British currency.

Sterling fell 0.67% against the Euro last week even though investors shunned the single currency amid uncertainty about the long-term unity of the bloc, which wasn't enough to prevent a weekly decline in the Pound-Euro rate. The Pound underperformed all major rivals other than the oil-linked Norwegian Krone.

The British currency did however, bounce off its 21-day moving-average early on last week and pare a large part of its loss heading into the weekend. Technical analysts say this now brings the 55-day moving-average at 1.1437 and the April 2020 high of 1.1519 into focus for the week ahead, and that a daily close above the latter level could nullify a bearish outlook on the charts.

Commerzbank has been looking for Sterling to reverse lower and potentially fall back to its 2008 financial crisis low of 1.02 against the Euro in the months ahead, but the odds of this happening might be challenged this week.

"While it holds we remain neutral," says Axel Rudolph, a senior technical analyst at Commerzbank, of the 1.1519 level. "A drop and daily chart close below the .8681 current April low would negate our medium-term forecast and trigger a slide to the late November, December and January highs at .8609/.8597." 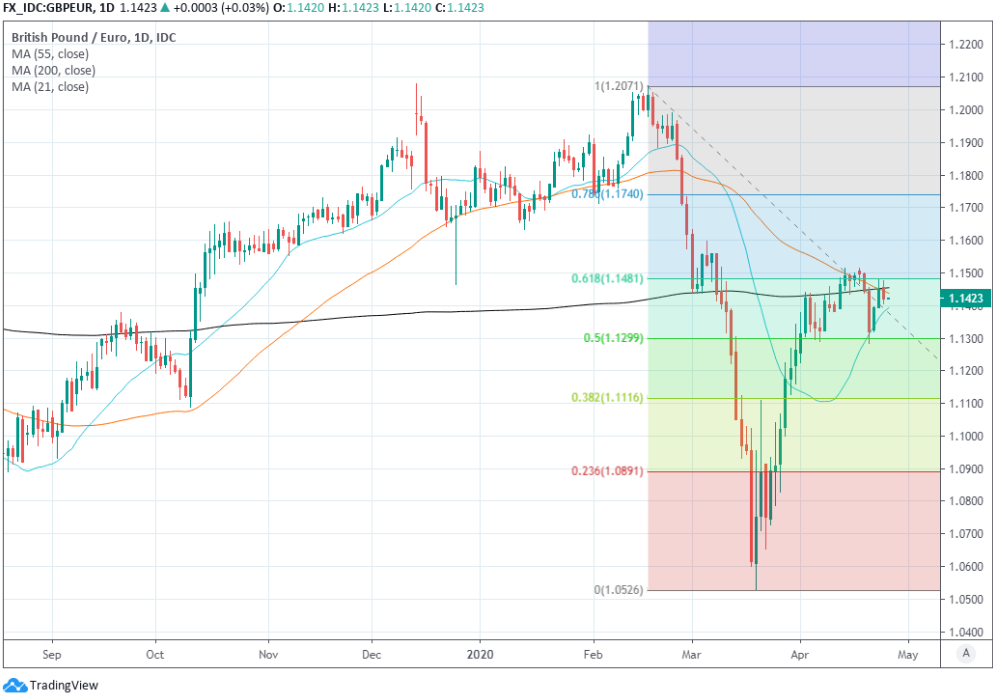 Above: Pound-to-Euro rate at daily intervals with Fibonacci retracements of 2020 downtrend and key moving-averages.

Rudolph says Sterling would have scope to extend higher to 1.1631 if it can overcome the 1.1519 level on a daily closing basis, which would be the highest for the British currency since February. However, the outlook for the Pound-Euro rate might be darkened this week if Sunday night's price action produces anything other than a very strong boost because without that, when the clock strikes midnight a doji candle will appear on the Pound-Euro rate weekly chart that could indicate a turn lower is ahead.

The weekly candle will close at midnight Sunday and a new one open, but without a strong lift from the 1.1423 level either a 'doji' candle will appear on that chart or another down-week that leaves the exchange rate appearing as if it's been rejected by the 61.8% Fibonacci retracement of the 2020 downtrend. Both of those latter outcomes could be taken as bearish for the outlook.

"A doji pattern is formed when the open and closing prices occur at roughly the same level. Hence, this candlestick pattern does not feature a significant real body per se. Implications: The lack of a real body indicates market indecision in a bullish or bearish trend. As such, the doji pattern can serve as a bearish reversal pattern in an uptrend, or a bullish reversal pattern in a downtrend," says George Davis, chief technical strategist at RBC Capital Markets, in a brochure explaining key concepts to clients. More on that here.

What's more, price action will come as Brexit headwinds return to haunt Sterling and at a time when the Euro might be gaining support from the prospect of further European Central Bank (ECB) support for the 'periphery' bond market. Each of these things on their own is enough to weigh on the Pound-Euro rate although if combined together then things might get ugly for Sterling. 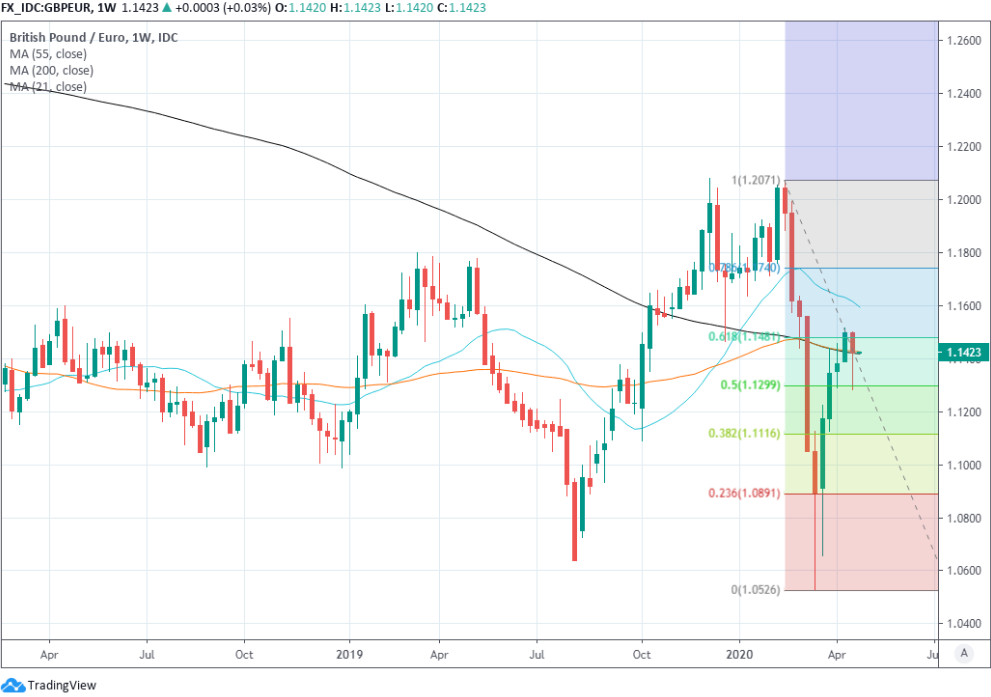 Above: Pound-to-Euro rate at weekly intervals with Fibonacci retracements of 2020 downtrend and key moving-averages.

UK and EU negotiators said Friday that only "limited progress was made" in bridging differences at the end of the first round of Brexit negotiations to take place since the onset of the coronavirus crisis in Europe, which brings into focus an end-June deadline for the UK to extend the Brexit transition period beyond December 31, which is just less than nine weeks away.

"There are two reasons why a "WTO Brexit" in some form or another is looking more likely. The first reason is that the UK government needs all the flexibility it can get and, let's face it, EU membership and the term "flexibility" are not exactly synonymous with one another. The second reason is that, in the current economic climate, most countries will want to continue trading with the UK with or without a free trade agreement in place," says Stephen Gallo, European head of FX strategy at BMO Capital Markets, in an April 17 note to clients.

A lack of progress in the negotiations risks stoking fresh fears over a ‘no deal’ Brexit ‘cliff edge’ and a return of the associated ‘risk premium’ that dogged the British currency last year and on many other occasions since the 2016 referendum. That would be bearish for the Pound-to-Euro rate and if such concerns were to weigh heavier on Sterling this week they'd be doing so at a point when the ECB might be having a supportive effect on the single currency, which could amplify the downside for Sterling.

The ECB will set out its latest monetary policy decisions at 12:45 on Thursday and expectations are that at the very least, it could make clear to markets that it stands ready to increase the size of the quantitative easing programme launched to support Eurozone members dealing with the coronavirus crisis. Quantitative easing crushes bond yields and is normally bad for currencies, although the Euro has a negative correlation with Italian bond yields during times of crisis and its those yields that would fall the most in response to any further pledges of support for the periphery bond market. 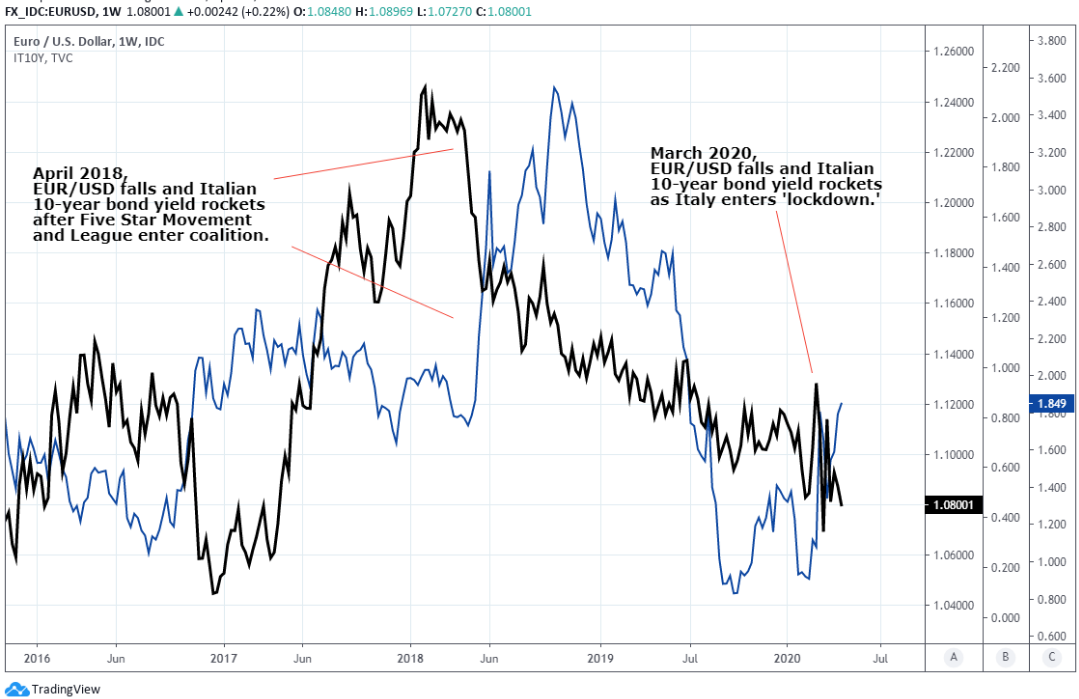 Italian yields have surged this year amid concerns over the debt sustainability implications of fiscal support given to the coronavirus-battered economy, partly explaining the row between Eurozone member states over the European response to the crisis. This has weighed on the Euro-to-Dollar rate and helped lift the Pound-Euro rate off prior lows but with a European response to the crisis still largely absent, there is a chance the ECB could seek to squash 'periphery' economy yields further this week.

That might lift the Euro-to-Dollar rate and weigh on the Pound-to-Euro rate unless GBP/USD can keep up with its continental counterpart. The Pound-Euro rate always closely matches the sum of GBP/USD over EUR/USD. GBP/USD might also be apt to underperform EUR/USD if the UK's continues to lag continental counterparts in efforts to reopen its economy from the coronavirus lockdown. It was last in the continental line to suffer from a coronavirus outbreak so might be expected to lag others anyway, although a shortage of testing kit and personal-protective-equipment could exacerbate this.

As other countries increasingly look to return to some semblance of normality, the UK could begin to stick out like a sore thumb if for one reason or another, it's not able to keep pace with its counterparts. That might leave the country looking like a true 'sick man of Europe', if not the broader developed world, which would almost certainly be bad for Sterling. Prime Minister Boris Johnson returns to work on Monday from his own battle against the pneumonia-inducing virus and will come under intense pressure from all corners, with the market potentially included, to set out a plan for the reopening of the economy.

"The move to unlocking the UK economy looks like it may well end up being slower than elsewhere. Daily testing (per 1,000) is well down in the UK compared to other key countries. The outright figure (per 1,000) was 6.11 in the UK as of 22nd April, again the worst of all the key countries worst impacted. Italy, Spain Portugal, Germany and Denmark are all notably higher," says Derek Halpenny, head of research, global markets EMEA and international securities at MUFG. "A lack of testing for COVID-19 coupled with policy implementation risks could quickly see GBP underperformance materialise over the coming weeks."