Image © Adobe Images. The above is a stock photo.

Currencies are driven by expectations for economic growth, inflation and interest rates but technical factors are also an important and often poorly understood influence on price action, so what follows are definitions and explainers for some of the terms most frequently encountered by Pound Sterling Live.

Frequent periods of silence and inaction among central bankers can often leave currencies, as well as those who trade them, short of ideas on where exchange rates might head next. And in such circumstances many often increasingly turn to technical analysis for clues on what might be in the pipeline, even though the discipline itself frequently produces some of its best results when asset prices are trending clearly in one direction or another.

Bouts of economic consolidation or uncertainty like the present can easily prolong the silence of central bankers, and the uncertainty about the outlook for interest rates. A good example of this is the 2020 Federal Reserve (Fed), which said in December that so long as U.S. growth is “sustained”, the jobs market remains “strong” and inflation is “near the symmetric 2 percent objective" the current 1.75% level of interest rates would "remain appropriate”.

The Fed's guidance is problematic for those who're looking to optimise the timing of transactions in the currency market because new and definitive information about the current U.S. economic situation will be thin on the ground until the second quarter, leaving bond and currency markets partially blind to what's lurking on the path ahead.

And in the meantime some analysts and investors will use technical analysis for guidance on what to do about their currency exposure while Pound Sterling Live, as an observer of many things related to exchange rates, will write about the resulting insights and actions as they emerge.

This will inevitably result in the use of much technical parlance that won't necessarily be understood by all, so below are definitions and explainers of some of the terms likely to be most frequently encountered by readers.

The definitions, examples and graphs below are from a report written by George Davis, chief technical strategist at RBC Capital Markets.

There is lots of information available about this subject on the internet but RBC has been named Best Bank for Technical Analysis in the currencies and bonds categories for two years running, while Davis himself was named Technical Analyst of the Year in both 2018 and 2019.

"Technical analysis is best defined as the use of charts in order to study market price activity. The ultimate objective is to use this information in order to attempt to forecast future price trends," Davis says. "Key tenets that underpin the technical approach include: Market prices move in trends • Market action reflects all known information that is available • The past predictive value of price patterns that reflect the bullish or bearish psychology of the marketplace are assumed to apply in the future."

Clicking on any one of the graphs below will prompt an additional browser tab to open, in which a larger version of the image will be displayed.

"Support is denoted by a series of reaction lows or troughs under the market where demand is sufficient enough to overcome supply." 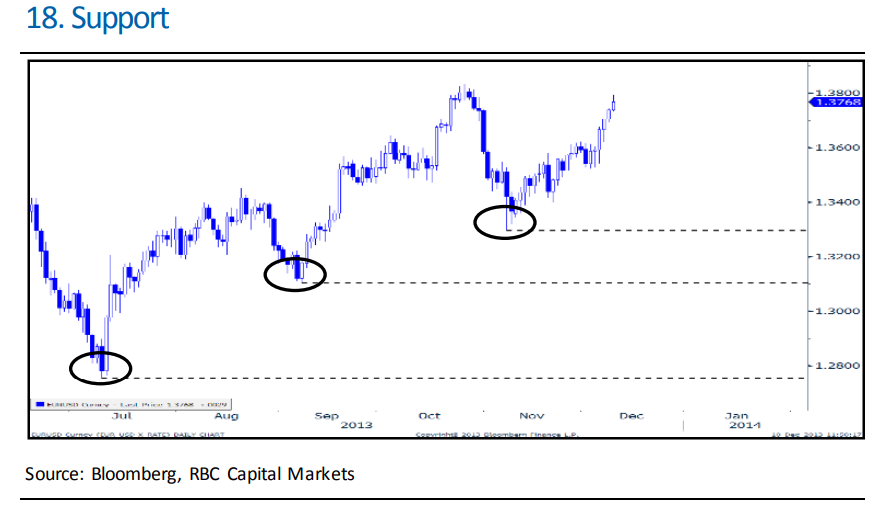 "Resistance is denoted by a series of reaction highs or peaks above the market where supply is sufficient enough to overcome demand."

Davis says resistance levels are expected to halt upward price moves before generating price declines. However, and in a similar manner to support levels, once broken resistance thresholds can undergo a role reversal that ultimately sees them offering support to asset prices. 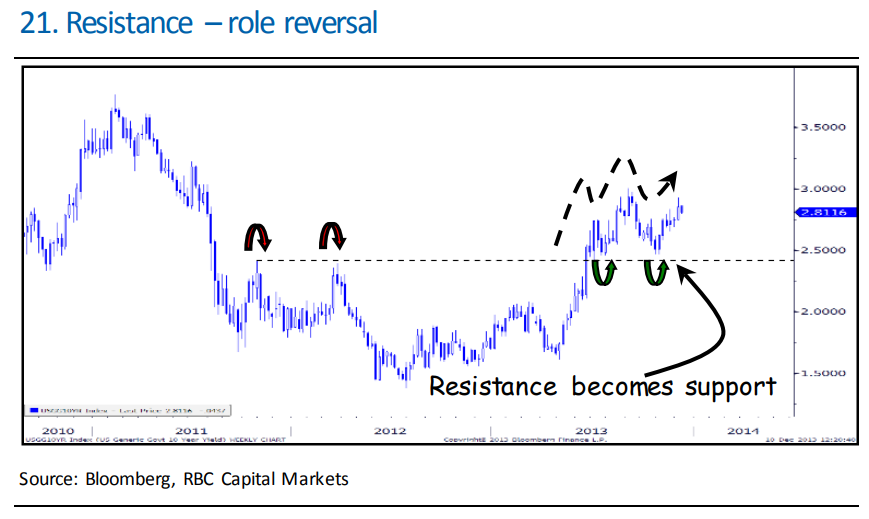 There are two types of trendline, with one having an upward slope and the other a downward trajectory. Davis says upward sloping trendlines serve as support for market prices but that it takes at least three points to form a valid trendline. He also says the longer a trendline remains in place, and the more times it's tested the market, the more significant it becomes. 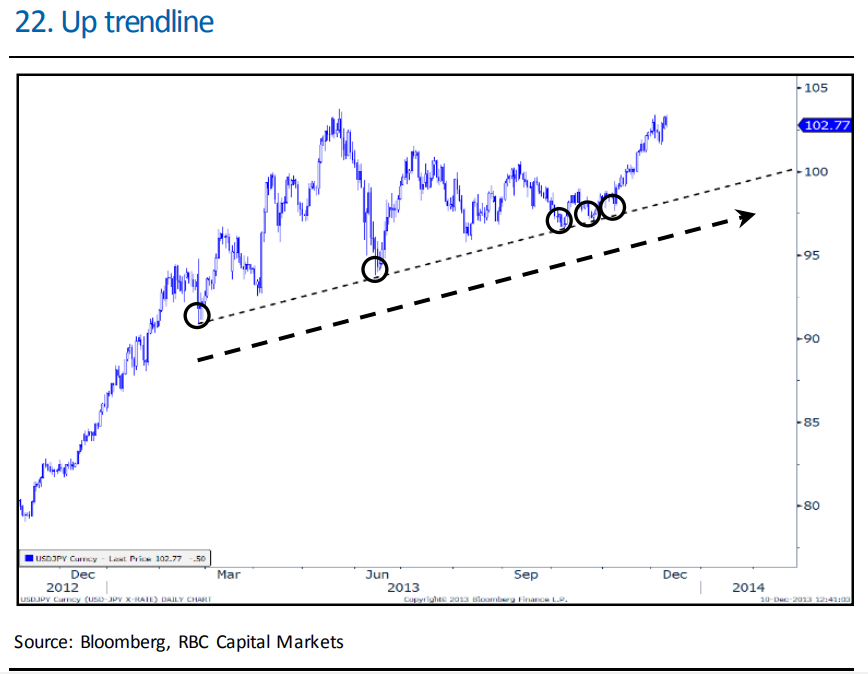 "Up trendlines serve as support and generate buying opportunities. Stop loss orders will likely be located below such trendlines, with a close below the trendline producing a bearish trend reversal," Davis writes.

Up and downward sloping trendlines can both undergo the role reversals often seen in other support and resistance levels.

"Down trendlines serve as resistance and generate selling opportunities. Stop loss orders will likely be located above such trendlines, as a close above the trendline would produce a bullish trend reversal," Davis says. 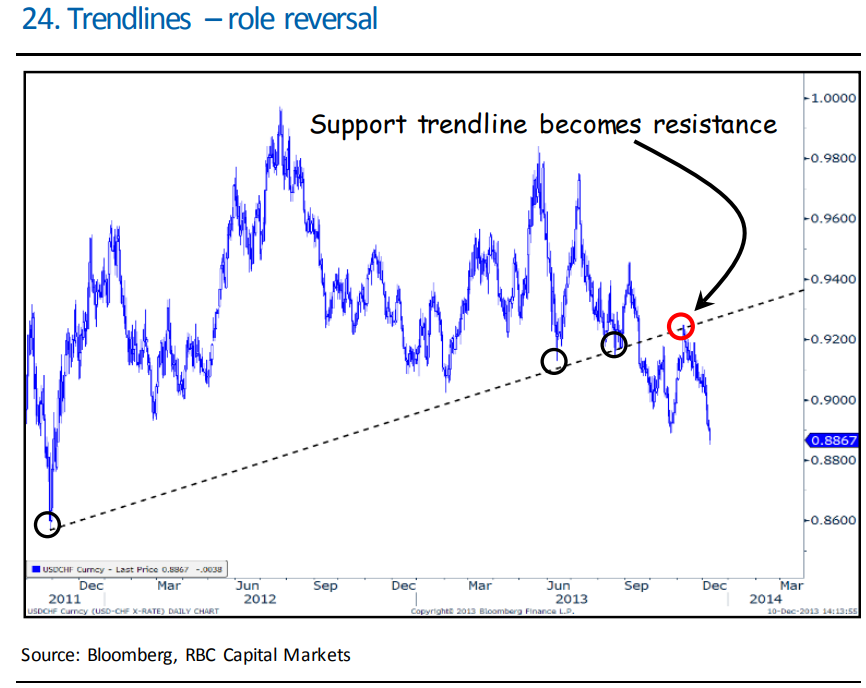 Moving averages are simply an average of a number of data points over a given period and in the context of currencies, data points are exchange rate levels.

Davis emphasises that moving averages do not anticipate prices. They simply react to them. And there are different kinds of moving average, covering different time periods and calculated using various methodologies.

"Important moving averages such as the 40, 55, 100 and 200-day often become support and resistance areas and are used to identify trend reversals. The moving average value may differ depending on the method used," Davis writes. "The simple moving average is commonly referred to as the arithmetic mean." 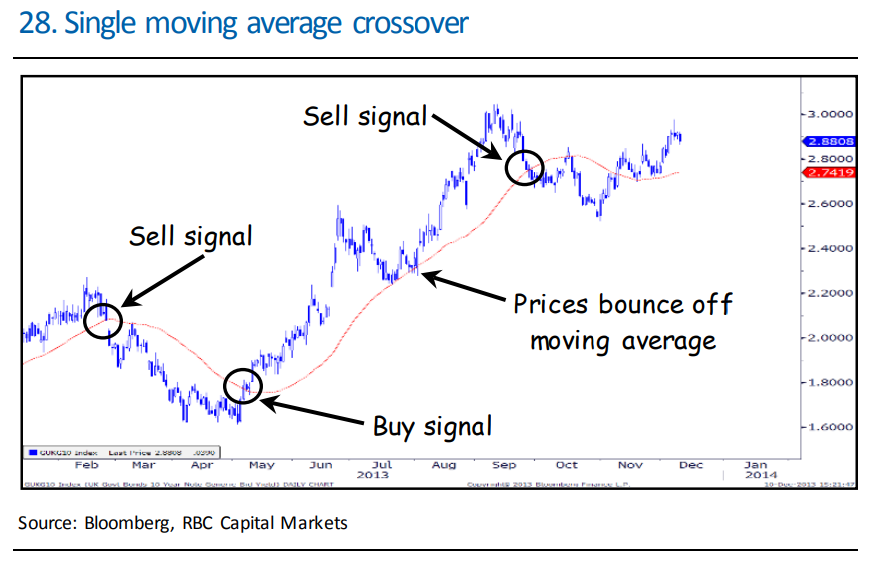 The other two popular methodologies produce the "linear/weighted moving average" and the "exponential moving average". The former is simply an average of prices for a given period, with each assigned a weighting. And the latter refers to an average that is not only "weighted" but also where a higher weighting is given to more recent price observations, with all price observations in a given period taken into account by the average.

Davis says that, conversely, when a shorter moving average crosses below a longer-term moving average it produces what's commonly referred to as a "death cross". These can be used by investors and traders as either  sell or 'take profit' signals, while the "golden cross" can be used as a buy signal.

That is the double crossover method, although Davis says the signal is "more effective in trending markets." 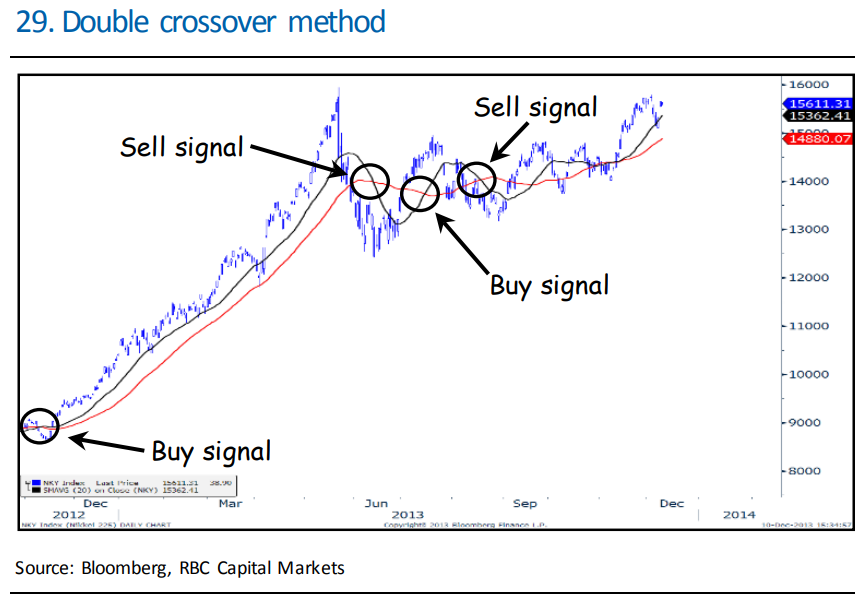 No price trend holds forever and most asset prices rarely go anywhere in a straight line. Trends can change, and frequently in some markets, so with the objective of technical analysis being the forecasting of future price trends the oft-cited Fibonacci ratios can be useful instruments.

These are sometimes referred to as "Fibonacci levels," which describes the price levels that the ratios themselves point toward.

Davis says Fibonacci ratios are often used once a "reversal pattern" has been confirmed in order to identify how far a counter-trend move in prices might extend. Reversal patterns indicate "consolidative price activity will resolve" in the opposite direction to the trend in place before the consolidation in prices began. 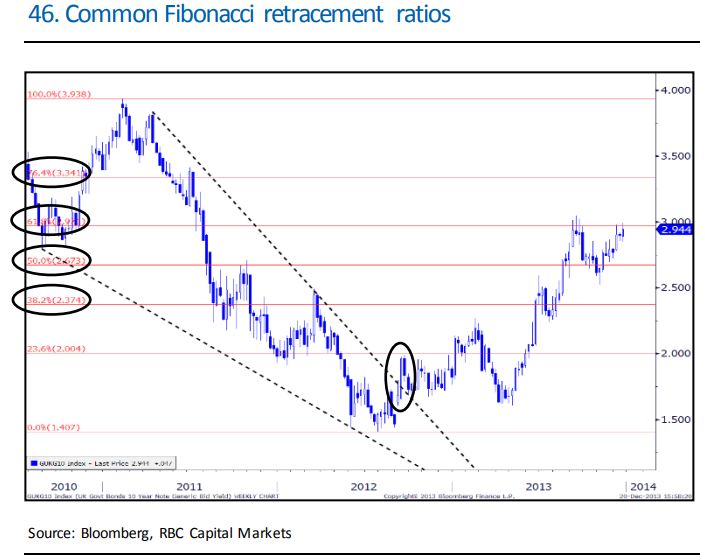