A provisional release of data covering German exports to the United Kingdom shows a significant decline is expected in January, compared with the same month a year earlier.

"German exports decreased by roughly 30% compared with January 2020, according to provisional calculations. Based on an extrapolation, exports to the United Kingdom continued to decline in January 2021 due to Brexit effects, after the year 2020 was characterised by the coronavirus pandemic," said the statistics office.

Germany is the UK's largest source of imports, delivering close to £60BN worth of goods a year to the UK according to the ONS.

The next release of official UK trade data is due on March 12 and economists will be eyeing the impact of Brexit on the country's export-import dynamics.

This is an important question for the British Pound on a long-term, fundamental basis as the country's trade deficit is believed to be one of the currency's achilles heal.

A key question in the post-Brexit era relates to how the trade deficit evolves: does it shrink as import demand reduces and the manufacture of some goods is brought to the UK in order to avoid non-tariff trade barriers, or do companies and consumers work around the changes and the old dynamics reassert? 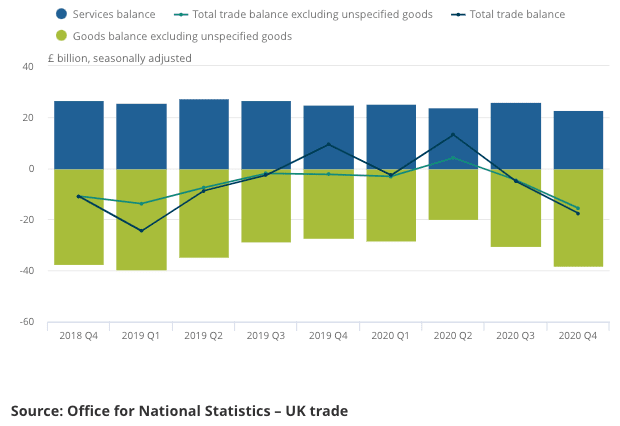 Above: UK quarterly trade balance up to the end of 2020.

The EU on the other hand implemented new measures on January 01, leading to sizeable delays at the UK's ports.

However, recent data does suggest the situation at the ports is stabilising as companies acclimatise to the new rules with freight levels having fully recovered by the end of February.