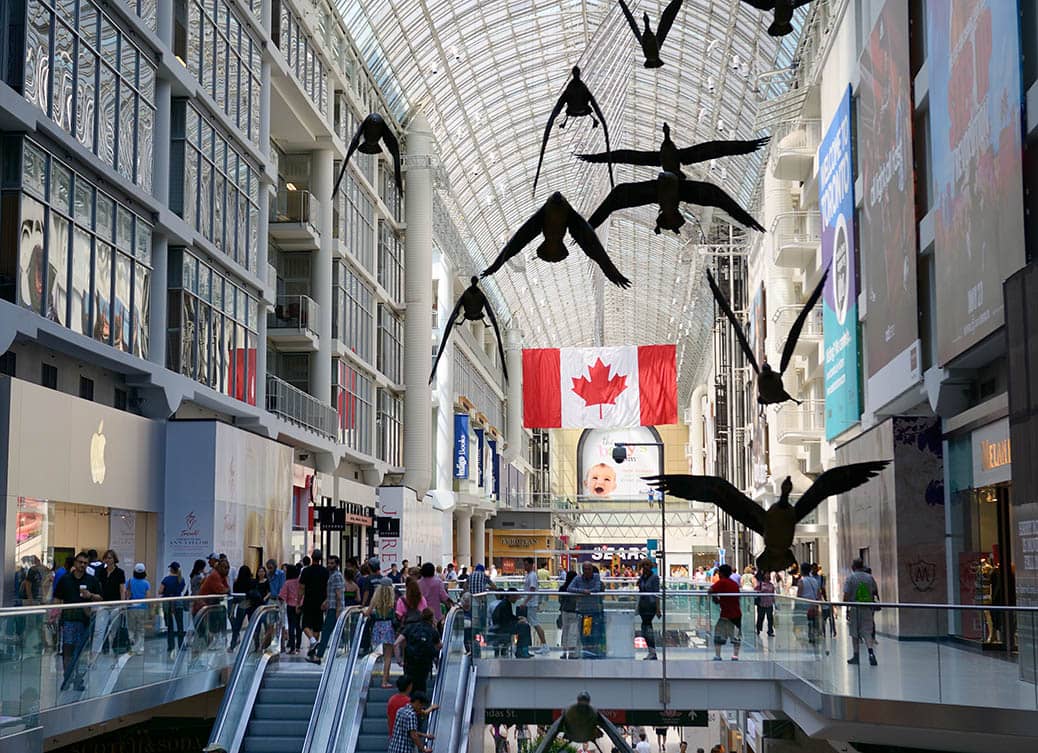 Canada's Dollar fell most heavily against a rallying Chinese Renminbi and Korean Won on Tuesday with losses of more than two percent but what was far more striking than this price action was the one percent gain in USD/CAD, which rallied sharply and even as most other U.S. exchange rates fell.

Asia Pacific currencies were the outperformers as financial markets appeared to wager again that a change in the Chinese government's approach toward the coronavirus might be in the pipeline.

Most currencies rose against the Dollar with the only exceptions being the Swedish Krona, Swiss Franc and the Canadian Dollar, which scraped the bottom of the barrel despite a September GDP report that painted the local economy in a resilient light for the third quarter overall.

"The figures released a month ago suggested a quarterly growth of 1.6% annualized. What came out was a whopping 2.9%, well above consensus expectations and the Central Bank's forecast of 1.5%," says Matthieu Arseneau, deputy chief economist at National Bank Financial Markets.

Above: GBP/CAD shown at 15-minute intervals alongside USD/CAD and EUR/CAD. Click image for closer inspection.

"Does this mean the central bank needs to respond more aggressively than we previously thought? Not so fast. While the headline GDP figure overshot consensus expectations due to a massive contribution from trade, the details of the report were not the most encouraging," Arseneau adds.

Canadian GDP rose by 0.7% last quarter following an upward revision to the August estimate of GDP and a 0.1% increase in September with growth driven by exports while being tempered by declines within interest rate sensitive segments of the economy like household investment and spending.

Tuesday's GDP report did little to slow the Canadian Dollar's descent, however, having interrupted the Loonie's sudden and heavy losses for only moments.

"GBPCAD’s resurrection is extending a little further still. After reaching the 50% Fib retracement of the 2022 decline (1.5738) midmonth, the GBP has reached the 61.8% retracement over the past couple of trading sessions," says Shaun Osborne, chief FX strategist at Scotiabank.

"Short-term trend momentum is solidly bullish at least but longer run studies have yet to flip from (residual) bearish signals," Osborne writes in a Monday review of the Canadian Dollar charts. 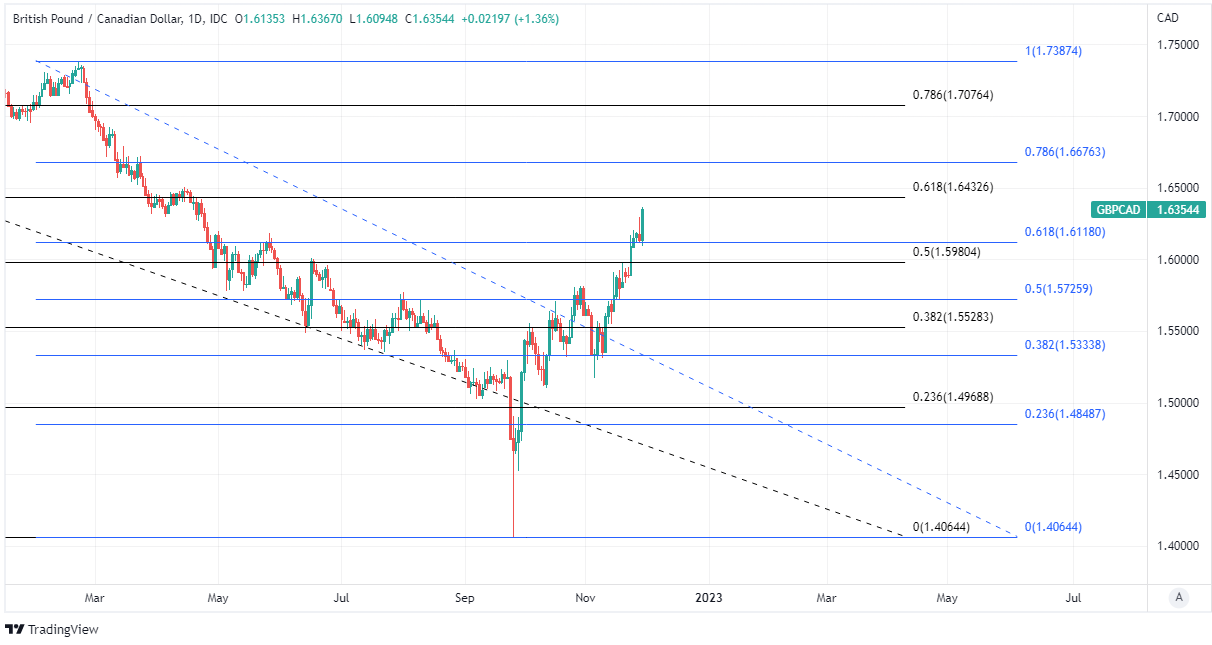 Above: GBP/CAD at daily intervals with Fibonacci retracements of January 2021 and February 2022 downtrends indicating possible areas of technical resistance for Sterling. 200-day moving-average denotes possible technical support. If you are looking to protect or boost your international payment budget you could consider securing today's rate for use in the future, or set an order for your ideal rate when it is achieved, more information can be found here.

Canada's Dollar fell heavily on Tuesday but was also carrying steep losses against all currencies in the G20 basket for the week to Tuesday with declines of more than two percent against some, although it still remained the third best performer in the G10 universe for the current year overall.

While the Loonie's continued grip on the third spot in the 2022 league table is testament of its strength earlier in the year, nascent losses may be indicating that an inflection point has been reached from which the Canadian currency might be expected to underperform.

Underperformance might be especially likely against Asia Pacific currencies if Tuesday's pattern of performance is anything to go by.

"Despite the move lower in the USD overnight against most currencies, the CAD is lagging its peers and remains an underperformer into the start of the session," says Bipan Rai, North American head of FX strategy at CIBC Capital Markets.

"We now have USD/CAD trading within a 1.30-1.35 range over the coming period and prefer playing that for now," Rai says in Tuesday commentary. 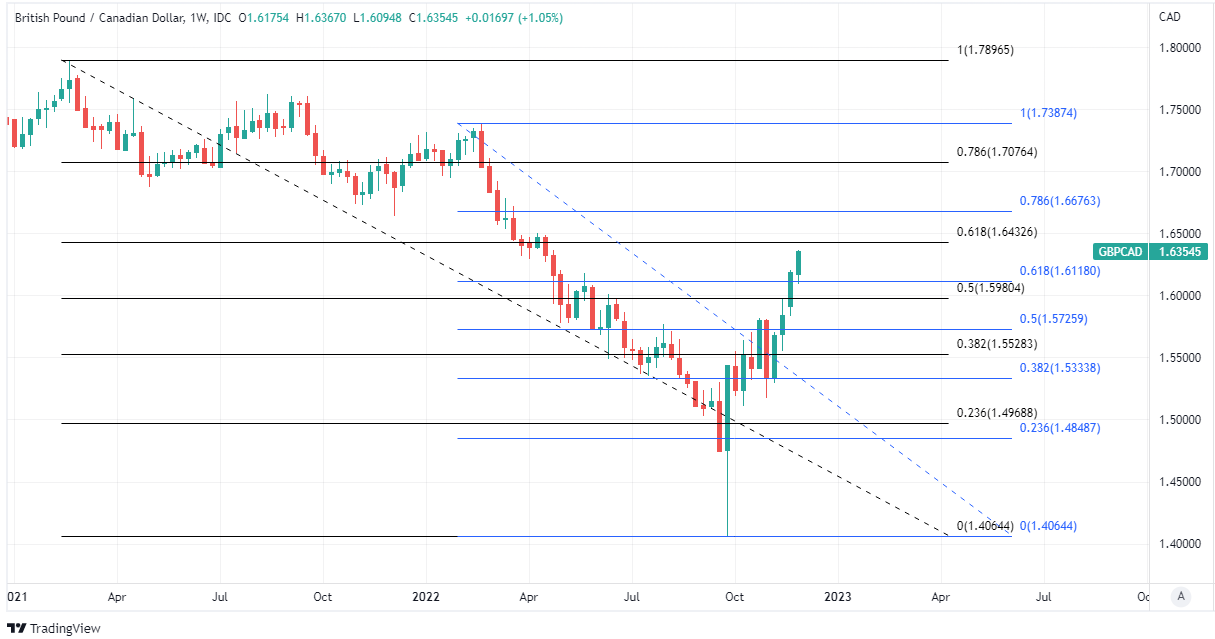