- GBP/CAD closes in on 1.75 amid risk aversion, FOMC shift
- USD/CAD in tentative 2021 highs on clean sweep for USD
- But UK, CA data could trigger correction ahead of weekend

The Pound-to-Canadian Dollar rate was closing in on multi-month highs in the penultimate session of the week after the Loonie was left reeling by risk aversion in global markets and the latest policy insights from the Federal Reserve (Fed), although correction risks are also rising into the weekend.

Pound Sterling was sold heavily against the greenback and lower-yielding funding currencies on Thursday but Canadian Dollar losses were far more pronounced, culminating in a USD/CAD rally that pushed the Loonie to 2021 lows while lifting GBP/CAD sharply.

A cacophony of concerns were cited by analysts for steep losses in stock and commodity markets that only served to put further wind into the sails of a resurgent greenback after minutes of July’s Fed meeting lifted the U.S. currency back onto its front foot in overnight hours.

“Yesterday's FOMC Minutes have induced a mild taper tantrum that has brought the BBDXY Index to a new high for the year. The rally has been exacerbated by a combination of risk off and Fed on. While the aggregate long-USD position of IMM leveraged funds in last week's survey was not huge, we think it is important to point out that the FX market is already long-USD,” says Stephen Gallo, European head of FX strategy at BMO Capital Markets.

“With that in mind, we suspect that follow-through may begin to get laboured right around this point. And of course there is always the risk that Fed Chairman Powell uses his Jackson Hole speech next week to correct the impression left by the Minutes,” Gallo adds. 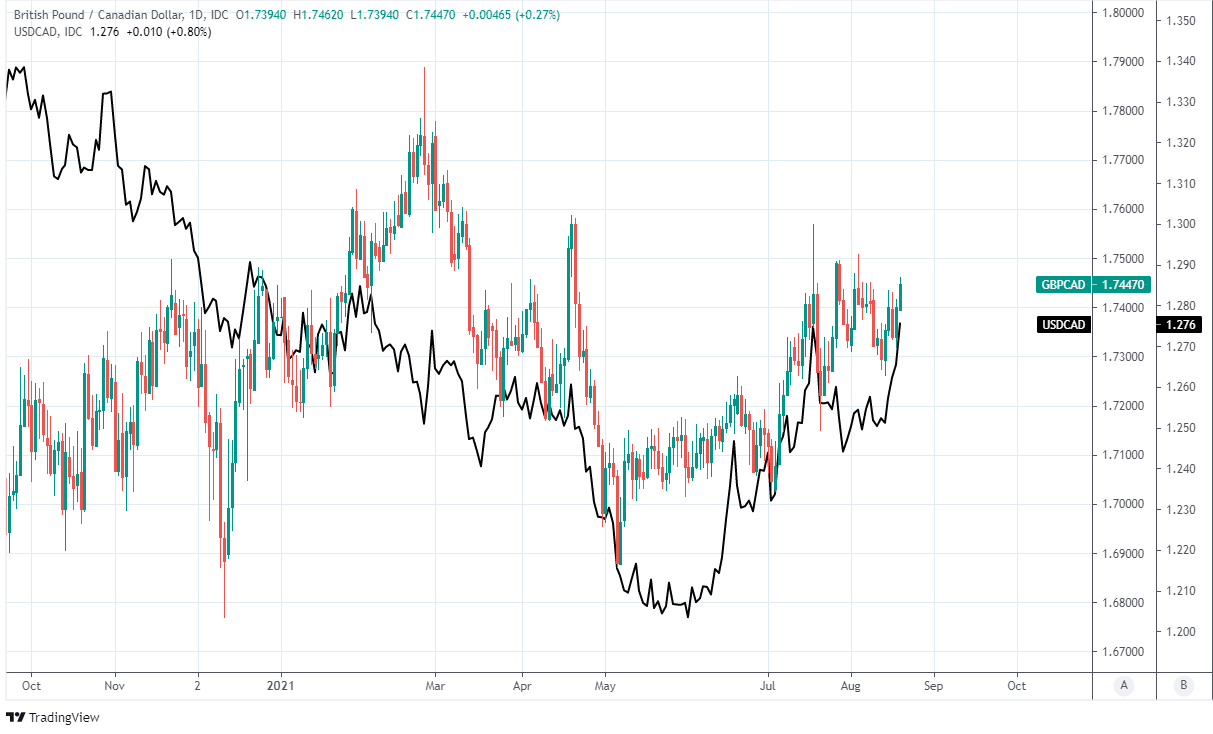 Wednesday’s minutes revealed that a majority of Federal Open Market Committee members were of the view at the July 27-to-28 meeting that if the U.S. economy developed in line with June’s projections in the interim, the necessary economic conditions would be met for the Fed to announce a plan as well as commence the process of winding down its $120BN per month quantitative easing programme before the year is out.

That was something of a surprise to a sizeable number of analysts and other commentators, and evidently the market too given previously-solidifying expectations the bank would announce something in September or November for implementation some time in the New Year.

The U.S. Dollar strengthened across the board as a result, even pushing the main Sterling pair GBP/USD to a 2021 loss alongside the Loonie, leading the greenback to become for at least the time being the best performer in the G10 segment of major currencies for the year-to-date.

“Yesterday’s CPI print surprised to the upside in both headline and core terms but the CAD barely reacted to the print as high price gains are thought to be mostly temporary—for the Bank of Canada, at least. Still, the BoC should remain on track to conclude its QE programme around year-end and markets may soon begin to position more clearly for the bank’s announcement on Sep 8,” says Shaun Osborne, chief FX strategist at Scotiabank.

Thursday’s price action comes after Canadian inflation came back with a bang in July following a benign reading of the consumer price index for June, which has lifted average of the three Bank of Canada measures of inflation to 2.45% and above the BoC’s target.

Price action also comes ahead of the release of retail sales figures for the UK and Canada for July and June respectively on Friday, with the figures relating to a period where both economies are expected to be seeing a strong rebound from earlier economic closures, meaning they could potentially help to put a floor under both Sterling and the Canadian Dollar.

However, if the figures are accompanied by an ebbing of Thursday’s risk aversion then they might be more likely to benefit the Loonie more than Sterling, and as a result would risk prompting a pre-weekend correction lower for a Pound-to-Canadian Dollar rate that was testing the top of a multi-month range between 1.70 and a little over 1.75 on Thursday.

“Daily and weekly trend signals are flat and the cross has held a sideways range (roughly 1.68/1.79) since early 2020. The GBP tracking above the 55-day MA and the bullish implications of the triangle consolidation suggest some scope for the GBP to appreciate but we are not persuaded that the cross is poised to strengthen materially at this point,” says Juan Manuel Herrera, a Scotiabank colleague of Osborne in a Monday note. 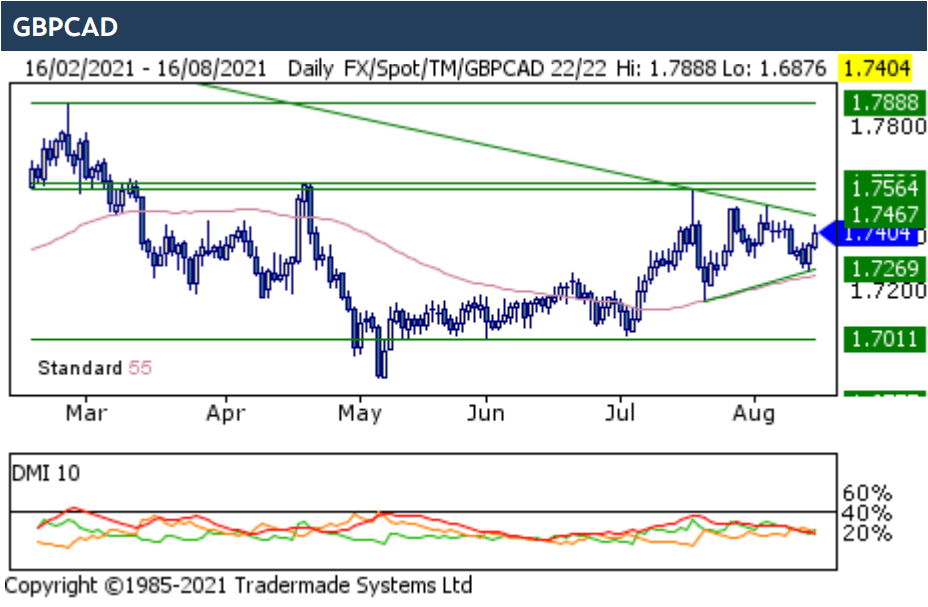 Above: Scotiabank GBP/CAD chart with technical indicators and analysis.