- Election results to set direction for GBP rates into year-end.

- U.S.-China tariff decision is due before Sunday December 15.

The Pound-to-Canadian-Dollar rate closed on a high Friday after a strong weekly performance for Sterling and due to a horror show of a November jobs report from Canada but the looming UK general election could is now set to dominate the week ahead.

Sterling gained over all its major rivals last week, with the only exception being the New Zealand Dollar, as markets became more confident Prime Minister Boris Johnson will win enough support for him to command a parliamentary majority in Thursday's election. And it put in one of the better performances against the Canadian Dollar, which was wounded Friday by a jobs report that saw the unemployment rate rise 40 basis points in a straight line to 5.9% for the month of November.

However, the Pound may be likely to soften early on in the week ahead as doubt creeps in, speculative bids evaporate and as some investors take profits off the table in the wake of strong performance by the British currency since early October. That would be a fairly typical performance for any currency that's just days out from a vote that will have huge economic consequences one way or the other and a time when investors have for weeks been betting in one direction only.

The effect of any softening in Sterling could be magnified in the Pound-to-Loonie rate over coming days by any paring of Friday's Canadian Dollar losses. Friday's Canadian jobs report was bad through and through while the rise in joblessness was about as big as singular moves in unemployment rates can get outside of crises, especially for developed world economies. However, analysts and economists have long referred to Canada's labour market as a 'random number generator', which matters. 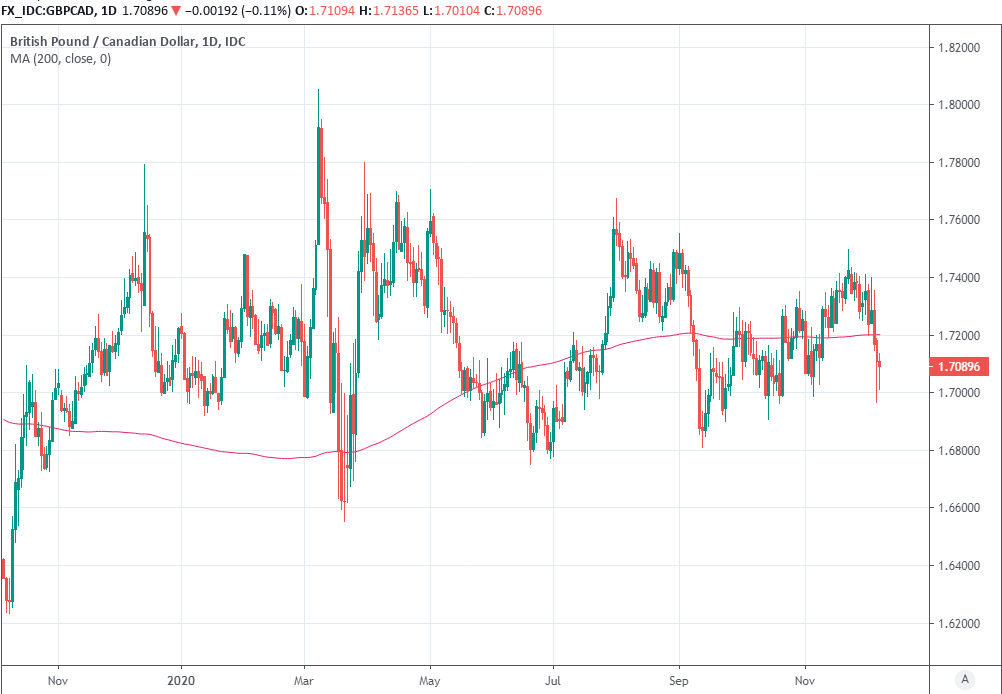 If relief for the Canadian Dollar translates into a falling USD/CAD rate at the same times as the GBP/USD rate is in retreat, then the Pound-to-Canadian-Dollar rate might suffer an almighty hangover in the early stages of the new week. However, and ultimately, it will be the election outcome that should become known in early hours of Friday morning that sets the direction into next weekend and also into 2020.

Scotiabank's Herrera has not ruled out short-term weakness in the Pound-to-Canadian-Dollar rate but is  still looking for the exchange rate to establish a base around its current 1.74 level and to eventually attempt a move up toward 1.78. His analysis underpinning that idea is confined to studies of trends and momentum on the charts rather than polls and Westminster politic, but its conflict with those of fundamental analysts who're taking cues from the politics around the Pound.

Others say the Pound could be in for more gains over the U.S. Dollar once the election is out the way, but also say that such levels should be taken as an invitation to sell.

"The opinion polls have been remarkably stable in showing a consistent gap in favour of the Tories of no less than 10ppts. Spread betting markets suggest this might translate into a 30-seat majority. We see that as sizeable enough to propel the pound further on Thursday night into Friday," says Derek Halpenny, head of research, global markets EMEA and international securities at MUFG.

Halpenny says a Conservative Party election victory this Thursday would likely see the market take Prime Minister Boris Johnson and his withdrawal agreement all that way to the bank in a move that could ultimately take the Pound-Dollar rate back to 1.35. That's a level that MUFG and others have long argued would be achievable if the withdrawal agreements hawked to MPs and the public by both Johnson and Theresa May are ever approved by parliament.

"GBP/USD at or above 1.3500 will be attractive levels to sell post an expected Tory election victory," Halpenny says. "Our MUFG GBP/USD yield model shows the under-valuation divergence from spot has now nearly been fully removed – an indication of a marked reduction in the Brexit risk premium. We view that as unrealistic given the uncertainties that still lie ahead."

The Pound has made strong gains over the Euro and Dollar in recent days, helping make it the second best performing major currency of the last week and providing Sterling with a bullish set-up on the charts although the Thursday general election will doubtlessly dominate the week ahead.

Opinion polls have shown the Conservative Party lead stabilising at around 10% this last week, which is enough to assure a small parliamentary majority according to some pollsters. And on that score, the implied odds of a Conservative majority rose to 72% on the Betfair Exchange last week, the highest level recorded on the exchange since the election campaign began.

However, and with just days to go before the ballot takes place, bitter memories of how former Prime Minister Theresa May converted a strong double-digit polling lead at the beginning of the 2017 campaign into a hung parliament barely more than two years ago could constrain investor appetites for Sterling in the days ahead. Meanwhile, uncertainty over the likely outcome of the vote may also prompt some profit-taking in Pound Sterling trades.

The bottom line is that despite investors, analysts and pundits being happy to wager on a victory for Prime Minister Boris Johnson this week, the Pound may be vulnerable to a downward correction over the coming days as speculative bids for the British currency evaporate and as some investors take profits off the table ahead of the vote.

There is only one meaningful piece of UK economic data due for release this week and that's the initial estimate of October GDP growth that is due out at 09:30 Tuesday. Consensus is looking for a 0.1% increase to reverse and equivalent contraction that was seen in September, the final month of the third quarter in which the economy expanded 0.3%, according to the initial estimate of the Office for National Statistics.

A Johnson victory might see the UK move forward on Brexit and would certainly bar an increasingly radical opposition Labour Party from 10 Downing Street for up to five more years. Currency markets favour a Conservative government.

A part of the market bias comes from a desire among investors to negate the threat of a 'no deal' Brexit and also see the economy move on from the current stage of negotiations, which has paralysed the Bank of England and some businesses, while the rest is centred on fears about the opposition's economic agenda.

The election comes amid fresh signs of weakness in the UK economy as well as at a tense time in the U.S.-China trade talks, which have shrouded the entire global economy in a cloak of uncertainty.  This is after IHS Markit PMIs suggested last week the economy contracted in November and that it might face a decline for the fourth quarter. That would be the second contraction this year.

The Canadian Dollar closed Friday on its back foot amid doubts about whether the Bank of Canada (BoC) is right to be so confident that it's done the right thing by leaving interest rates on hold at their current 1.75% level through this year, which is a question the BoC will have an opportunity to answer in the week ahead.

Canada's economy shed 10k new jobs in November, Statistics Canada says, which pushed the unemployment rate up from 5.5% to 5.9% in one fell swoop. The last time the economy saw such a large swing was in November 2017, when the jobless number collapsed from 6.3% to 5.9%.

Friday's data came just days after the BoC said it sees "nascent evidence" of a stabilisation in the global economy, weakness of which has been a key driver of the bank's caution this year and also of market doubts over whether its sustainable for Canada to continue setting itself apart from the major economy crowd.

And although analysts may be reluctant to throw more than pinch of salt at singular readings produced by Canada's 'random number generator' they'll be sure to scrutinise closely, Wednesday's 17:30 speech from BoC Governor Stephen Poloz on the Canadian economic outlook.

Rather than seeing the CAD rally extend into next week, as seemed likely before the jobs data, we think USDCAD is more likely to hold its recent range. Next week is not especially busy on the data front but, with the holidays looming quickly now, might be the best chance for some decent trading volumes ahead of the New Year," says Shaun Osborne, chief FX strategist at Scotiabank.

Poloz will address The Empire Club of Canada in Toronto on Wednesday and markets will be looking for clues on what, if anything, Friday's jobs numbers will mean for the interest rate outlook. The BoC said last week that future decisions on rates would guided by its "continuing assessment of the adverse impact of trade conflicts against the sources of resilience in the Canadian economy – notably consumer spending and housing activity."

There are no further major economic releases or policy statements in the Canadian calendar for the week ahead, which should the leave the Canadian Dollar to take its cues from Poloz on Wednesday and international factors affecting other currencies including the UK general election, Federal Reserve interest rate decision on Wednesday and the U.S. decision on whether to go ahead with further tariffs on imports from China.

President Donald Trump said on October 11 "we’ve come to a very substantial phase one deal" but since then he's increasingly said only that such a thing "could be reached". If there was even an agreement struck back then there certainly wasn't at the close on Friday and December 15 still marks the date on which tariffs are due to be imposed on all of China's remaining $550 bn odd of annual exports to the U.S.