The Reserve Bank of Australia was a key source of underperformance for the Australian Dollar in 2021, but this will change in 2022 says an International investment bank.

Rabobank - the Dutch based international financial services provider and investment bank - says the Australian labour market is in rude health and wages will rise faster than the RBA has been expecting to date, offering upside to the Australian Dollar.

The call comes following a poor year for the Australian currency that saw it fall from a high of 0.80 against the U.S. Dollar to a December low at 0.6993.

The Pound to Australian Dollar exchange rate meanwhile steadily rose through the year from 1.7416 in early January to a peak at 1.9154.

"One of the major drivers behind the relative softness of the AUD/USD last year was, in our view, the continued dovish position of the RBA," says Jane Foley, Senior FX Strategist at Rabobank.

"Headed into 2022 there is scope for this to change," she says, in an ad-hoc foreign exchange research briefing covering the Australian Dollar.

Foley notes RBA Governor Philip Lowe last year invested a lot of energy in promoting a message that the interest rate outlook in Australia would be linked to that of wage growth.

The RBA's November monetary policy statement showed economists expected wage growth to pick up "only gradually" at a rate of "above 2 per cent" for 2022 and then around 3% for 2023.

Wages are currently still near pre-pandemic levels, but Rabobank sees the prospect for upside surprises in the wage data.

"Assuming that this is the outlook that is priced into the market, the AUD can be expected to find support on stronger than expected wage related data," says Foley.

The pipeline for stronger wage prints is building: the ABS reported on January 12 that Australian job vacancies rose by 18.5% (61,900 vacancies) in the three months to November 2021, putting them 74.2% higher than they were in February 2020. 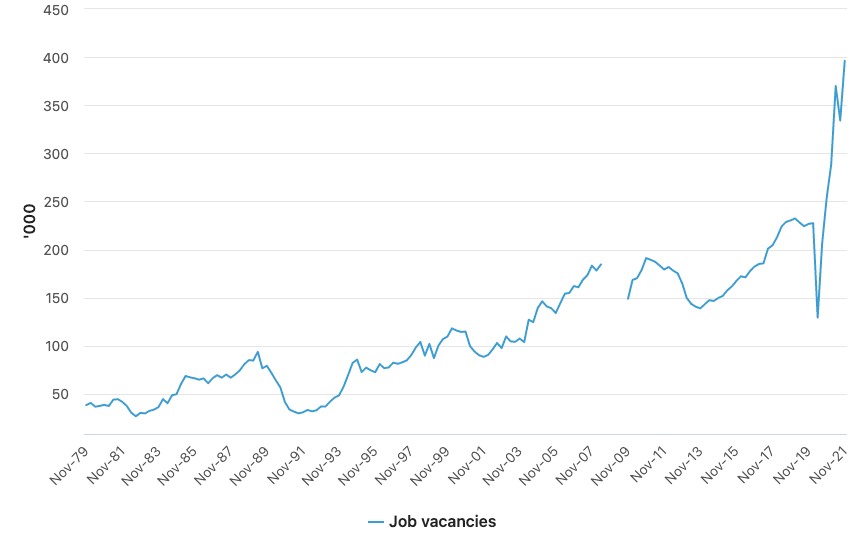 Like other countries, including the UK and the U.S., Australia appears to now be suffering a shortage of labour, with the ABS saying "ongoing high level of vacancies reflects the pace of recovery in labour demand from the fall in May 2020, as well as a number of industries indicating labour shortages, particularly for lower paid jobs".

The U.S. and UK have in turn seen wages rise sharply higher, stoking expectations for higher inflation rates in the future.

The central banks of both countries have warned on the need for higher interest rates: the Pound and U.S. Dollar both outperformed other rivals in 2021 thanks in part to this central bank policy stance.

Could the Australian Dollar be a beneficiary of such a dynamic in 2022?

"Looking ahead, it can be assumed that further evidence of strength in the labour market will trigger expectations regarding scope for a potential positive shift in RBA rhetoric which will underpin the outlook for the AUD," says Foley.