Australian Dollars were sold widely as stock and commodity markets slumped across the globe ahead of the weekend, while safe haven currencies were bought in price action that pushed the Aussie to the bottom of the major currency performance table for last week.

The Aussie’s losses reached almost five percent against the safe-haven Swiss Franc and Japanese Yen while its declines against the U.S. Dollar pulled the main Australian exchange rate AUD/USD beneath a duo of important technical support levels on the charts.

“AUDUSD finally closed below important support at .7106 yesterday, which we look to be sustained into the weekly close to confirm a major long-term top,” says David Sneddon, head of technical analysis at Credit Suisse, writing in a Friday note to clients. 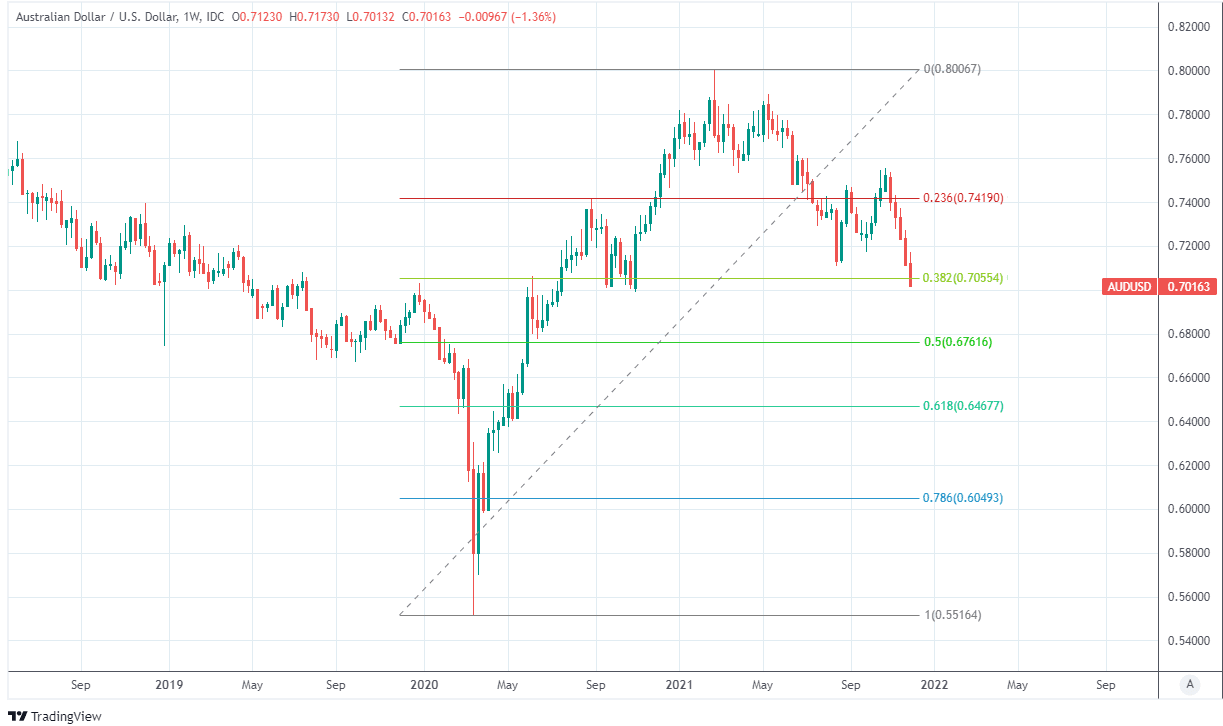 Above: AUD/USD shown at weekly intervals with Fibonacci retracements of 2020 decline.

“Next support is at .7053, which is the 38.2% retracement of the 2020/21 fall, then .6991. Thereafter, we see scope for a fall to .6758 if the top is confirmed, which is very much our base case, given the ongoing deterioration in the trend-following setup,” Sneddon and colleagues also said.

Last week’s losses took the Aussie below major support levels at 0.7106 and 0.7053 ahead of the Friday close and left it testing the round number of 0.70 in what is a bearish development for the medium-term trend, one that could ultimately see the antipodean unit fall as far as 0.6758.

Australian Dollar declines built alongside market concerns about the potential implications of the latest mutated strain of the coronavirus, which has spread rapidly across the globe since it was first detected in late November, and amid an ongoing Federal Reserve-driven rally in the U.S. Dollar.

“It is likely to be difficult for AUD/USD to rally very far in the next 10-14 days, given the expectations for the 15 Dec FOMC decision in the wake of Fed Chair Powell’s hawkish shift and the anxious wait for hard evidence on the efficacy of existing Covid-19 vaccines against the Omicron variant,” says Sean Callow, a Sydney based FX strategist at Westpac.

With market unease about the new virus strain to one side, U.S. Dollars have been in demand and AUD/USD under pressure due to the seemingly mounting prospect of a December Fed decision to speed up the pace at which its quantitative easing programme is wound down.

The latter was all but confirmed as a likelihood by Fed Chairman Jerome Powell in testimony to congress last week, who cited the risk of more persistent above-target inflation pressures for an emerging Federal Open Market Committee consensus in favour of a faster pace of monetary policy normalisation.

The Australian Dollar entered the new week near to 0.70 on the nose and could be in need of a hawkish surprise from Tuesday’s Reserve Bank of Australia (RBA) monetary policy decision.

Such a surprise could be an incremental tapering of the bank’s quantitative easing programme, in order to avoid further losses over the coming days.

“It is possible the RBA will provide some guidance on tapering next week, but it is more likely they wait until their scheduled February review to announce any changes to the Bond Purchase Program considering the focus on upcoming data. We expect a cut in bond purchases to AUD2bn week in February, if not more,”says Micaela Fuchila, an economist at BofA Global Research.

The RBA said in November it would continue buying at least A$4BN of government bonds per week as part of its bid to support the Australian economy through the pandemic and warned markets that it would likely be the end of 2023 at the earliest before the bank’s 0.10% cash rate is lifted from its current historic low.

This threatens to leave the bank trailing behind other major economy counterparts in the policy normalisation process.

It has contributed to the Australian Dollar being one of the worst performing major currencies of 2021.

"The contrast with the Fed over the coming months will keep downward pressure on AUD/USD. AUD/USD is now down 8.25% year-to-date and at these levels is beginning to look stretched. However, with such a stark monetary stance, there is scope for some further downside over the short-term," says Lee Hardman, a currency analyst at MUFG, writing in a Friday research note.