The Pound-to-Australian Dollar exchange rate starts the new week higher, although the Reserve Bank of Australia's Tuesday policy meeting will likely set the tone for the remainder of the week.

Heading into the RBA announcement - due at 04.30 BST - the Australian Dollar looks to have a short-term advantage over Sterling, having advanced by a percent last week.

The decline is actually an extension of the losses that first began on August 20 when a broad based sell-off in the Aussie ended and there is little in the charts that suggests any substantive rebound is in the offing. 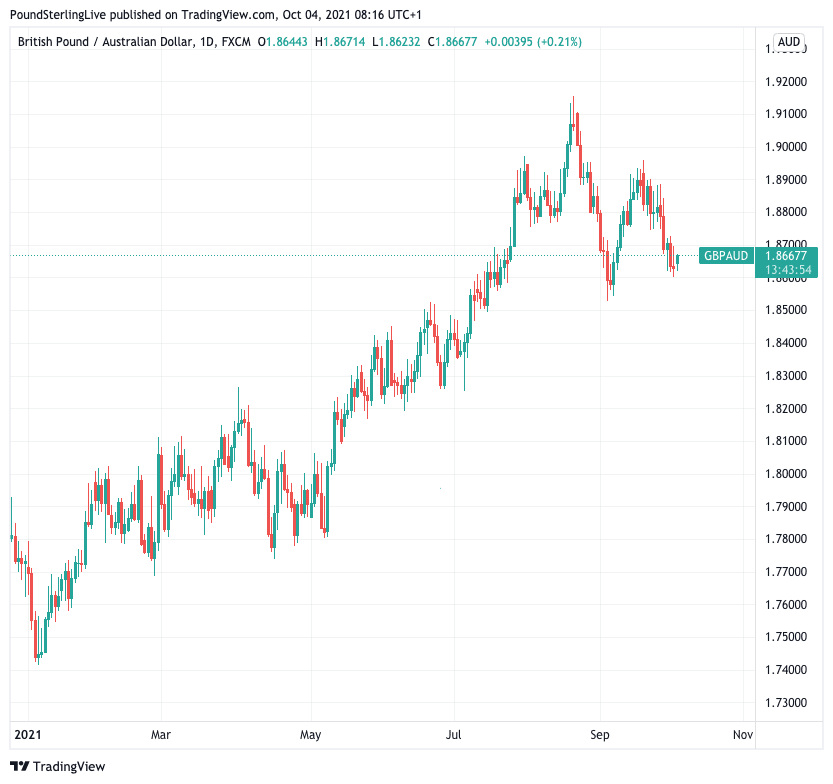 Australia's top three exports are: iron ore (21%), coal (11.5%) and natural gas (10%), the two energy exports in this top-three basket are of particular interest at present given the intense bidding war for natural gas between Europe and Asia.

China is meanwhile facing a power crisis amidst its own coal shortages, a situation that has come in part owing to the banning of Australian thermal coal purchases by authorities there.

Reports suggest the Chinese won't budge on their stance but it was reported last week that India is buying the Australian coal that’s been stranded inside China for months.

The net result? Prices for Australia’s Newcastle coal, considered an Asian benchmark, have surged close to a record.

The energy crisis will ensure Australia's terms of trade remains in rude health and this will provide a fundamental source of support for the Australian Dollar, regardless of the domestic slowdown caused by Covid.

The most recent data available showed Australia's trade surplus widened to a record in July as exports of iron ore, coal and liquefied natural gas all rose strongly, a trend that will have only accelerated over recent weeks.

Above: Australia's trade balance is only growing in strength.

It is amidst this backdrop that the RBA will provide its latest guidance on the path for interest rates and quantitative easing.

If correct, further "short covering" - whereby the Aussie is bought to cover previous bets against the currency - could put further downside pressure on the Pound-Australian Dollar exchange rate.

The domestic Covid situation has steadily faded as a concern for the foreign exchange market, judging that the country's steady vaccination rate will allow for a more sustained reopening later in October.

Marshall Gittler, Head of Investment Research at BDSwiss Group, says the RBA should feel comfortable repeating its assessment in the minutes of the last meeting that the outbreak has "delayed, but not derailed" the recovery.

"That suggests no further action to support the economy is likely to be forthcoming," says Gittler.

However, Gittler is not a buyer of the Australian currency saying he expects the RBA to be at the back of the queue when it comes to policy normalisation, i.e. raising interest rates again.

"I expect them to keep policy steady, which may cause AUD to decline somewhat on the 'monetary policy divergence' theme," he says.