- AUD sees some near-term gains amid Asian currency bounce
- Forecasters suggest AUD/USD recovery a way away
- AUD/GBP slip to 0.52 could lift GBP/AUD up to 1.92

Australia's Dollar was on the back foot in the penultimate session of the week but had risen against currencies of most Australian trade partners for the week overall in a sign it could be bottoming after a lengthy run of losses, although many forecasts suggest a recovery remains some way off.

The Australian Dollar was lower against a majority of its major counterparts on Thursday amid strength in the U.S. Dollar, a mixed performance from commodities and widespread yet only limited declines for global stock markets.

But the opposite is true when Australian exchange rate performances are taken into account for the week overall, especially when the Aussie is measured in trade-weighted terms or against the currencies of Australia’s major trade partner economies.

Australia’s Dollar has advanced this week against all in that grouping other than the Euro and around half of the Asian currencies featured in the Reserve Bank of Australia (RBA) trade-weighted index (TWI), while the pace of Aussie Dollar losses had already slowed over the last month.

“We are poised at the flipping point in many of the recent trends, in which the coming couple of sessions determine whether these trends are neutralized or reconfirmed – for example, the weak AUD and other commodity currency and GBP trends, and the stronger USD, JPY and CHF trends,” says John Hardy, head of FX strategy at Saxo Bank.

The earlier slowing pace of the Australian Dollar’s declines and its bounce through the recent week could be taken as a sign that the Antipodean currency is in the process of stabilising following months of heavy declines that had multiple drivers.

But whether this newfound stability endures will depend as much on the trajectory of the U.S. Dollar as it does developments on the ground in Australia, where a coronavirus-inspired ‘lockdown’ and other containment efforts risk being prolonged into the final quarter.

“In our view, USD strength reflects the combination of monetary policy divergence (Fed preparing to taper as the US labor market recovery extends amid inflationary pressure), as well as a softening in commodity prices and an uptick in global risk aversion, both symptomatic of the recent global growth slowdown,” says John Shin, a strategist at BofA Global Research.

“Commodities have weakened and risk aversion has risen as the global economy decelerates, which has supported the dollar's recent sharp appreciation against higher beta FX as well,” Shin writes in a research note this week.

BofA Global Research had looked for AUD/USD to recover to 0.76 by the end of September but cited global growth concerns and Federal Reserve policy this week for a downgrade of that projection to 0.73, which implies only limited scope for an Australian Dollar recovery over the coming weeks.

AUD/USD recaptured the 0.72 handle this week and was trading around 0.7250 on Thursday having fallen as low as 0.7103 last week, although at best analysts project little better than stability for the antipoden in the weeks ahead, and many forecasts suggest fresh losses are only a matter of time.

“In mid-July, we revised lower our year-end forecast for AUD/USD to 0.72 based on expectations of a stronger USD and that the RBA would be a laggard on policy tightening. The worsening news surrounding the AUD has already taken the currency pair below that level. We are subsequently lowering our AUD/USD forecasts further,” says Jane Foley, head of FX strategy at Rabobank.

“We see risk of further weakness in the currency pair towards 0.70 on a 1 to 3 mth view before a recovery in the AUD sets in next year,” Foley adds.

Foley and the Rabobank team cite market fears for the global economy connected to the coronavirus, the resulting strength in the U.S. Dollar as well as potential implications for RBA policy stemming from Australia’s own plight at the hands of the virus for expecting AUD/USD to slip further into year-end.

Rabobank's forecasts also warn of a Pound-to-Australian Dollar rally to 1.95 over the coming month, and flag scope for further increases as far as 1.99 during the final quarter.

Minutes of the RBA’s August meeting revealed earlier this month that the bank is prepared to scrap an earlier decision to begin reducing from September the amount of monetary support provided to the economy through its quantitative easing programme if the economic outlook worsened.

This was after surprising the market with a decision on August 03 to go ahead with an earlier agreed tapering process despite key parts of the national economy having been returned to ‘lockdown’ during the prior month, although at the time the connected closures were expected to be short-lived and RBA officials have repeatedly voiced conviction that the economy is likely to rebound quickly once containment measures end.

Since then however, the various state level shutdowns have been extended and the federal as well as regional governments have indicated that reopening and any easing of other restrictions will be tied to milestones for progress in rolling out the country’s vaccination programme.

“The US$ pullback has given the Aussie a reprieve but it may not have far to run. The steady drip of grim local lockdown news and sound US$ fundamentals suggests more time with the 0.71 handle than 0.72,” says Sean Callow, a senior FX strategist at Westpac in Sydney.

Above: AUD/USD shown at daily intervals alongside Pound-Australian Dollar rate.

Whether or not the RBA does go ahead in September with the planned reduction from A$5BN to A4BN in the amount of government bonds it buys each week in support of the local economy could be an important signal for the Aussie Dollar outlook and determinant of short-term price action.

The RBA’s next monetary policy decision is out in the early hours of Tuesday 07 September and will be scrutinised closely by the Australian Dollar, with potential implications for the Pound-to-Australian Dollar rate also, which Westpac sees having scope to rise to a little over 1.92 in the weeks ahead.

“The RBA’s cash rate guidance of no move until at least 2024 is more dovish than the BoE’s, supporting the pound. Near term the Aussie will also find little support from domestic conditions as lockdowns stretch on. But late Q3 and early Q4, conversion of huge mining company dividends should help A$ crosses recover,” Callow writes in a Thursday note. “Domestic headlines in the week ahead seem highly unlikely to provide support for the Aussie.”

Callow and the Westpac team forecast a recovery for the Australian Dollar from the final quarter of this year, but see AUD/USD risking a slide to 0.70 in the short-term and the AUD/GBP exchange rate as vulnerable to further losses that could take it as far as 0.52 this month and next. 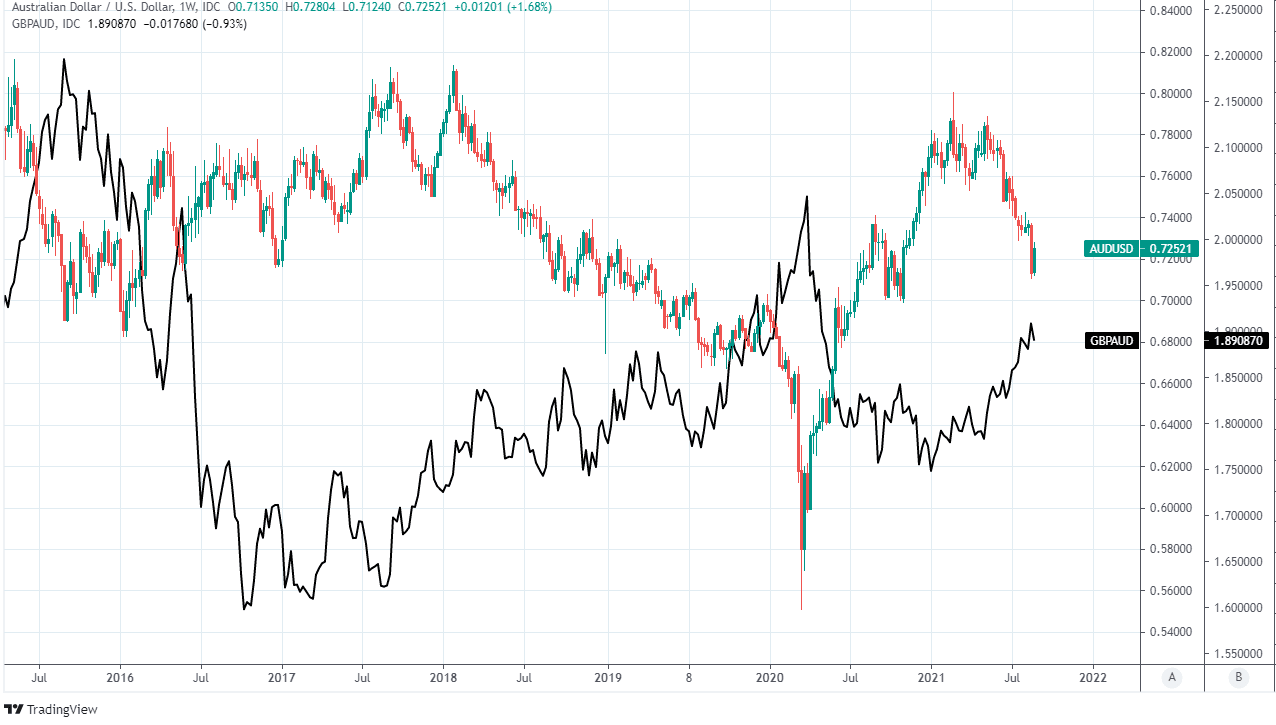 Above: AUD/USD shown at weekly intervals alongside Pound-Australian Dollar rate.