The Pound is forecast to lose further ground to the Australian Dollar, with momentum studies of the charts confirming the Aussie Dollar is favoured over its British counterpart.

The Pound-to-Australian Dollar exchange rate fell 1.53% in the first week of the new year as the Pound was beset by the announcement of a new lockdown to slow the spread of covid-19 and the Australian Dollar rode the tail strings of a global equity and commodity market bounce.

As a result, the exchange rate remains trapped below its 50 day moving average - which is at 1.7918 - suggesting the medium-term (multi-week) outlook is likely to see further softness.

Only a break above the 50-day moving average would invalidate the view that the Aussie Dollar is preferred as such an occurrence would signal a substantive shift in momentum back towards the Pound is underway in the market. 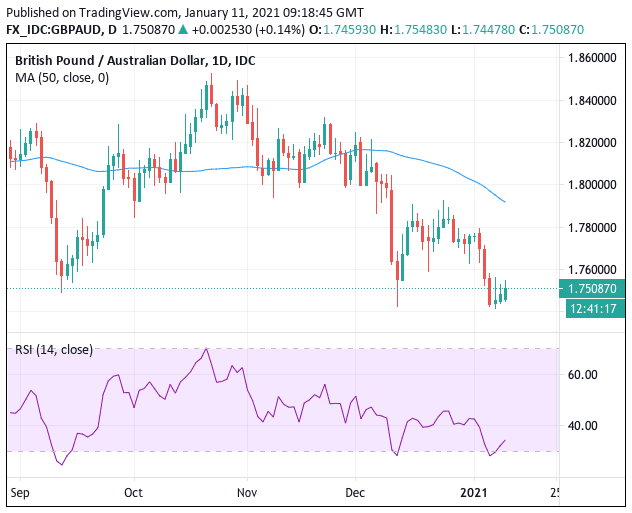 Momentum as measured by the Relative Strength Index (RSI) is also negative and therefore advocates further losses by Sterling against the Australian Dollar. A reading of 34.50 (bottom pane in above chart) is consistent with further downside.

The RSI had reached overbought conditions last week following the sharp decline in the GBP/AUD exchange rate in the opening days of 2021, but this oversold signal was unwound following the stabilisation in the exchange rate towards the second half of the previous week.

The Australian Dollar remains one of the foreign exchange market's leading beneficiaries of the so-called reflation trade that has gripped markets over recent months; a trade driven by an expectation amongst investors for the global economy to enter a strong recovery phase in 2021.

This has contributed to higher commodity and equity prices, conditions that traditionally contribute to a stronger Australian Dollar.

Should the trend extend, as is expected by most analysts we follow, then the Australian Dollar can extend gains against the likes of the Pound, Euro and U.S. Dollar over coming months.

"Risk-related reflation trades – equities and commodities – can continue to push higher as markets continue to price in further potential for stimulus after the U.S. Georgia Senate election surprise and positioning is not yet crowded," says Kurran Tailor, an analyst at Citi.

President-elect Joe Biden said on Friday his administration could boost stimulus payments to $2,000, extending unemployment insurance and billions in aid to city and state governments.

"The price tag will be high," he said, "the overwhelming consensus among leading economists left, right and center is that in order to keep the economy from collapsing this year, getting much, much worse, we should be investing significant amounts of money right now."

Global markets have however started the new week on a softer footing, amidst some negative developments that have prompted investors to book recent profits and opt to hold cash.

Of particular concern from an Australian Dollar angle is news of rising covid-19 cases in China's Hebei province. Authorities last week reintroduced stricter conditions on the movement of people in the province, and investors will be watching to see how the outbreak progresses.

A more severe lockdown in China could well knock some wind out of the rally in commodities in particular, which would in turn likely contribute to a weaker Aussie Dollar.

Hebei accounted for 82 of the 85 new local infections reported on Jan. 10, the National Health Commission said in a statement, with Liaoning Province also reporting two new cases and Beijing reporting one new case.

Cases remain low, but a risk is that an acceleration of the outbreak in Hebei or elsewhere could prompt a more meaningful lockdown, which in turn negatively impacts economic growth and broader investor sentiment.

A setback to the global reflation trade is another key risk to the bullish Australian Dollar stance adopted by markets.

"Financial markets are betting that the deployment of Corona vaccines will bring a return to economic 'normalcy' in 2021 even though the virus is spreading rapidly at the moment undermining mobility and triggering more lockdowns world-wide. We share the optimism, but it would be foolish not to consider the risks," says Bernhard Eschweiler, Senior Economist at QCAM Currency Asset Management AG.

One risk QCAM see is that the vaccines fail in medical terms, "this is not impossible but not a serious risk in our view. Bigger is the risk that the deployment is slower than expected and that not enough people are vaccinated by the third quarter before the fall and winter season starts again. The consequences would be catastrophic for health systems and cause economic and financial stress," says Eschweiler.

QCAM see the probability of the vaccination being too slow is 10%-to-15%. "That is not huge, but should be enough to temper current market euphoria," says Eschweiler.